Fungal urinary tract infections (FUTI) are mainly caused by Candida species. The urine can be an important specimen for the diagnosis of this kind of clinical condition since both the presence of fungi can be identified by urine microscopy and by uroculture and the cells that promotes the immune response against this kind of infectious agent can also be observed. This entry will focus on information related to FUTI and the urinary findings that can be detected during routine urinalysis that can contribute to the identification of this clinical condition.

Fungi are pathogenic agents that can also cause disseminated infections involving the kidneys. Besides Candida, other agents, such as Cryptococcus spp., can cause UTIs. Non-yeast fungi, like some members of the Aspergillus, Mucorales, Blastomyces, and Histoplasma families, can also cause infections, especially among immunocompromised patients[1]. The detection and identification of fungi in urine samples (by microscopy and culture) plays an essential role in the diagnosis of fungal UTI. Leukocyturia is a cardinal sign of UTI caused both by bacteria or fungi[2][3] and also is a key sign of the immune response occurring in the urinary tract when the organism faces an UTI. This work explains the urinary findings and clinical picture of patients with fungal UTI caused by Candida spp. and some aspects related to the immune response in fungal UTI, in addition to urinalysis perspectives in this clinical condition.

Urinary infections by Candida (usually asymptomatic) are caused by either the ascending or the hematogenous routes. By the ascending route, fungi are suggestively derived from the perineum, spreading into the bladder and then leading to colonization (it can occur into the collecting system of the kidneys)[1][4][5]. The ascending infection of the upper urinary tract is rare, and the risk increases with obstruction of it, diabetes mellitus, or urinary reflux [4][5]. The yeasts adhere to endothelial or urothelial cells, colonize the local area, evade the immune response, and, lastly, invade tissue or disseminate to distant sites within the body. The presence of an indwelling catheter allows biofilm formation and the persistence of the organism[1][6]. On the other hand, the hematogenous route is the way that the most kidney infection occurs in physiological state. Candida penetrates in the proximal tubules after passing by glomeruli and is eliminated in urine within weeks. Autopsy studies have noted renal cortical micro abscesses in most patients who have died of invasive candidiasis[1][7].

3. Definition and Diagnosis of Candiduria and UTI Caused by Candida spp.

The definition of candiduria is enigmatic. Although most studies rely on culture, both urine microscopic visualization and culture of urine could be employed. Of concern is that neither the diagnostic criterion of colony forming unity (CFU) cutoff nor the collection technique (suprapubic aspiration versus bag collection) for neonatal urinary candidiasis is standardized. Even in adults, CFU criteria to diagnose candiduria range from 103 to 105 CFU/mL. In some studies, candiduria is even differentially defined for women and men[7][12]. In addition, in most retrospective studies, standard urine cultures were screened for candiduria, which means that urine was cultured on MacConkey and blood agar only[13]. Some laboratories have realized the urine cultures on Uriselect agar, which is a chromogenic agar that allows the preliminary perform identification of predominantly bacterial uropathogens [7][13]. Although these culture methods are certainly sufficient to identify bacteria, they may be significantly less sensitive to recover C. albicans and non-C. albicans species. Consistent with this concern, prospective studies in which urine was cultured on Sabouraud dextrose (SD) agar, a standard fungal medium, have reported higher numbers of non-C. albicans species[7][14][15]. It is noteworthy that the fungal burden could be relevant, because a statistically significant correlation between heavy candiduria (>104 CFU/mL urine) and a high Pittet Candida colonization index (>0.5) has been established[7][16]. In summary, variable cutoff definitions and unreliable culture techniques may skew analysis of the incidence and outcome of candiduria. These discrepancies have not been adequately addressed in most studies[7].

Urine examination plays a key role in the identification of fungal UTI. Two very basic tests can be cited here: Urine sediment analysis and urine culture. This review focused on the urine sediment analysis a test that strongly contributes to the detection of fungal UTI, because both yeasts and pseudohyphae are easily identified on direct examination of the sample between slide and cover slide[3][4]. Also, urine markers of an immune response (leukocytes), urine barriers of tissue protection (epithelial cells: squamous, transitional, and renal tubular), and urine markers of kidney disease (urinary casts) can be found in urine samples.

Yeasts (Figure 1) are observed, without the necessity of any special stain, usually at 400× magnification, as pale-green cells with smooth and well-defined walls. The nucleus can sometimes be seen, and the cytoplasm is homogenous without apparent organelles. Usually, the shape of the yeast cells is ovoid, spherical, or elongated. If urine stands for long periods at the bench, abundant pseudohyphae (Figure 2) can be seen[17]. In an infection condition, yeasts in urine may reflect invasive fungal infection, which may cause urethritis, cystitis, or renal infection. In renal infections caused by yeasts, casts containing these structures can be observed. Certain clinical conditions are more frequently linked to fungal UTI, such as diabetes mellitus, structural abnormalities of the urinary tract, indwelling catheters, prolonged antibiotic treatment, or immunosuppression[4]. The casts containing fungi are structures that deserve attention. Urinary casts are unique structures, exclusively produced within the tubular lumen under some circumstances (e.g., low intratubular pH, high osmolality, and high sodium concentration). Urinary casts can have several structures attached to their proteinaceous matrix: Erythrocytes, leukocytes, renal tubular epithelial cells, lipids, bacteria, and fungi. In fact, any structure passing through the tubular lumen during the formation of the cast can be attached to the Tamm-Horsfall fibrils (that forms the cast), and when the cell or microorganisms are seen within an urinary cast, they are a clue to the presence/passage of this cell or microorganism within/through the kidneys[3][4][18].  Not only Candida spp. yeasts were observed within casts[18], but Cryptococcus spp. (Figure 3) were already reported[19], helping in the identification of fungal UTI caused by this pathogenic agent particularly important to immunocompromised patients. Detection of renal Candida casts may be a useful diagnostic marker in distinguishing upper versus lower urinary tract candidiasis. 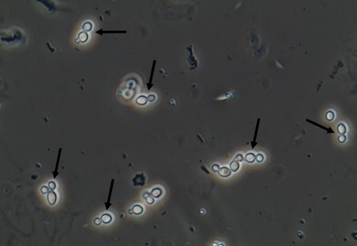 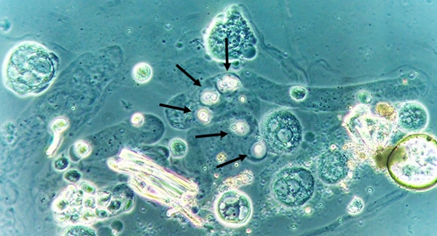 Due to the nature of the infectious process, leukocytes (granulocytes, particularly neutrophils) (Figure 4) are easily observed in the urine sediment where fungal structures are found. They can be observed in small numbers or in large amounts. Sometimes, they can be observed trying to perform phagocytosis of pseudohyphae (Figure 5). They can reflect an infectious/inflammatory process[3][4].

Macrophages are efficient phagocytes and were already reported engulfing yeast in urine sediment samples (Figure 6)[20]. Macrophages can appear on urine samples due to inflammation/infection of any tissue from the urinary tract, from the kidneys to the urethra. Thus, the finding of macrophages in urine samples and even macrophages with fungal particles engulfed only reflects the function of this kind of cell in the genitourinary tract[20]. 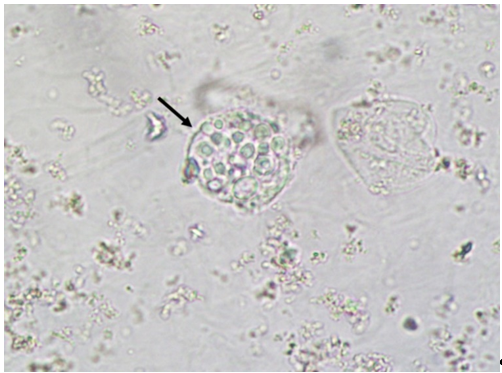 Epithelial cells are a very important component of the body’s defensive system, since they are the first barrier to block the pathogenic agents to enter and cause infection.

Squamous epithelial cells (Figure 7) compose the first layer of defense where the mucosa is present, such as, for example, the urethra. This type of cell is permanently renewed and, if the patient does not perform adequate hygiene before the urine sample collection, a large number of this cell type will be observed in urine sediment. This is important to mention because they are also present in the vagina and any part covered with mucosa. Their finding in large numbers in the sample is a clear sign of an inappropriate sample collection procedure. It is not considered a pathological finding, since bodies continuing to replace it to keep the epithelial barrier in full action [3][4]. 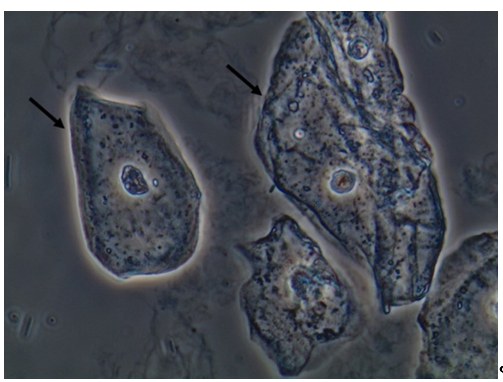 It is important to mention that yeast cells observed in urine sediment can present a morphological resemblance with erythrocytes, lipid droplets, calcium oxalate monohydrate crystals, and, especially, acanthocytes (a particular type of dysmorphic erythrocytes that presents blebs protruding from the cell membrane due to the passage through the glomerulus and tubular system) (Figure 8). Professionals performing the microscopic evaluation of urine sediments need to receive proper training and use good-quality microscopes to avoid misidentification of these particles[21]. Indeed, bacteria can be found deformed in urine sediment, presenting elongated, thin, and filamentous forms, sometimes with a swollen and ball-like part of each bacteria, called spheroplasts (Figure 9). These spheroplasts can be seen after the use β-lactamic antibiotics[22]. Both filamentous forms and spheroplasts usually are seen with sizes much larger than bacteria usually presents, potentially leading to misidentification of these bacterial-deformed forms as fungal structures. 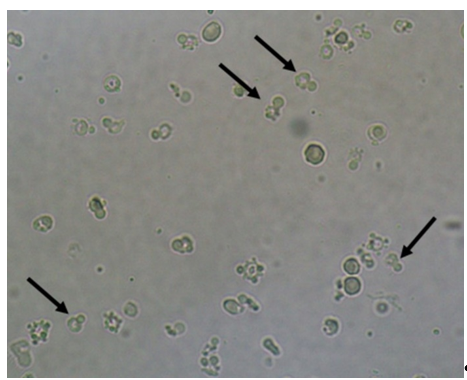 In the fungal UTI, the urine sediment examination should present, basically, yeasts and/or pseudohyphae besides leukocytes. Immune cells (macrophages or neutrophils), performing phagocytosis of urinary fungal particles and casts containing fungi, are possible, but are an extremely rare microscopic finding. Erythrocytes, renal tubular epithelial cells  and urinary casts can be observed if the fungal UTI (or other related clinical conditions that can happen concomitantly with the fungal UTI) leads the patient to a more aggressive injury in the renal tissue. These findings can be linked to the loss of kidney function[3][4].

The urinary finding of yeasts and pseudohyphae can be a clue to the identification of fungal UTI. Surely, this is the main information that suggests whether the urine sediment can contribute to this kind of clinical condition. Indeed, the test is easy and fast to perform, and the fungal structures are easy to observe under the microscope. Fungal structures in the urine sediment can be used as a clinical sign of fungal UTI but should not be overinterpreted. The observation of yeasts and pseudohyphae can also be due to sample contamination, mainly when the sample is improperly collected.

The main difficulty of the interpretation of the fungal structures observation in the urine sediment is the fact that this finding can be both a structure with diagnostic value and a sample contaminant. Also, there is no information in the literature that has properly defined the differentiation between these antagonic situations.