The large intestine consists of ascending, transverse, descending, sigmoidal colon and the rectum. The wall of the large intestine can be divided into four anatomically distinct layers (from inner to outer): mucosa, submucosa, muscularis propria (inner circular and outer longitudinal layers), and serosa. Its major physiological functions include absorbing water, moving waste residue down the GI tract, and temporary fecal storage, all of which involve mechanical movement and deformation of the tubular gastrointestinal structure. The biomechanics of the large intestinal tissue plays a key role in those aforementioned physiological functions in both health and disease.  In addition, chronic visceral pain from the colon and rectum has a prominent mechanical component – it is mechanical distension, not heating, pinching, cutting, or inflammation that reliably evokes pain from hollow visceral organs. The structure and function of the large intestine is systematically summarized below with a particular focus on the heterogeneous biomechanical properties at different sub-layers of the intestinal wall.

The large intestine refers to the segment of the gastrointestinal (GI) tract distal from the Ileocecal valve to the anal verge, consisting of ascending, transverse, descending, sigmoidal colon and the rectum. The physiological functions of the large intestine include absorbing water, moving waste residue down the GI tract, and temporary fecal storage, all of which involve mechanical movement and deformation of the tubular GI structure. Pathophysiological conditions in the large intestine are often associated with the malfunction of intestinal biomechanics, including changes in gut motility and muscle activities (e.g., irritable bowel syndrome [IBS] [1], chronic constipation [2], Hirschsprung’s Disease [3], intestinal neuronal dysplasia [4]), changes in tissue structure and compliance (e.g., inflammatory bowel disease [5], diverticula diseases [6], intestinal tuberculosis [7]), luminal shear flow (e.g., chronic idiopathic diarrhea [8]), and voluntary muscle controls (e.g., fecal incontinence [9]). In addition, chronic visceral pain from the colon and rectum has a prominent mechanical component—it is mechanical distension, not heating, pinching, cutting, or inflammation that reliably evokes pain from hollow visceral organs [10]. Motivated by providing a further mechanistic understanding of those disease conditions, the biomechanics of the large intestine, especially the colon and rectum has been under investigation since the 1970s (e.g.,[11][12][13][14][15]).

The wall of the large intestine can be divided into four anatomically distinct layers (from inner to outer): mucosa, submucosa, muscularis propria (inner circular and outer longitudinal layers), and serosa. Nonetheless, most studies did not consider this through-thickness heterogeneity when characterizing the macroscopic biomechanics of the colon and rectum. An array of conventional mechanical testing methods have been applied to characterize the macroscopic mechanical features of the large intestine, including uniaxial tensile stretch [16][17][18], biaxial tensile stretch [19][20][21], planar compression [22][23], indentation [24][25], shear [22], and luminal inflation [26][27][28][29]. Overall, the mechanical response of the large intestine is governed by the geometrical (large strains in vivo) and material nonlinearities of the tissue with its embedded bundles of collagen and muscle fibers. The tangential stiffness, i.e., the slope of the stress–strain curve increases almost exponentially with increasing strain in the physiologically relevant loading range, indicating gradual recruitment of embedded fibers with progressive deformation. Mechanically, the large intestine is anisotropic (e.g., stiffer in the longitudinal direction than in circumferential direction [20]), viscoelastic [30], and contractile [31]. Only two studies conducted mechanical tests on the large intestine, considering it as a layered biological structure [20][32], and these indicate that the mechanical strength of the tissue is mainly determined by the submucosa and muscular layers whereas serosa and mucosa have no significant stiffness.

The microscale mechanics of the large intestine can correlate to the content and morphology of collagen and muscle fibers within the wall tissue, which provides structural support to almost all soft biological tissues [33]. Intestinal collagen fibers were classically determined by chromatic or antibody-based staining, which was usually limited to thin tissue sections (e.g., [34][35][36][37]). Recent advances in multiphoton microscopy allowed imaging collagen fibers by second harmonic generation, i.e., a nonlinear, label-free imaging modality that allows precise and selective detection of collagen fibers deep into soft biological tissues [38]. The microstructures of the collagen fibers in sublayers of the intestinal wall collectively inform the macroscopic mechanical behaviors in bulk intestinal tissues. In addition, the network of collagen fibers determines the local mechanical environment, which could profoundly impact the neuronal tissues embedded in the intestinal wall (e.g., [39]). Both intrinsic and extrinsic neurons in the intestine play critical roles in the aforementioned mechanical events, including gut motility [40], muscle activities [41], and mechanotransduction [10]. It is worth mentioning that nerve endings are concentrated in the submucosa and muscular layers [40][42], which are the main load-bearing structures of the intestinal wall [20][32]. Hence, determining the micromechanics of the large intestine, especially its interplay with intestinal neuronal tissues will likely advance our understanding of the biomechanical factors in physiological and pathophysiological conditions in the large intestine.

Many GI disorders in the large intestine are poorly managed in the clinics. Especially, chronic visceral pain is the cardinal complaint of patients with IBS that affects up to 20% of the U.S [43]. population. Despite its prevalence, managing IBS-related visceral pain remains an unmet clinical need. The intestinal biomechanics plays critical roles in driving noxious perception from the large bowel. Hence, to further advance the mechanistic understanding of various GI disorders, especially visceral pain, we have conducted this timely and comprehensive review to summarize the experimental evidence on macroscopic and microscopic biomechanics of the large intestine.

2. The Layered Structure and Function of Large Intestine

The large intestine extends approximately 150 to 180 cm in adults and consists of mostly the colon and rectum. Compared to the small intestine, the colon is larger in diameter, mainly fixed in position, and plays a very limited role in nutrient absorption. The main functions of the colon are to push the waste content down the GI tract by coordinated wave-like mechanical movement (peristalsis), absorb water to form solid feces, and send them to the rectum, which is the distal six inches of the GI tract. The large intestine is also host to a significant amount of bacteria, archaea and fungi, i.e., the intestinal microbiota, which perform a host of useful functions such as fermenting unused energy substrates, training the immune system, and producing vitamins and hormones, etc. The rectum’s main functions are continence and defecation, i.e., temporarily storing feces and expelling feces out of the body, respectively. As shown in Figure 1, the large intestine comprises four main layers: mucosa, submucosa, muscularis propria (longitudinal and circumferential muscle layers), and serosa. Each layer has distinct anatomical structures and neuronal tissue contents and consequently serves different biomechanical role in intestinal physiology and pathophysiology. We briefly review this layered anatomic structure of the large intestine as follows. 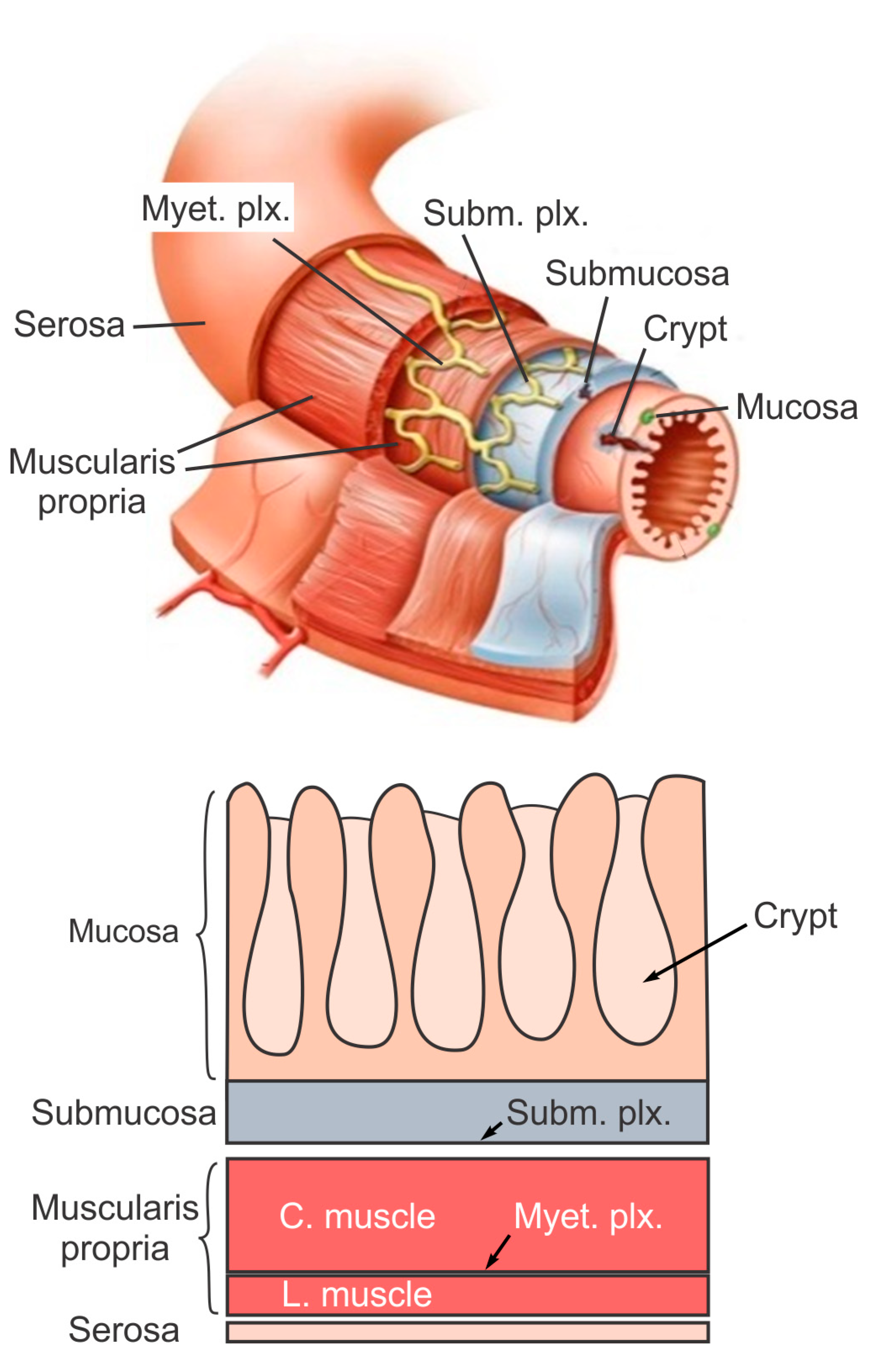 The mucosa is the inner lining of the colon and rectum, consisting of a thin layer of epithelium, a connective tissue layer (i.e., lamina propria), and a thin layer of muscle (muscularis mucosa). Lack of a prominent role for nutrient absorption by the large intestine has resulted in the absence of the villi structure in the mucosa, i.e., small, folded components that greatly enhance the intraluminal surface area of the small intestine. The epithelium in the large intestine “sinks” into large cylindrical structures, i.e., the crypts (Figure 1) that extend through the lamina propria to the muscularis mucosa. Due to the enhanced surface area by the crypts, the epithelium in the large intestine is the largest epithelial barrier of the body [45], where the secretory and absorptive processes (mostly water) take place [46]. Sensory nerve endings extend to the laminal propria between the crypts and act as “taste buds” of the gut to survey the mucosal contents [47].

The submucosa is a fibrous connective tissue layer that surrounds the mucosa. It contains major branches of blood and lymph vessels supplying the large intestine. It has a high concentration of lymphocytes, fibroblasts, and mast cells. In addition, the submucosa hosts one of the two major enteric neural plexuses, i.e., the submucosa plexus that regulates the configuration of the luminal surface, controls glandular secretions, alters electrolyte and water transport, and regulates local blood flow. We recently reported the concentrated presence of thick collagen fibers within the submucosa via second harmonic generation imaging [44], which provides anatomic support for its load-bearing function, as determined from layer-separated tensile tests [20][32]. In addition, amongst all four layers of the colon, submucosa has the highest proportion (32%) of extrinsic sensory neural endings, according to a recent tracing study [42]. Moreover, we recently showed that most sensory endings in the submucosa are free endings, small in diameter (~1 micron), and meandering, which are anatomic features of typical nociceptors that encode tissue-injurious mechanical stimuli [44].

The muscularis propria consists of two layers of smooth muscle: an inner circular muscle layer and an outer longitudinal muscle layer. Between these two muscular layers is the myenteric plexus, one of the two major enteric neural plexuses. The ganglia in the myenteric plexus are more prominent than their submucosal counterpart. The myenteric plexus receives projections from preganglionic parasympathetic fibers as well as postganglionic sympathetic fibers [40]. The myenteric plexus directs the coordinated wave-like propulsive movement of the colon (peristalsis) via a “hardwired” polarized polysynaptic peristaltic circuit [44]. Despite its relatively thin through-thickness dimension (~2% of the total wall thickness of mouse colon from the authors’ unpublished observations), the myenteric plexus also hosts 22% of the extrinsic sensory nerve endings [42]. The circular muscle layer has a slightly greater amount of sensory nerve endings (25%) but is significantly thicker [42]. In contrast, there are barely any extrinsic sensory innervations in the longitudinal muscle layers [42].

The serosa is the outermost layer of the intestinal wall and is composed of a continuous sheet of squamous epithelia cells, the mesothelium [44]. It represents an extension of the visceral peritoneum and mesentery as it envelops the intestine. Although the serosa has a significant content of collagen fibers [44], it is unlikely to have a major load-bearing role due to its thin thickness compared to the total intestinal wall thickness [32]. Like the longitudinal muscle layer, the serosa also lacks significant sensory innervation [42][44].