Rehabilitation is the process of treating post-stroke consequences. Impaired limbs are considered the common outcomes of stroke, which require a professional therapist to rehabilitate the impaired limbs and restore fully or partially its function. Due to the shortage in the number of therapists and other considerations, researchers have been working on developing robots that have the ability to perform the rehabilitation process. During the last two decades, different robots were invented to help in rehabilitation procedures. This paper explains the types of rehabilitation treatments and robot classifications. In addition, a few examples of well-known rehabilitation robots will be explained in terms of their efficiency and controlling mechanisms

The World Health Organization reported that around 15 million people suffer from stroke yearly; around six million of them become disabled. The disabilities vary form fully paralyzed limbs to weakness[1][2].

Scientists have found that particular activities of the brain can be transferred to a different location in the brain, and this is known as neuroplasticity[3]. Studies showed that repetitive motions for the impaired limbs allow the brain to develop new neural pathways and, ultimately, restore full or partial control of motor functions[2].

The importance of using a rehabilitation robot comes from its ability to provide quantitative and continuous monitoring for patient performances during the training, which allows us to understand the recovery mechanism during the repeated tasks[5].

2. Rehabilitation Robots and Their Classifications

2.1. According to Robot Treatment Approaches

Rehabilitation robots can be classified into two types, according to their treatment approaches. The first approach is continuous passive movement (CPM). CPM requires no volunteer effort performed by the patient where the limb is controlled and moved by the robot[6]. CPM treatment reduces muscle tone, which eventually improves the mobility of muscles, joints and tendons[5]. Furthermore, CPM activates the cortical area that has the corresponding sensorimotor and leads to an action similar to normal movement[5]. The second approach is active-assisted movement, where the robot requires a signal from the patient to perform the movement. This signal could be an electromyogram (EMG) and follows the patient’s intention to move the limb[7]. Rehabilitation robots with active-assisted movement require voluntary effort from the patient and, consequently, provide significant motor improvement when they are compared to CPM rehabilitation[5]. Therefore, most of the current researchers focus on active-assisted rehabilitation using robots[5].

The EMG-driven robots use an EMG signal an as “on-off” controller, which means that, once the patient voluntarily initiates the robot, the robot will repeat its action for a period of time. Then, the patient will be allowed another voluntary signal[8].

2.2. According to the Robot Structures

Rehabilitation robots are also classified as end-effectors and exoskeleton robots[9]. End-effectors are simple robots that have a distal movable handle, and the patient attaches his/her hand to this handle and follows a specific trajectory[10]. This kind of robot is characterized by its ability to adapt to different sizes and shapes of movements, as the rehabilitation process requires[11]. End-effector robots have the disadvantage of not providing a rotation movement, which makes it not suitable for pronation and supination movements[2]. End-effectors have been developed recently to provide bilateral rehabilitation training, where the impaired limb copies the movement of the unimpaired limb in a synchronized behavior[12]. Some researchers have reported that bilateral rehabilitation has the feature of activating the impaired hemisphere by making the left side and the right side of the body follow the same trajectory[13].

Mirror image movement enabler (MIME) is a CPM robotic system that consists of a wheelchair and height-adjustable table[23], where the patient sits on the wheelchair and puts his/her affected limb on the adjustable table. The affected limb is strapped into the forearm splint that restricts the movements of the wrist and the hand[23]. A Puma 560 (Programmable Universal Machine for Assembly) robot was used as the manipulator, where the robot attached to the splint and applied force to the affected limb during its movements[24]. The Puma 560 robot provided six degrees of freedom, which provided a large range of movement positions in a 3D space[25]. MIME, provides the three treatments modes that are the passive, active-assistive/active-resistive and bilateral modes[17]. In addition, MIME is commonly used in the passive and active-resistive modes[12]. In the passive mode, the robot moves the limb in a specific trajectory towards the target. The active-resistive mode involves prohibiting the limb’s movements in the identified trajectory by providing a viscous resistance, and the patient has to provide maximal effort to reach the target[26]. MIME is used to strengthen the muscles and improve the limb’s motions[8].

The Assisted Rehabilitation and Measurement guide (ARM guide) is also an example of a CPM rehabilitation robot and is used for the training and evaluating of upper limb functions[27]. The ARM guide, shown in Figure 1, uses the reaching principle as a therapy technique, where the patient’s arm is attached to a splint, and the patient is advised to reach for things[17]. The ARM guide provides one degree of freedom on a linear constraint rather than multiple active degrees of freedom. Therefore, the ARM guide is considered as an inexpensive and a simple rehabilitation robot[27]. The orientation of the ARM guide can be changed vertically or horizontally[27]. 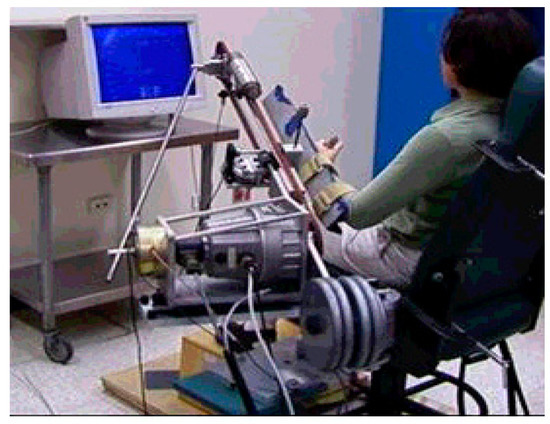 ARMin is an upper limb rehabilitation robot and is characterized by providing seven degrees of freedom (DOF), allowing shoulder rotations in three dimensions, flexion/extension of the elbow, supination/ pronation of the forearm and flexion/ extension of the wrist, in addition to supporting the closing and opening of the hand[28]. ARMin consists of a chair and robotic arm, where the seated patient attaches his/her hand to the robotic arm and adjusts its length to its optimum, as shown in Figure 2[29][30]. ARMin has three levels of safety, where the device is equipped by many sensors that work as a system to detect any malfunction that could arise. Secondly, the ARMin has no sharp edges, and no joint will move out of the range of a human limb[28]. Thirdly, a unique algorithm was developed to monitor the repeated motions, and immediate shutdown happens in case of malware being found[24].

The results showed an improvement in the limb’s motion, where the user was able to extend his/her limb to further distances. In addition, the strength of the support was decreased gradually as the patient recovered their motor sensory[18][30].

Cable actuated dexterous exoskeleton for neuro-rehabilitation (CADEN-7) provides seven degrees of freedom[31]. CADEN-7 is considered an active-assisted robot that uses surface electromyography to control the upper limb[32]. CADEN-7 is also equipped with three levels of safety, taking into consideration the electrical aspects, mechanical aspects and software aspects[31]. The unique design of CADEN-7 makes it suitable to avoid hyperextension and erratic motions. CADEN-7, however, has to be fixed on external forms and cannot be portable due its size and weight[18].

The Light Exoskeleton (L-EXOS) system focuses on providing repetitive movements and gives a simultaneous measurement for the therapeutic progress[33]. L-EXOS, incorporates visual reality to guide the patient to a specific trajectory[34]. In terms of safety concerns, L-EXOS provides a velocity equal to 10 rpm, and the maximum torque cannot exceed 120 Nm. In addition, L-EXOS provides five degrees of freedom, and each movement is equipped by a sensor[18].

The therapy Wilmington exoskeleton (T-Wrex) is an active upper limb rehabilitation robot with five degrees of freedom[35][36]. It is dedicated for individuals with significant arm weakness by providing intensive training. The T-Wrex uses the feature of gravity compensation or antigravity for the entire arm, where the patient experiences the sense of a floating arm in space[36]. In addition, the T-Wrex is characterized by providing a large 3D movement that naturalizes the upper limb movements[35]. The T-Wrex consists of two links attached to the forearm and upper arm. In terms of safety, position sensors and custom grip sensors are integrated to the robot, which provide movement measurements for the upper limb[35].

The Rehabilitation Robot (REHAROB) therapeutic system is a passive rehabilitation robot with three degrees of freedom dedicated for the shoulder and the elbow[36]. The movement trajectory is preprogrammed by the therapist and followed by repetitive movement for the impaired limb. The exercises performed by REHAROB are different than those performed by MIT-MANUS and MIME by providing slow repetitive movements with a constant velocity[37]. These kinds of exercises are efficient in reducing spasticity and increasing the range of mobility for the shoulder and elbow joints[37]. The patient’s upper arm and forearm are attached to the robot’s arm[38]. The REHAROB is equipped by sensors to control and monitor the generated forces[37].

The Biomimetic Orthosis for Neurorehabilitation (BONES) is an active rehabilitation robot with four degrees of freedom[36]. The BONES is characterized by its ability to provide arm internal/external rotations without the need to bring or use any bearing element. The unique design was inspired by human biomechanics. In addition, the BONES occupies five actuators to provide a wide range of motion for the upper limb and further measurements for safety issues[39].