The clinical translation of quantum dots (QDs) has gained much importance for the biomedical application. But the most used conventional QDs contains toxic heavy metals such as Pb, Cd and Hg. Hence, there is a need for an alternative material with similar optical properties and low cytotoxicity.  Among these materials, CuInS2 (CIS) QDs has attracted a lot of interest due to its direct bandgap in the infrared region, large optical absorption coefficient and low toxic composition. All these make it a good material for biomedical application. For further research on the material, there is a need for a critical review which summarise the various synthetic strategies, surface modification and Biological evaluation involved with CIS QDs.

Semiconductor nanoparticles also referred to as zero-dimensional material or quantum dots (QDs), have gained significant interest in many areas of applications ranging from water to energy, sensing and biological applications due to their quantum confinement effect.[1][2][3][4] Compared to conventional organic dyes, QDs exhibit high photostability and tunable optical properties by changing the size and composition.[5] The development/research on binary QDs has received considerable interest, and the field has been explored extensively; however, only a few commercial products have been developed due to their toxic composition.[6] Therefore, alternative, low or non-toxic material is imperative, especially for biological application.[7][8][9][10] The II-VI group and IV-VI group-based materials have been extensively studied, while other materials such as binary III-V and low-toxic ternary I-III-VI are less explored[11]. The I-III-VI quantum dots, which contain group I (Cu, Ag), group III (Al, Ga, In, Ti) and group IV (S, Se, Te), have been reported as less toxic compared to II-VI binary QDs. The replacement of group II in II-VI binary QDs by the group I and group III cations has led to the production of Cd- and Pb-free ternary nanocrystals NCs/QDs (e.g., CuInS2, AgInS2).

The basic synthetic method for the formation of ternary QDs is based on the initial formation of nuclei, which are combined to form multinary NCs, or through the nuclei, which can also act as seeds and facilitate cation exchange or ionic diffusion.[9][12] For example, binary copper chalcogenides (e.g., Cu2S) can be subjected to a partial cationic exchange which can partly replace copper ions with other cations (e.g., Zn2+, Sn4+).[13] The limitation of this method is the long reaction times and polydispersity. Therefore, to obtain a monodisperse confined NCs with controlled composition, the cationic reaction should be finely balanced. Thus, using stabilizing agents to control the reactivity of the precursors has been proposed.[14][15][16][17][18] In order to tune the optical properties of the ternary NCs, the control on composition and phase homogeneities are very important. The desired phase of the crystal depends on the nature of cation and control on the site occupancy by tuning the precursors, surfactant and experimental conditions (Figure 1). CuInS2 (CIS) is a direct semiconductor with a bandgap of around 1.45 eV, a large extinction coefficient, good radiation hardness and excellent defect tolerance. The Bohr exciton radius of CIS NCs is reported to be around 4.1 nm, and the quantum confinement in this crystal can be observed until it reaches 8 nm in diameter.[19] There are reports on the tuning of its emission position as the diameter of the CIS changes [20][21], but with a broad full width and half maxima (FWHM) (90–120 nm) compared to binary QDs. The initial assessment of this broadness was focused on the size distribution of the as-synthesized material.[20] However, after various reports, this broadness of photoluminescence (PL) spectra has been shown to be independent of the size distribution in the case of CIS-based QDs and can be attributed to the distribution of vibrational states.[21][22] This shows that quantum size effects are not the only factors that can influence the bandgap of the ternary NCs[7][20][22], as the composition of anions and cations also plays a major factor.[23][24] Regarding the composition tuning, the valence band of the CIS (Cu 3d and S 3p orbital) can be lowered when the Cu content is reduced. The tuning of composition leads to the stoichiometric deviation, which, in turn, generates a large number of donor-acceptor states within the bandgap. These high densities of states lead to a high probability of radiative recombination of donor-acceptor and result in broad photoluminescence (PL) spectra, long PL lifetime and a shift in stokes.[10][25] The time-resolved PL(TRPL) analysis is used to understand the charge recombination in these QDs. For the ternary QDs, the PL decay is usually reported to be double/triple exponential analysis. The average PL lifetime for CIS QDs is reported to be between 100–300 ns, which is much longer than the binary QDs. As reported, the PL decay also depends on the composition of the CIS NCs.[21] Thus, the bandgap cannot be determined by merely accessing the PL spectra. Moreover, the large volumes of defects lower the quantum yield (QY). From this, we can conclude that the optical property of ternary QDs depends not only on the size but also on the composition, crystal phase, ordering and surface passivation.

Figure 1. The strategies (size tuning, composition tuning, and surface tuning) that are applied to synthesize the highly luminescent CuInS2 NCs.[26]

Biological application (in vivo and in vitro) using QDs has become an attractive alternative over the conventional fluorophores. Higher quantum yield, photoluminescence efficiency, stability and biocompatibility are the desired characteristics for bioimaging application. Studies have shown that incidence of visible light (400–650 nm) for bio-imaging will be absorbed by the collagen, hemoglobin and lipids, thus making tissue imaging impossible in this spectral region. Therefore, a material with a near-infrared (NIR) window (650 to 1350 nm), where light is expected to have maximum penetration depth in tissue and less autofluorescence, is preferred.[27] The preferred intake of quantum dots by cells is through transfection or receptor-mediated endocytosis rather than through microinjection. Therefore, proper surface conjugation or charge is necessary for their bio application. In addition, before biological application of quantum dots, it is important to tune the surface reactivity, stability, lifetime and biocompatibility of the QDs. This review focuses on the various synthetic strategies (organic and aqueous), formation mechanism, biological applications (in vitro and in vivo) and future perspectives of CuInS-based QDs (Scheme 1). 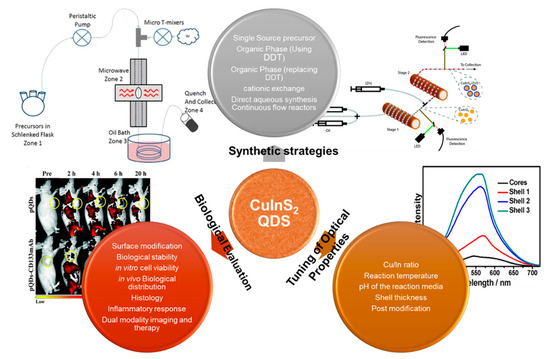 Scheme 1. A schematic representation of the different synthetic methodology and evaluation of CuInS-based QDs.

The significant biological evaluation was conducted by  Kays et al. [28] in which they used the murine model to study the in vivo biodistribution and cytotoxicity of CuInS2 (CIS), Zn-doped CuInS2 (CISZ) and CuInS2/ZnS QDs for different days (1,7 and 28 days). They observed a quick clearance, and less than 25% of the material was found in the organs after 28 days. They also studied the in vivo toxicity of the QDs by recording organ indexes (Figure 2). For CIS and CISZ, there was a significant increase in the liver and spleen organ index, but there were no significant changes observed for CIS/ZnS QDs. The kidney size variation was inconsistent, and only CIS and CIS/ZnS showed a significant change. From the histopathology studies, they observed geographic necrosis with the CIS QDs. For the CISZ, there was only small inflammation. In the case of the spleen, CIS- and CISZ-treated cells exhibited multinucleation, which was the result of an inflammatory response. In addition, disruption of spleen architecture was observed with CIS QDs. However, no significant toxicity to the kidney was observed for all the materials. From the results, they confirmed that with the ZnS coating, they were able to minimize the degradation and subsequent toxicity of the material.

CuInS2 (CIS) has been reported as an alternative to Pb-, As-, Cd- and Hg-based QDs due to its toxic-free composition. Moreover, its PL can be easily tuned towards NIR regions by varying its composition. The CIS/ZnS QDs synthesized through organic method have excellent PLQY, but their effective application is hindered due to the hydrophobic nature and toxicity of the reagents used. However, the hydrophobic QDs can be effectively transferred into aqueous media through the ligand exchange process, which can facilitate their use in biomedical applications. However, the ligand exchange process has a great effect on the PL properties of the material, such as a decrease in PLQY and blue shift in the emission position. Therefore, direct synthesis in water is preferred with postmodification with polymers and other capping agents which can improve the solubility, biocompatibility and target specificity of the material. The surface-modified CIS core and CIS/ZnS core/shell QDs have been tested in vivo and in vitro in various cell lines and animals for tumour imaging, lymph node imaging, etc., which shows the excellent applicability of the material for a clinical trial.

Even though there are various green synthesis approaches reported for the synthesis of CIS-based QDs, a complete green synthesis has not been fully established. The authors recommend thorough research in the designing of a green synthesis protocol for CIS QDs. The tuning of optical properties by mere adjustment of the ratio between metal precursors will not be enough. Since the formation of CIS QDs also depends on other parameters such as the nature of the capping agent, the concentration of the precursors, the effect of pH, the nature of shell source, and reaction temperature, a detailed optimization of parameters is required when a new precursor or capping agent is chosen. Most of the studies also reported CIS and CIS/ZnS QDs as “nontoxic”, which was based on an average observation and histology. More investigations are needed in this area using different cytotoxicity assays for a concrete report on the toxicity of this material. Further studies are also required in the modification of synthetic strategies towards large scale synthesis, without any significant change in the PL properties of the material when compared to those synthesize in the laboratory.