Cell sheet engineering has evolved rapidly over the last few years and as a new approach for cell-based therapy. Cell sheet harvest technology is important for producing viable, transplantable cell sheets and applying them to tissue engineering. To date, various approaches have been reported for harvesting cell sheets by inducing property changes of the culture surface such as wettability, pH, electricity, and magnetism. This section provides a comprehensive introduction to reactive oxygen species (ROS) and the progress of new strategies for applying ROS in cell sheet detachment.

The main sources of intracellular ROS are mitochondria, the endoplasmic reticulum (ER), peroxisomes, microsomes, and nicotinamide adenine dinucleotide phosphate (NADPH) oxidase (NOX) complexes in cell membranes [2][8][9]. In particular, mitochondria are the main intrinsic source of ROS production via the mitochondrial electron-transport system [10]. Extracellular sources also contribute to ROS generation, such as radiation, pollutants, nanoparticles (NPs), and various drugs, and certain types of other chemical compounds also play a role [11][12][13]. NPs of metals can induce the generation of the radical reactive superoxide by donating an electron to molecular oxygen; the superoxide then triggers a cascade of radical forming reactions [14], as shown in Figure 1. 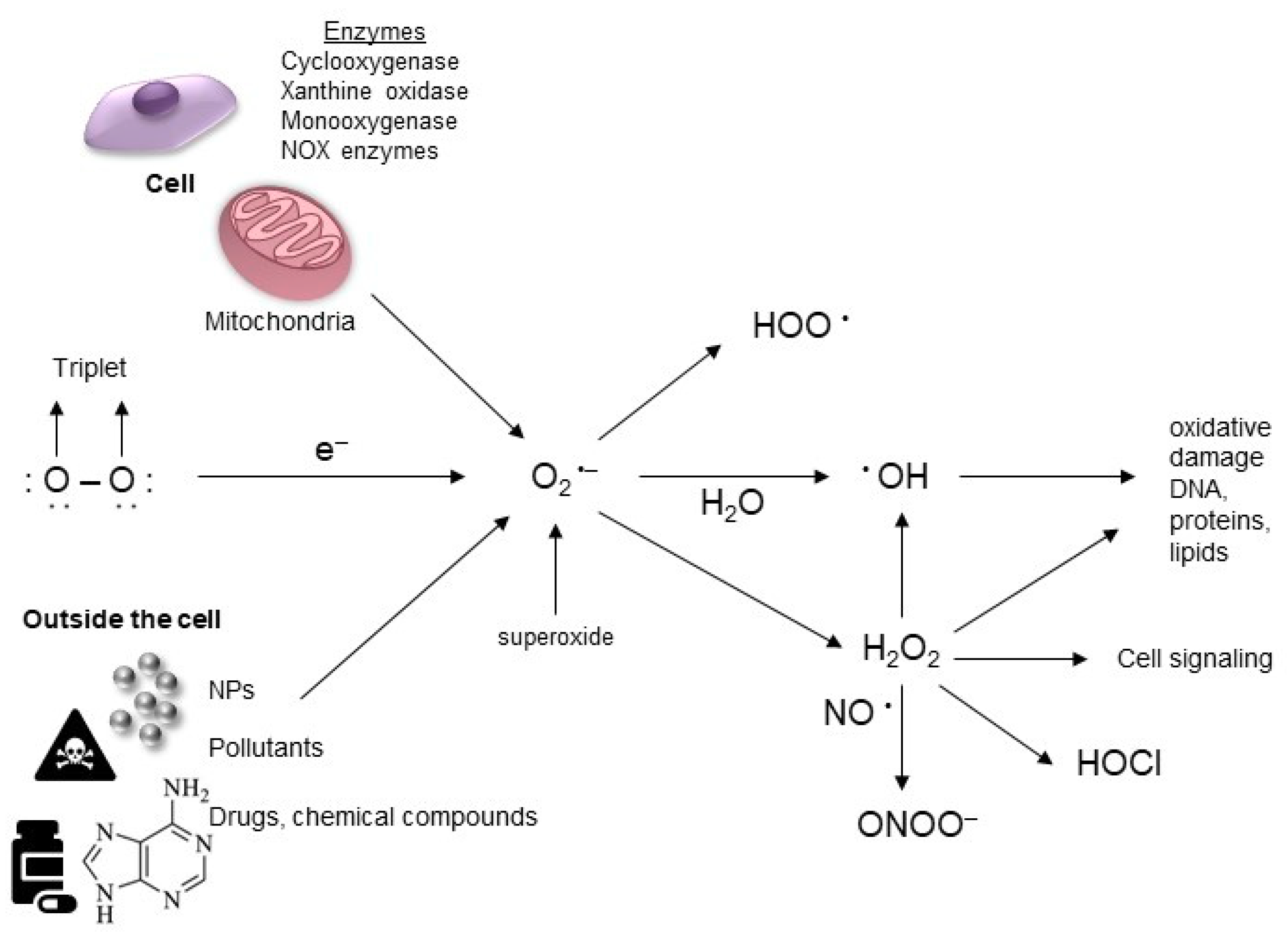 Photodynamic action (PDA) is a method of inducing the generation of ROS. Integral to PDA are a photosensitizer (PS), a light-absorbing molecule, and a light source with a suitable wavelength. With light irradiation, the PS absorbs the light energy and transfers to an excited state. The excited PS then undergoes a photochemical reaction (PR) with a biological environment to generate ROS, which is called PDA [15]. There are two main types of PDA: type I reaction involves electron transfer PR to generate radical and radical anion species, while type II reaction directs PR through energy transfer between oxygen and excited PS, to produce singlet oxygen (Figure 2)[16][17][18][19].

Figure 2. Schematic illustrations of the process of generating extracellular ROS from a photosensitizer under light irradiation. PS: photosensitizer.

Studies have reported that ROS act as mediators of cell adhesion [20], and an increase in intracellular ROS levels can lead to cell detachment [21]. The Möhwald group[22] reported the use of light to release fibroblasts cultured on gold nanoparticle-based surfaces. Gold nanoparticles (AuNP) have strong light absorption in the green spectral range. Thus, the authors irradiated the surface with a green laser (532 nm) to produce extracellular ROS by a photochemical mechanism (Figure 3A). The ROS damaged cell membranes at the cell–surface interface, detaching the cells from the substrate. The cells did not immediately detach from the surface, but took up to 24 h to completely detach. One of the advantages of this system is that the surface can be recovered, allowing the cells to reattach in the irradiated areas within 72 h. This property is able to spatially pattern cells, and control the area where the green laser is irradiated to produce co-cultured cell sheets that can be reattached by seeding different cell types after the surface has recovered (Figure 3B). This method has been reported to be applicable to the individual detachment of cells from the culture surface, but has not shown the results of detaching the cells in sheet form.

Recently, Koo et al. [23] reported a new ROS-induced strategy for direct transfer of intact cell sheets to target sites without intermediate harvesting processes based on hematoporphyrin-incorporated polyketone (Hp-PK) film. After green light emitting diode (LED) (510 nm) irradiation for 5–10 min, exogenous ROS generated from the Hp-PK film induced cell sheet detachment and transfer simultaneously. Briefly, this process is carried out by placing a cell cultured film on the target site, irradiating light, and then peeling only the film (Figure 3C). They have successfully applied the detachment of various cell types in a simple way to control the irradiation power and time. In addition, this strategy was applied to the in vivo transplantation onto subcutaneous tissue. Cell sheets can adhere to tissues because of the presence of extracellular matrix (ECM). Therefore, They stacked the cell sheets in multiple layers and transplanted them by the ROS-induced method, and confirmed that the stacked cell sheets were well grafted at the transplant site without cell loss. In particular, multi-layered stem cell sheets accelerated wound healing in full-thickness skin defects [24]. The currently reported single cells or cell sheet detachment methods have inevitably resulted in cell damage since the cells have to be left at a low temperature or low pH environment for a long time [25][26][27]. In addition, the ligands and magnetic NPs, which are used for cell detachment, are released together with the cells. Thus, there is a limit in harvesting only an intact cell sheet. This system addresses these limitations and demonstrates the possibility of efficient cell transplantation into the lesion site for tissue regeneration and reconstruction, the ultimate goal of cell sheet engineering.

The advantage of the methods using extracellular ROS is the ease of spatio-temporal control of cell detachment. ROS have a short half-life (<40 ns) and can only act close to the site of generation (<20 nm), which is significantly less than cell dimensions [28][29]. Thus, on a molecular scale, ROS can only act chemically at a small distance from the site of their production. Due to this property, the Möhwald group's research [22] mentioned above shows that spatial control is possible by ensuring that the cells attached to the surface of AuNP undergo patterned detachment according to the ring-like profile of the laser beam. In addition, the PS-incorporated film used in Koo's study [23] suggested that the occurrence of unintentional cell detachment can be avoided by spatially controlling the generation of ROS and controlling the production time with or without light stimulation.

Figure 3. (A) Schematics of cell detachment by laser irradiation on AuNP-based surfaces. (B) Phase contrast microscopic images showing cell detachment areas according to the laser power. The images were taken 24 h after irradiation (Reprinted with permission from [22]. Copyright (2019) American Chemical Society). (C) Schematic illustration of the ROS-induced cell sheet detachment and transfer procedure on Hp-PK films (Reprinted from [23] with permission on Elsevier and Copyright Clerance Center.)

Current Limitation for Clarifying the Mechanism by ROS

Because cell sheet detachment by extracellular ROS occurs gradually, some studies have reported that this change is due to cell signaling initiated by ROS [30][31]. The downstream effect of ROS production is the generally reversible oxidation of proteins [20][32]. Redox-sensitive proteins, which include protein tyrosine phosphatases (PTPs) as the active site cysteine, are the target of specific oxidation by various oxidants [33]. Focal adhesion kinase (FAK) is a non-receptor protein tyrosine kinase that plays an important role in signal transduction from integrin-enriched focal adhesion (FA) sites that mediate cellular contact with the extracellular matrix. Multiple protein–protein interaction sites of FAK mediate association with adapters and structural proteins [34][35]. Chiarugi et al. [20] provide evidence that ROS take a role in integrin signaling. In the role for oxidative species in integrin signaling, ROS generated during cell adhesion induce up-regulation of FAK. However, increasing of intracellular ROS up to a threshold level delays cell adhesion to ECM proteins, and results in a negative function of PTP on FA development and cytoskeleton organization. Koo et al. [36] previously reported that extracellular ROS increase the amount of intracellular ROS. H2O2 can diffuse through specific aquaporins (AQP) in the plasma membrane, and superoxide anion (O2–) can penetrate the cell membrane through anion channels (Cl– channel-3) to initiate intracellular signal transduction [36][37][38][39]. There are many ways in which extracellular ROS can be transported into cells, but the exact mechanism of ROS that affects cell detachment is unknown. In contrast, Koo's study using FTIR spectroscopy demonstrates that ROS-induced cell detachment is due to secondary structural changes in proteins adsorbed on the Hp-PK films [23]. Thus, they have supposed that these conformational changes are caused by extracellular ROS in ECM proteins present in the cell sheet. However, the type of ROS that affects cell detachment has not been identified.

ROS are difficult to distinguish and quantify from each element by specific assays. These other reactive molecules have properties of overlapping or distinguishing from each other. Some scientists have reported that various types of ROS can be distinguished by specific probes and categorized several probes for each ROS (Table 1) [40][41][42][43]. There are various ROS probes that can be analyzed by flow cytometry or microscopy [44][45]. However, most of these are not specific to a particular ROS species, are unstable, and can be affected by other factors distinct from the oxidants. Therefore, when using these probes, it is necessary to carefully interpret the data derived by comparing the various methods.

Table 1. Methods for the detection of ROS. (Reproduced from [43] by permission of The Royal Society of Chemistry).