Subjects: Others
View times: 68
Submitted by:

Cement-based materials (CBMs) such as pastes, mortars and concretes are the most frequently used building materials in the present construction industry. Cement hydration, along with the resulting compressive strength in these materials, is dependent on curing temperature, methods and duration. A concrete subjected to an initial higher curing temperature undergoes accelerated hydration by resulting in non-uniform scattering of the hydration products and consequently creating a great porosity at later ages. This phenomenon is called crossover effect (COE). The COE may occur even at early ages between seven to 10 days for Portland cements with various mineral compositions. Compressive strength and other mechanical properties are important for the long life of concrete structures, so any reduction in these properties is of great concern to engineers.

COE phenomenon was reported in the literature. However, based on the data reported in some papers, COE could be observed while the authors did not highlight and discuss this phenomenon in the publications.  This study is a broad literature review on this phenomenon based on the existing published papers and try to identify this phenomenon in the other published papers those could not discover and discuss about it in the study. In addition, this paper tries to further explain about COE, reason and mechanisms and methods to overcome this drawback in concrete/mortar.

Cement-based materials (CBMs) such as mortars and concretes are the most frequently used building materials in the construction industry [1]. Cement hydration is extremely exothermic in these materials [2]. The hydration process of cement continues for many years at a reducing rate, depending on the water quantity in mixture and appropriate curing temperature conditions [3]. For long-term durability and strength of concretes and mortars, their appropriate mixes should be placed and cured in a proper environment during early hardening by preventing water loss of evaporation from capillaries [4]. In addition, internal water loss by self-desiccation should be replaced by water from external sources [5]. The hydration process and resulting compressive strength of concrete depend on curing temperature, curing methods, curing duration and mix composition [6]. The compressive strength of concrete, along with other mechanical properties, has essential role in the design and construction of all types of concrete structures [7].

Researchers [5][10] described that increasing curing temperature of CBMs, such as cement pastes, mortars and concretes, increases rate of early-age strength gain but lowers the long-term strength (see Figure 1). Garcia and Sharp [11] also reported that concrete exposed to high curing temperatures exhibits accelerated hydration and non-uniform spreading of the hydration products. Such an exposure creates less porosity at early-ages and great porosity at later-ages. It results in increased compressive strength at early-ages and reduced compressive strength at later-ages [8].

Figure 1. Crossover effect (COE) with maturity and strength at low and high temperatures. 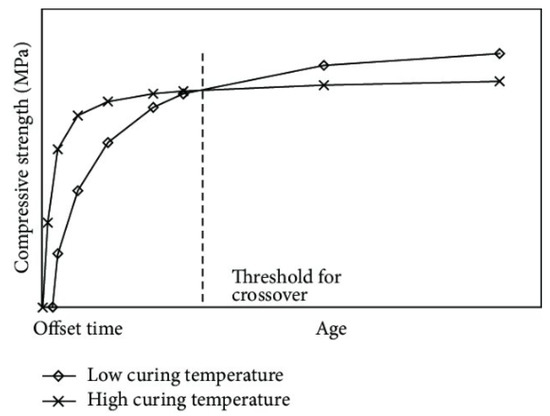 Figure 2. COE during strength development of concrete due to different initial curing temperatures. Adapted with permission from [19], Hindawi, 2015.

According to Lothenbach et al. [20], the COE in compressive strength occurs in Portland cements, but its occurrence for blended cements having slag [11][21], natural pozzolan [22] and fly ash [23] is debated. The term COE has recently been used by researchers, but information is insufficient for a detailed discussion of this phenomenon in the CBMs. However, given the importance of mechanical properties and durability of concrete for long life of concrete structures, even any small reduction in the properties greatly concerns engineers.

The strength-gaining rate and hardening of CBMs such as mortars and concretes in the normal curing conditions are slow. Therefore, heat treatment is commonly used in the precast concrete industry to speed up the strength-gaining rate of these CBMs. The application of heat treatment depends on the acceleration of hydration reactions [24]. Under heat treatment application, cement fineness, Portland cement composition, types and amounts of the additives used in blended cements are the main factors to determine behaviour of cements [25]. The degree and speed of cement hydration, the consequent strength of CBMs and other mechanical properties are also directly influenced by the curing process [26].

According to the research reports [18][31], the detection of COE depends on the range of temperature, duration of testing, type of cement used, proportions of the mineral additions and mineralogical composition of the cement used. Reports from the researchers [32][33] showed that an elevated temperature speeds up the binder hydration process and increases the quantity of formed hydration products (for example calcium-silicate-hydrate). Moreover, accelerated curing temperature increases strength gain at initial ages by faster precipitation of hydration products and refining pore structure of CBMs. According to several reports [32][34][35][36][37] COE is caused by harder and thicker formation of hydrated shells, low porosity hydration products round cement grains, slow diffusion of hydration products in secondary cement hydration reaction and non-uniform scattering of reaction products in pores of the hardening cement paste at elevated temperature. Kim et al. [38] reported that COE can appear even after seven days. Kjellsen et al. [39][ reported that the non-uniform distribution of hydration products results in porosity of bulk cement paste. Additionally, speedy temperature increase during early ages can increase inside stresses that surpass tensile strength of immature concrete, leading to increased porosity, cracking and decreased potential strength.

According to the reports [11][32][35], the rate of hydration and concrete strength increase rapidly by increasing early curing temperature, but porosity increases and micro cracks appear because of non-homogeneous distribution of hydration products and variance in coefficients of thermal expansion of the concrete's ingredients, which finally leads to reduced compressive strength at the later ages. Aldea et al. [40] stated that the hydration products do not have sufficient time for their uniform distribution within the pores of hardening CBMs at elevated temperature. Consequently, hydrated shells with low porosity are formed near the cement particles by ending further hydration. This non-uniform scattering of the hydration products causes large capillary pores by decreasing later-age compressive strength. Mindess and Young [41] also reported that steam curing makes the COE by causing great reduction in compressive strength because of less homogeneous scattering of hydration products in the paste due to fast initial hydration.

Researchers [42][43] reported that the major cause of the strength reduction at later ages is the shortage of the inner water present in samples to complete hydration. In a common water to cement ratio, internal water is present and sufficient for hydration for the duration of 1–28 days. However, after 28 days, this amount of water may be reduced and become insufficient for further hydration, which will result in strength loss at later ages. Reports by the authors [32][33][44] stated that the lesser hydration reaction of anhydrous cement is also due to delaying effect of the shell on distribution of hydrates in the secondary cement hydration reaction.

This work presents a detailed literature review about the COE phenomenon in CBMs due to accelerated initial curing. The basic concept and mechanism of COE, various methods of accelerating for strength gain at the early ages and reasons for strength decrease at the later ages of CBMs, effect of cementitious materials on COE and materials controlling COE have been discussed in detail. The following conclusions are drawn from this study.

(1) Pure and blended cement products subjected to accelerated curing temperatures show faster hydration and non-homogeneous scattering of hydration products that may result in the COE of their compressive strengths.

(2) The COE in compressive strengths of pure and blended cement products depends on the initial curing temperatures from lower to higher values and the amount of internal water present for hydration.

(4) The COE in pure and blended cement products can appear even after 7 days onwards.

(5) The compressive strength loss at later ages in accelerated cured specimens ranges from 2.2% to 31% at 40–60 °C for accelerated prolong curing.

(6) The COE due to accelerated curing can occur at curing temperature as low as 40 °C.

(7) The COE can be controlled using slag blended cement with 80% replacement of GGBFS by OPC, 25–50% addition of slag powder in blended cement mortars, type V Portland cement concrete under an accelerated curing temperature of up to 50 °C as well as blended mortars with different percentages of natural pozzolan.