Safe coating and film are produced from layer-forming material such as gelling agents. They are favored to be used in food packaging applications as they are made from edible material and can act as gases barrier for prolonging the shelf life of food. Even though both safe coating and film have those similarities, they have differences with respect to their application to food products. The edible film is wrapping materials that are applied to food products separately. Meanwhile, the safe coating is a thin material that is used directly on the food products. Hence, despite both safe coating and film may be produced from the same gelling agent, their characteristics may differ significantly which adjust to the food properties that need to be protected. For applying to fruit, the safe coating becomes one of the prime concerns because of its ability to slow down the ripening process, reduce microbial growth, and maintain the physicochemical properties of fruits.

There are at least three ways to apply safe coating on food, including dipping, spraying, and vacuum impregnation. The dipping technique is one of the most used methods in coating food. Food is immersed in the coating solution and withdraw from to drain excessive solution. In some cases, such as alginate coating, second immersion into the crosslinking solution can be performed to form a film on the food[1]. The dipping technique usually requires a short duration, ranging between 0.5–5 min. This technique’s main advantage is its ability to coat the food surface thoroughly, even if the food has a rough and complex surface[2] (Figure 1). However, it is essential to note that this simple dipping technique also comes with limitations. Excellent adhesion of the coating solution to the food surfaces may be hard to achieve if the surface of the food products is hydrophilic. These cases usually occur on cut fruit. It usually requires a layer-by-layer technique, in which food is dipped in polyelectrolyte solution with opposite charges to increase adhesion with the actual coating[3][4][5][6]. The dipping method also has weaknesses such as thick coating and diminished efficacy due to dilution and dissolving effect[7]. Residual accumulation of coating materials and microbiological contamination can also occur[8]. Some process parameters that need to be controlled in the dipping method are the type of solvent, temperature, and viscosity of the coating solution, immersion and withdrawal speed, and dipping repetition and immersion time[9][10]. 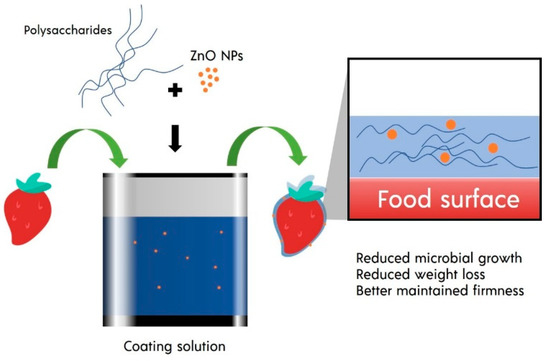 The vacuum impregnation technique is usually used when the coating is also used to enrich the food with vitamins and minerals. This technique produces a thicker and more compelling film than the previous coating technique mentioned. The vacuum impregnation is also able to incorporate solutes into foods that have air containing porous matrices such as vegetables and fruits[13][14]. The steps for this technique are similar to the dipping method. However, instead of immersing in the dipping tanks, the food is submerged into a coating solution within two airtight vacuum chambers connected to a vacuum pump. Afterward, the food is conditioned to atmospheric pressure while remained immersed in the coating solution. It is crucial to monitor and control the vacuum period, vacuum pressure, and the atmospheric restoration time for the vacuum impregnation technique[15]. This technique provides enhanced retention, uniformity, and adherence of the coating solution compared to the conventional dipping method[16].

The safe coating can be loaded with additives to modify its mechanical, functional, organoleptic, and nutritional characteristics. Additives can include a plasticizer, surfactants, antimicrobials, antioxidants, antibrowning agents, flavor, and or pigments. Among the marvelous additives for food coating is ZnO NPs. It has excellent antibacterial, antifungal, and antibiotic nanoscale agents[17][18].

Effects of Zinc Oxide Nanoparticles on Properties of Polysaccharide-Based Coating

Polysaccharide-based coating selectively allows the transfer of gas, which makes it an excellent barrier to gasses. This advantage property enables the formation of the modified atmospheric condition within the coated food. even if the gas transfer between the surrounding and the coated food is minimized, it is not completely terminated. The coated fruit is still allowed to respire aerobically at a lower rate. if the fruit only respires anaerobically, the production of different compounds may occur. These various compounds can affect the coated fruit quality in an unpleasant way. As aerobic respiration occurs at a lower rate, the process of senescence also occurs at a lower rate. Thus, the shelf life of the fruit increases[19].

Several studies have investigated the application of polysaccharide nanocomposite safe coating for fruits. The studies are summarized in Table 1 and further discussed in the following subsection.

Table 1. Summary of recent studies in the polysaccharide-ZnO safe coating.

Food packaging is an essential part of food manufacturing. Due to the expanding mindfulness of consumers in terms of health issues, the migration level of food packaging materials is a crucial point in commercial food packaging. Consumers may hesitate and worry about consuming foods that are treated with ZnO NPs. However, little study about the migration of ZnO NPs from polysaccharide is available.

ZnO NPs migration from low-density polyethylene (LDPE)-ZnO nanocomposite film have been reported by Bumbudsanpharoke et al. in varying conditions[30]. Conditions used were distilled water to simulate aqueous food, acetic acid 4% w/v to simulate acidic food, ethanol 50% v/v to simulate alcoholic food, and n-heptane to simulate fatty food. The result showed that ZnO NPs performed the highest migration on acetic acid 4% w/v. The high migration rate of ZnO NPs might be accredited to its solubility on acetic acid, which was the highest compared to other simulating solutions used. On the other hand, there was no zinc detected on n-heptane simulating solution.

Another study also focused on ZnO NPs migration from commercially available polypropylene (PP)-ZnO nanocomposite food containers (Nano center, Ltd., Shanghai, China). Simulating solution placed on the container for migration test was distilled water, acetic acid 4% v/v, and n-heptane. The test was conducted with varying temperatures (30, 45, and 60 °C). The result showed that as storage time increased, the amount of migrated ZnO NPs also increased[31]. The rate of migration was higher under high-temperature conditions[31]. The migration of ZnO NPs was found to be higher on acetic acid and n-heptane[31]. The authors mentioned that organic food simulating solution had a swelling effect on polypropylene which caused a high migration concentration of ZnO NPs.

Even though ZnO is GRAS substance which is approved by the Food and Drug Administration (FDA)[32], the nano size of ZnO may generate toxic actions. Therefore, an assessment of ZnO NPs toxicity is needed. Research by Barkhordari et al. specifically tested the cytotoxicity of ZnO NPs (size 30–70 nm) toward the human spermatozoa cells[33]. The authors mentioned that ZnO NPs caused sperm cell death in a dose- and time-dependent manner. The result showed that ZnO NPs concentration up to 100 µg/mL, incubated up to 90 min with the spermatozoa, resulted in cell death less than 10%. Elsewhere, Wahab’s research group introduced ZnO NPs to malignant cells (T98G Gliomas, and KB) and non-malignant cells (HEK)[34]. The result showed that ZnO NPs presented a depressing effect of the T98G cell growth, moderately effective on KB cells and least toxic on normal HEK cells. Namvar et al. also showed the similar effect of ZnO NPs on mice cells[35]. Namvar et al. tested ZnO against normal fibroblast cell of mice. For comparison, ZnO NPs were also tested against various cancer cells (4T1, CRL-1453, CT-26, and WEHI-3B), and cancer drugs (paclitaxel/PTX) were tested against cancer cell WEHI-3B. The results showed that the presence of ZnO NPs inhibited the proliferation of the various cancer cells (Figure 4a). Meanwhile, the presence of PTX also showed the inhibitory effect on WEHI-3B cancer cells (Figure 4b). On the other hand, ZnO NPs (100 µg/mL) did not show any toxicity toward normal fibroblast cell lines of mice using the MTT assay (Figure 4c).