Gastric cancer (GC) is a molecularly heterogeneous disease. Its molecular background, epidemiology, and standard of care are quite different between Eastern and Western countries. Many efforts have been made in developing more effective surgeries and adjuvant chemotherapies for resectable GC in each region. Recently, an intensive combination of cytotoxic agents has been established as a new standard of adjuvant treatment. Meanwhile, palliative chemotherapy is a uniform standard treatment for unresectable GC worldwide. Recently, one of the most remarkable advances in therapy for unresectable GC has been the approval of immune checkpoint inhibitors (ICIs). The use of ICIs as frontline treatment is currently being investigated. In addition, novel combinations of ICIs and targeted drugs are being evaluated in clinical trials. Despite these advances, the complex biology of GC has resulted in the failure of targeted therapies, with the exceptions of HER2-targeted trastuzumab and VEGFR2-targeted ramucirumab. GC harbors many redundant oncogenic pathways, and small subsets of tumors are driven by different specific pathways. Therefore, a combination strategy simultaneously inhibiting several pathways and/or stricter patient selection for better response to targeted drugs are needed to improve clinical outcomes in this field.

Gastric cancer (GC) has ranked as the fifth most common cancer and the third leading cause of cancer mortality worldwide in 2018 [1]. Eastern Asia has been identified as the region having the highest incidence of GC, and Central/Eastern Europe is the region with the second highest incidence [1]. Non-cardiac GC is more frequent in these regions, whereas cardiac GC is more frequent in North America, Australia, and the UK [2]. Helicobacter pylori (H. pylori) infection is the most well-established contributing factor for GC, while Epstein–Barr virus (EBV) infection is also linked to GC development [3]. Some lifestyle factors reported to increase the risk of GC are cigarette smoking, obesity, high consumption of salt and salted preserved food, and low consumption of fruits and vegetables [3].

Despite recent advances in multimodal treatment, the prognosis remains poor for advanced GC. One of the reasons for its poor prognosis is the highly complex molecular background of GC. Many genetic and epigenetic alterations have been reported, which contribute to an aggressive phenotype of GC, such as gene mutations, differential gene expression, somatic copy number alterations, and DNA/histone methylation [4]. Given that GC is a heterogeneous disease that is likely driven by multiple genetic and epigenetic aberrations, no promising and targetable drivers have yet been identified. Although no effective treatments have been developed based on molecular characterization to date, the development of more effective treatment strategy based on new molecular data could be possible in future [5][6][7][8].

Ethnic differences are also important in considering treatment strategies for GC. Differences between cases in the Eastern countries (Asia) and the Western countries (non-Asia) include molecular features, epidemiology, and standard of care [9][10]. These differences present a barrier to the global development of superior treatments for GC and should be carefully considered. This review aims to summarize and update the recent developments in the treatment for GC. We also discuss regional differences relating to genetic background and treatment strategies, especially focusing on Asian vs. non-Asian patients.

GC is difficult to intentionally detect in the early stages because it is typically asymptomatic. The high mortality of GC is primarily due to late diagnosis. Therefore, early detection and treatment is critical to reduce GC mortality [11]. Some high-risk East Asian countries have employed their own nationwide screening programs (Japan, South Korea, and Matsu Islands in Taiwan) [12]. In these countries, there is access to upper gastrointestinal endoscopy irrespective of whether an individual has symptoms. A Japanese population-based cohort study revealed that endoscopic screening can reduce GC mortality by 67% compared with radiographic screening [13]. Data from the National Cancer Screening program in South Korea showed that endoscopy was the most cost-effective screening method, which can lead to improved survival outcomes [14]. In addition, the quality of endoscopic imaging has recently and markedly improved. Image enhancement endoscopy, such as narrow-band imaging, can provide greater opportunities to detect GC earlier and allow complete endoscopic resection [15]. In fact, these active screening systems successfully led to early detection and improved survival rate. According to a nationwide population-based data in Japan between 2008 and 2009, more than 60% of GC cases were diagnosed at stage I, and 5-year relative survival was reported at 74.5% [16]. Meanwhile, Western countries do not have nationwide screening systems, resulting in later detection, unlike in Asian countries. According to the SEER-based CONCORD-2 study in the USA, the localized stage at diagnosis was reported in just 22.1% (2001–2003) or 24.9% (2004–2009) of cases, and the reported 5-year survival rate was lower than that in Asian countries (26.1% in 2001–2003 and 29.0% in 2004–2009) [17].

Tumors located in the proximal third of the stomach are more common in Western countries[18][19]. Proximal tumors are associated with more advanced stage at presentation, a larger tumor size, and poorly differentiated histology [20]. This may account for the worse survival in the West.

H. pylori infection increases cancer risk, especially for intestinal-type distal carcinoma [21]. The prevalence of H. pylori in Asia is 54.7%, which is higher than in Europe (47.0%) or in North America (37.1%) [22]. The eradication of H. pylori is known to result in the regression of atrophic gastritis [23]. However, the presence of intestinal metaplasia in H. pylori-associated chronic gastritis is suggested to be less reversible after H. pylori eradication than atrophic gastritis alone [24]. A meta-analysis revealed that the comparative risk of developing GC after H. pylori eradication was 0.65 [25]. Meanwhile, evidence showing that the cure of H. pylori infection reduces the risk of GC in cases of widespread intestinal metaplasia is lacking [26]. 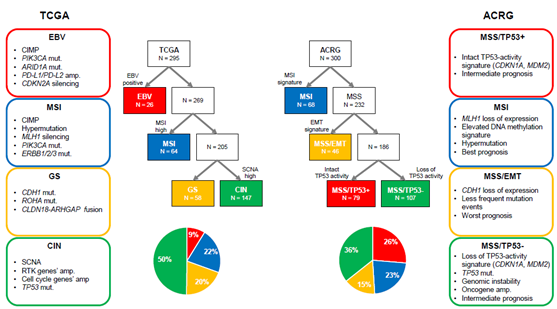 Ethnic influence on molecular characteristics has been reported[32]. Although TCGA data did not identify strong biologic differences between East Asian and other populations, some differences were observed in pathway-level gene expression changes. For example, elevated expression of the telomerase regulation pathway and decreased expression of the HIF-1-alpha transcription factor network were observed in East Asian patients . Another study revealed that tumor immunity signatures significantly differed between Asian and non-Asian patients with GC [33]. Non-Asian cases of GC were associated with the enrichment of T-cell gene expression signatures and a lower expression of the immunosuppressive marker FOXP3 compared to Asian cases of GC. To better understand the effect of ethnic differences on molecular background, further investigations with an adequate sample size are needed.

4. Differences in Surgical Outcomes between Eastern and Western Countries

Standard surgical procedures for resectable GC are different between Eastern and Western countries [34]. In East Asia (Japan and South Korea), radical surgery with D2 lymph node (LN) dissection has long been considered the standard. However, D1 dissection, which is less invasive than D2, is preferred in Western countries because three European randomized trials (Dutch, UK, and Italian trials) failed to demonstrate a survival benefit with D2 gastrectomy compared with D1 [35][36][37]. However, surgeons lacking experience in these studies were thought to contribute to the poor outcomes of D2 surgery. In the European randomized trials, the mortality rate after D2 gastrectomy reached over 10%, which was way much higher than that reported in the Japanese trial (0.8%) [38]. At present, the guidelines in Europe and the USA recommend D1 resection, with D2 resection being an option that should be used sparingly and only by expert surgeons in specialized and high-volume centers [39][40]. The reported frequencies of patients receiving D2 gastrectomy for resectable GC in clinical trials of adjuvant therapy were 10–55% in the West [41][42][43] and 98–100% in the East [44][45][46][47][48][49][50] (Table 1). The 5-year OS rate of patients receiving curative gastrectomy without adjuvant treatment was reported at approximately 70% in Japanese and Korean trials [51][52] and 23–35% in Western trials [36,41,42]. Of course, this discrepancy could be partly due to differences in patient characteristics among trials. However, even for the most aggressive stage (IIIB), the Asian 5-year OS rate was reported as approximately 45%, which was much higher than the overall results in the West [51][52]. This difference in surgical outcome may lead to different intensities and strategies of adjuvant therapies.