Subjects: Others | Others | Electrochemistry
View times: 167
Submitted by:

The lithium-sulfur (Li-S) redox battery system is considered to be the most promising next-generation energy storage technology due to its high theoretical specific capacity (1673 mAh/g), high energy density (2600 Wh/kg), low cost, and environmentally friendly nature of sulfur. Though this system is deemed to be the next-generation energy storage device for portable electronics and electric vehicles, its poor cycle life, low coulombic efficiency, and low rate capability limit it from practical applications. These performance barriers were linked to several issues like polysulfide (LiPS) shuttle, inherent low conductivity of charge/discharge end products, and poor redox kinetics. Here, we review the recent developments made to alleviate these problems through an electrocatalysis approach, which is considered to be an effective strategy not only to trap the LiPS but also to accelerate their conversion reactions kinetics. Herein, the influence of different chemical interactions between the LiPS and the catalyst surfaces and their effect on the conversion of liquid LiPS to solid end products are reviewed. Finally, we also discussed the challenges and perspectives for designing cathode architectures to enable high sulfur loading along with the capability to rapidly convert the LiPS.

Given the multitude of drawbacks associated with the Li-S redox system, either simple entrapment of LiPS or incorporation of conductive backbone in the cathode surface doesn’t suffice for its development. Hence, in addition to the already proven adsorption method, accelerating the redox kinetics of the adsorbed LiPS and further entrapment of the charge/discharge end products on the cathode surface emerged as a viable approach to seize the shuttling effect and conquer the challenges such as capacity fade and short cycle life. Traditionally, electrocatalytic electrodes have been employed to enhance the reaction kinetics in electrochemical reactions like hydrogen evolution reaction (HER)[6][7][8], oxygen evolution reaction (OER)[9], and more often in redox flow cells[10][11][12][13]. In Li-S batteries, rapid conversion of liquid intermediate LiPS to solid charge/discharge end products can be facilitated by employing such highly conductive catalytic surfaces by boosting the mass transport and electron transfer rate across the cathode-electrolyte interface[14]. In this context, conventional catalytic surfaces such as platinum (Pt) and nickel (Ni) to electrocatalyze the LiPS conversion reactions have proved to deliver excellent performance along with minimal mass transport issues while showing a drastic enhancement in the rate capability[15][16][17]. During cycling, these polar natured materials provide anchoring sites for the LiPS, while demonstrating a catalytic effect to enhance the conversion of LiPS to discharge end products. Deploying the concept of electrocatalysis in the highly complex Li-S redox system can thus enable (i) effective entrapment of LiPS (ii) enhancement of LiPS redox kinetics (iii) reduction of polarization (iv) improvement in the specific capacity by several folds (v) realization of excellent reversibility (Figure 1).

Based on the function and activity, electrocatalysts designed for Li-S are mainly classified into two types (i) homogenous: catalytic active materials are dispersed in the electrolyte, which in turn produces active species that binds to the LiPS and convert them into solid products. (ii) heterogenous: cathode surfaces tailored with polarized functional groups that regulate the adsorption and conversion of LiPS into solid ones. Both types of electrocatalysts effectively reduce the charge transfer issues, which leads to the expedited LiPS redox conversion reaction along with less polarization. Additionally, these catalytic materials drastically reduce the internal resistance which arises due to the accumulation of electronically insulating products, by effectively converting them reversibly during charge/discharge. This process is known to vastly improve the Li-S cell performance. However, the homogenous electrocatalyst functions are limited to its electrochemical redox potential and solubility, restricting them from extensive usage. Whereas, being an integral part of the cathode matrix, the robust and cost-effective heterogeneous electrocatalytic surfaces with polar nature has provided widespread opportunity to be explored as cathode hosts for Li-S batteries.

In this approach, the efficiency of the liquid LiPS conversion reaction to solid end products lies in the adsorption mechanism and anchoring effect exhibited by the cathode surface. For instance, the catenation reaction of MnO2 nanosheets with intermediate LiPS via polythionate complex formation was found to accelerate the liquid to solid conversion in a very efficient manner[18]. Similarly, the incorporation of sulfiphilic CoS2 promotes the LiPS adsorption onto the surface while significantly manipulating the redox activity of liquid−liquid LiPS conversion, resulting in the prompt deposition of solid Li2S[14]. Tuning the electrocatalytic surface to lithiophilic/sulfiphilic nature has also provided a widespread opportunity to increase their anchoring or binding affinity towards LiPS. In addition to this, several other parameters such as nucleophilicity, electrophilic character, Lewis acid-base interaction strength, surface polarity determines the anchoring strength of the electrocatalytic surface towards LiPS and thus improves the performance. Previously, the Li-S electrocatalysts have been subjected to review based on recent developments in metal and non-metal based electrocatalytic surfaces[19]. In this entry, we classified the electrocatalytic cathodes for Li-S redox reactions based on their interaction with intermediate LiPS. For this purpose, we will discuss metal-sulfide, metal oxide-sulfide, metal sulfide-sulfide, and metal carbide-sulfide based interactions that influence the LiPS anchoring and subsequent redox reactions in detail, with the help of binding energies, extensive adsorption studies. We have compared electrocatalysts with other control electrodes based on cyclic voltammetry (CV) derived parameters like onset potentials for redox reactions, exchange current densities (i0), etc. Finally, we present our outlook on the development of next-generation electrocatalysts for Li-S batteries. 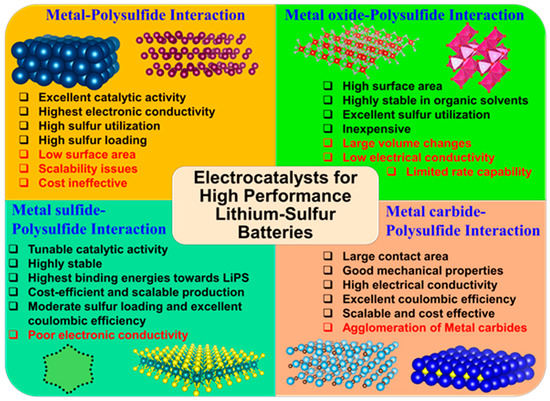 Figure 1. Schematic illustration representing the functions of an electrocatalytic sulfur host in a Li-S battery. The schematic was made using Materials Project Online software (database version 2019.05. Powered by Pymatgen version 2019.10.16)[20][21] and VESTA software[22].