NADPH oxidase (Nox) is an enzyme that primarily catalyzes the production of superoxide from oxygen and NADPH. A family of NADPH oxidases termed Nox/Duox family has been identified in a wide range of organisms including invertebrates, vertebrates and plants. So far there were very few in vivo data on Nox functions in insects. In Nilaparvata lugens, a model insect of Hemiptera, Nox5 gene is an ortholog of human Nox5, which specifically expressed in ovaries of female adults and freshly laid eggs in rice leaf sheaths. It is a key enzyme in the ovulation process of the mature oocytes from N. lugens ovipositor to rice leaf sheaths. Knockdown of Nox5 gene expression resulted in the development deficit and failure of ovulation. RNAi of Nox5 significantly reduced the production of H2O2 in the ovaries of N. lugens females.

The brown planthopper Nilaparvata lugens (Hemiptera: Delphacidae), a plant phloem-sucking Hemipteran insect, has emerged as a major pest affecting rice crops in tropical Asia and southern China [1]. Nilaparvata lugens possess robust fecundity, enabling population densities to increase quickly in a favorable environment. Once an eruption of this insect pest occurs, little can be done to control the planthoppers [1]. The regulation mechanisms of insect reproduction have attracted great interest for decades. In oviparous insects, fecundity largely depends on oogenesis and oviposition [2]. Oviposition is an important phase for the reproductive success of insects. It has been recognized that some proteins/enzymes play vital roles in insect oviposition through regulating a variety of biological processes. In Drosophila melanogaster, matrix metalloproteinase 2 is required for the release of mature oocytes from follicles [3]. Nicotinamide adenine dinucleotide phosphate (NADPH) oxidase plays an essential role in generating superoxide in mature follicles for Drosophila oviposition [4]. In N. lugens, some progress has been made in understanding its reproductive regulation mechanisms. A mucin-like gene and an eggshell-associated NlChP38 gene, specifically expressed in the follicular cells, are essential for N. lugens oviposition [5][6]. We speculate that there are functional candidate genes contributing to oviposition success, but which remain unexplored. In this study, we searched N. lugens genome and developmental stage- and tissue-specific transcriptome databases [7][8][9][10][11] and identified an NADPH oxidase 5 gene that is specifically expressed in ovaries of female adults and freshly laid eggs in rice leaf sheaths.

NADPH oxidase is an enzyme that primarily catalyzes the production of superoxide from oxygen and NADPH [12]. A family of NADPH oxidases termed the Nox/Duox family has been identified in a wide range of organisms including invertebrates, vertebrates and plants [13]. The mammalian Nox/Duox family contains five Noxes, which have different tissue distribution and biological functions in the generation and regulation of reactive oxygen species (ROS) [14][15][16]. The enzymology and the physiological functions of Noxes have been extensively studied in a variety of mammalian cell types. It is known that NADPH oxidase-produced ROS are involved in immune defense reactions against microbes in mammalian phagocytes [13]. ROS also play an indispensable role in mammalian oviposition [17]. Despite these observations, there is no clear evidence to support an in vivo role of NADPH oxidase-generated ROS in mammalian oviposition. Insects have much fewer Nox genes compared with mammals. The genome of D. melanogaster, a Dipteran model insect, contains only one Nox gene, an ortholog of human Nox5 [4]. The genome of Bombyx mori, a Lepidoptera model organism, encodes two Nox genes, which are the orthologs of human Nox4 and Nox5. The Nox gene family in insects may have undergone a contraction during the evolutional process. So far, there have been very few in vivo data collected on Nox functions in insects. An earlier study proposed the concept that Drosophila Nox5 regulated oviposition by mediating ovarian smooth muscle contraction [13]. Recent work provided new evidence demonstrating that Nox5 does not play a major role in ovarian muscle but is essential for female oviposition through generating hydrogen peroxide (H2O2), which is formed by dismutation of the primary NADPH oxidase product superoxide in Drosophila mature follicles [4]. Currently, the genetic evidence supporting Nox function in insect oviposition is limited in D. melanogaster. Much less is known about Nox in other insect species. Nilaparvata lugens is a model insect of Hemiptera because its whole genome sequence has been elucidated [10] and it possesses a highly RNAi-sensitive system [18][19]. In this study, by means of a deep search of the N. lugens genome and transcriptome databases, we identified two Nox sequences, which are the orthologs of human Nox4 and Nox5 genes, respectively. Similarly to the human Nox5 gene with an N-terminal EF-hand calcium-binding domain, N. lugens Nox5 contains five EF-hand domains at its N-terminus, whereas the Nox4 genes of human and N. lugens lack the EF-hand domains in their sequences. Here, we investigated the in vivo functions of Nox5 gene by RNA interference in N. lugens. Our findings revealed that knockdown of Nox5 gene expression resulted in development deficits and the failure of oviposition. RNA interference (RNAi) of Nox5 significantly reduced the production of H2O2 in the ovaries of N. lugens females. This study presents initial in vivo evidence that Hemipteran insects require Nox5 enzyme for development and egg-laying.

2. Identification of an NADPH Oxidase 5 Gene in N. lugens

By searching the N. lugens genomic and transcriptomic databases, we obtained the complete cDNA sequence of an NADPH oxidase 5 (Nox5). The full-length Nox5 sequence is 4401 base pair (bp) long and contains an open reading frame of 3633 bp, a 445-bp-long 5′ untranslated region and a 323-bp-long 3′ untranslated region (GenBank accession no. MT629918). The deduced protein consists of 1210 amino acid residues (Figure 1A). Amino acid sequence alignment showed that Nox5 proteins of the different insects contain the characteristic calcium-binding EF-hand motifs at the N-terminus, two transmembrane ferric reductase domains and the binding domains for flavin adenine dinucleotide (FAD) and nicotinamide adenine dinucleotide (NAD) at the C-terminus (Figure 1A). The Nox5 proteins of Hemipteran N. lugens, Hymenopteran Apis mellifera and Coleopteran Tribolium castaneum have five classical EF-hand motifs at their N-terminus, whereas Hemipteran Acyrthosiphon pisum, Dipteran D. melanogaster and Lepidopteran B. mori Nox5 proteins only have four EF-hand motifs (Figure 1A). The phylogenetic analysis revealed that N. lugens Nox5 cluster with the orthologs of Hemipteran insect species, which are closely related to the Coleoptera cluster, but are distant from the Hymenopteran, Lepidopteran and Dipteran clusters (Figure 1B).

3. Effect of Nox5 Knockdown on Oviposition of Female Adults 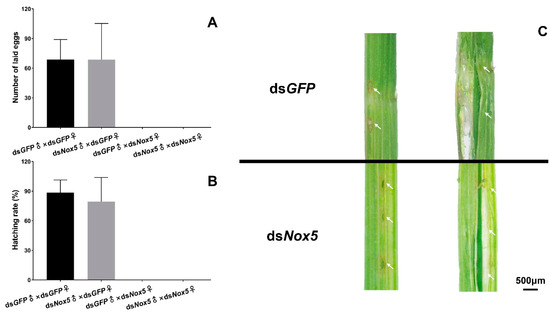 Furthermore, we observed that dsNox5-treated female adults displayed an obviously swollen abdomen and the stretched intersegmental membranes in the tergum at the 12th day after mating with males, whereas the female controls completed oviposition and showed flat abdomens at the 12th day after mating with males (Figure 3A). We dissected the ovaries of dsNox5-injected female adults that mated with dsGFP-treated males to calculate the number of mature oocytes and to observe the morphological changes of oocytes. Reduction in the number and malformation of oocytes was not observed in the ovaries of dsNox5-injected females from the 4th to the 12th days after mating with males. Generally, N. lugens female oviposition begins at the 3rd–4th days after mating and egg-laying is completed around the 8th–12th days, at which time a few mature oocytes remain in the ovaries (Figure 3B). However, in dsNox5-injected females, the ovaries were full of banana-shaped mature oocytes at the 4th–12th days after mating. Interestingly, we found a mature oocyte located at the lateral oviduct in a dsNox5-treated female individual, but this oocyte could not be laid in the rice leaf sheaths (Figure 3B). Video indicated that the dsNox5-treated females tried their best to lay eggs from the ovipositor onto rice leaf sheaths but failed, while dsGFP-treated females successfully laid eggs on the rice leaf sheaths. To understand whether dsNox5 treatment influences ROS production, we measured H2O2 content in the ovaries of females at the 8th day after mating. Nox5 knockdown led to a significant reduction of H2O2 content by 87% and 89% in the ovaries of dsNox5-injected females compared with those of dsGFP-treated and non-treated female controls, respectively (Figure 3C), suggesting that Nox5 is important for H2O2 production.

Figure 3. RNAi of Nox5 effects on oocyte formation in female ovaries. (A) Observation of the body change in female adults after RNAi. The 5th-instar nymphs were injected with dsNox5 and the female adults that mated with males at the 10th day were used to observe the body morphology. The left and right images show the back and lateral views of dsGFP- and dsNox5-injected females, respectively. (B) The ovaries were dissected from the dsNox5-treated female adults at the 2nd, 4th, 6th, 8th, 10th and 12th days after mating and were observed under a Leica S8AP0 stereomicroscope. The enlarged circles show the mature oocytes in the lateral oviduct of the female adults. Sp, spermatheca, Ooc, oocyte, Ov, oviduct, Bc, bursa copulatrix. (C) The H2O2 content in the ovaries of dsNox5-treated female adults at the 8th day after mating was determined by means of a Hydrogen Peroxide Assay Kit (Beyotime Biotech, Shanghai, China). Naive and dsGFP-treated insects were used as controls.

Nox5 plays an important role in the molting transition from nymph–nymph and nymph–adult in N. lugens. Nox5 is a key enzyme in the oviposition process of the mature oocytes from the N. lugens ovipositor to rice leaf sheaths. Our findings provide valuable information for a better understanding of the biological roles of Nox-generated ROS in development and oviposition mechanisms in insect species. This work will be useful for producing a potential target gene for the management of rice pests in the future.