Developments in cancer immunotherapy mean that complex cancer animal models which accurately relfect the tumor and its environment are required now more than ever. Mice remain good animals to investigate as they are relatively inexpensive, have short reproductive cycle, exhibit high tumor growth rates, and can be genetically modified. Despite being good models, some drugs which look promising in murine models still fail when trialed in humans. Increasing reliability is essential and the tumor model must reflect the tumor and its microenvironment including immune cells, to which the action of immunotherapeutic drugs are directed. This review investigates discusses the current immunocompetent and immunocompromised mouse models used to evaluate the effectiveness of immunotherapeutic agents, in particular chimeric antigen receptor (CAR) T-cells and immune checkpoint inhibitors.

Transplantation of in vitro cultured tumor cells into immunocompetent mice is the oldest and most commonly utilized approach to investigate antitumor therapy, including immunotherapy (Figure 1A) [1]. Spontaneous, carcinogenic or transgenic tumor cell lines can be transplanted into such mouse strains as C57BL/6, BALB/c and FVB [2][3][4][5][6]. The creation of such models takes a short period of time, since transplanted subcutaneously or intravenously cells grow in the animal within a few weeks [7]. The fast kinetics of tumor growth in syngeneic models often provides an inadequate time interval for evaluating the effectiveness of immunotherapy, since usually the effect of immunomodulating treatment develops gradually and is estimated by increasing survival rate [1]. Also, in syngeneic models it is impossible to evaluate the effectiveness of immunotherapeutic drugs at earlier stages of the tumor development [8]. 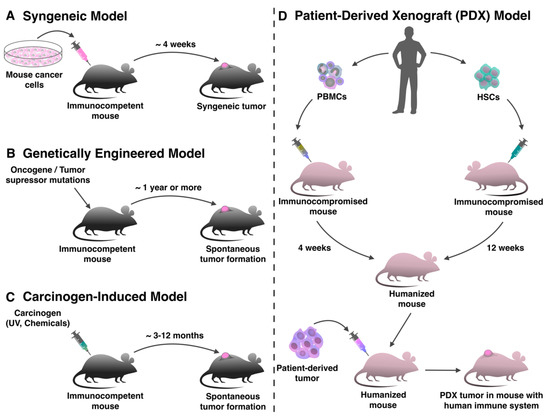 Figure 1. Production of mouse tumor models for evaluation of immunotherapy. (A) Syngeneic tumor models are produced by transplanting mouse tumor cell lines into immunocompetent animals in a short period of time. (B) In genetically engineered tumor models, the tumor forms de novo as a result of specific genome modification. (C) In mice treated with carcinogens, the tumor also forms spontaneously de novo. (D) For the production of patient-derived xenograft (PDX) models with human immune system immunocompromised mice can be humanized with peripheral blood mononuclear cells (PBMCs) or hematopoietic stem cells (HSCs), and after that transplanted with a human tumor.

Undoubtedly, the formation of transplanted tumors is different from tumors originating de novo. Moreover, the tumor microenvironment will be mostly determined by the local innate immune response triggered by injection-induced inflammation and the presence of a large number of tumor cells [9][10]. Usually, tumor cells are injected subcutaneously, as it is easier to track tumor development [11]. In order to make TME closer to that of people, the tumor cells can be orthotopically transplanted into the corresponding organs [12], such as intravenous administration of leukemia and lymphoma cells [13], injection of breast tumor cell lines into mammary adipose tissue [14], intrapancreatic injection of pancreatic duct adenocarcinoma [15], and intracranial injection for glioblastoma cell lines [16][17]. These administration routes more accurately reflect TME, but require more complicated manipulations and special equipment for both the transplantation and monitoring of the further tumor development [18].

Besides the fact that TME may prove to be unnaturally homogeneous, the syngeneic model of the tumor also lacks genomic heterogeneity, which makes each tumor unique [19]. The absence of mutational heterogeneity in syngeneic tumors is partly due to the absence of cancer stem cells and other populations of progenitor cells that are presented in TME and provide a constant source of new mutations for tumor evolution [20]. In addition, cells intended for transplantation often undergo adaptation to harsh in vitro or in vivo conditions, which leads to a decrease in the heterogeneity of tumor cells [21].

To study the effectiveness of CAR T-cell therapy in syngeneic models, mouse cell-derived CAR-T-cells are used [22]. Mouse models allow the toxicity of CAR T-cells to be determined, which depends on both the dose and the presence of co-stimulatory domains in the chimeric receptor [23]. A syngeneic model of lymphoma in BALB/c mice originally showed that first-generation CAR T-cells (without co-stimulatory domains) killed lymphoma cells, but did not cause side effects [24]. In contrast, second generation CAR T-cells with CD28 co-stimulatory domain induced B-cell aplasia and chronic toxicity, accompanied with an increase in the number of suppressor cells. It is worth noting the toxicity described above has not been observed in lymphoma models created in C3H or C57BL/6 mouse strains, which means the results vary depending on the mouse strain [25].

Syngeneic tumor models are also used to investigate the antitumor activity of ICIs, including anti-cytotoxic T lymphocyte-associated antigen-4 (CTLA-4) [26] and anti-programmed death (PD)-1 anti-PD-L1 antibodies [17][27]. For example, using the syngeneic model of immunocompetent B6 mice transplanted with E.G7 hematopoietic cell line or its analogue with PD-L1 deficiency it has been shown that the PD-L1 pathway blockade contributed to the rejection of tumor cells in mice transplanted with both wild-type (WT) E.G7 cells or PD-L1 deficient E.G7 cells in the same degree. Thus, the expression of PD-L1 on the cells of TME (either tumor infiltrating leukocytes or stromal cells) may contribute more significantly than the expression of PD-L1 on tumor cells [28]. One of the significant drawbacks of using syngeneic models to evaluate the effectiveness of ICIs is that the rapid growth of the tumors in syngeneic mouse models does not contribute towards the development of the chronic inflammatory environment typical for human tumors. Whilst during tumor formation, immunological inhibitory pathways associated with inflammation, such as the PD-1/PD-L1 axis, are activated, which contributes significantly to TME remodeling [29]. This is based on the paper by Daria S. Chulpanova, Kristina V. Kitaeva, Catrin S. Rutland, Albert A. Rizvanov and Valeriya V. Solovyeva.