Understanding and investigating tumors is carried out by researchers using a number of different methods. One exciting and promising area is 3D tumor models including spheriod and organoid models. They act in similar ways to tumors which means we can use them to gather important information. This ranges from the way tumors react through to how different treatments may work on tumors. Ultimately they may help guide us towards the types of drugs and therapies that could be used to treat tumors. This work gives an overview of these technologies, the types of 3D models available and how they can be used to improve treatments and their applications in personalized medicine.

Tumors are not all the same, over 100 different types have presently been identified. Understanding each tumor and how they develop and react to treatments and therapies is essential. There are a number of technologies used to obtain 3D tumor models, which are developed and take into account the characteristics of a native tumor [1]. Spheroids and organoids can be distinguished among them [2]. The 3D tumor spheroids are self-organizing cultures of tumor cells with a rounded morphology and predominant intercellular interactions [3][4]. Spheroids can proliferate and grow as free-floating structures [5]. Tumor spheroids larger than 500 µm in diameter are often characterized by hypoxic areas and necrotic centers and the formation of zones occurs due to the lack of nutrients and limited oxygen transport [6]. A feature of the spheroid inner part is an acidified microenvironment (pH range 6.5–7.2) [7]. In response to the low pH level of the environment, cells in the senescent and necrotic zones begin to produce factors that enhance the proliferation of malignant cells and their survival [8]. 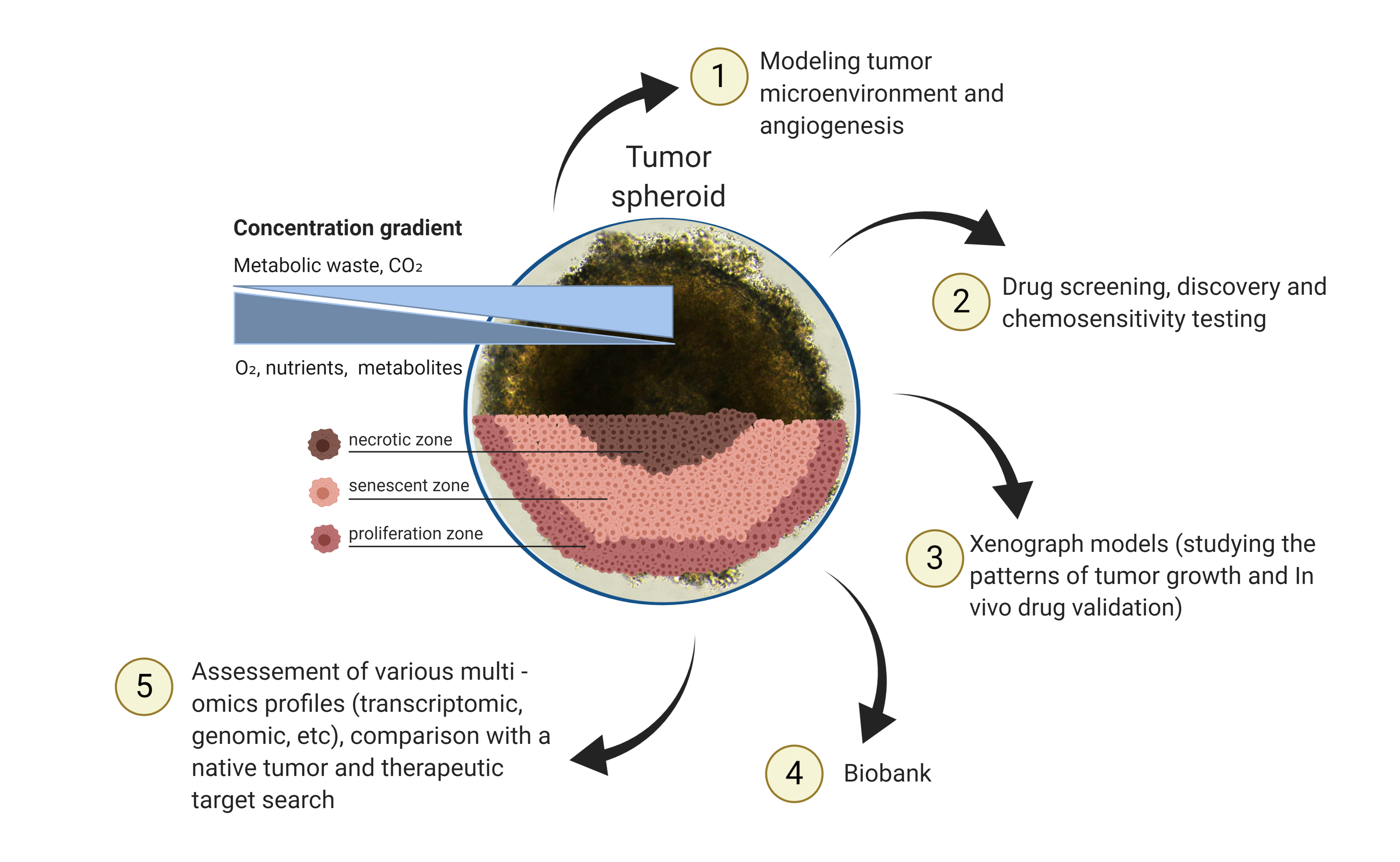 There are several types of tumor spheroids or spheres. The most frequently used spherical models include: (I) a multicellular spheroid which was obtained by culturing tumor cell lines on non-adhesive culture dishes; (II) an oncosphere, which is a model of expansion of cancer stem cells (CSCs) in a serum-free medium supplemented with growth factors; and (III) an organotypic multicellular spheroid obtained by mechanical and enzymatic dissociation of tumor tissue [1].

Currently, several terms are used to describe spheroids. The terms “sphere”, “tumor sphere” [9] and “oncosphere” [10] are used to describe the spheres obtained from CSCs. Tumor spheres are a mixture of CSCs and tumor cells, since CSCs are known for their ability to proliferate and differentiate [11]. This model is commonly used to evaluate and characterize CSCs in vitro [12]. Enrichment with tumor stem cells gives certain properties to spheres, the study of which is of clinical importance. The name of the spheres can arise from whichever tissue the spheroid is derived from. For example, the spheres of the brain and mammary gland stem cells were called “neurospheres” [13] and “mammospheres” [14], respectively. Spheres from the colon cancer cell line were called “colonospheres” [15]. Later, the spheres were called “spheroids” [16].

Organotypic multicellular spheroids are required for accurate reproduction of TME. Tumor cells in these spheroids are surrounded by non-tumor cells and stromal components that are commonly found in TME [12]. There are several methods for obtaining organotypic tumor spheroids, including enzymatic dissociation of tissues to isolate spheroids with cellular heterogeneity, similar to the primary tumor [17]. In many cases, these cultures are created using mechanical dissociation of tumor tissues. As a result, this model is capable of proliferation and can retain many of the histological features within the original tissues [12][18].

The creation of multicellular tumor spheroids usually occurs by culturing tumor cell lines under normal conditions similar to 2D cultures. Therefore, multicellular tumor spheroids can be methodologically considered as an extension of standard 2D culture of tumor cell lines [12]. The main difference from 2D cultures is that cells in this model are grown in the form of spheres in suspension cultures or in other conditions that promote intercellular adhesion. Unlike other spheroids, multicellular tumor spheroids have a lower histological similarity when compared to native tissue. However, these spheroids maintain the metabolic and proliferative properties of the primary tumor and may exhibit chemoresistance [19]. The advantages of this model, compared to other 3D systems, are cell clonality, ease of maintenance and genetic manipulation. This makes spheroids a suitable tool for high-throughput drug screening [20].

All listed models are used in studies of chemoresistance, radioresistance, oncogenicity, invasion and migration. Despite the fact that spheroids have a common three-dimensional conformation, various methods of their preparation allow for creation of spheroids with additional properties. Thus, selection of the most appropriate spherical tumor model should be carried out based upon the purpose of the investigation and the type of tumor.

Organoids are also a type of 3D cell culture. This term is usually used for a three-dimensional culture of normal cells and tissues [21][22]. They are aggregates of different cell types, often used in combination with a biocompatible three-dimensional scaffold. Organoids are capable of self-renewal, self-organization and the manifestation of the functionality of the organ that it imitates. Organoids maintain a cellular composition and structure similar to the tissue from which they originate. When organoids are generated, various cell types occupy their own niches, which ensures that their interactions, and physiological similarities are preserved. These cell equivalents can be cryopreserved and multiplied [23]. Organoids can be obtained from embryonic or induced pluripotent stem cells [24]. Organoid cultures derived from adult stem cells were created from leucine-rich repeat-containing G-protein coupled receptor 5 (Lgr5)-expressing mouse intestinal stem cells [25].

Similarly, this term is used for 3D tumor cell structures. Whitehead et al. spontaneously cultivated LIM1863 colon carcinoma cell line as organoids [26][27]. To date, organoids of tumors have been obtained from various organs, including the colon [28][29], pancreas [30], breast [31], stomach [32], lung [33], esophagus [34], urinary bladder [35], kidney [36] and liver [37]. It should be noted that one of the important features of tumor organoids is that they are genetically and phenotypically more similar to a native tumor, forming intratumoral heterogeneity [29][31][32]. In conclusion, 3D tumor models of spheroids and organoids can become transitional links between in vitro and in vivo studies and play vital roles in testing new pharmaceutical compounds.

Recently, the search for an effective in vitro screening system for anticancer agents has been one of the most important tasks in medicine. The development of 3D tumor models can significantly increase the efficiency of screening for therapeutic drugs. Moreover, the next generation of anticancer drugs should focus on the malignant phenotype (growth, migration, invasion and angiogenesis of a tumor), not just cell proliferation. The 3D tumor models can provide a unique platform for studying important cancer events not available through other models. For example, xenograft models are closer to native tissue, but they are expensive, laborious and do not lend to high-throughput drug screening. It is difficult to develop xenograft models for slowly growing cancers. Another promising direction is the creation of the organ-on-a-chip model. This model allows recreating tissue–tissue interfaces and a dynamic physical microenvironment. However, the advantage of spheroids/organoids is the ability to get quick results and to increase the number of experimental replicas compared to the organ-on-chip model.

The use of 3D tumor models in personalized medicine, undoubtedly, remains a promising direction in the therapy of oncological diseases. The use of various approaches to study 3D patient models, such as genomic, metabolomic and proteomic approaches, will significantly improve the prediction of drug response and dosing regimens. The study of 3D model epigenetics will allow for the development of epigenetic change inhibitors and the creation of epigenetic drugs. It should be noted that the development of a personalized screening system is just beginning to grow, and for its successful implementation in practice, there are still many problems to be solved and drawbacks to be eliminated. The problems include the impossibility of expanding some lines of organoids for a long time, which can be eliminated by improving the nutrient medium; growth factors or low molecular weight inhibitors in the culture medium can have a significant effect on gene expression and signaling pathways in organoids, which can affect drug sensitivity. Perhaps, in order to obtain reliable results, it is advisable to combine various methods and model systems for the study of a tumor, which will improve the prediction and predictability of screening anticancer drugs systems.