Nitrogen impurity has been introduced in diamond film to produce a nitrogen vacancy center (NV center) toward the solvated electron-initiated reduction of N2 to NH3 in liquids, giving rise to extend the wavelength region beyond the diamond’s band. Scanning electron microscopy and X-ray diffraction demonstrate the formation of the nanocrystalline nitrogen-doped diamond with an average diameter of ten nanometers. Raman spectroscopy and PhotoLuminescence (PL) spectrum show characteristics of the NV0 and NV− charge states. Measurements of photocatalytic activity using supraband (λ < 225 nm) gap and sub-band gap (λ > 225 nm) excitation show the nitrogen-doped diamond significantly enhanced the ability to reduce N2 to NH3 compared to the polycrystalline diamond and single crystal diamond (SCD). Our results suggest an important process of internal photoemission, in which electrons are excited from negative charge states into conduction band edges, presenting remarkable photoinitiated electrons under ultraviolet and visible light. Other factors, including transitions between defect levels and processes of reaction, are also discussed. This approach can be especially advantageous to such as N2 and CO2 that bind only weakly to most surfaces and high energy conditions.

This paper aimed to provide a feasible and efficient approach to achieve photochemical reduction of difficult-to-reduce species such as N2 and CO2 that bind only weakly to most surfaces and high energy conditions by using wide bandgap semiconductors. photo-illuminated diamond can act as solid-state electron source in liquids for photocatalyst owing to its negative electron affinity. And, introducing nitrogen impurity levels into diamond, whose excited states are close to the band edges, while the ground states are in the middle of the band gap, can extend the wavelength region beyond diamond’s band. Meanwhile, we also believe that transitions between NV- and NV0 in nitrogen doped diamond nanoparticles contribute to photocatalyst and the solvated electrons served as an intermediate because it reacts with H+ to form H•, combined with nitrogen to ammonia. Our result suggests that nitrogen doped diamond nanoparticles may provide a scalable approach to achieving difficult photocatalytic.

It has been known that the hydrogen terminated diamond, whose conduction-band edge lies 0.8–1.3 eV above the vacuum level, can emit electrons without any barrier when illuminated by light with bandgap above 5.45 eV .Nitrogen impurity has been introduced in diamond film to produce a nitrogen vacancy center (NV center) toward the solvated electron-initiated reduction of N2 to NH3 in liquids, giving rise to extend the wavelength region beyond the diamond’s band. Ammonia has been widely utilized as an important energy carrier, fertilizer precursor, and fuel because of its high hydrogen density, low liquefying pressure, and carbon-free emission.[1][2][3][4]  Despite its importance, production is still heavily dependent on the energy intensive Haber–Bosch process owing to harsh conditions (typically 300–500 °C and 200–300 atm) [5][6][7]. Compared with the Haber–Bosch method, nitrogen fixation of photocatalyst can be promoted at room temperature and pressure with clean and energy-rich solar energy as the driving force. Water and nitrogen as raw materials have a wide range of sources [8][9][10]. In addition, the electrocatalytic nitrogen reduction to synthesize ammonia requires solar, wind, and tidal energy to be converted into electrical energy first, and then the nitrogen fixation process can be realized through the electrocatalytic process[11][12][13]. Therefore, the photocatalytic nitrogen reduction to produce ammonia has a low cost and provides an alternative new method for ammonia synthesis. However, photocatalytic transformations from N2 to NH3 at semiconductor surfaces are typically limited by adsorption and activation of nitrogen molecules. Owning that the cleavage of strongest bond (N≡N triple bond) is extremely difficult, the critical step on formation of N2 + e− + H+→N2H requires approximately 3 eV of energy [14][15]. Hence, the efficiency of production is still ultralow from N2 by the electrosynthesis process.

Researchers reported a strategy to endow a boosting performance on nitrogen reduction reaction (NRR). Nitrogen-doped diamond with negative electron affinity (NEA)as electron source to reduce N2 to NH3 can be facilitated without any contact between nitrogen and diamond. We also compared performance between nitrogen-doped polycrystalline diamond film (NDD), single crystal diamond (SCD) film, and non-doped polycrystalline diamond (PD) film. The results show that the nitrogen-doped diamond film has a much better performance under sub-band gap illumination, since negative charge state can give rise to photoinitiated electrons, owing that excited states are close to the band edges.

The nitrogen-doped nanocrystalline diamond film was produced and consisted of randomly oriented well-faceted grains. As shown in Figure 1a, the appearance looks like clouds cluster. Such porosity can achieve high active site density. When the image is enlarged 50 times , small nanoparticles with an average diameter of more than 10 nanometers can be observed. As depicted in Figure 1b, polycrystalline diamond film with larger grains shows obvious boundary with tens of micro grain diameter. Additionally, there is no cluster spherical shape. For the purpose of preventing the influence of CN species that are on the N-doped diamond surface or in the grain boundaries, single crystalline diamond (SCD) film was studied for a contrast. Clearly, in Figure 1c, the surface of SCD was flat with no grand boundaries. The film thicknesses of all samples were 200 nm. Actually, photocatalytic oxidation activity occurs more easily in grain boundaries. Since, it is weak bonds between grain boundaries that might be broken by the irradiation, resulting in a higher probability of oxygen radicals, such as O3. The oxygen radicals are produced by the reaction induced by UV light just at the top of the diamond surface with water during the photo-irradiation process [16][17][18].

Raman spectroscopy is employed for analyzing the composition of chemical vapor deposited diamond films, mainly because the scattering effect of graphite and amorphous carbon (peaks on 1520 cm−1) is very obvious and 1332 cm−1 has been recognized as a characteristic peak derived from sp3 diamond crystals [19][20]. Wherefore, the 632 nm laser photoexcitation was used to measure Raman spectra of N-doped diamond, and undoped poly-crystalline diamond, as shown in Figure 2a, b, respectively. Peaks on 1332 and 1520 cm−1 represent diamond and graphite in Raman spectra of the nitrogen-doped diamond film, which means D (diamond) and G (graphite) bands. Differently, the peak on 500 cm−1 as a result of silicon substrate in the polycrystal diamond film is much higher than it is in the nitrogen diamond film. 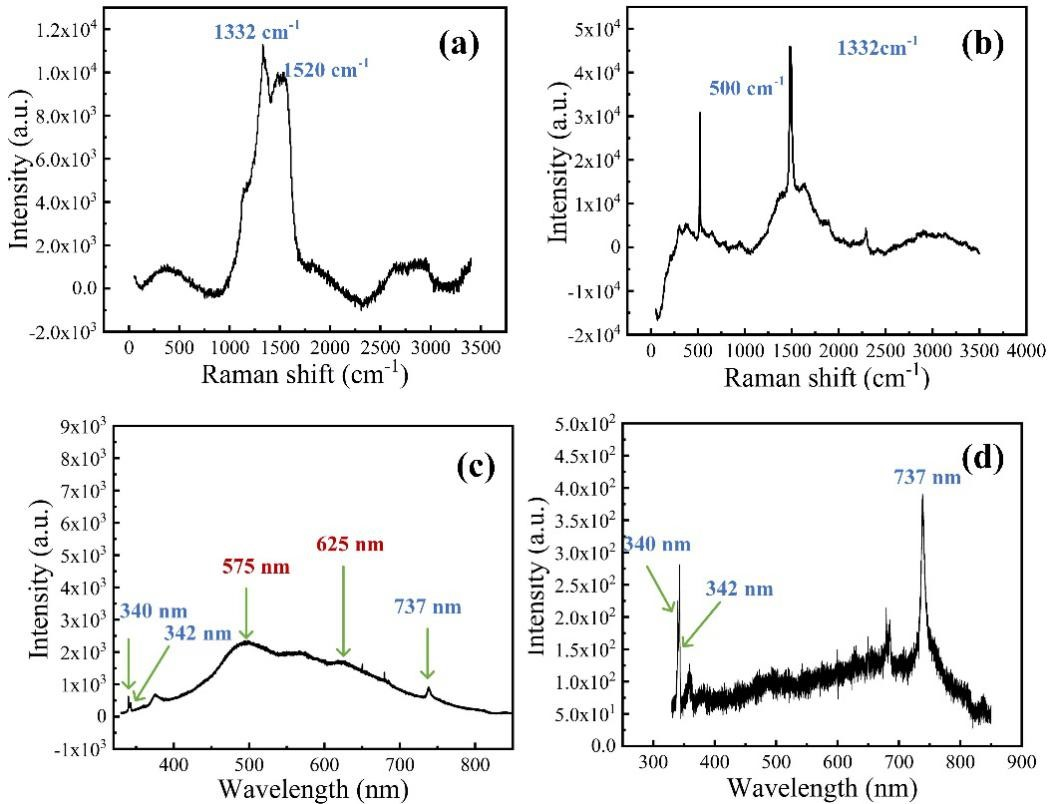