Subjects: Others
View times: 212
Submitted by:

1. Multimodal Emotion Recognition based on BCI

Single modality information is easily affected by various types of noise, which makes it difficult to capture emotional states. D'mello [1] used statistical methods to compare the accuracy of single-modality and multimodal emotion recognition using a variety of algorithms and different datasets. The best multimodal emotion-recognition system reached an accuracy of 85% and was considerably more accurate than the optimal single-modality correspondence system, with an average improvement of 9.83% (the median was 6.60%). A comprehensive analysis of multiple signals and their interdependence can be used to construct a model that more accurately reflects the potential nature of human emotional expression.

The signal flow in a multimodal aBCI system is depicted in Figure 1. The workflow generally includes three stages: multimodal signal acquisition, signal processing (including basic modality data processing, signal fusion and decision-making) and emotion reflection control. These stages are described in detail below: 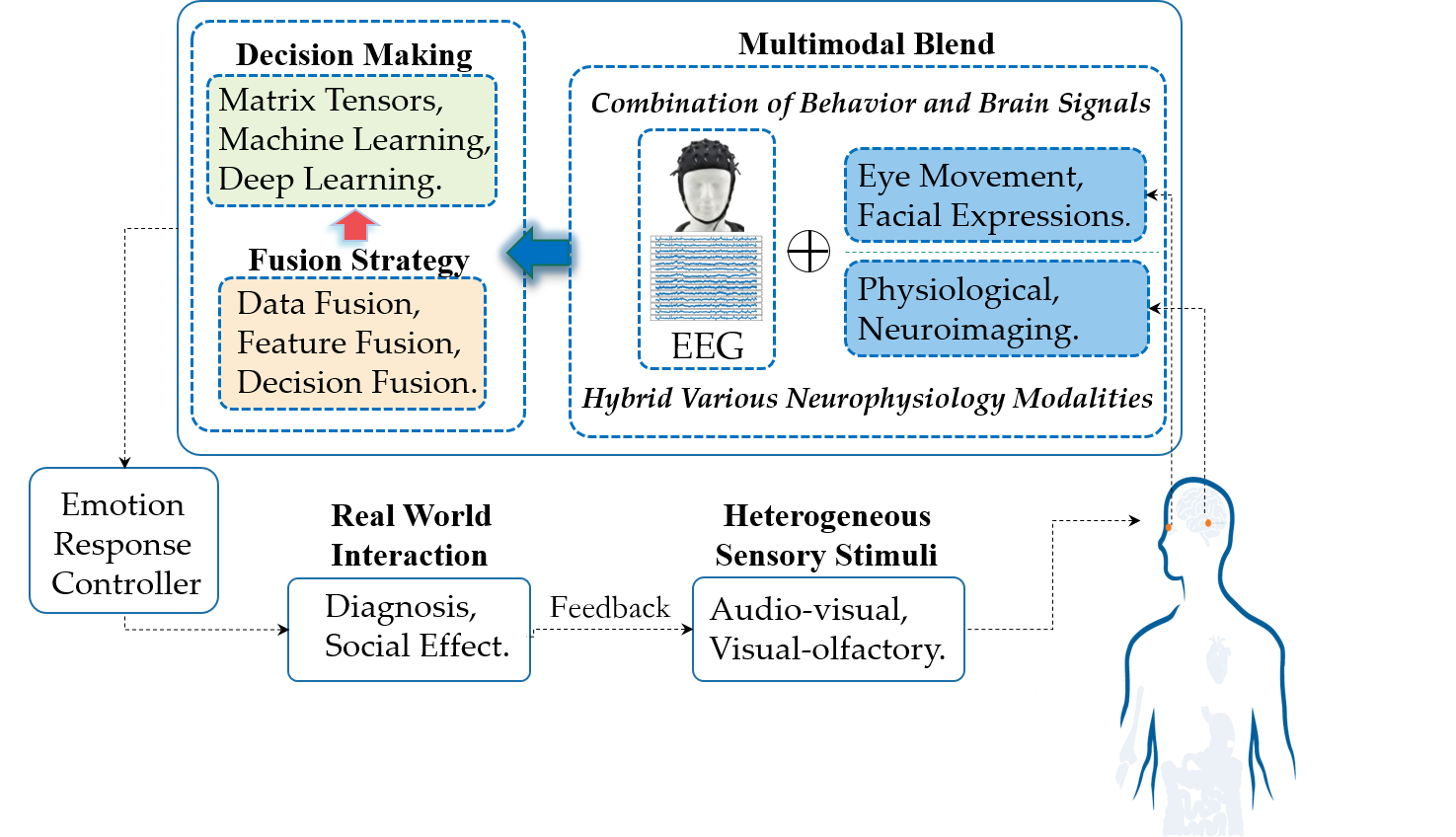 2. Combination of Behavior and Brain Signals

The core challenge of multimodal emotion recognition is to model the internal working of modalities and their interactions. Emotion is usually expressed through the interaction between neurophysiology and behavior; thus, it is crucial to capture the relationship between them accurately and make full use of the related information. 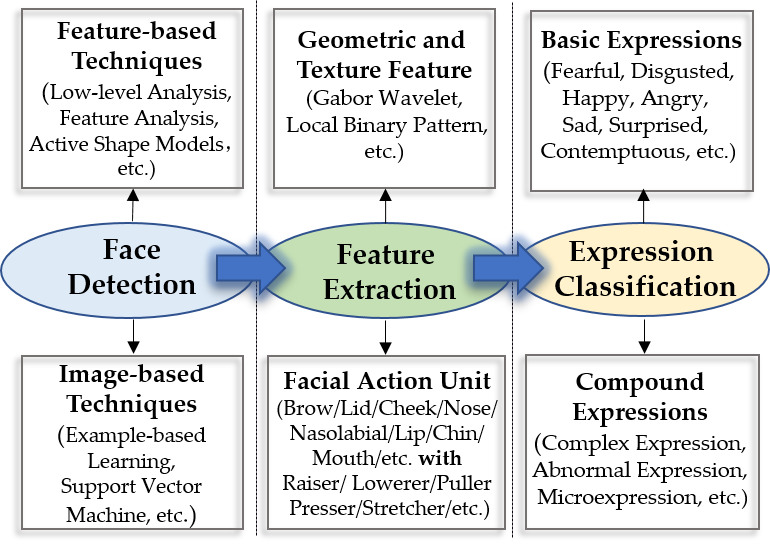 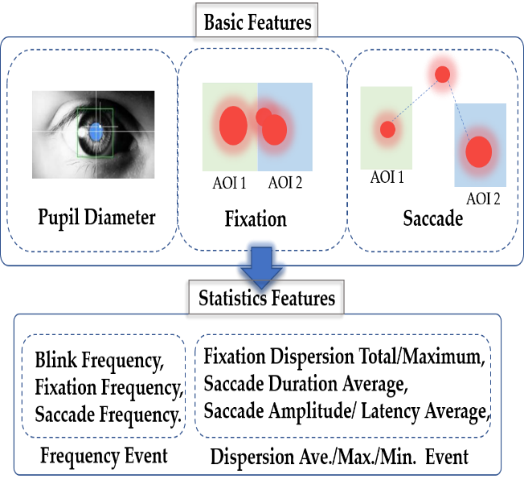 Emotion usually refers to a state of mind that occurs spontaneously rather than consciously and is often accompanied by physiological changes in the central nervous system and the periphery, affecting EEG signals and heart rate. Many efforts have been made to reveal the relationships between explicit neurophysiology modalities and implicit psychological feelings. 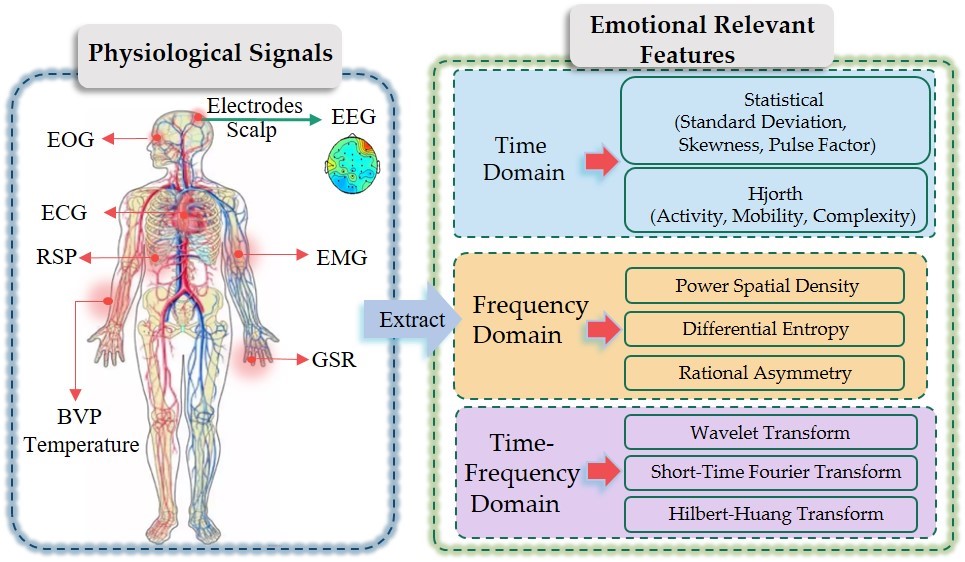 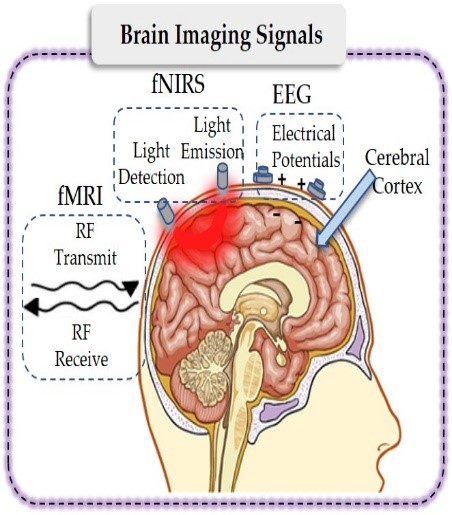 Figure 3. (a) Relevant emotion features extracted from different physiological signals. Physiological features and where they were collected are listed, such as   temperature. We can extract emotionally relevant features from these physiological signals that change over time in three dimensions: the time, frequency and time-frequency domains; (b) Measurement of brain activity by EEG, fNIRS and fMRI. Briefly, we introduced how these three kinds of brain imaging signals collected from the cerebral cortex work with fMRI based on radio frequency (RF) transmit and RF receive; fNIRS is based on light emission and light detection and EEG is based on electrical potentials.

In the study of emotion recognition, to better simulate, detect and study emotions, researchers have employed use a variety of materials to induce emotions, such as pictures (visual), sounds (audio) and videos (audio-visual). Many studies have shown that video-induced stimulation based on visual and auditory multisensory channels is effective because audio-visual integration enhances brain patterns and further improves the performance of brain–computer interfaces. Vision and audition, as the most commonly used sensory organs, can effectively provide objective stimulation to the brain, while the induction ability of other sensory channels, such as olfaction and tactile sensation, is still lacking. As the most primitive sense of human beings, olfaction plays an important role in brain development and the evolution of human survival. Therefore, in theory, it can provide more effective stimulation than can vision and audition.

Emotion recognition based on BCI has a wide range of applications that involve all aspects of our daily lives. This section introduce potential applications from two aspects: medical and nonmedical.

Depression is a serious mental health disease that has high social costs. Current clinical practice depends almost entirely on self-reporting and clinical opinions; consequently. There is a risk of a series of subjective biases. The authors of[5]used emotional sensing methods to develop diagnostic aids to support clinicians and patients during diagnosis and to help monitoring treatment progress in a timely and easily accessible manner.

Mood disorders are not the only criteria for diagnosing autism spectrum disorders (ASD). However, clinicians have long relied on the emotional performances of patients as a basis for autism. The results of the study in [6] suggested that cognitive reassessment strategies may be useful for children and adolescents with ASD. Many studies have shown that emotion classification based on EEG signal processing can significantly improve the social integration abilities of patients with neurological diseases such as amyotrophic lateral sclerosis (ALS) or acute Alzheimer's disease[7].

In the field of education, students wore portable EEG devices with an emotion-recognition function, allowing teachers to monitor the students’ emotional states during distance instruction. Elatlassi[8] proposed to model student engagement in online environments using real-time biometric measures and using acuity, performance and motivation as dimensions of student engagement. Real-time biometrics are used to model acuity, performance and motivation include EEG and eye-tracking measures. These biometrics have been measured in an experimental setting that simulates an online learning environment.

In entertainment research and development, we can build a game assistant system for emotional feedback regulation based on EEG and physiological signals that provided players with a full sense of immersion and extremely interactive experiences. In the study of[10], EEG-based "serious" games for concentration training and emotion-enable applications including emotion-based music therapy on the web were proposed and implemented.