The thymus is a primary lymphoid organ derived from the endoderm of the 3rd pharyngeal pouch implicated in the maturation of thymocytes and, therefore, key for establishing the immune surveillance. This organ does not contain self-renewing lymphoid precursor cells and therefore, is colonized by lymphoid precursors coming either from the fetal liver through mesenchyme or from the adult bone marrow via the blood vessels [1]. Within the thymus, the developing thymocytes move throughout a 3D thymic epithelial (TE) network, interacting with the thymic epithelial cells (TECs) of two histologically different compartments: the cortex and the medulla [2].

1. Thymic Epithelium Is Originated from Epithelial Progenitors (TEPCs) whose Nature Is Controversial

As mentioned above, TE derives from the endoderm of the 3rd pharyngeal pouch [1]. In this early thymic primordium, a common bipotent thymic progenitor cell was identified capable of giving rise to both committed cTEC precursors and mTE progenitor cells [3][4][5][6][7][8]. However, the phenotype of these cells is a matter of discussion and other studies have reported the existence of lineage-specific progenitor cells either for cTECs or mTECs [9][10]. In this respect, it is important to remark that embryonic thymic epithelial progenitor cells (TEPCs) express cell markers (i.e., β5t, CD205, IL7) specific of the cTEC lineage of adult thymus [11][12][13]. These results supported a model of serial progression for explaining the establishment of two major TEC subsets, cortical and medullary. Recently, single cell-RNA sequencing analysis [14] confirmed that most embryonic TECs show a strong cTEC footprint. According to this model, TEPCs would be committed to the cortical epithelial cell lineage by default, whereas the differentiation into mTECs would require the activation of a medullary specific transcriptional program together with the downregulation of cTEC committed genes [15].

On the other hand, embryonic and adult TEPCs seem to be different. Some studies have reported that adult thymi do not contain TEPCs with characteristics of cTECs [9][10] and others remark that bipotent TEPCs do exit in the adult thymus but exhibiting their own molecular characteristics [3][4][5][16]. In any case, adult TEPCs apparently lose their embryonic features, whereas committed progenitor cells either with cTEC or mTEC lineages appear [5][9][10][14][17].

Reported cTEC specific cell markers are few (i.e., K8, Ly51, CD205) and, consequently, it is difficult to establish conclusively both the phenotype and function of cTEC subsets. The existence of bipotent TEPCs has been reported in a small subset of CD45−EpCAM+Ly51loUEA1−/loMHCIIloIntα6hiSca-1hi TECs [4]. This epithelial cell population is radioresistant and proliferates during thymic regeneration [18]. Previously, Shakib et al. [19] had described a CD205+CD40− cTEC progenitor population enriched in proliferating cells that expressed lower levels of cTEC-specific transcripts (i.e., β5t and cathepsin L), than the more mature cTECs. In addition, a small subset of CD205+ TECs has been reported as immature cTECs [11].

The cortical epithelium is involved in the maturation of DN thymocytes into DP cells through the production of IL7 [20][21] and the surface expression of several Notch ligands, largely Delta-like 4 (Dll4) [22][23], and presents MHC-peptides to DP thymocytes, an essential process for their positive selection. However, it is unclear which cTEC subset is specifically involved in these functions. In adult thymic cortex, cTEC subsets can be immunohistochemically distinguished according to their levels of Ly51 expression. Ly51hi cTECs occupy both the cortico-medullary border and the subcapsule, whereas Ly51lo cells occur throughout the cortex. By flow cytometry, Ly51hi cTECs were MHCIIhi and the Ly51lo cell subset correlated with the MHCIIlo ones [24][25][26]. In addition, adult Ly51hi cTECs express Dll4, whereas most of the Ly51lo cell subset is Dll4− [26][27][28][29]. Accordingly, Ly51hi cTEC might represent a niche for DN cells whereas Ly51lo ones would constitute the niche where DP thymocytes are selected [26].

During their journey throughout thymic cortex, developing thymocytes undergo selection twice. DN3 (CD4−CD8−CD44−CD25+) cells rearrange the TCRαβ alleles [30]; those successfully arranged TCRβ chains are associated with an invariant pre-Tα chain constituting a pre-TCR that apparently does not recognize any ligands [31], but presumably oligomerizes [32], and signals resulting in important proliferation and progression to the DP cell compartment through DN4 (CD4−CD8−CD44−CD25−) cells and an intermediate, immature SP (CD4+CD8− or CD4−CD8+) stage [30][33]. Then, DP thymocytes that have rearranged mature TCRαβ receptors are again selected by MHC-peptide complexes presented by cTECs, which have special mechanisms for processing these peptides. In the case of MHCI-peptide complexes, cTECs have thymic proteasomes that contain the β5t protein encoded by Psmb11 gene [34]. Apparently, the β5t protein of thymoproteasomes has lower chymotrypsin activity than the subunits of the immunoproteasomes consequently producing different peptides inside than outside the thymus. Intimate relationship between thymoproteosome activity and positive selection has been demonstrated in Psmb11−/− mice that exhibit significantly reduced proportions of CD4−CD8+ SP thymocytes and the remaining cells are functionally compromised showing an altered TCRαβ repertoire [35][36]. In addition, a single-nucleotide polymorphism that produces a thymoproteosome variant (G49s) is associated with the appearance of Sjögren’s syndrome and impairs positive selection of CD4−CD8+ thymocytes [37].

Similarly, the generation of a proper repertoire of selecting MHCII-associated self-peptides depends on the presence of both a thymus-specific serine protease, TSSP and the lysosomal protease, cathepsin L in cTECs. Accordingly, alterations in any of these proteases impair the positive selection of CD4+CD8− SP cells [38][39].

The medulla displays an important array of mTEC subsets whose functions in the thymocyte education has been extensively studied [40][41]. Currently, it is assumed the existence of immature mTECs, mature mTECs implicated in negative selection and the production of Treg cells, and a post mature stage whose functional significance is more controversial.

In addition, mTEPCs seem to be different in embryonic and adult mice. Whereas the former ones include Claudin (Cld)3/4hi progenitor cells, the expression of this cell marker disappears in the postnatal TEPCs, and Cld3/4hi cells seem to be restricted to mature Aire+ and terminally differentiated mTECs [42]. On the other hand, previous reports classified mTECs into immature MHCIIloCD80lo cells (mTEClo or mTEC-I) and mature MHCIIhiCD80hi cells (mTEChi or mTEC-II), but really mTEClo cells constitute a heterogeneous cell population that could contain both TEPCs and terminal post-Aire cells [17][43][44][45][46][47][48]. Therefore, these mTEClo cells presumably consist, at least, of two cell subsets: putative adult mTEPCs, that highly express podoplanin and ligands of CCR7, such as CCL21a, CCL21b, CCL21c [49][50] and predominantly occupy the cortico-medullary border [17][51], and a more mature CCL21-producing mTEC subpopulation involved in the recruitment of positively selected CCR7+ thymocytes into the medulla [17][50]. Furthermore, Aire+ terminally differentiated mTECs downregulate their specific cell markers (i.e., Aire, MHCII, and CD80) giving rise to Aire−/loMHCIIloCD80lo cells that could be therefore phenotypically considered immature mTECs.

Apart from the upregulation of other cell markers, such as MHCII and CD80 involved in the antigen presentation by mTECs, the most representative marker of the mature mTEC population is the transcription factor Aire. Mature mTEChi acquire Aire expression after RANK-RANKL signaling in immature mTECslo. Thus, mice deficient in RANK or RANKL lack Aire+ mTECshi in the embryonic thymus [52][53]. When the deletion of these molecules was tested in neonatal mice, the reduction of mTEChi cells was not complete [54]. In addition, the CD40-mediated effects on mTEC maturation are weaker that those exerted by RANK signals [53][55].

Aire promotes the expression of thousands of TSAs that govern the deletion of autoreactive T-cells [62][63][64][65] and the generation of self-reactive Treg cells [66][67][68]. However, Aire is only expressed in 30% of mTECs and controls the expression of approximately 40% of TSAs [69], but the total pool of TSAs expressed in mTECs is highly diverse covering most of the putative self-antigens [70][71]. These results suggest that other cells and/or molecules would be implicated in the central tolerance (see below). In fact, the expression of Aire-dependent TSAs is both stochastic and ordered: only a small fraction of mTECs express a specific TSAs and, at the same time, there is a general pattern of multiple co-expression of scarcely related types of TSAs within the individual mTECs [72][73][74].

Despite the obvious relevance of Aire expression for the establishment of central tolerance, numerous TSAs are expressed in Aire−/− mTECs [72][75]. As mentioned above, another transcription factor, Fezf2, has been recently reported for promoting the expression of a second group of TSAs distinct from the Aire-dependent TSAs [76]. Fezf2-deficient mice do not have defects in positive selection but show altered repertoire of TCR Vβ in both CD4+ and CD8+ T-cells. Additionally, specific elimination of Fezf2 gene in TECs results in autoimmunity with presence of tissue lymphocyte infiltrations and auto-antibodies [69]. Apparently, Aire and Fezf2 genes are controlled independently and do not regulate each other, although recent results indicate that RANK/RANKL signals are key for the appearance of both transcription factors [77]. In any case, only 60% of TSA genes are regulated by Aire and/or Fezf2 suggesting that there are still other unknown mechanisms for TSA production in the thymus. In this respect, the remaining source of TSAs could be peripheral DCs proposed to transport peripheral TSAs into the thymus and to induce T-cell deletion and Treg cell development [78][79][80][81][82][83]. In addition, mTECs transport self-antigens to intrathymic DCs in an Aire-dependent process [84][85].

Increasing evidence supports that mTEC differentiation continues beyond the Aire+ stages of thymic epithelium development, to give rise to the so-called tuft cells as well as to terminally differentiated epithelial cells that form a part of the named Hassall’s bodies (or corpuscles) [50][86][87]. These terminal epithelial cells express numerous markers of differentiated keratinocytes of the outer epidermal layers, such as keratin 1, keratin 10, involucrins, desmogleins, and Serine protease inhibitor Kazal type 5 (SPINK5) [15]. Whether Aire governs or not this final differentiation of mTECs is a matter of discussion [15]. In addition, the functions of these terminal mTECs are controversial. Although they have lost the MHCII expression making efficient antigen presentation to SP thymocytes difficult, they retain a large fraction of both Aire-dependent and Aire-independent TSA that could transfer to DCs. In addition, human Hassall’s bodies, but not murine ones [88], produce Thymus stromal lymphopoietin (TSLP) that induces Foxp3+ Treg cells [89].

Tuft cells are neonatal epithelial cells, firstly identified in mucosae [90][91] and later in the thymus [17][43][92][93]. Studies of lineage tracing demonstrate that more than half of thymic tuft cells derive from mature mTECshi but the rest do not seem to follow the Aire-expressing cell lineage [17][43]. Furthermore, the genetic signature of thymic tuft cells seems to be unique and, in any case, very different from that of Aire+ mTECs.

On the other hand, the functions of thymic tuft cells are largely unknown. Studies on tuft cell-deficient thymuses grafted in mice immunized with IL25 indicate that tuft cells are key to prevent the generation of anti-IL25 antibodies [43]. However, thymic tuft cells do not appear to be good APC because they weakly express MHCII. In addition, they could be related to other thymic cell subsets because tuft cell deficiency results in reduced numbers of both NKT2 cells and Eomes+CD8+ SP thymocytes [43]. Figure 1 summarizes all these described TECs. 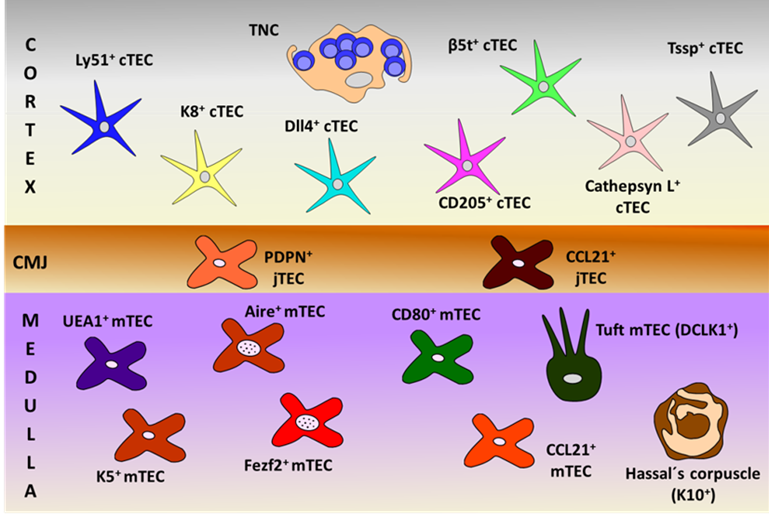