TRPM7 has been cloned and functionally characterized two decades ago[1][2][3]. Since then, extensive investigations have been conducted to clarify the molecular and organismal aspects of the TRPM7 function[4]. Genetic inactivation of TRPM7 in animal models uncovered the critical role of TRPM7 in early embryonic development, immune responses, and the organismal balance of Zn2+, Mg2+, and Ca2+. TRPM7 emerged as a new therapeutic target because malfunctions of TRPM7 have been associated with anoxic neuronal death, tissue fibrosis, tumour progression, and giant platelet disorder.

TRPM7 encodes a bi-functional protein comprising a TRP-type transmembrane channel unit fused to a C-terminal α-type serine/threonine-protein kinase domain[1][2][3]. Similarly to other TRP channels, the channel-coding segment of TRPM7 comprises six transmembrane helixes with a channel pore-forming sequence located between the fifth and six helices (Figure 1A,B). Four TRPM7 proteins assemble in a symmetric channel complex (Figure 1C)[1][2][3]. Hence, one TRPM7 channel moiety is linked to four cytosolic kinase domains. Among other known channels and kinases, only TRPM7 and its homologous protein TRPM6 are known as channels covalently fused to protein kinase domains[5][6][7][8]. The crystal structure of the C-terminal TRPM7 domain revealed the three-dimensional packing of the catalytic domain of the kinase[9]. More recently, cryo-electron microscopy of the truncated TRPM7 protein (lacking the kinase domain) clarified the role of distinct amino acid residues for the tetrameric assembly of the channel segment (Figure 1B,C)[10]. However, the positioning of the kinase and channel units relative to each other in the full-length TRPM7 protein, as well as distinct rearrangements in TRPM7 folding during channel gating, remain unknown[11].

In pioneering patch-clamp experiments, endogenous TRPM7 currents were referred to as magnesium nucleotide-regulated metal ion currents (MagNuM)[1][12] and magnesium-inhibited cation currents (MIC)[13], and were later called TRPM7-like or TRPM7 currents[14][15][16][17][18][19][20]. Such native TRPM7 currents were monitored in a large variety of primary isolated cells and stable cell lines[14][15][16][17][18][19][20]. In accord with biophysical experiments, TRPM7 transcripts were found to be abundantly present in all native tissues examined[14][15][16][17][18][19][20]. TRPM7 was defined as a constitutively active cation channel highly selective for divalent cations such as Zn2+, Ca2+ and Mg2+[1][2][3]. Among other factors, cytosolic magnesium (free Mg2+ or in complex Mg·ATP) and the plasma membrane phospholipid phosphatidylinositol-4,5-bisphosphate (PIP2) were discovered as prime physiological regulators of TRPM7[1][2][3][21]. While intracellular Mg2+ or Mg·ATP directly act as negative regulators of the channel, receptor-dependent phospholipase C activation, and resultant PIP2 depletion indirectly result in TRPM7 inactivation[1][2][3][21]. 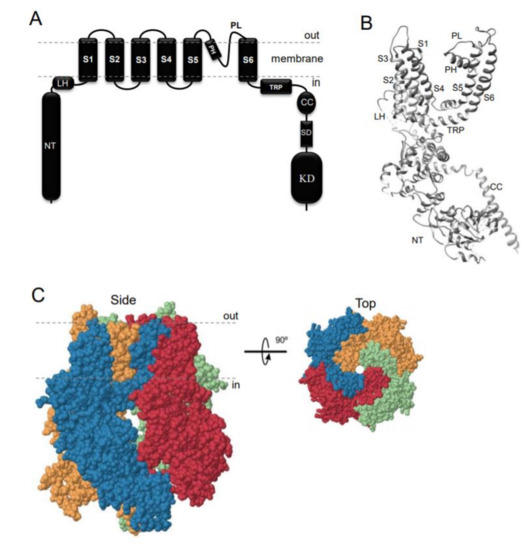 The list of phosphorylation substrates of the TRPM7 kinase is extensive and surprisingly heterogeneous in terms of possible biochemical pathways affected. Thus, TRPM7 kinase can phosphorylate TRPM6[68], annexin A1[69], myosin II isoforms[70], eukaryotic elongation factor-2 kinase (eEF2-k)[71], tropomodulin[72], phospholipase C gamma 2 (PLCγ2)[73], stromal interaction molecule 2 (STIM2)[25], Mothers against decapentaplegic homolog 2 (SMAD2)[59], and Ras homolog family member A (RhoA)[74]. Furthermore, multiple serine/threonine residues positioned in a ‘substrate’ segment of TRPM7 are autophosphorylation targets of the kinase domain[20][75][76][77] . In immune cells, the TRPM7 kinase domain can be cleaved from the channel complex by caspases during Fas-receptor stimulation[35]. Another study reported that the cleaved TRPM7 kinase can be detected in several cell lines and that the released kinase is able to translocate into the cell nucleus to phosphorylate histones[78]. The in vivo relevance of these reactions remains to be verified, because, unlike to the mouse strains with the Trpm7 null mutation, animals carrying the ‘kinase-dead’ point mutation were found to be fertile, and displayed normal pre- and postnatal development, if maintained under regular conditions[59][66][79][80].

3. Drug-like Modulators the Channel and Kinase Activity of TRPM7

In light of the bi-functional nature of TRPM7, there is a growing demand for reliable drug-like molecules allowing for selective and distinct modulation of its channel and kinase moieties. Initially, agents acting as unspecific channel inhibitors, such as spermine[13], ruthenium red[81], trivalent cations[82], SKF-96365[13] and 2-aminoethyl diphenylborinate (2-APB)[83], were used to block the TRPM7 channel. Subsequently, several drug-like molecules were reported as inhibitors of the TRPM7 channel effective only in a high µM range, such as nafamostat[84], carvacrol[85][86][87][88][89], 5-lipoxygenase inhibitors (NDGA, AA861 and MK886)[90][91][92][93], midazolam[94][95], ginsenoside Rg3[96], ginsenoside-Rd[97][98], aripiprazole[99] and coomassie brilliant blue G-250 (BBG)[100]. Our laboratory identified several additional inhibitors of the TRPM7 channel such as quinine, CyPPA, dequalinium, SKA31, and UCL1684[101].

In contrast to later molecules, Waixenicin A, FTY720 and NS8593 were able to suppress TRPM7 currents when applied at low µM concentrations. Subsequently, these reagents were often used to probe the cellular role of TRPM7[102][103]. Waixenicin A is a natural terpenoid isolated from the soft coral Sarcothelia edmondsoni, and inactivates the TRPM7 channel in an Mg2+ dependent manner with an IC50 of 7 µM[37]. FTY720 (synthetic homolog of sphingosine) inhibited TRPM7 currents with an IC50 0.7 µM[104]. Our laboratory has shown that the small synthetic molecule N-[(1R)-1,2,3,4-tetrahydronaphthalen-1-yl]-1H-benzimidazol-2-amine (NS8593, Figure 2) suppresses TRPM7 currents in an Mg2+-dependent fashion with an IC50 of 1.6 µM[101]. 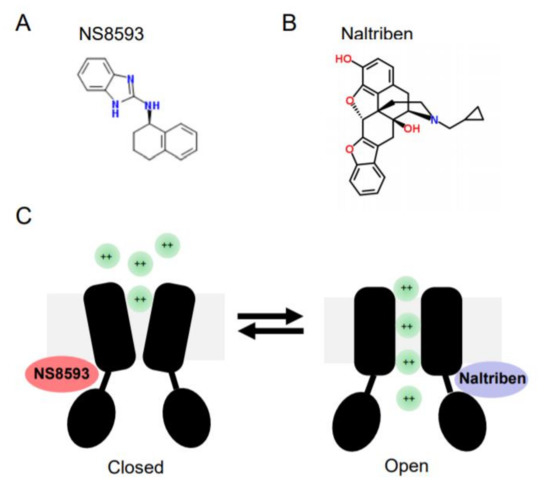 In a follow-up screen, our group has discovered the first small drug-like molecules functioning as TRPM7 channel agonists[105]. In particular, we found that twenty drug-like compounds with different structural backbones can stimulate TRPM7 currents[105][106]. Among them, naltriben (Figure 2) and mibefradil were characterized more in detail, and nowadays both compounds are frequently used by other TRPM7 investigators, often in combination with the TRPM7 inhibitors mentioned before[102][103]. Of note, naltriben is able to activate the TRPM7 channel both in the presence of physiological concentrations of cytosolic Mg2+ and after PIP2 depletion with an EC50 of 20 µM[105]. Hence, we defined naltriben as a positive gating modulator of the TRPM7 channel[105]. Unlike naltriben, mibefradil-mediated activation of TRPM7 was highly dependent on intracellular Mg2+ levels[106]. Accordingly, we suggested that at least two distinct types of TRPM7 activators exist, referred to as type 1 (acting independently of Mg2+) and type 2 (Mg2+-dependent agonists)[106].

Overall, the pharmacological toolkit suitable for the assessment of the TRPM7 kinase remains underdeveloped, and currently, it is limited to only one compound, TG100-115. TG100-115 was initially introduced as an inhibitor of phosphoinositide 3-kinases[107]. However, Davis et al. [108] found that TG100-115 is also able to inactivate the purified kinase domain of TRPM6 with an IC50 of 8 nM[108] [108]. We also found that TG100-115 efficiently inactivates TRPM6 kinase in living cells[21]. Besides, Song et al.[109] examined the effects of TG100-115 on the TRPM7 kinase and reported that this reagent inhibits the TRPM7 kinase with an IC50 of 2 µM. Finally, it is worth mentioning that in our hands, neither NS8593 nor naltriben directly affected the kinase activity of TRPM7 (unpublished observations). However, we cannot rigorously exclude that in specific experimental settings, these compounds may modulate the kinase moiety indirectly, for instance, subsequent to altered uptake of divalent cations by the channel domain of TRPM7.