Heightened levels of carbon dioxide (CO2) and other greenhouse gases (GHGs) have prompted research into techniques for their capture and separation, including membrane separation, chemical looping, and cryogenic distillation. Ionic liquids, due to their negligible vapour pressure, thermal stability, and broad electrochemical stability have expanded their application in gas separations.

Flue gas emissions from the chemical industries have severe impacts on the whole environment and the atmosphere and are considered one of the primary causes of global warming phenomena [1][2][3][4][5][6][7][8]. Consequently, the separation and the capture of these unwanted gases has become necessary. The unwanted gaseous emissions that result from burning fuel and chemicals in chemical engineering power plants include carbon dioxide (CO2), methane (CH4), nitrogen oxides (NOx), sulphur oxides (SOx), and hydrogen sulphide (H2S). Each power plant has the responsibility of mitigating and reducing the amount of these gases to limit their negative impact on the environment. 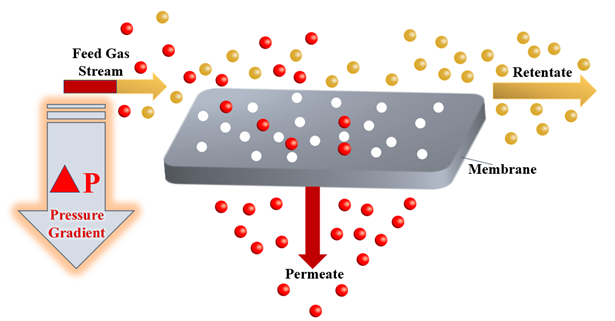 As a result of global warming and the harmful effects of greenhouse gases on the whole environment, the gas separation process plays a fundamental role in the chemical engineering industry as a result of its broad range of applications ranging from carbon dioxide gas separation from natural gas, Recovery of hydrogen from waste gas streams, production of nitrogen and oxygen-enriched gases. During the past decades, a large number of different techniques for the separation of gas have been developed and these methods include membrane separation, chemical looping, and cryogenic distillation. By focusing on the membrane gas separation, many studies and publications were made by several researchers from all over the globe to study the membrane gas separation processes synthesis, implementations, applications, limitations, and development. Figures S7 and S8 give an insight into the interest of researchers about the gas separation processes from the year 2004 to the year 2020.

Ionic liquids (ILs) are organic molten salts that have a melting point below 100 Co. Room temperature ionic liquid (RTIL) are ionic liquids that have a melting point less than room temperature (Tmelting < 373 K) [26]. These ionic liquids exhibit many exciting properties that distinguish them from other liquids, including negligible vapour pressures, high thermal stability [27][28][29], inflammability, a liquid range of up to at least 300 Co [30], high solubility for a wide range of inorganic and organic compounds [31]. Moreover, their physicochemical properties can be tailored to satisfy specific chemical tasks by the appropriate selection of anion, cation, and substituents on the cationic constituent. Table 4 below shows the two- and three-dimensional structures of the most used ionic liquids mentioned in this study.

Table 1. Two and three dimensional structures of the most used ionic liquids mentioned in this study.

It is obvious that from Figure S9 that ionic liquids are capturing the special attention of researchers from various countries across the globe. China is ranked the highest country (12%) by searches and interest in ionic liquids, followed by South Korea (9%). Consequently, extensive chemical engineering applications of these innovative fluids have taken place by the end of the last century [32][33][34][35][36][37]. Ionic liquids are made by associating large organic cations with a numerous variety of anions. The most common ionic liquid cations include pyridinium, imidazolium, pyrrolidinium, and theirmono or poly-alkyl derivatives, as well as tetraalkylammonium or phosphonium and trialkylsulfonium. The classical ionic liquids anions include, for the low melting ionic liquids: trifluoromethylsulfate (TfO), bis(trifluoromethylsulfonyl)imide (NTf2), tetra-fluoroborate (BF4) or hexafluorophosphate (PF6) and dicyanamide (N(CN)2). In low stability ionic liquids or ionic liquids that are not liquid at room temperature, the following simple anions are included: iodide, nitrate, bromide, chloride, perchlorate, formate or acetate [38]. Ionic liquids can be produced by other anions, as shown by the selective alkyl-methylimidazolium IL list presented in Table 5 below.

Aside from their different properties, there are severe limitations that face the usage of ionic liquids [39][40]. The main limitations are the high synthesis price and the high recycling energy requirement. These two limitations could act as a burden on the economic and financial sides of the processes. The use of ionic liquid membrane (ILM) technology can overcome these two drawbacks. The ILM consists of the feed and permeates phases that are separated by a membrane containing IL that allows simultaneous extraction and stripping at each side of ILM. The IL for an ILM can be stabilized by either quasi-solidification to endow material with good mechanical strength or impregnating it inside the pores of the support membrane. The ILM techniques require a fewer amount of IL as a carrier and do not require additional steps for IL recycling. Consequently, ILMs have many advantages, such as the low energy requirements, the ease of fabrication due to the flexible and compact devices, low operating costs, capital and several more merits

Furthermore, due to the special and the outstanding properties of IL, e.g., high viscosity, and negligible vapour pressure, ILMs are considered more stable compared to the traditional supported liquid membranes (SLMs) based on organic solvents. Therefore, ILMs show promising application potential. In the last decade, researchers have reported the use of ILMs in several applications and fields, including the separation of various mixtures, electrochemical devices, and catalytic reactions.

The research progress of gas separation, especially CO2 separation, has been addressed in depth. Martins, et al. [41] conducted a CO2 removal process by using a membrane contactor that is combined with a biocompatible ionic liquid (IL), cholinium lysinate, that has a high absorption capacity (5.9 mol CO2/kg IL). The rate of CO2 removal and IL solution regeneration was examined in their study by changing the feed gas composition, conditions of the ionic liquid flow rate, and the relative humidity. The results obtained from their study have shown that the proposed system is capable of removing CO2 from anaesthetic gas circuits [41]. Shamair, et al. [42] have successfully investigated the performance of a recently synthesized RTIL in SILM, theoretically, and experimentally. In their study, benzimidazolium-1-acetate was used to synthesize SILM over a polyimide support. The synthesized SILM was tested for different gas mixtures (CO2/CH4 and CO2/N2). The prepared SILM results have shown that there is a high selectivity of 37.92 and 40.29 for CO2/CH4 and CO2/N2, respectively. These results strengthen the DFT calculation and indicate that there are up-and-coming applications for SILM in gas separation [42]. Sohaib, et al. [43] have mentioned in their research study that coupled absorption/desorption in combination with ILs, can be considered very useful for continuous post-combustion carbon capture [43]. Zia-ul-Mustafa, et al. [44] focused their research on the effect of imidazolium-based ionic liquids on the PES membrane for CO2/CH4 separation. The polyethersulfone (PES) based gas separation ionic liquid polymeric membranes (ILPMs) were synthesized in their study. Ionic liquids 1-ethyl-3-methylimidazolium tetrafluoroborate [EMIM][BF4] and 1-ethyl-3-methylimidazolium dicyanamide [EMIM][DCA] were added to the doping solution at ten weight % and flat sheet dense membranes were cast by the method of dry phase inversion. The CO2 gas permeability of the synthesized ILPMs was successfully increased by blending the ionic liquids into the polymer matrix as a result of the high affinity and solubility of CO2 in [EMIM][BF4] and [EMIM][DCA] ionic liquids. Membrane PES+IL1 (10%) has shown an approximation of 23.5 folds increase in CO2 gas permeability in comparison to the pure polyethersulfone membrane. Hence, they mentioned that the ILPMs have a remarkable potential for the separation of CO2 from natural gas [44]. Nabais, et al. [45] used poly(ionic liquid)-based engineered mixed matrix membranes for the separation of CO2/H2. The mixed matrix membranes (MMMs) were synthesized by combining IL, a pyrrolidinium-based PIL, and three highly CO2-selective metal-organic frameworks (MOFs). The different MOFs ZIF-8, (MIL-53(Al), and Cu3 (BTC) 2 were used as fillers, that aims to maximize the performance of the membranes towards the purification of syngas. Ideal selectivity and permeability of CO2 were achieved as a result of their usage of different MOFs and loadings (0, 10, 20, and 30 wt %). The authors also mentioned that this has caused mechanical and thermal stabilities of the membranes and has in term increased their performance [45].

Ionic liquids are very versatile and their anions and cations can be adapted easily to the role that they have to play. Their most valuable and distinguishable physicochemical properties include the following: low melting point (m.p. < 100 Co), high thermal stability, insignificant vapour pressure, a low surface tension  [46], high electrical conductivity, a wide electrochemical window [47][48][49], and an adjustable solvent viscosity and/or hydrophobicity and/ or polarity associated with high or low water miscibility [50]. In the separation techniques, the most crucial parameters are the ionic liquid melting point, viscosity, thermal stability, vapour pressure and solvent properties [51].

Ionic Liquids at room temperature are viscous liquids. By looking at Table 5, at 25 °C the lowest viscosities observed with the methylimidazolium salts are 15 cp for [EMIM][C(CN)3], 16 cp for [EMIM] [N(CN)2], and 20 cP for [allylmim][N(CN)2].[54]. The values of these viscosities are similar to the viscosities at 25 °C of viscous organic solvents such as ethylene glycol (16 cP) [55], dimethyl phthalate (14 cP) [56], or ethanolamine (21 cP) [57]. An increase in temperature dramatically reduces the viscosity, as shown by the 50 °C values listed in Table 5. There is an extensive database in the literature that includes the viscosities of ionic liquids [58].

The significant vapour pressure of the ILS is quite challenging to be measured. At high temperatures, a decomposition of the liquids might occur, and at very low temperatures the vapour pressure becomes too low to be measured by typical conventional methods. Several studies focus on finding the vapour pressure of ionic liquids. Ahrenberg, et al. [59] and his research team have focused on determining the vapor pressure of ionic liquids at low temperatures using AC-chip-calorimetry. A highly sensitive method for mass loss determination at temperatures starting from 350 K was successfully developed in their study. They found the vapour pressure from the measured rates of mass loss using the Langmuir equation. The method that they have used has successfully determined the vapour pressure and the vaporization enthalpy of an archetypical ionic liquid 1-ethyl-3-methylimidazolium bis (trifluoromethylsulfonyl) imide ([EMIM][NTf2]) [59]. Maton, et al. [60] have mentioned in their research that the thermal stability of an IL depends on the specific combination of the cation-anion [61]. Also, Xue, et al. [62] have examined the thermal stability of ILs under vacuum by thermogravimetric analysis (TGA). The TGA analysis of their study has shown that many ionic liquids start to decompose thermally at 700 K [61].