Petroleum hydrocarbons, heavy metals and agricultural pesticides have mutagenic, carcinogenic, immunotoxic and teratogenic effects and cause drastic changes in soil physicochemical and microbiological characteristics, thereby representing a serious danger to health and environment. Therefore, soil pollution urgently requires the application of a series of physicochemical and biological techniques and treatments to minimize the extent of damage. Among them, bioremediation has been shown to be an alternative that can offer an economically viable way to restore polluted areas.

Bioremediation is the process by which living beings such as plants, algae and microorganisms are used to remediate, reduce or remove contamination from the environment[1]. Hydrocarbons are broken down by microorganisms and plants into greener products, or are converted by other microbial species into water, CO2 and other inorganic compounds[2]. Since effective bioremediation requires the action of microbial enzymes to transform contaminants into non-hazardous compounds, operating conditions must be optimized to allow microbial cells to quickly biodegrade them [3]. This bioprocess has appeared among the most promising emerging treatments to remove oil and derivatives since its first use in 1989 to remediate the environmental disaster of Exxon Valdez [4].

Hydrocarbon bioremediation, which involves heterogeneous and complex processes, is highly efficient, but still takes a few weeks or even months to complete. The use of microorganisms is influenced by some factors including the type of pollutant, the environmental conditions, as well as the presence of nitrogen and phosphorus sources [5]. Temperature has a strong impact on oil hydrocarbon degradation, due to its influence on petroleum physical state and chemical composition, microbial metabolism, and composition of microbial consortium [6]. Optimal temperature of hydrocarbon biodegradation is influenced by climate, site location and microbial species [7]. Even though hydrocarbon degradation occurs over a wide temperature range, usually the higher the temperature, the faster the bioprocess [8]. Other important factors that directly influence bioremediation are the medium pH, redox potential, moisture content, availability of oxygen and other compounds, soil/water composition and pollutant solubility [9]. It is important to note that this technology has its own limitations. Chlorinated hydrocarbons, for example, or other aromatics are almost recalcitrant to biodegradation or are biodegraded very slowly [10].

A case study conducted on pentachlorophenol in New Mexico identified the following main factors influencing the outcome of bioremediation of organic compound-polluted soil: (1) pesticide bioavailability, (2) rate of microbial uptake, (3) rate of enzymatic degradation, and (4) rate of cell growth using the pesticide as carbon and energy source [11]. The main soil conditions, including pH, and the microbial consortium formed by Arthrobacter sp. and Flavobacterium sp., were critical in determining the success of bioremediation. 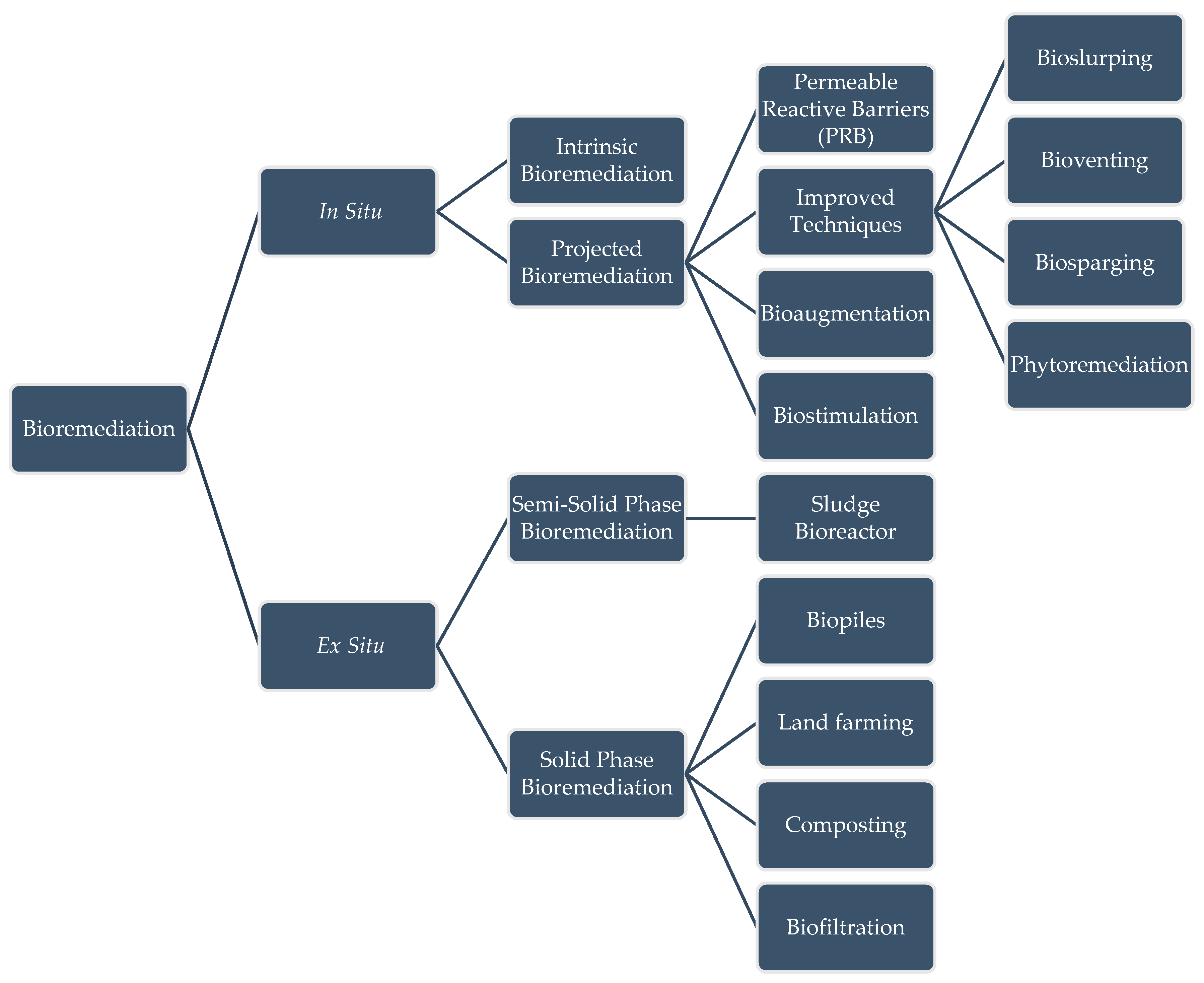 In the context of bioremediation, the term “in situ” means that bioremediation takes place at the contaminated site, without the transfer of polluted materials [10] In-situ techniques can be classified as intrinsic or projected bioremediation [12], the latter being composed of a series of techniques.

Alternatively called passive bioremediation or natural attenuation, intrinsic bioremediation is a natural degradation process that depends only on the metabolism of native microorganisms to destroy dangerous contaminants, using no artificial stage to enhance biodegradation activity [13]. The absence of external factors makes this process the cheapest in-situ bioremediation technique. However, continuous monitoring is needed for bioremediation to be continuous and sustainable.

The main requirements to be met to make the application of intrinsic bioremediation effective are the following [13].:

Considering that native microorganisms are highly effective in degrading pollutants because they are already adapted to the site conditions, and that there is a microbe/hydrocarbon relationship established in the course of evolution, the hydrocarbon-degrading ability is common among microbial consortia [3]. Before applying intrinsic bioremediation, however, a risk assessment should be performed to ensure that the time required to complete bioremediation is shorter than that required by the contaminant to reach the closest point of human and animal exposure.

Permeable Reactive Barriers (PRBs) are an in-situ technology applied to remediate groundwater contaminated by many types of pollutants such as chlorinated hydrocarbons and heavy metals [14] (Figure 2). A permanent or semipermanent reactive barrier composed mainly of iron is immersed in the contaminated groundwater stream [15]. When contaminated water naturally flows through the barrier, the contaminants are trapped and react, releasing purified water [16]. Ideally, PRBs are sufficiently reactive to capture pollutants, permeable to allow water to flow, passive with little energy consumption and cost-effective [17]. The efficiency of such a technology relies on the type of medium, which in turn depends on the type of pollutant, environment, health effects, biogeochemistry, hydrogeology, system steadiness and cost [18]. In the past few years, PRBs have been coupled with other techniques to treat different classes of contaminants [19]. 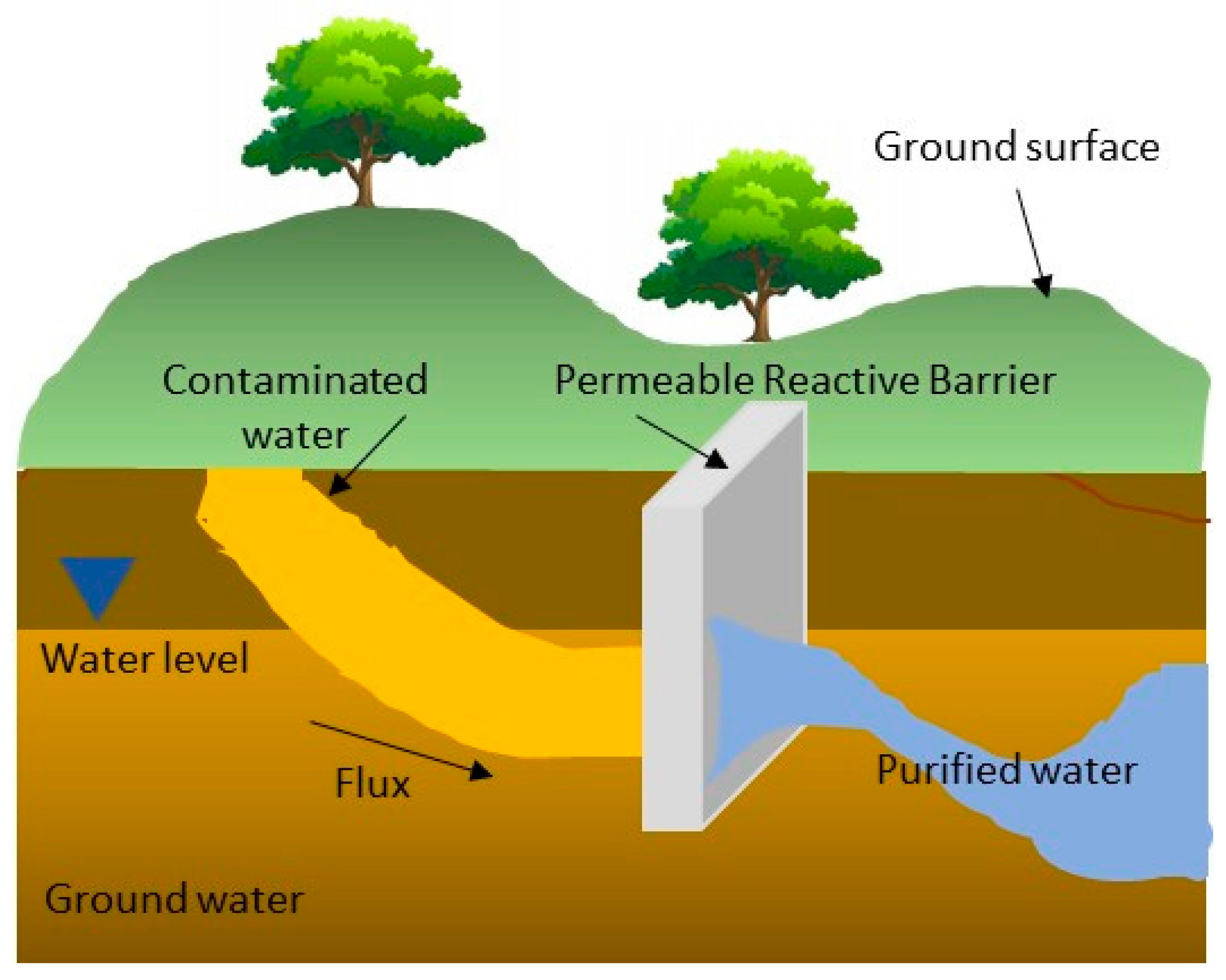 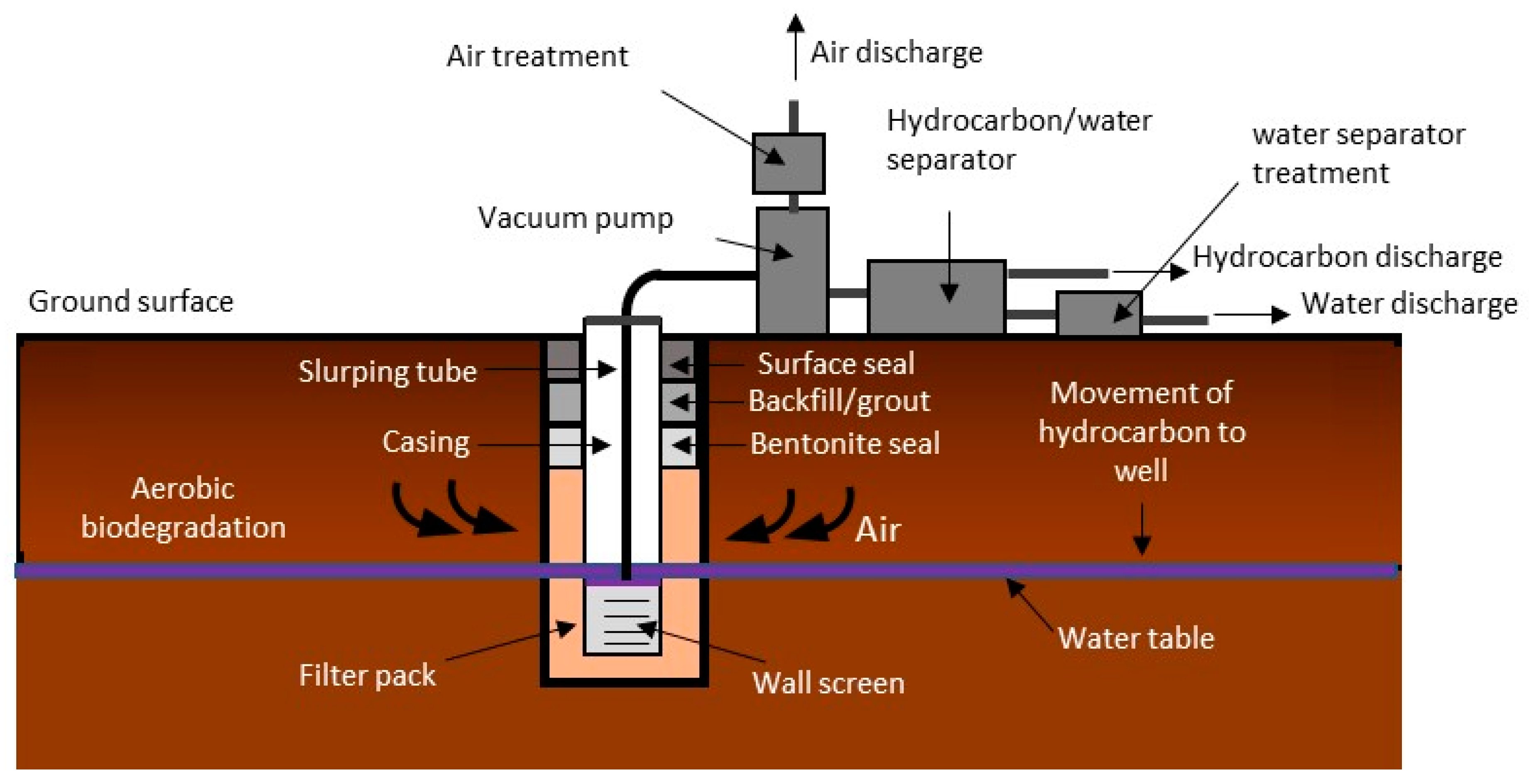 Figure 3. Scheme of operation of bioslurping (adapted from [21]).

Bioventing involves controlled stimulation of the air flow, providing oxygen to increase microbial activity and, consequently, enhance bioremediation [23] (Figure 4). Usually, nutrients and humidity are added to achieve transformation into pollutants that are more harmless to the environment and to improve remediation. This technique has been used successfully in the remediation of soils polluted by oil products [24]. 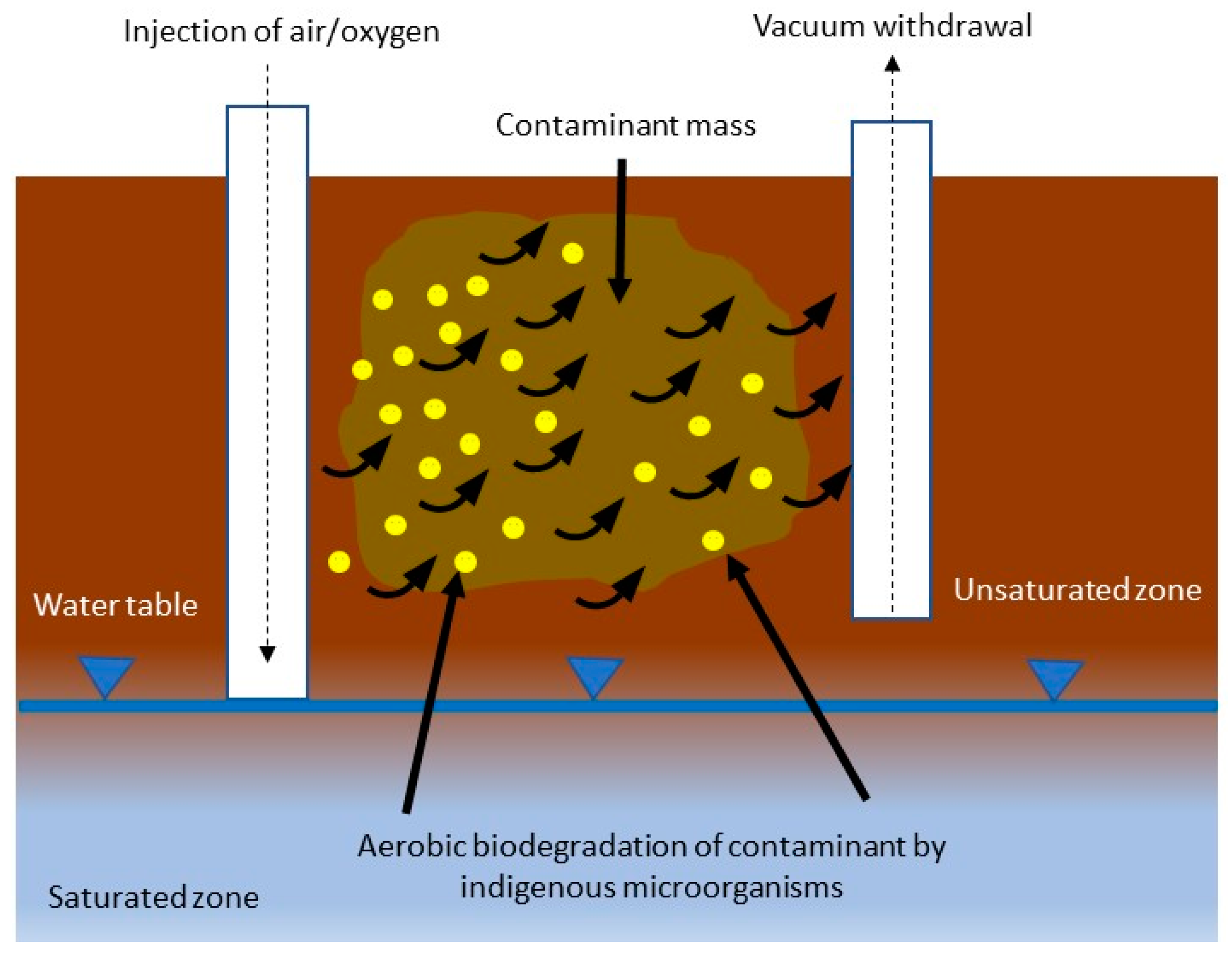 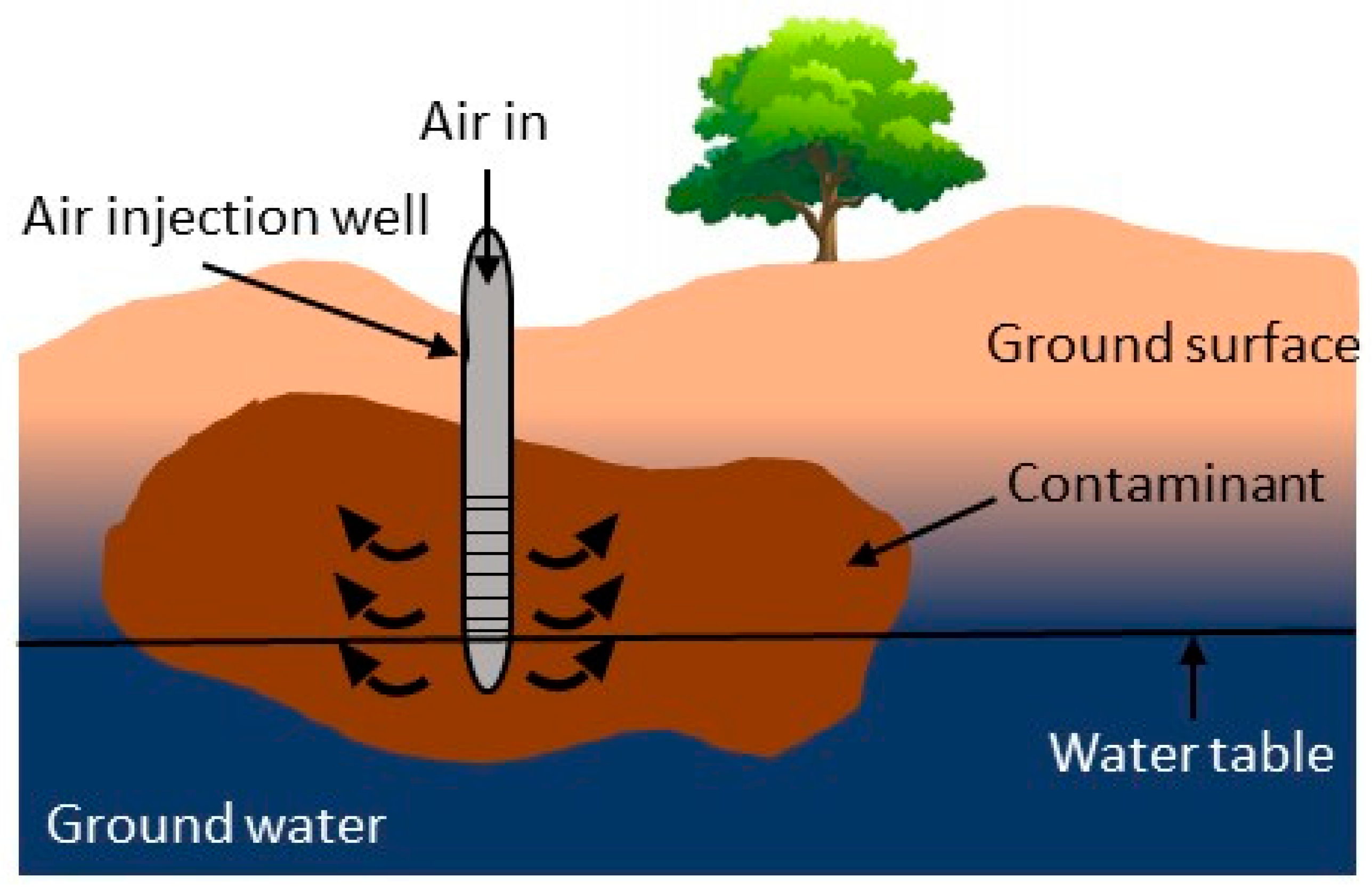 Phytoremediation refers to the use of plants in polluted sites to promote biological, biochemical, physical, microbiological and chemical interactions to attenuate the toxicity of contaminants [22]. Depending on the type of pollutant, it occurs through different mechanisms, namely biodegradation, vaporization, filtration, among others. Elemental contaminants like heavy metals or radioactive elements are mainly extracted, transformed and sequestered, while organic contaminants are eliminated mainly through rhizodegradation, biodegradation, vaporization or stabilization [26].

Within phytoremediation, there are many different ways that plants interact with contaminants [27] (Figure 6): 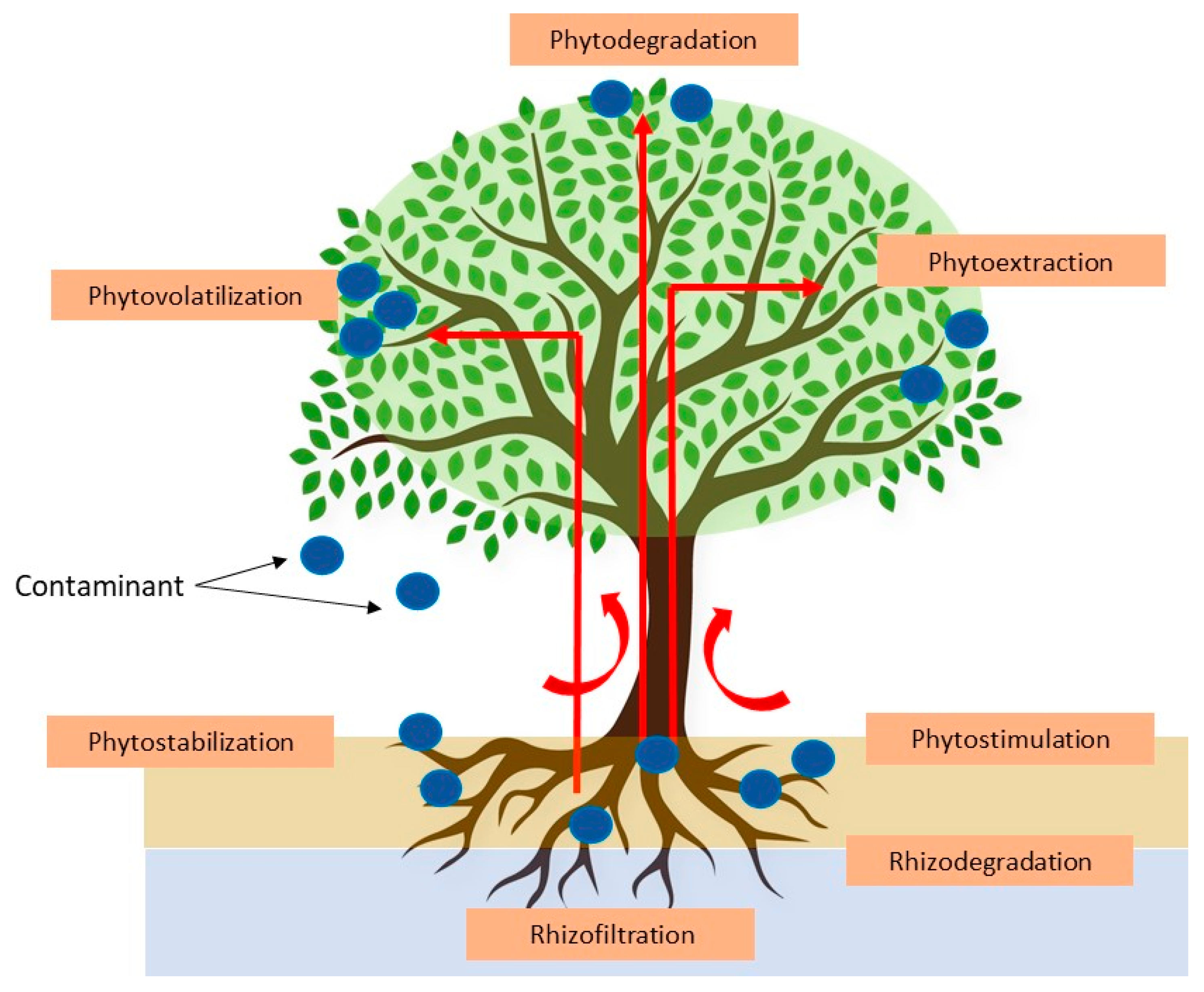 In this case, the polluted material is removed and degraded in special facilities outside the incident site [29]. After excavation, the polluted soil is transported elsewhere for treatment. The selection of an ex-situ bioremediation technique is usually made on the basis of the following aspects: operating costs, extent and depth of contamination, type of contaminant, location and geological features of the contaminated site [20].

The term ‘bioreactor’ refers to any equipment or manufactured facility that supports a bioactive system. Sludge bioreactors are used to treat hydrocarbon pollutants safely and easily. Contaminants are kept in a containment container where, using various types of devices to mix the sludge, a mixture is obtained consisting in a three-phase solid, liquid, and gaseous system. The biofilm formed stimulates the biodegradation of pollutants and increases the biomass level [30].

Bioremediation through biopiles consists in the piling of contaminated soil and subsequent aeration to promote biodegradation mainly by improving microbial activity. The elements of this technology are watering, aeration, and leaching. Its use is increasingly taken into consideration thanks to its construction characteristics and the favorable cost-benefit ratio that allow efficient bioremediation, provided that adequate control of nutrients, temperature and aeration is ensured [31].

Landfarming (Figure 7) is a soil bioremediation technique that involves mixing the contaminated soil with hydrocarbons to improve soil biological and physical factors as well as chemical processes for biodegradation [32][33]. It is among the most basic bioremediation technologies because of its low cost and low footprint. Landfarming can be classified as ex-situ or in-situ technology depending on where the treatment takes place. 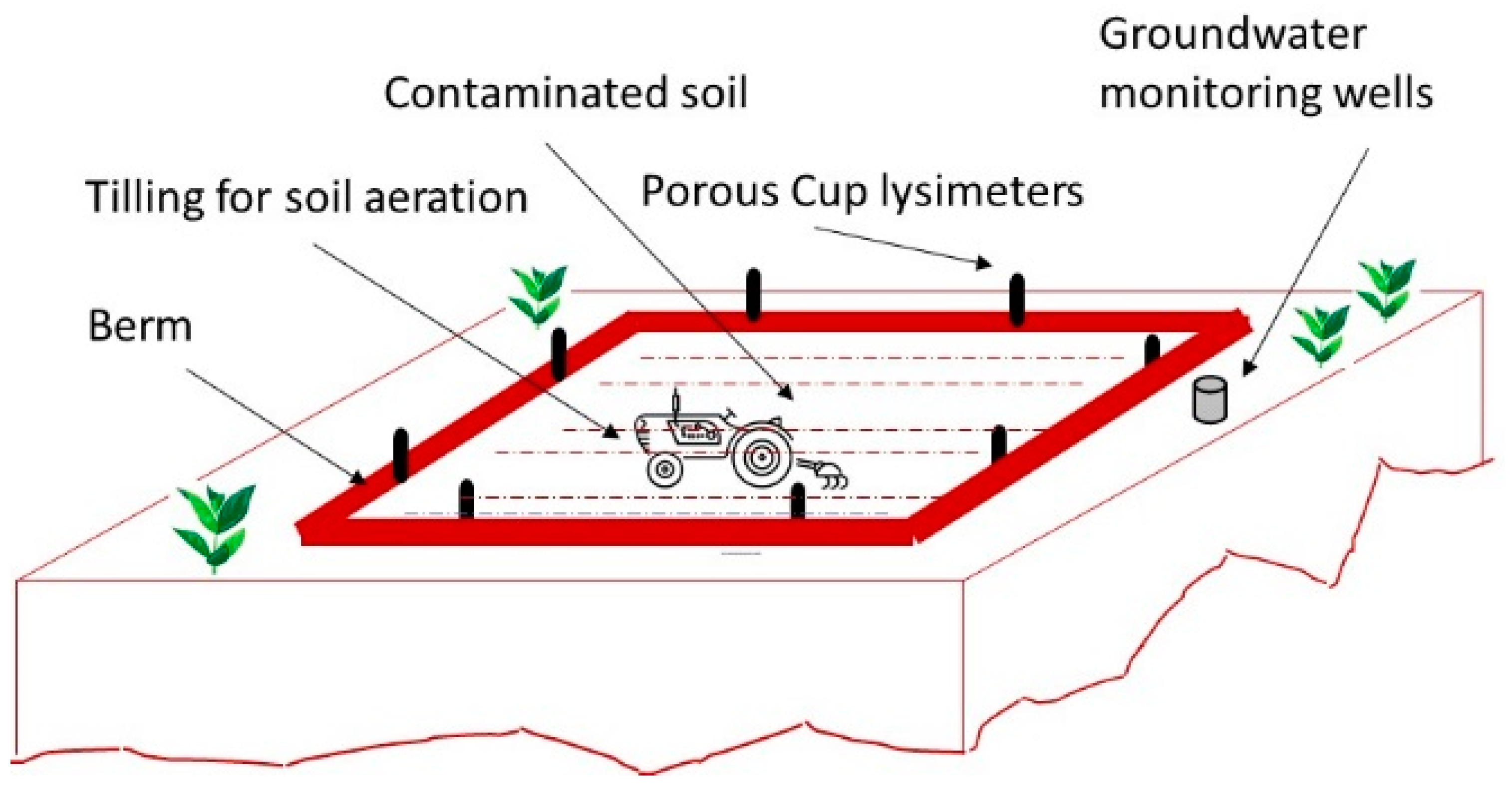 Composting is an ex-situ aerobic process by which organic waste is decomposed by thermophilic biological agents to obtain a humic amendment known as compost [34], which is used as soil fertilizer [35].

Many methods are being developed to improve existing technologies, as well as to find new alternatives to treat polluted soil. Following this trend, the use of surfactants and biosurfactants may be an efficient option to assist soil treatment. Surfactants are amphiphilic compounds consisting of a hydrophilic portion (head) with high chemical affinity for water and a hydrophobic (tail) strongly repulsed by it, which are capable of reducing the surface tension of the liquids in which they are dissolved [36][37][38].

Surfactant-enhanced soil washing and removal of lyophilic contaminants can occur in two different ways: the first, which consists of displacement, occurs below CMC, while the second, called solubilization, at higher concentrations.

Synthetic surfactants include ionic and nonionic surfactants. Both have been used successfully to remove different types of toxic organic compounds as well as heavy metals contaminating the soil [39].

Despite the application potential of synthetic surfactants, the environmental impact deriving from their difficult degradation has led to the development of their biological counterpart, namely the so-called biosurfactants [40][41], which have a comparable efficiency and are among the most studied bioproducts nowadays [42][43].

The bioremediation of contaminated soils is considered an environmentally friendly, versatile, and cheap technology, since in addition to restoring the damaged ecosystem at low cost, it reduces the risk to health and preserves biodiversity. Furthermore, well-designed bioremediation projects can create new markets and facilitate the management of contaminated soils, promoting the integration of sustainable socio-economic activities. The most used in-situ bioremediation techniques are bioaugmentation and biostimulation, while bioreactors are the most used ex-situ systems. Although ex-situ bioremediation processes allow many contaminants to be treated in a controlled way, they are generally costlier than the in-situ ones because of the additional excavation and transport expenses. On the other hand, even if the processes belonging to the latter category have the economic advantage of not including excavation, the cost of installing the equipment on site, associated with the impossibility of efficaciously seeing and controlling the contaminated site subsoil, can make some of them unviable. Consequently, the cost of remediation cannot be the only factor to consider in choosing the most suitable treatment to be applied to a given contaminated site. On the other hand, the lack of sufficient knowledge about the effect of various environmental factors on the rate and extent of biodegradation creates a source of uncertainty. It is important to point out that many field tests are not properly designed, controlled, or analyzed, generating uncertainty in the selection of response options. Therefore, the applicability of a soil bioremediation technique will be the result of the combination of a number of factors such as the location and type of contamination, objectives, expected efficiency, cost-effectiveness and duration of the remediation, and its public acceptability. The combined use of multiple techniques should also be considered, which makes it possible to increase the effectiveness of remediation and to minimize the individual disadvantages of each of them. Studies and planning, which help select the most suitable technique, must be conducted before it is implemented on a large scale. Moreover, a wide variety of microorganisms and metabolites with decontamination skills are still largely unexplored, and a better understanding of their natural role in the environment can improve their use. Finally, understanding the diversity of the microbial community in environments contaminated by oil and derivates is essential to gain a better view of potential oil degraders and to develop appropriate bioremediation strategies, thus preserving the long-term sustainability of terrestrial ecosystems.