The immune system not only functions to keep foreign pathogens away from the host, it also has a role in suppressing cancer[1]. The precursor of cancerous cells is initially a normal cell that becomes malignant due to multiple mutations within its genome. The mutated genes, when expressed, will result in the production of non-self-antigens. Theoretically, those mutated tumor neo antigens will be recognized and eliminated by our immune system because there has been no tolerance toward those tumor neo antigens. However, cancer cells could develop mechanisms to trick that immune system.

Generally, there are two main mechanisms for cancer cell recognition by immune cells. The first mechanism is self-presentation of tumor antigen through MHC or human leukocyte antigen (HLA) Class I. The second mechanism is tumor antigen presentation through professional antigen presenting cells (APCs) via MHC or HLA Class II [3]. Both methods of tumor antigen presentation are essential in immune surveillance and recognition [3][4]. Cancer cells generally harbor multiple mutations within their genome. Some parts of the mutated genes may express foreign antigens [5]. These mutated genes are not previously known by the host immune system, therefore, they should be able to be recognized by immune cells [5][6].

Furthermore, tumor cells can also downregulate MHC Class I molecule by suppressing various MHC Class I transcriptor activators. Loss of Interferon regulatory factor 2 (IRF2) and NOD-like receptor (NLR) family and caspase recruitment (CARD) domain containing 5 (NLRC5) expression have been shown to be correlated with lower expression of MHC Class I and higher expression of immune exhaustion maker [8][9]. These transcriptor activators in cancer cells were suppressed by various means including methylation, copy number loss, or somatic mutation [8][9]. These are some of the known and most common mechanisms of cancers to fail the process of immune recognition via MHC Class I.

Figure 1. Mechanisms of tumor escape immune recognition. (a) Through downregulation of MHC Class I in tumor cells, rendering tumor cells unrecognized. (b) Through engulfment of tumor debris and further presentation through MHC Class II and APC cells (chronic process of that event leads to chronic inflammation resulting in sensitization and differentiation of CD4+ T cells toward immune suppressive CD4+ T regulatory cells phenotype).

Tumor cell recognition through professional antigen presenting cells and the MHC Class II molecule is also an important process in cancer immune surveillance and recognition [12][13]. Though MHC Class II is only expressed in professional antigen presenting cells, its role has been shown to be as critical as MHC Class I in cancer immunotherapy [4]. Tumor cells will continuously proliferate until a point in which the supply of nutrients and oxygen through neo-vasculature becomes inadequate. At that point, the tumor becomes hypoxic and later dies. This process of cell death is commonly immunogenic in nature. This immunogenic tumor death will result in the release of various damage‐associated molecular patterns (DAMPs) such as adenosine triphosphate (ATP), high-mobility group protein B1 (HMGB1), and heat-shock proteins that will recruit various antigen presenting cells [14][15].

Even though the administration of immune checkpoint inhibitors described in the previous section have successfully reversed the immunosuppressive mechanism by cancer cells in some cases, however, a substantial number of cases still did not show tumor regression or, at most, only a temporary tumor regression. This persistent immune tolerance is due to the proliferation of dysfunctional to exhaustive T cells within the tumor microenvironment [16][17][18]. An in-depth study analyzing the transcriptome of every single immune infiltrating lymphocytes in melanoma samples revealed that majority of CD8+ T cells were indeed lacking a complete cytotoxic gene expression, thus making them dysfunctional [16]. Furthermore, those dysfunctional CD8+ T cells were clonal and very proliferative within the tumor microenvironment [16] (Figure 2). 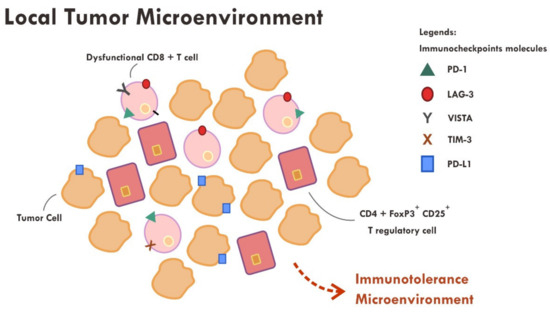 There are various forms of immunotherapy available as cancer treatment. The oldest form of immunotherapy is in the form of pro-inflammatory cytokine administration such as interferon. Later, immune checkpoint inhibitors were developed based on monoclonal antibody. These immune checkpoint inhibitors are the most commonly utilized immunotherapy today. The other forms of immunotherapy are adoptive cell transfer and oncolytic virus vaccine [23][24]. Adoptive cell transfer is based on isolation or engineering of immune cells such as cytotoxic T cells or NK cells that are able to recognize tumor neo antigens [23][24]. Then, these adoptive cells are expanded ex vivo and then infused into the patients [23]. It is expected that those infused killer cells would recognize and attack the cancer cells. Oncolytic virus vaccine is based on engineered virus with its virulence gene deleted [25]. The administration of oncolytic virus into the tumor will trigger tumor infection, which later leads to cell lysis with positive inflammatory response [25].

The effectiveness of all modes of immunotherapy is very dependent on the intrinsic and dynamic tumor microenvironment of each patient. Any immunotherapy will only be effective if strong response of tumor recognition and tumor attack are elicited. In cytokine based immunotherapy, the interferon increases dendritic cell maturation, favors T helper 1 differentiation, increases cytotoxic function of Natural Killer (NK) cells, and increases tumor MHC class 1 expression [26][27]. However, interferon has also been shown to induce upregulation of immune checkpoints such as PD-L1 [28][29]. Therefore, immune tumor attack becomes suboptimal. Combining interferon and immune checkpoint inhibitor has a sound rationale. Phase I and II trials have shown the safety and initial efficacy of these combinations [30][31] Nevertheless, complete response was only observed in a small subset of patients [30][31]. This observation underscores that some other mechanisms were in place that rendered either tumor recognition or tumor attack suboptimal.

Various immune checkpoint inhibitors have been approved and used in clinic. A phase III trial comparing chemotherapy and a single agent pembrolizumab, an anti PD-1, has shown a remarkable survival benefit of pembrolizumab over chemotherapy in metastatic non-small cell lung cancer [32]. Furthermore, an analysis of a KEYNOTE-001 study showed that 16% of patients receiving pembrolizumab for metastatic melanoma had a durable complete response [33][32]. These significant findings were clinically very meaningful, but unfortunately was only observed in small subsets of patients. Immune checkpoint inhibitors generally act to re-invigorate the tumor immune attack, as discussed in the previous section. In a condition where there is a lack of tumor immune recognition per se, then immune checkpoint inhibitors are unlikely to be clinically beneficial.

The hurdles of immunotherapy have to be viewed in a more comprehensive perspective. The hurdles are due to the establishment of inherent subversion mechanisms of immune recognition and immune attack of tumor cells. Immunotherapy alone in most cases would not be able to counteract all of these mechanisms. One way to counteract these mechanisms is by combination therapy. Various commonly employed anti-cancer treatments are able to tackle some of these mechanisms. When combined with immunotherapy, multiple mechanisms could be reversed simultaneously and result in better tumor control. Next, in the following section, we will discuss various commonly employed anti-cancer treatment and its relationship with tumor immunity.