During the past two decades there has been a major shift in the choice of agents to treat multiple myeloma, whether newly diagnosed or in the relapsed/refractory stage. The introduction of new drug classes, such as proteasome inhibitors, immunomodulators, and anti-CD38 and anti- SLAMF7 monoclonal antibodies, coupled with autologous stem cell transplantation, has approximately doubled the disease’s five-year survival rate. However, this positive news is tempered by the realization that these measures are not curative and patients eventually relapse and/or become resistant to the drug’s effects. Thus, there is a need to discover newer myeloma- driving molecular markers and develop innovative drugs designed to precisely regulate the actions of such putative targets. B cell maturation antigen (BCMA), which is found almost exclusively on the surfaces of malignant plasma cells to the exclusion of other cell types, including their normal counterparts, has emerged as a specific target of interest in this regard. Immunotherapeutic agents have been at the forefront of research designed to block BCMA activity. These agents encompass monoclonal antibodies, such as the drug conjugate belantamab mafodotin; bispecific T-cell engager strategies exemplified by AMG 420; and chimeric antigen receptor (CAR) T-cell therapeutics that include idecabtagene vicleucel (bb2121) and JNJ-68284528.

Multiple myeloma (MM) is a hematological cancer characterized by clonal plasma cell proliferation in the bone marrow along with high levels of monoclonal immunoglobulins in the blood and/or urine. Ranking behind non-Hodgkin’s lymphoma, MM is the second most common blood cancer and the 14th most prevalent cancer overall. It is estimated that in 2020 a total of 32,270 (54.3% male) new cases of the disease will be diagnosed and be responsible for 12,830 deaths in the U.S. [1]. Active MM, which is accompanied by a tetrad of symptoms, generally abbreviated CRAB—hypercalcemia, renal insufficiency, anemia, and bone lesions—often is preceded by an asymptomatic phase known as monoclonal gammopathy of undetermined significance (MGUS). Progression from MGUS to MM, which carries a risk of about 1% per year [2], may also include another asymptomatic state known as smoldering myeloma [3]. The most recent pertinent guidelines for the diagnosis and treatment of MM have been issued by the National Comprehensive Cancer Network (NCCN) [4].

The therapy of MM has seen remarkable progress over the past half century. Beginning in the mid-1960s and continuing for more than three decades, alkylating agents, principally melphalan and cyclophosphamide, often accompanied by corticosteroids, were considered standard therapy for the disease. Starting in the 1990s, treatment protocols for the disease were augmented by autologous stem cell transplantation (ASCT). This established paradigm shifted dramatically starting in the late 1990s with the discovery of thalidomide′s immunomodulatory actions that conferred remarkable anti-myeloma properties on this formerly ignominious agent. This was followed by the mechanistically related lenalidomide in 2005 and later (2013) pomalidomide. Furthermore, the discovery of the anti-myeloma activity of the proteasome inhibitor bortezomib in 2003, subsequently followed by carfilzomib and ixazomib, provided substantive additions to the armamentarium available to fight the disease. In 2015, in another remarkable turn of events, the Food and Drug Administration (FDA) approved two monoclonal antibodies (mAbs)—daratumumab and elotuzumab—for treating MM. Both target glycoproteins found on the surface of MM cells, CD38 and SLAMF7, respectively. Another anti-CD38 mAb, isatuximab-irfc, was approved by the FDA in 2020. Rounding out the currently FDA-approved treatment modalities for MM are the pan-histone deacetylase inhibitor panobinostat (2015) and the nuclear export inhibitor selinexor (2019). The success of these therapeutic advances over the past four decades is attested to by the more than doubling of the disease’s five-year survival rate, from 24.5% in 1975–77 to 55.1% in 2010–2016 [5]. Nevertheless, MM remains largely incurable and relapse and refractoriness to treatment continue as major problems [4], spurring the search for newer molecular targets and discovery of drugs exquisitely designed to modulate the actions of these targets.

B-cell activating factor (BAFF; BLyS; TALL-1) and APRIL (a proliferation-inducing ligand) are two homologous members of the tumor necrosis factor (TNF) superfamily [6][7] that have received much recent attention for their roles in the pathology of lupus erythematosus, rheumatoid arthritis, and other autoimmune diseases [8][9]. There also is evidence that the production of both of these cytokines in the bone marrow microenvironment plays a key role in the viability and proliferation of myeloma cells [10]. Moreover, MM disease progression and prognosis have been linked with BAFF and APRIL serum levels [11]. Both BAFF and APRIL serve as ligands for two TNF receptor family members located on the myeloma cell surface—transmembrane activator and calcium modulator and cyclophilin ligand interactor (TACI) and B-cell maturation antigen (BCMA). In addition, BAFF binds to a third myeloma cell receptor, BAFF-R (Figure 1). 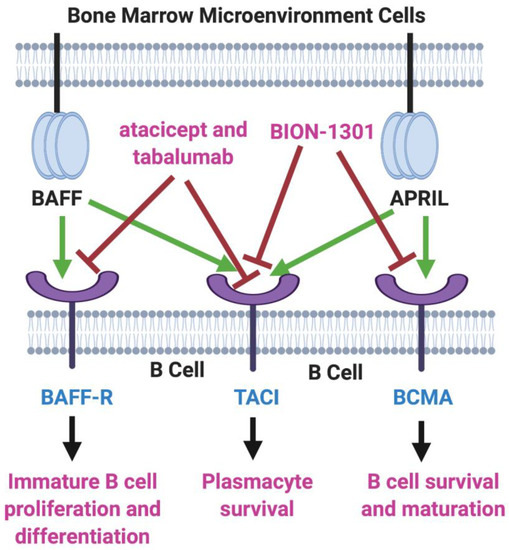 Figure 1. BAFF/APRIL/BCMA Axis. Tumor necrosis factor (TNF) family members BAFF (B-cell activating factor) and APRIL (a proliferation-inducing ligand) are cytokines secreted in the bone marrow microenvironment that play key roles in B cell development, as well as in supporting the viability and proliferation of plasma cells in multiple myeloma. Both BAFF and APRIL serve as ligands for two receptors on the myeloma cell surface—transmembrane activator and calcium modulator and cyclophilin ligand interactor (TACI) and B-cell maturation antigen (BCMA). BAFF also binds to BAFF-R, another myeloma cell receptor. The receptor blockers shown, atacicept, tabalumab, and BION-1301, have been studied in MM patients but have failed to provide evidence of efficacy. On the other hand, inhibitors of BCMA have demonstrated great potential in the therapy of MM. Created with BioRender.com.

Two inhibitors of both BAFF and APRIL, atacicept and tabalumab, each have been studied in several immune-related conditions, including MM, but have failed to exhibit substantial efficacy in any trials [12][13]. Moreover, BION-1301, a humanized anti-APRIL antibody, that had been considered a possibility for clinical development in MM has been dropped from further consideration in myeloma due to failure to achieve objective responses in a phase I study (NCT03340883) [14].

However, the bulk of attention on the BAFF/APRIL/BCMA axis in MM has been focused on BCMA as a major target of interest, particularly in three immunotherapy fronts: as a mAb (both naked and drug-conjugated); as a component of the bispecific T-cell engager (BiTE) strategy; and in conjunction with chimeric antigen receptor (CAR) T-cell therapy.

BCMA (CD269; TNFRSF17), also a member of the TNF receptor superfamily, was first identified in the early 1990s [15][16][17][18]. Expression of this 184-amino acid glycoprotein plays a major role in B-cell maturation and differentiation into plasma cells [19]. Structurally, BCMA is comprised of three major domains: extracellular (amino acids 1–54, linked by disulfide bonds at positions 8–21, 24–37, and 28–41), transmembrane (amino acids 55–77), and cytoplasmic (amino acids 78–184). In normal human tissues, both BCMA protein and mRNA are found almost exclusively on plasma cells and are selectively overexpressed during plasmacyte malignant transformation, promoting tumor cell growth, survival, and drug resistance, primarily through activation of the NFκB, AKT, phosphoinositide 3-kinase (PI3K), STAT3, and MAPK intracellular signal transduction cascades [20][21][22][23][24]. This consistent elevation and virtually sole confinement of BCMA on the surface of MM cells from both cell lines and patient samples has made BCMA a compelling target for drug discovery and development in MM [25][26]. In addition, several studies have provided substantial evidence pointing to the value of using membrane bound BCMA measurements not only as a biomarker for MM diagnosis and prognosis, but also as a possible predictor of response to treatment [27]. Moreover, the finding that BCMA is expressed at similar levels during the various stages of MM, from previously untreated to relapse, suggests that BCMA may be a valid therapeutic target throughout the course of the disease [28].

Blood levels of a soluble form of BCMA (sBCMA), the result of the shedding of BCMA from the plasma cell surface due to cleavage by γ-secretase [29], have been shown to be elevated in MM patients and are linked to inferior clinical outcomes [30]. sBCMA, which is comprised of the extracellular domain plus a portion of the transmembrane domain of BCMA [29], not only lowers the density of the target antigen but also provides a soluble decoy capable of limiting the efficacy of anti-BCMA agents currently under development. This potential hurdle has stimulated the search for γ-secretase inhibitors, which already have attained a prominent role in the quest for drugs to treat Alzheimer’s disease and a number of Notch-overexpressing cancers [31][32], as well as to enhance outcomes in BCMA-directed therapies [33][34].

The armamentarium of available treatment modalities for MM, formerly restricted to alkylating agents and corticosteroids, has changed dramatically in the past two decades with the introduction of agents working by novel mechanisms, such as proteasome inhibition, immunomodulation, and CD38 blockade. The collective effect has been a remarkable improvement in the disease’s five-year survival rate. However, this success is tempered by the almost invariable relapse and refractoriness to treatment that eventually emerge. This has spurred an ongoing quest for innovative targets subject to control through new drug discovery efforts, especially in the relapsed/refractory setting. One such target is BCMA, whose virtually exclusive confinement to malignant plasma cells has attracted much attention as an immunotherapeutic point of attack in myeloma-based new drug development. In this there is some reason for optimism.

In support of that positive outlook is the BCMA-targeting ADC belantamab mafodotin (GSK2857916), the subject of two recently launched phase III trials wherein the drug is combined with either pomalidomide or daratumumab plus bortezomib. The results of these and other future trials will help determine the eventual role of ADCs in myeloma-based therapeutics. In addition to its comparative simplicity of manufacture and consequential cost-savings benefit, a significant advantage of this ADC over other BCMA-targeted immunotherapies is that it carries virtually no risk of potentially lethal CRS.

Although several T-cell engaging bispecific antibodies targeting BCMA have been developed for treating MM, to date none has been included in myeloma studies beyond early phase trials. The most advanced member of this group, the BiTE construct AMG 420, has shown some encouraging efficacy but suffers from the requirement for continuous intravenous infusion although intermittent dosing is being investigated [35]. The related BiTE product, AMG 701, with its extended half-life and potential for once-weekly dosing may offer a more suitable alternative for future large-scale development in this drug class [36]. Several additional T-cell engaging products with similarly favorable pharmacokinetics recently have entered RRMM trials.

Most of the current interest in the prospects for immunotherapy in RRMM lies in CAR T-cell technology. Since the successful 2017 introduction of two CD19-targeting CAR T-cell products for certain B-cell leukemias and lymphomas (tisagenlecleucel and axicabtagene ciloleucel), there has been a flurry of activity geared toward the development of similar type constructs targeting BCMA. At this point, the two leading candidates appear to be Idecabtagene vicleucel (bb2121) and JNJ-68284528 (LCAR-B38M), both of which are in phase III trials. In the meantime, a number of products in this class continue to enter the pipeline each year and the flow shows no sign of abating. As the field continues to mature and engineering and manufacturing technologies evolve toward optimization and planning for future trials of these products moves forward, serious challenges need to be addressed if CAR T-cell technology is to take its place in the spectrum of accepted regimens available to treat MM, not only in the relapsed/refractory stage but perhaps eventually in earlier lines of therapy for the disease. Investigations aimed at informing dose levels compatible with maximizing response depth and durability while reducing adverse effects, especially CRS, continue apace. In addition, studies of additional efficacy determinants, such as kill-switch design and employment and the role, mode, and mechanism of lymphodepletion, will continue to determine the utility of CAR T-cell therapeutics in RRMM going forward. In the background looms the question of how the process can be made applicable to allogeneic products that offer off-the-shelf advantages, even as a few attempts to develop such products have begun to appear on the scene. The challenges ahead are formidable but the current level of activity in the myeloma-based CAR T-cell therapeutics arena augurs well for a promising future in which BCMA will continue to play a major role as a highly attractive target for conceptualizing new drug design and development, as well as a potential cure for this unrelenting disease.