Melanoma is a malignant tumor that originates from melanocytes. Although melanoma mainly occurs in the skin (cutaneous melanoma), it can also occur in the eyes (uveal melanoma), gastrointestinal tract, oral mucosa and genital tract (mucosal melanoma) [1][2][3][4][5].

The incidence of melanoma has risen at an increasing global rate per year at 2–7% annually [6]. The risk of developing cutaneous melanoma is known to be higher in Caucasian than in Asian or African subjects, which indicates that the development of cutaneous melanoma is closely related to skin pigmentation since melanin, especially eumelanin, has been shown to have a protective function against UV-induced mutagenesis in the skin [7][8][9]. Several important risk factors that have been linked to the development of melanoma have been identified, including environmental factors, such as exposure to ultraviolet (UV) radiation, and host factors, such as family history [10][11]. As melanoma is one of the most serious and malignant cancers worldwide, efficient biomarkers are needed for early detection, efficient monitoring of the disease, and reliable prediction of survival and recurrence. A number of potentially useful melanoma biomarkers have been reported [12][13][14][15][16][17][18][19][20][21][22][23][24][25][26][27][28][29][30][31][32][33][34][35][36][37][38][39][40][41][42][43][44][45][46][47](Table 1). Among those, 5-S-cysteinyldopa (5SCD) is one of the most widely used and well-known melanoma biomarkers, especially in Japan. 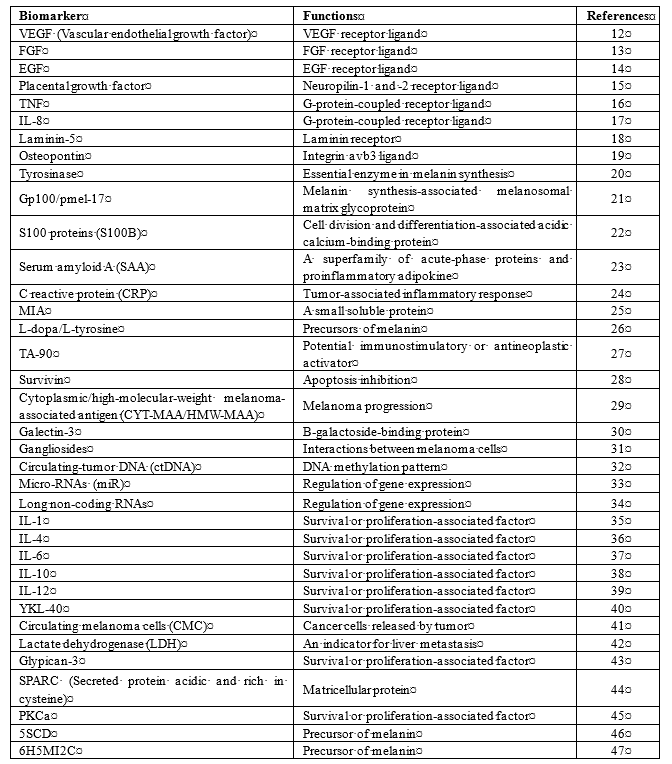 2. 5SCD as a Marker of Melanoma Progression

Serum levels of 5SCD were measured in 2648 samples taken from 218 Japanese melanoma patients in order to evaluate the usefulness of 5SCD as a progression marker of melanoma [46] (Tables 2 and 3). Levels of 5SCD were significantly elevated above the upper limit of the normal range (10 nmol/L) in stage IV melanoma patients, which suggested that elevated 5SCD values might be regarded as a sign of metastatic melanoma. This study included the largest number of patients and samples used to evaluate the clinical significance of serum levels of 5SCD, except for a report by Bánfalvi et al. in which 252 patients were examined [48]. The sensitivity of elevated serum 5SCD values (>10 nmol/L) to detect distant metastasis (stage IV) was 73% in 62 patients with metastatic melanoma, and the specificity in identifying the absence of distant metastasis was 98% in 156 patients with no apparent distant metastases. The sensitivity was improved to 77% when cases of amelanotic melanoma were excluded. Serum levels of 5SCD before surgical excision of tumors were determined for 141 patients [46]. The mean 5SCD value for those 141 patients was 15.7 nmol/L. The median 5SCD values for stage IV melanoma patients was significantly higher than healthy subjects and patients at melanoma stages I–III (p < 0.001). Serum levels of 5SCD were found to increase in a stage-dependent manner, especially for stage IV patients who had particularly high values. Stage IV patients with normal values tended to have amelanotic tumors, skin metastases only or hardly detectable metastases. According to an extensive study carried out in Sweden, the sensitivity of urinary levels of 5SCD to detect metastatic melanoma (stage IIIB and IV) was 60% in 161 patients, and the specificity was 98% in 410 patients. The sensitivity of serum levels of 5SCD to detect distant metastasis was reported to be 70% by Bánfalvi et al. [48]. These studies have shown that 5SCD levels often do not increase in patients with amelanotic melanoma [46][49]. On the other hand, it was known that serum 5SCD in mucosal and uveal melanoma show higher levels [49].

Table 3. Frequency of elevated levels of serum 5SCD according to the presence or absence of metastasis. 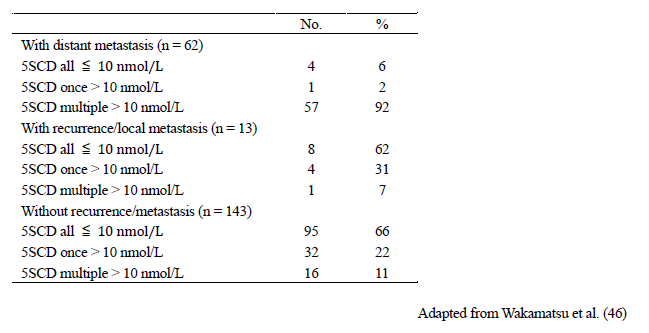 Follow-up of melanoma patients until the end stage revealed an exponential increase in the serum levels of 5SCD in most of those patients. The median value of 20.1 nmol/L at the time of visceral metastasis rose to 249 nmol/L shortly before death. Thus, 5SCD values appear to reflect the tumor burden right up to the end stage. The sharp rise in 5SCD levels during the progression of the disease appears to make 5SCD a particularly sensitive marker for monitoring the response to therapy. In summary, in 42 of the 49 melanoma patients (86%) with visceral metastases (stage IVB), an elevation of serum levels of 5SCD above 10 nmol/L was observed. In 19 of the 49 patients, serum 5SCD values were obtained at the onset of skin/lymph node metastasis (stage IIB to IVB) and 12 of those 19 patients (63%) had elevated 5SCD levels. The elevation of serum levels of 5SCD preceded clinical detection of visceral metastases in 16 of the 49 patients with progressive disease (33%), while the elevation coincided with the detection of visceral metastasis in 18 patients (37%). Thus, serum 5SCD values are as effective as conventional physical examinations and imaging techniques in detecting visceral metastases [46].

Kärnell et al. reported urinary 5SCD and 6H5MI2C in 92 patients with melanoma during chemotherapy [50]. The sensitivity of 5SCD for the detection of stage III–IV melanoma was 83%, while the corresponding sensitivity of 6H5MI2C was 52%. A significant correlation was found between 5SCD decrease and clinical regression (p < 0.001) and between 5SCD increase and clinical progression (p < 0.001). Corresponding correlations were not found for 6H5MI2C. Thus, the use of 5SCD was recommended as a valuable, reliable and simple biochemical markers to use in the clinical follow-up of melanoma patients with advanced disease. Johansson et al. showed the use of reverse transcription polymerase chain reaction (RT-PCR) analysis of melanoma specific transcripts for the identification of circulating melanoma cells [51]. Pigment-related and S100 calcium-binding protein B (S100B) transcripts were quantified in 12 different melanoma cell lines and related to the 5SCD levels, pigment and S100B. Tyrosinase, tyrosinase-related protein-1, and tyrosinase-related protein-2 mRNA correlated significantly with 5SCD levels. The amount of S100B mRNA correlated significantly with the amount of S100B (p < 0.001). The measurement of S100B mRNA was more sensitive, but the use of this transcript was hampered by its presence in the blood cells.

Melanoma is one of the most lethal cancers worldwide, but still there are not efficient serum biomarkers to conduct an early detection and an efficient monitoring of the disease. Therefore, it is of utmost importance to discover novel circulating markers in order to implement diagnosis, prognosis and treatment of this malignancy. 5SCD is an excellent candidate due to its potential informative power about important tumor features, the theoretical possibility to use it as an early-stage melanoma marker and the advantages of the detection method compared to biopsies. The serum level of 5SCD is a sensitive and specific marker for predicting the presence of distant melanoma metastases when analyzed regularly. The elevation of serum levels of 5SCD to >10 nmol/L often precedes the clinical detection of visceral metastases. This method is therefore useful in following up outpatients with suspected metastatic melanoma when combined with physical examinations and the routine use of clinical laboratory tests. Serum levels of 5SCD could be used to accurately assess therapy responses in future clinical trials for the treatment of advanced melanoma.