This entry provides an overview on the active phytochemical constituents of twenty-seven medicinal plants that are traditionally used to manage cancer in Ethiopia. It is compiled and discusses the potential anticancer, antiproliferative, and cytotoxic agents based on the types of secondary metabolites, such as terpenoids, phenolic compounds, alkaloids, steroids, and lignans. Among the anticancer secondary metabolites reported in this review, only few have been isolated from plants that are originated and collected in Ethiopia, and the majority of compounds are reported from plants belonging to different areas of the world. Thus, based on the available bioactivity reports, extensive and more elaborate ethnopharmacology-based bioassay-guided studies have to be conducted on selected traditionally claimed Ethiopian anticancer plants, which inherited from a unique and diverse landscape, with the aim of opening a way forward to conduct anticancer drug discovery program.

The Ethiopian flora is estimated to contain 6027 species of higher plants of which more than 10% are estimated to be endemic [1]. Different authors have compiled ethnobotanical and ethnopharmacological profiles and reviews of Ethiopian traditionally used medicinal plants [2][3]. However, published reports regarding isolated bioactive compounds of traditionally used Ethiopean medicinal plants, especially those with cytotoxic properties are scant. Thus, for further evaluation, identification, or modification of anticancer leads, thorough review of the chemistry and pharmacology of medicinal plants from relatively uncovered traditional medical systems is crucial. Therefore, in continuation of our previous mini-review [4], in which we documented both ethnobotanical and ethnopharmacological evidence of Ethiopian anticancer plants involving mostly the cytotoxic and antioxidant activities of crude extracts, here, in this review, we comprehensively document the cytotoxic and antiproliferative constituents from 27 anticancer plants that are traditionally used in Ethiopia. The secondary metabolites reported from each medicinal plant species are categorized based on the class of natural products they belong to.

Several terpenoids have been isolated from Ethiopian plants that have claims of having anticancer activity, although these plants may have been collected from other sources. For example, sonhafouonic acid (8) from Zehneria scabra, collected from Cameroon, demonstrated potent cytotoxicity against brine shrimp assay [8], while Lin et al. [9] showed the antiproliferative activity of euphol (9), isolated from Euphorbia tirucalli from Taiwan against human gastric cancer cells. Euphol selectively promotes apoptosis by mitochondrial-dependent caspase-3 activation and growth arrest through induction of p27kip1 and inhibition of cyclin B1 in human gastric CS12 cancer cells. It also showed a selective and strong cytotoxicity against other groups of human cancer cell lines such as glioblastoma (the most frequent and aggressive type of brain tumor) [10]. The molecular mechanism of action of another anticancer triterpenoid, maslinic acid (10), isolated from the leaves of Olea europaea has been studied, which induced apoptosis in HT29 human colon cancer cells by directly inhibiting the expression of Bcl-2, increasing that of Bax, releasing cytochrome-C from the mitochondria and activating caspase-9 and then caspase-3 [11]. Similarly, the leaf extract of Ricinus communis collected from Malta was also reported for its cytotoxicity against several human tumor cells and induction of apoptosis against human breast tumors, SK-MEL-28. The monoterpenoids 1,8-cineole, camphor and α-pinene, and the sesquiterpenoid β-caryophyllene, isolated from R. communis, also showed cytotoxicity against similar cell lines in a dose-dependent manner [12].

Jatropha curcas is a medicinal plant traditionally used to treat a variety of ailments in different parts of the world including Ethiopia. Investigation of J. curcas, collected from China, resulted in the isolation of twelve phorbol esters (diterpenoids) including jatrophalactone (11), curcusecon A–J, 4-epi-curcusecon E, curcusone E, 3-dehydroxy-2-epi-caniojane (12), curcusone A (13), curcusone B (14), curcusone C (15), curcusone D (16), jatrogrosidone, 2-epi-jatrogrossidone, and 4E-jatrogrossidentadion (17). Most of these compounds showed potent cytotoxicity with IC50 values ranging from 0.084 to 20.6 µM against HL-60, SMMC-7721, A-549, MCF-7, SW480, and HEPG2 cell lines [13]. 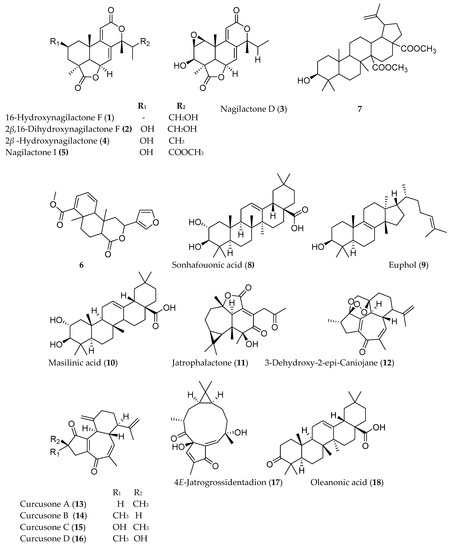 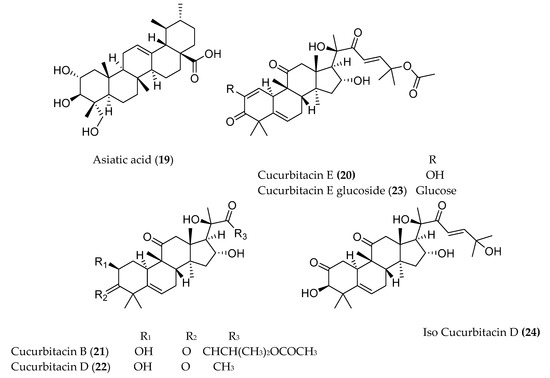 Phenolic compounds are biosynthesized by plants through shikimate, phenylpropanoid, and flavonoid pathways, and have an aromatic ring bearing one or more hydroxyl groups. These compounds have been reported for their antioxidant, antiproliferative, and cytotoxic properties [17]. Many phenolic compounds have been identified elsewhere from the same medicinal plants that are traditionally used to manage cancer in Ethiopia. For instance, (−)-epigallocathechin (25) isolated from Maytenus senegalensis has showed potent cytotoxic activity against mouse lymphoma cell line (L5178Y) [18]. Likewise, a series phenanthrenes (5-(1-methoxyethyl)-1-methyl-phenanthren-2,7-diol (26); effususol A; effusol; dehydroeffusol; dehydroeffusal; 2,7-dihydroxy-1,8-dimethyl-5-vinyl-9,10-dihydrophenanthrene and juncusol; dehydrojuncusol and 1-methylpyrene-2,7-diol) from Juncus effuses inhibited the proliferation of five human cancer cell lines. Among these, 5-(1-methoxyethyl)-1-methyl-phenanthren-2,7-diol (26) (Figure 2) was tested against MCF-7 cancer cell line and showed better cytotoxic activity [19] than all isolated compounds from J. effuses. Another group of phenanthrenoids (effususol A, 27) has also demonstrated potent cytotoxicity against HT-22 cell by inducing caspase-3-mediated apoptosis [20]. Plumbagin (28), a naphthoquinone isolated from Plumbago zeylanica also induced apoptosis in human non-small cell lung (IC50 = 6.1–10.3 µM) [21] and human pancreatic (IC50 = 2.1 µM) [22] cancer cell lines. On the other hand, knipholone (29) isolated from Kniphofia foliosa Hochst collected from Ethiopia, induced necrotic death in mouse melanoma (B16), mouse macrophage tumor (RAW 264.7), human acute monocytic (THP-1), and promonocytic leukaemic (U937) cell lines with IC50 values that range from 0.5 ± 0.05 to 3.3 ± 0.39 µM [23]. 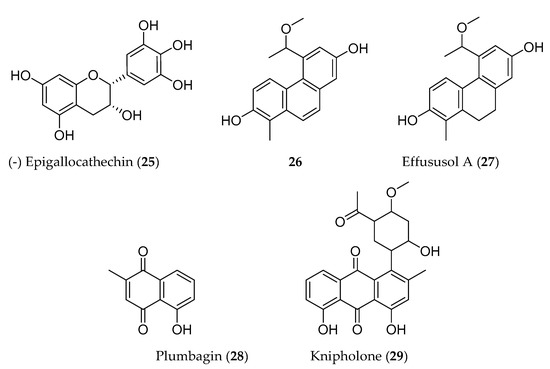 Vinblastine (30) and vincristine (31) (Figure 3) are one of the most effective bis-indole vinca alkaloids as anticancer drugs, isolated from the leaves of Catharanthus roseus. This is one of the most precious anticancer plants indigenous to Madagascar. Wang et al. [24] isolated three new cytotoxic dimeric indole alkaloids (32–34) along with other five known compounds from the whole plant of C. roseus collected from China. Among the isolated compounds, leurosine (36) showed the most potent cytotoxic activity with IC50 value of 0.73 ± 0.06 µM. Furthermore, the isolated three new compounds (32–34) also showed potent cytotoxicity against triple-negative breast cancer (MDA-MB-231) cell line with IC50 values ranging from 0.97 ± 0.07 µM to 7.93 ± 0.42 µM. Another alkaloid, cathachunine (40), also showed a promising cytotoxic activity against HL-60 by inducing an intrinsic apoptotic pathway [25]. On the other hand, the monoterpenoid indole alkaloids vindoline and catharanthine, isolated from Malaysian V. roseus, showed weak cytotoxic activity against HCT 116 [26]. Furthermore, colchicine (41), isolated from the seeds of Gloriosa superba, demonstrated moderate activity against six human cancer cell lines (A549, MCF-7, MDA-MB231, PANC-1, HCT116, and SiHa) [27]. 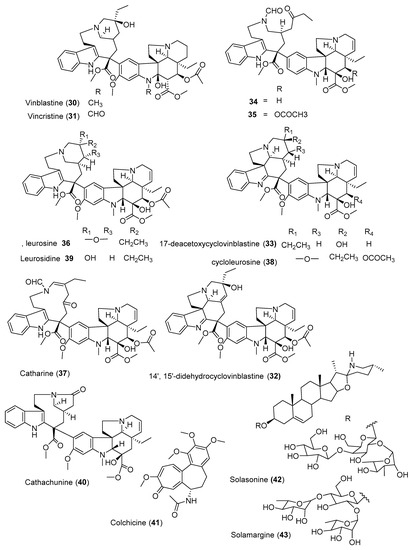 Lignans and isoflavonoids are the major classes of phytoestrogens which showed potential anticancer activity against various cells. Three lignans, namely, (−)-carinol (50), (−)-carissanol (51), and (−)-nortrachelogenin, isolated from Carissa spinarum, were found to be cytotoxic against A549, MCF-7, and WI-38 cell lines. Among these, (−)-carinol (i.e., a compound with butanediol structure) showed more potent cytotoxic activity against these three cell lines with IC50 value of 1 µg/mL, as compared to (−)-carissanol and (−)-nortrachelogenin [32]. Secoisolariciresinol (52) and matairesino (53), two lignans isolated from Linum usitatissimum, exhibited cytotoxicity against MCF-7 cells with IC50 values of 10 and 1 µM, respectively [33]. 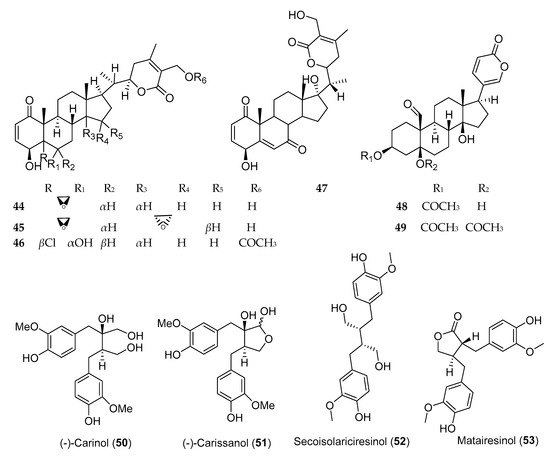 Figure 4. Structures of anticancer steroids and lignans reported from plants available in Ethiopia.

The majority of compounds reported in this review are isolated from plants (corresponding to Ethiopian species) that were collected from different regions of the world. However, the comprehensive list of active compounds provided in this review will help to identify the most potent source(s) of these compounds, as bioactive marker(s), of local flora (see Tables in full paper: 10.3390/molecules25174032 ). Based on the higher frequency of citation Croton macrostachyus, Jatropha curcas, Plumbago zeylanica, and Vernonia hymenolepsis are potential candidates for follow-up bioassay guided investigations. Furthermore, plants with reported antiproliferative compounds such as Podocarpus falcatus, Linum usitatissimum, and Zehneria scabra should also be examined for additional cytotoxic compounds and evaluated against a battery of cancer cell lines.