Galectins are composed of a family of widely expressed β-galactoside-binding lectins and can modulate basic cellular functions such as “cell-to-cell” and “cell-to-matrix” interactions, cell growth and differentiation, tissue regeneration and the regulation of immune cell activities [1][2][3]. Galectins have been classified according to their carbohydrate recognition domain (CRD) number and function. The CRDs recognize β-galactoside residues that form complexes that crosslink glycosylated ligands [4][5][6]. The following three types of galectin members are widely accepted (Figure 1): (1) prototype galectins (galectin-1, -2, -5, -7, -10, -11, -13, -14, and -15), containing a single CRD that form noncovalent homodimers; (2) tandem-repeat galectins (galectin-4, -6, -8, -9, and -12), carrying two CRD motifs connected by a peptide linker and (3) a chimera-type galectin (Gal-3), which is characterized by having a single CRD and an amino-terminal polypeptide tail region [2][5][6]. The members of galectins, numbered consecutively by order of discovery, are ubiquitously present in vertebrates, invertebrates and, also, protists [1].

Heart diseases are a leading cause of death worldwide, killing approximately 17.9 million people each year. Individuals at risk of heart disease may demonstrate an elevated body weight, blood pressure, plasma cholesterol and blood glucose, as well as obesity. These factors can be easily measured in primary healthcare services. In addition to these standard measures, the use of molecular biomarkers may provide a much earlier detection of heart disease, thereby providing earlier and more efficacious therapeutic interventions. The detection of ideal molecular biomarkers, those that are both sensitive and specific to heart disease, are likely to provide an early diagnosis and suggest specific targeted therapy. However, to date, such ideal biomarkers of heart disease have yet to be identified, despite advances in technologies such as multiplex molecular and genetic biomarkers [1][2]. Galectin-3 (Gal-3) might be a candidate molecular heart disease biomarker.

The use of molecular biomarkers for the early detection of heart disease, before their onset of symptoms, is an attractive novel approach. Ideal molecular biomarkers, those that are both sensitive and specific to heart disease, are likely to provide a much earlier diagnosis, thereby providing better treatment outcomes. Galectin-3 is expressed by various immune cells, including mast cells, histiocytes and macrophages, and plays an important role in diverse physiological functions. Since galectin-3 is readily expressed on the cell surface, and is readily secreted by injured and inflammatory cells, it has been suggested that cardiac galectin-3 could be a marker for cardiac disorders such as cardiac inflammation and fibrosis, depending on the specific pathogenesis. Thus, galectin-3 may be a novel candidate biomarker for the diagnosis, analysis and prognosis of various cardiac diseases, including heart failure.

Furthermore, Gal-3 may also be useful for detecting very early stage of some diseases. Gal-3 has been validated as a biomarker of fibrotic degeneration in acute myocarditis following cardiac viral infection. In an animal model of heart failure, serum Gal-3 levels was shown to be used as an diagnostic biomarker for early detection of cardiac degeneration in acute myocarditis and acute myocardial infarction. Furthermore, Gal-3 is also a good specific marker for indicating the early stage of glioma tumorigenesis https://pubmed.ncbi.nlm.nih.gov/23179497/. 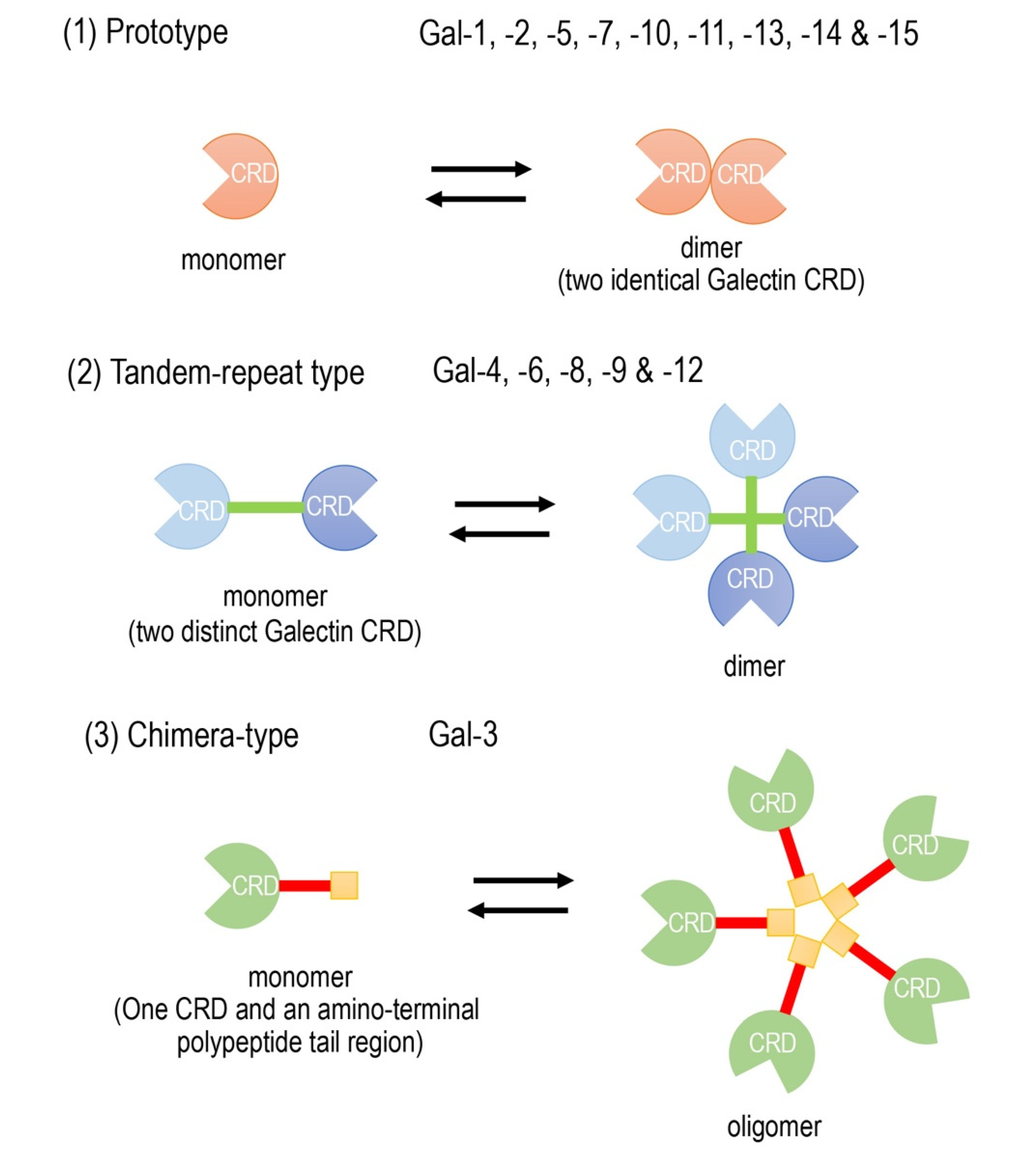 Figure 1. Schematic diagram of the galectin family members. Galectin members are divided into three types based on the organization of the galectin carbohydrate recognition domain (CRD).

2. Clinical Use of Gal-3 as a Next-generation Biomarker in the Future

In a clinical setting, since various degrees of cardiac inflammation and the progression of fibrosis may be present in a patient with heart disease, blood Gal-3 levels may reflect a sum of different stages of pathophysiological conditions [5]. This is because the circulating blood levels of Gal-3 in a patient with various stages of heart disease cannot adequately reflect cardiac inflammation and fibrosis.

An endomyocardial biopsy is widely used as a diagnostic tool for patients with heart disease, such as myocarditis and secondary cardiomyopathies, which are often difficult to diagnose by conventional imaging alone [6]. There are many variables in human biopsy material by its nature, unlike those obtained from experimental animals. Human biopsies are usually performed under different conditions, variable time periods between biopsy and processing and variations in disease onset or severity. However, the histological examination of an endomyocardial biopsy is still the gold standard for the final diagnosis, despite continued advancements in diagnostic and therapeutic strategies [7][8][9].

In contrast to the clinical data, the blood levels of Gal-3 reflect the cardiac Gal-3 expression or cardiac fibrosis by using a sophisticated animal model for the time-course histological examination. Especially in the early phase of pathophysiology, there is a close relationship between the infiltration of Gal-3-positive macrophages and fibrotic lesions following myocarditis, and the blood levels of Gal-3 are tightly correlated with the number of cardiac Gal-3-positive cells [10]. The difference between the experimental data from animal studies and clinical findings from individual patients is due to a wide variability in clinical settings, with differences in sample collections and disease stages or severity.

Since experimental data from animal studies clearly indicate that the blood level of Gal-3 might be an early diagnostic biomarker for cardiac degeneration or fibrosis in acute myocarditis [10], further studies are needed to investigate whether such findings are also observed in cardiac degeneration or fibrosis in human patients. Gal-3 can be used reliably as a predictive biomarker for the early stage or new onset of heart disease, especially if it is derived from only the first single pathological lesion, without complicated factors. In addition, Gal-3 can also possibly be used in late stages of the diseases as an additional indicator for detecting a worse prognosis, mortality and readmission.

The blood levels of Gal-3 are altered by different clinical factors depending on the underlying pathophysiological conditions in patients, and thus, Gal-3 itself is not an organ-specific marker. However, Gal-3 is a specific marker of pathogenesis, such as macrophage-related disease or fibrosis, and the cardiac-infiltrating macrophages expressing Gal-3 in the early stages are potential therapeutic targets for cardiac fibrosis and remodeling. Therefore, the early detection of such Gal-3-producing macrophages by a diagnostic marker is important. Furthermore, Gal-3 is being tested for personalized medicine based on biomarker-guided diagnostics, using new technologies such as genetic biomarkers and multiplex biomarkers, combining multiple markers into a multiplex panel. In pediatric heart surgery, the clinically available biomarker Gal-3 can be used for improved risk stratification, because Gal-3 has recently been reported to be associated with an increased risk of readmission or mortality after the operation. In addition, Gal-3 at the early stages of inflammatory responses may be a potential therapeutic target for diseases, especially in cardiac fibrosis, autoimmune diseases, neurodegenerative diseases and cardio- and cerebrovascular diseases.