Supercapacitors are electrical devices for fast storage and release of electric energy utilizing charge accumulation in the electrochemical double layer. In terms of volumetric and gravimetric capacities they exceed conventional dielectric and electrolytic capacitors by several orders of magnitude. However, the low energy density of supercapacitors has seriously limited their wider application in many fields. Increase of energy density highly depends on development of a new generation of advanced electrode materials for supercapacitors.

Supercapacitors are devices enjoying growing popularity in many fields of electrical engineering as technological option for short-term storage of electric energy at very high electric power during both storage and release. In electric double layer capacitor (EDLC) capacitors they utilize the basic concept of charge separation in a conventional capacitor with two electrodes and an insulating dielectric in between combined with employing the electrochemical double layer and its specific capacitance of about 20 μF·cm-2 per electrochemically active surface area EASA [1]. Values may vary, for carbon numbers ranging from a few μF·cm-2 up to 150 μF·cm-2 have been reported1, [1][2]. When electrode materials with large surface areas like pellets of compressed activated carbons with very large BET surface areas are used the actual capacitance measured at one electrode can easily reach values of several hundred F·g-1. When two electrodes of this kind with two interfacial capacitances Cdl are combined into a supercapacitor large capacitances C result according to

Conceptual relationships between the various types of capacitors addressed above are schematically illustrated in Fig. 1. The electrolytic capacitor also employing electrochemical principles is a step between the conventional design (Figure left) and the supercapacitor (Figure right). 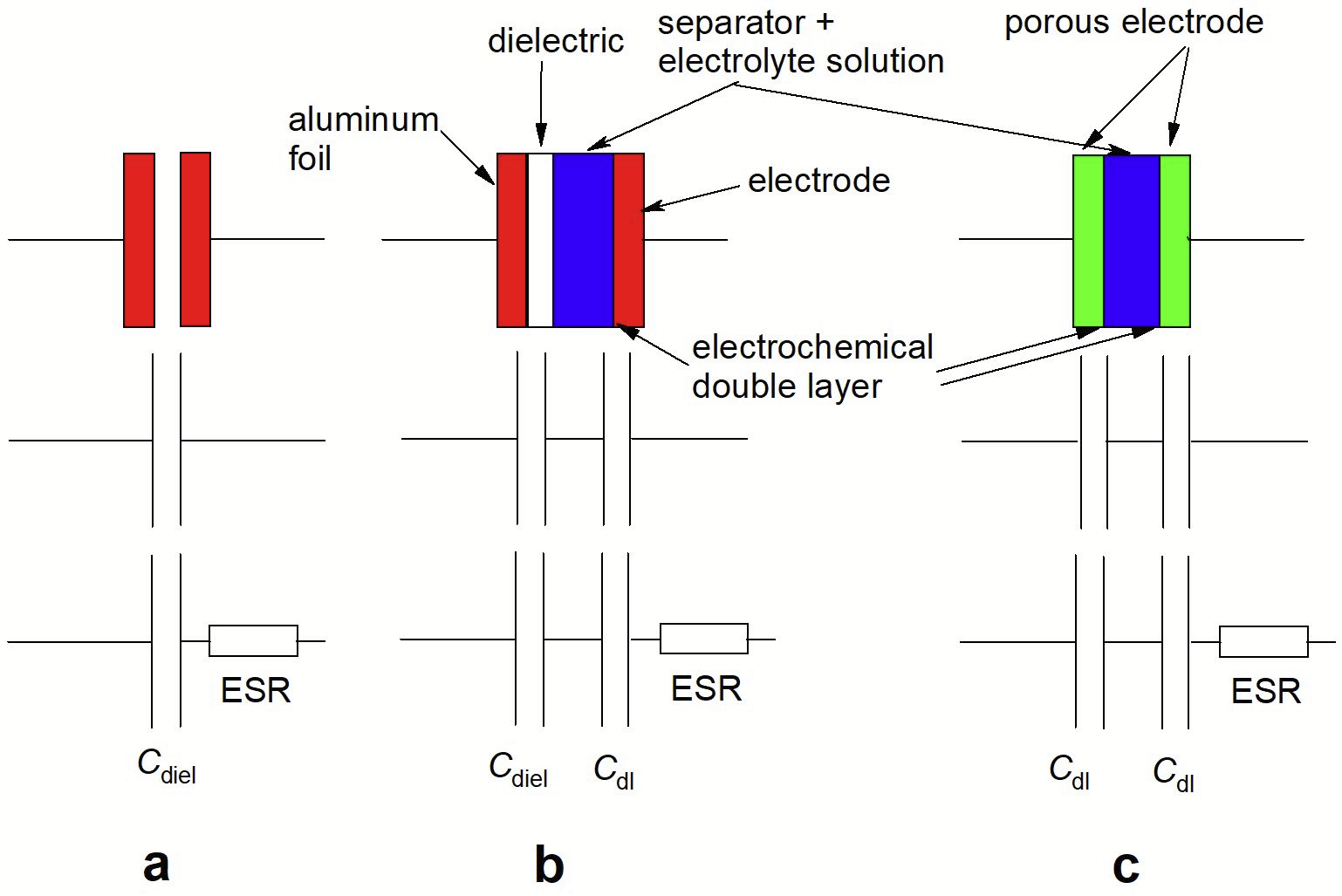 Supercapacitors have been established as means of electrical energy storage in a vast range of sizes from tiny ones in environmental and medical applications across numerous mobile applica­tions in e.g. telecommunication to large ones in electric vehicles in mass transit. Introductory overviews are available [3][4][5]], in numerous monographs presumably all aspects from basic func­tional principles on to materials and applications are treated [6][7][8][9][10][11]. Initially carbon-based elec­trode materials were used preferably utilizing the electrochemical double layer capacity for charge and thus energy storage (EDLC supercapacitors) [12][13]. Tremendous power densities have been achieved whereas energy densities are still disappointingly low. Numerous attempts to improve the energy density without sacrificing power density and stability have been reported [14].

1) Improve utilization of the active materials (e.g. activated carbon) by optimizing surface area and pore size distribution as well as electric conductivity. To get a higher BET surface area smaller particles and finer pores are needed. The former may improve access of the electrolyte solution and shorten ionic pathways increasing rate (i.e. high current) capability of the electrode material, but beyond a certain pore size wetting of the inner surface area by the electrolyte solution (whether based on water or on organic solvents) may be limited or even inhibited because it cannot penetrate into the pore and wet the internal surface. Consequently, this surface area cannot be fully utilized. In addition, ions being accumulated during charge and dispersed during discharge face growing diffusion hindrances with decreasing pore sizes. Thus, an optimized pore size distribution is one aim. The optimized pore size distribution, for example, the micro/mesopore ratio, will also enhance the rate performance of electrode materials. Evidence that the simple hydrodynamic radius of an ion can be taken as a point of reference for comparison of ion size and pore opening diameter has been reported as being oversimplified, partial desolvation has been suggested [15][16][17]. Ion and thus charge transport in confined environments e.g. with the interlayer distance of 2D materials being within the size of electrolyte ions – this reasoning applies also to carbon nanosheets suggested as active material somehow avoiding complications encountered with graphene and its restacking as discussed below – may differ in terms of solvation shell effects from the situation encountered in a bulk solution [18][19][20]. The electrical conductivity of active materials is another factor that must be considered because it also determines the capacitor’s performance to a certain extent. Nanosized active materials benefit from short ionic pathways and high access to the electrolyte. However, their low electric conductivity also will decrease its effective capacitance. Thus, nanosized active materials with an interconnected structure are more favorable when compared to active materials with a disconnected structure [21].

2) The ionic flux in the electrolyte solution is connected to the flow of electrons in the porous body mostly composed of some kinds of carbon. High electronic conductance is required, too fine pores will negatively affect electronic charge transport because of diminished conductance. Incorporating foreign atoms (sometimes called doping) like nitrogen, phosphorus, oxygen or boron can increase electronic conductance somewhat.

A particularly attractive carbon material is graphene, a layered form of carbon [26][27][28][29][30]. It shows very high electronic conductance, and because of its basically large surface area it promises high capacitance values. Unfortunately, the graphene sheets tend to agglomerate or restack making major parts of the surface area now buried inside the agglomerates inaccessible for the electrolyte solution. Attempts to keep graphene sheets from restacking are pursued [31]. To enable access of electrolyte solution to interlayer spaces porous graphene [32] or Holey graphene have been suggested [33]. How to controllably create suitable pores (micro/mesopore ratio) on graphene without destroying the whole structure of graphene is still a great challenge, since the pore ratio of micro-/mesopores will affect the resulting capacitance as well as the rate performance.

Energy density of a supercapacitor depends critically on the charge storage capability of the electrodes and on the cell voltage. With aqueous electrolyte solution many advantages like low price and high ionic conductance are provided but a major drawback is encountered: The limited cell voltage set by the water decomposition cell voltage. Application of a cell voltage larger than this limit may result in gas evolution, built-up of internal pressure in the cell and ultimately explosion. Electrode materials showing high overpotentials for the respective reactions (i.e. kinetic hindrance) may help to ameliorate this risk. Another option is the composition of the electrolyte solution possibly also affecting the actual decomposition voltage.

The discovery of the pseudocapacitive behavior of many electrode/electrolyte solution interfaces showing surface-confined redox processes [34] of mostly oxides, sometimes also sulfides, suggesting electrode materials with storage capabili­ties one to two orders of magnitude larger with only slightly diminished current capabilities seemed to provide relief and an avenue to supercapacitors with higher energy density [35][36][37][38][39][40]. The materials are sometimes also employed in batteries, this brings the merger of batteries and supercapacitors closer [41][42][43][44] . Unfortunately some of the numerous metal oxides and chalcogenides examined so far showed insufficient stability, mechanisms of deterioration possibly including recrystallization, Ostwald ripening, loss of active surface area, passivation, dissolution or phase transformation are not yet sufficiently understood [45]. Composites of such oxides, more generally chalcogenides, and some form of carbon have been reviewed [46][47]. Because many of the studied chalcogenides are semiconductors or even insulators for practical use they are mostly mixed with conducting carbon (like acetylene black) and a polymeric binder, the distinction between a composite and a simple mixture seems to be difficult. According to published reports, materials where the carbon of the composite is already participating in the chalcogenide synthesis are frequently called composites.

Intrinsically conducting polymers ICPs suggested as active materials for secondary batteries al­most immediately after the discovery of their redox behavior (see e.g. [48][49][50][51][52][53]) have been proposed later as active masses for supercapacitors, too [54][55]. Their use as active mass or as an addi­tional ingredient improving stability and other performance data has been reviewed else­where [56][57][58]. Because of the frequently observed change of the electronic conductance of the ICP as a function electrode potential [59] in most reported studies some form of carbon has been added resulting in a composite material [46][60]. One particularly attractive option appears to be the combination of an ICP with a metal chalcogenide yielding a composite with performance data significantly superior to the respective data of the single components [58][61]. The actual function of the ICP in such com­posites seems to be unresolved in most cases.

Another approach towards enhanced charge storage capability is the incorporation of redox-active organic molecules on the surface of a porous carbon support or an intrinsically conducting polymer [62]. Various ways of adsorptive or even covalent attachment of the redox-active moieties to the support have been suggested, but promising stability of performance data during extended cycling has been observed only in a few cases so far.