Mast Cells (MCs), from the German mast meaning well-fed, were first described by Paul Ehrlich in 1878 based on the unique color-changing granules within these cells. In fact, MCs are easily recognizable with characteristic toluidine blue-positive granules in the cytoplasm. Their granules contain several elements, such as histamine, serotonin, heparin, proteases (chymase, tryptase, carboxypeptidase), cytokines and other growth factors (vascular endothelial growth factor, VEGF; fibroblast growth factor-2, FGF-2). Tryptases and chymases are considered MC-specific proteases, but the granules also contain some non-specific enzymes, such as metalloproteinase-9.

MCs are round or elongated in shape and have diameters ranging from 8 to 20 μm and are bone marrow-derived leukocytes (CD34+) that are not present in avascular tissue[1]; they play a key role in the homeostasis of wound healing as well as in both innate and adaptive immunity. These processes are closely controlled by microenvironmental stimuli, leading to the development of different subtypes.

In contrast to other cells, they leave the bone marrow from an immature non-granulated precursor[2] that circulates in the blood and becomes mature under the influence of growth factors such as stem cell factor (SCF) and the ligand for c-kit receptor (CD117). There are two distinct types of MC: connective tissue and mucosa. Usually, the latter represent 2% of mucosal cells in the healthy gut, but this number can increase in response to different stimuli.

In 1891, an MC was identified by Westphal at the tumor periphery[3]. Since then, several studies have hypothesized the role of MCs in tumor development and progression[4], correlating their infiltration with a poor prognosis in gastrointestinal tumors[5][6][7][8], including CRC[9].

In fact, tumor cells produce SCF, which is the main chemoattractant and survival factor for MCs, with the consequent activation of the c-Kit pathway[10][11][12]. Thus, they are recruited in the initial step of tumorigenesis, promoting the angiogenic switch[13] through the release of anti- or pro-angiogenetic factors based on stimuli received by the TME that can regulate MC and contribute to ECM remodeling, which is crucial for tumor progression, invasion and metastasis. In particular, interleukin (IL)-1, IL-4, IL-6 or Tumor Necrosis Factor alpha (TNF-α) can act as antitumoral factors, whereas FGF-2, VEGF, Matrix Metalloproteinases (MMP-9), tryptase, chymase, IL-8 and IL-10 promote tumorigenesis[14].

Angiogenesis is an indicator of tumor aggressiveness and is essential for tumor spread, providing a vascular route[15]. During tumorigenesis, cancer cells face a shortage of supply of nutrients, which leads to the creation of a hypoxic and acidotic TME. Consequently, angiogenesis can help to restore a sufficient blood supply through the formation of new vessels. In this context, the role of endothelial cells (ECs) is crucial for the ability to suppress recruitment and activity of circulating T cells. Under hypoxic conditions, MCs release IL-6, VEGF-A and C-X-C motif ligand 8 (CXCL8), which promote epithelial-to-mesenchymal transition (EMT) in cancer cells[12].

In this respect, according to Engel et al.[16], the number of microvessels is an important predictor of CRC recurrence and time to recurrence. These results were confirmed by Frank et al.[17] in 105 patients with CRC. Furthermore, MCs regulate lymphangiogenesis by releasing VEGF-C and VEGF-D[18][19]. Marech et al.[11] accurately described the biological and translational significance of MCs density in CRC, pointing out the close relationship between MCs and angiogenesis-mediated tumor progression (Figure 1). 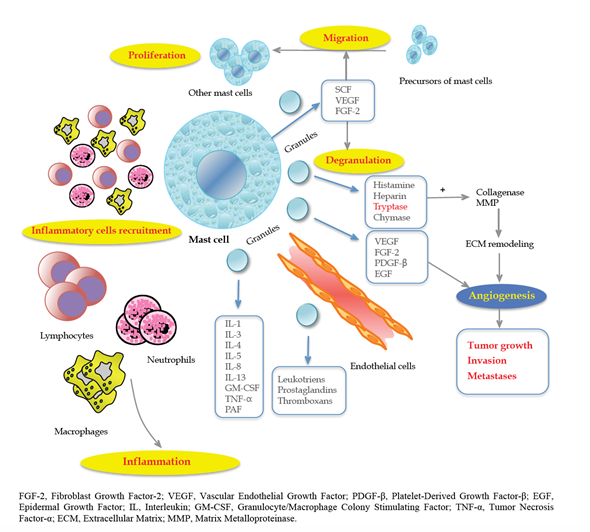 Tryptases are tetrameric neutral serine proteases; they are most abundant in MC secretory granules and are the main stimulating factors of neovascularization and EC proliferation[20].

Two main types of MC tryptases exist: alfa and beta. Alpha-tryptases are stored in the granules of MCs, whereas beta-tryptases circulate in the blood as inactive proenzymes and are the major constituents of secretory granules in humans[21].

Positive MCs tryptase expression has a negative effect on prognosis[22], and its density is associated with advanced tumor parameters and aggressive behavior, i.e., tumor size and lymph node metastasis in solid tumors.

Tryptases are agonists of protease-activated receptor-2 (PAR-2), which belongs to the superfamily of G-protein-coupled receptors and is expressed on EC and epithelial cells. Once activated, PAR-2 induces cell proliferation, releasing angiogenic factors and granulocyte-macrophage colony-stimulating factor (GM-CSF).

Histamine is one of the factors released by MCs, and it exerts its functions through four receptors (H1–H4) and has been involved in CRC development. In fact, patients treated with cimetidine (histamine antagonist) reported a significant symptomatic improvement as well as a survival benefit[23][24]. However, the results regarding the role of histamine are still controversial.

High MC density is correlated with advanced stage, tumor progression and poor outcome in CRC[8][25]. Targeted MC therapy is under development, and only a few studies have tried to investigate this issue[26]. Among these studies, tyrosine kinase inhibitors (imatinib and masitinib) for c-Kit receptor and MC tryptase inhibitors (gabexate mesylate, nafamostat mesylate and tranilast) are the best known and most studied[27][28].

Interestingly, in a series of 61 consecutive patients with CRC, the correlation between serum tryptase levels before surgery and tumor-mediated angiogenesis was demonstrated. The authors concluded that elevated levels of serum tryptases after surgery could be indicative of residual tumor tissue or unknown metastases[9] [33]. Ammendola et al.[28] summarized the main in vivo/in vitro strategies of targeted MC therapy in solid tumors and their metastasis. A better understanding of the complex relationships between the whole angiogenesis signaling pathway and MC can represent the future of therapy aimed at arresting tumor growth in gastrointestinal cancer.