Soil contamination with heavy metals and organic pollutants poses an environmental problem due to their persistence, bioaccumulation and toxicity. Soil washing is one of the most common remediation technologies for permanent removal of undesirable pollutants. The effectiveness of soil washing is affected by many factors such as soil geochemistry, pollutant characteristics, type and chemistry of washing agents, and processing conditions. A variety of washing agents have been tested in soil washing with their different effect on pollutant removal and on the overall quality of treated soil. Development of soil washing is based on searching for an inexpensive, readily-available and environmentally-friendly agents to remediate polluted soils. Despite the unquestionable effectiveness of soil washing, spent washing solutions are generated that need further treatment. This entry presents the principles and application of soil washing technology, as well as the examples of washing agents and methods for liquid waste treatment.

Soil washing is an ex-situ technology, including physical and/or chemical processes that aim to effectively remove pollutants from soil.

Overall, there are many different soil washing systems that are developed, and the systems can vary from site to site due to location-specific constraints for soils or pollutants. In Figure 1, an example of DEKONTA’s soil washing system is presented[6]. 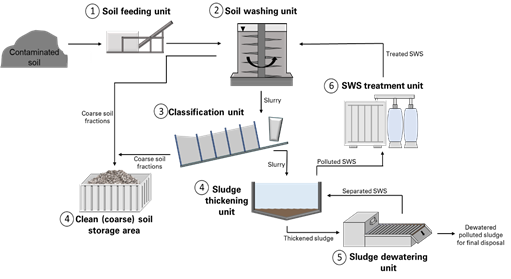 Soil washing is a well-established technology of soil remediation in many European countries (the Netherlands, Germany, Belgium, Switzerland), as well as in North America and Japan[2]. It can be used as stand-alone technology or in combination with other remediation systems for “hot spots” treatment, where the concentrations of pollutants are particularly high. According to Dermont et al.[1], among 37 field soil washings performed in 1989–2007, 43% were based on physical separation, 8% were based on chemical extraction, and 47% were based on physical separation and chemical extraction. Full-scale soil washing plants exist as centralized permanent treatment sites, where polluted soil is brought to the plant, or as mobile/transportable units, where polluted soil is treated on the site.

In the Netherlands, there are five permanent soil washing sites (BMR Schiedam, SBD Amersfoort, BVNN BKD Groningen, GBD Alkmaar, and BVNN BKD Heerenveen) where asbestos-contaminated soil, degraded sediments, sand from sewers, contaminated roof gravel, contaminated granulate, and stony materials are processed[7]. Soil washing is used at many large-scale cleanup sites in the USA, including Miami Harbor, Fox River (Wisconsin), and the King of Prussia Superfund Site[8]. Mobile soil washing systems are modular construction units that can be deployed at different sites. The USA and some European countries (e.g., Sweden) developed mobile soil washing systems in the 1980s and employed the devices in field sites to clean up contaminated soils[9][10]. A pilot-scale mobile soil washing system was proposed by Ko et al.[11] to treat soil polluted with As, Zn, and Ni collected from an iron mining area in Korea. The system consisted of a soil washing scrubber (drum type equipped with an inner screw blade to mix soil with washing solution), a vibrating screen, a screw feeder, a high-pressure air supply (to provide mechanical turbulence between soil and washing solution), and a ceramic filter. The mass of soil treated with individual washing solutions (HCl, H2SO4, or H3PO4) in this mobile system was 40 kg[11]. Many environmental companies offer soil washing systems. Global leaders in the field of large-scale washing of soils are Boskalis Environmental[12] and ART Engineering LLC[13].