Recent studies indicate the existence of a maternal-autoantibody-related subtype of autism spectrum disorder (ASD). To date, a large number of studies have focused on describing patterns of brain-reactive serum antibodies in maternal-autoantibody-related (MAR) autism and some have described attempts to define the antigenic targets. This entry describes evidence on MAR autism and the various autoantibodies that have been implicated. Among other possibilities, antibodies to neuronal surface protein Contactin Associated Protein 2 (CASPR2) have been found more frequently in mothers of children with neurodevelopmental disorders or autism, and two independent experimental studies have shown pathogenicity in mice. The N-methyl-D-aspartate receptor (NMDAR) is another possible target for maternal antibodies as demonstrated in mice. Here, we discuss the growing evidence, discuss issues regarding biomarker definition, and summarise the therapeutic approaches that might be used to reduce or prevent the transfer of pathogenic maternal antibodies.

Early research in this area was closely followed by several critical studies in the description of maternal-autoantibody-related (MAR) autism, a sub-type of ASD in which autoantibodies reactive to foetal brain proteins are present in the maternal serum (Tables 1 and 2).

Table 1. Summary of studies associating maternal antibodies with neurodevelopmental disorder in the child.

Tables 1 and 2 provide a comprehensive summary of the studies on MAR autism to date. A combination of associative human studies and passive transfer and immunisation studies in animals provides convincing proof of the concept of MAR autism.

Table 1 describes 13 studies that have associated patterns of maternal serum reactivity with an outcome of ASD or other neurodevelopmental disorder in the child. The first study to indicate a possible association between maternal antibodies and autism was carried out by Warren et al. (1990)[1], who demonstrated that plasma from six of eleven mothers of an autistic child had antibodies reactive to lymphocytes of the child. Considering the substantial cross-reactivity between lymphocyte and neuronal antigens, this study prompted further investigation into the concept of MAR autism.

In the mid-1990s came two case studies on autoantibody-related neurodevelopmental disorder. Barnes et al. (1995)[2] described a mother whose four pregnancies were affected by foetal arthrogryposis multiplex congenita (AMC), a rare condition characterised by multiple joint contractures, caused by lack of foetal movement in utero, and previously associated with maternal myasthenia gravis (MG). The mother had a history of shoulder and facial muscle weakness, but MG was not diagnosed until after her fourth pregnancy, when she had highly positive serum acetylcholine receptor (AChR) antibodies. Vincent et al. (1995)[3] described a second mother who, despite remaining healthy herself, had six consecutive pregnancies affected by AMC. Serum taken before the sixth pregnancy contained a high titre of AChR antibodies. Foetal movements were initially normal until 15–18 weeks, but repeated plasma exchange from 10 weeks gestation prolonged foetal movements, indicating that onset/progression of AMC could be delayed. This implicated maternal factors over a genetic cause in the pathogenesis. Furthermore, a maternal-autoantibody-mediated cause of AMC was heavily suggested by the recurrence of AMC in all pregnancies (both studies) and the fact that foetal movements were observed until 15–18 weeks, the time at which foetal immunoglobulin G (IgG) levels begin to rise rapidly. This hypothesis was strengthened by demonstration that the maternal serum antibodies selectively inhibited the foetal form of AChR (Riemersma et al., 1997)[4], making this the first study to implicate clearly maternal autoantibodies as a cause of a neurodevelopmental disorder and catalysing further research into this novel field. Witebsky’s postulates for antibody-mediated disorders, as modified by Rose and Bona[35], rely on transfer of disease to an experimental model (as well as transfer of disease from mother to her offspring). To establish an animal model, Jacobson et al. (1999)[15] injected pregnant mouse dams with plasma from four AChR antibody-positive women whose foetuses were affected with severe AMC. Many of the foetuses displayed fixed joint contractures and other deformities resembling AMC. This passive transfer animal model has since been used repeatedly to study the effects of ASD-salient maternal antibodies on foetal development (Table 2).

The first such study looking at autism was done by Dalton et al. (2003)[16] who injected pregnant mouse dams with plasma from a mother who had three surviving children: One typically developing, one with autism and one with a specific language disorder. The mother’s serum contained antibodies that bound to rodent Purkinje cells and to the surface of a neuroblastoma cell line, suggesting a potentially pathogenic neuronal antibody. Compared to controls, the mouse offspring displayed a delayed righting reflex, decreased exploration and decreased ability to balance on the multiple static rods test. While these behavioural measures were far from specific to autism, the reduced exploratory behaviour echoed the characteristic RRBIs seen in autism, and the reduced balancing and changed cerebellar metabolites indicated possible cerebellar dysfunction which has been implicated in the pathophysiology of autism[36]. A strength of this study was its tightly controlled diagnostic criteria for psychiatric disorder; their diagnoses were based on independent clinical assessments by three paediatric specialists. Thus, Dalton et al. were the first to provide causative evidence that maternal factor can induce neurodevelopmental disorder, and with particular direction towards autism.

The story of MAR autism grew significantly from 2007 onwards when a number of studies linked autism with maternal serum reactivity[17][11][5][6]. Western blots of mammalian brain extracts were used as the method of antibody detection in these studies and protein bands were identified by maternal serum IgG in cases but not in controls. Others studied the reactivity of plasma from mothers of an autistic child using mouse brain sections and observed an increased prevalence of anti-brain reactivity in the 10.5% of 2431 cases compared with 2.6% of 653 controls[7]. While the plasma samples used were not mid-gestational, these studies support the existence of MAR autism. However, the method used did not identify specific antigenic targets or identify whether they were intracellular rather than membrane proteins.

Table 2 lists several passive transfer animal studies that have aimed at establishing causative evidence for the association between autism and maternal serum reactivity. Martin et al. (2008)[17] advanced on previous work with the first IgG passive transfer model, in which purified pooled IgG, rather than whole plasma, from mothers of autistic children produced stereotypies and hyperactivity in rhesus macaques. The demonstration of these changes in a primate model makes this particularly compelling evidence. A limitation common to most of the studies listed in Tables 1 and 2, however, was the use of maternal plasma samples collected several years after the children’s birth[1][16][17][11][5][6][7][8][9][20][10][12][19][14], by which time maternal antibody profiles might have changed. Nevertheless, with repetition across studies and in large cohorts the overall significance of this limitation is reduced. Furthermore, a study by Croen et al. was successful in confirming mid-gestational presence of antibodies to an autism-specific pattern of intracellular antigens[5].

The animal studies summarised in Table 2 have helped to strengthen the story of MAR autism. However, it is important to keep in mind the difficulty of comparing animal and human behaviours. It is possible that some or all of the maternal antibodies identified are mediators not specifically of autism but of neurodevelopmental disorder more generally. This issue is further complicated by changes in autism diagnosis over the past 30 years. Baird et al. (2006)[37] described a disparity between the recorded prevalence of childhood autism in South Thames, UK (38.9 per 10,000) and the prevalence measured using a narrower definition which combined clinical consensus with instrument criteria for past and current presentation (24.8 per 10,000). Research subject selection in many of the studies in Table 1, including Brimberg et al. (2013)[11], appear to have been based on the wider definition, meaning there might be inconsistencies depending on where and when the cohorts were recruited and when studied. This could be an explanation for some conflicting results discussed later in this article concerning CASPR2 antibodies (CASPR2-Abs). A simple schema of the placental transfer, the antigenic targets, and possible treatment approaches is shown in Figure 1. 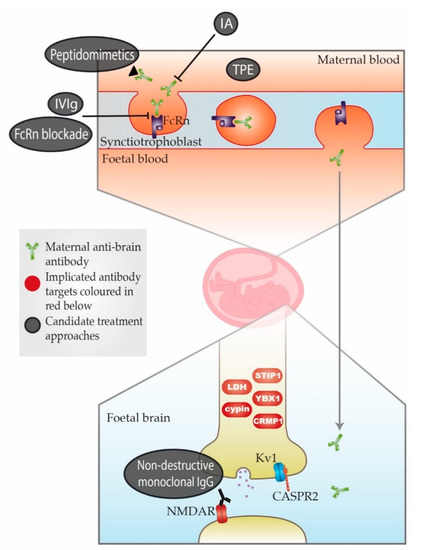 Anonymous
08 Apr 02:06:47
0
Congratulations on this review and discussion