Plasmonic photocatalysts, noble-metal (NM)-modified wide-bandgap semiconductors with activity under visible-light (vis) irradiation, due to localized surface plasmon resonance (LSPR), have been intensively investigated over the last few years as efficient materials for environmental purification and energy conversion. However, the low quantum yields of photocatalytic reactions under vis irradiation, resulting from fast charge carriers' recombination, must be overcome for possible commercialization. Accordingly, the morphology design of plasmonic photocatalysts for efficient light harvesting has been proposed by using wide-bandgap semiconductors in the form of photonic crystals (PCs). 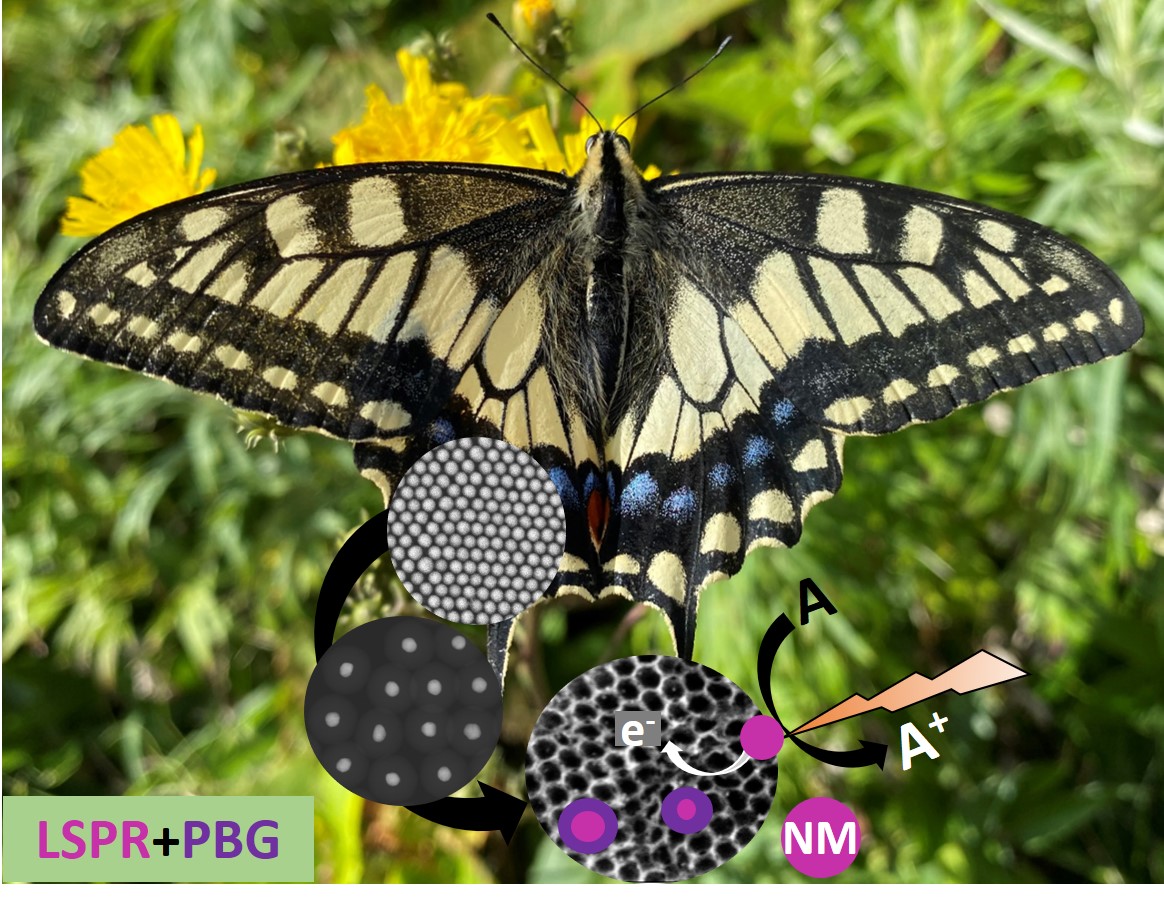 Noble metal (NM)-modified wide-bandgap semiconductors with activity under vis irradiation, due to localized surface plasmon resonance (LSPR), known as plasmonic photocatalysts, have been intensively studied over the last few years [1][2][3][4][5]. Despite the novelty of the topic, a large number of reports have already been published, discussing the optimal properties, synthesis methods and mechanism clarification. It has been proposed that both efficient light harvesting and charge carriers’ migration are detrimental for high and stable activity under vis irradiation. Accordingly, photonic crystals (PCs) with photonic bandgap (PBG) and slow photon effects seem to be highly attractive for efficient use of incident photons.

Although, a large number of studies on plasmonic photocatalysis has been published, only few reports might be found on PCs-based plasmonic photocatalysis. NM-modified PCs have been used in the photocatalysis field, due to few advantages, as follows: (i) the absorption at Vis-NIR as most of the wide-bandgap semiconductors are unable to absorb light at those regions, (ii) slow photons arising from PBG/photonic effect owning to the PCs, which might enhance and strengthen the LSPR effect, and (iii) the role of NMNPs as an electron sink, which reduces the charge carriers’ recombination. Although the inhibition of recombination should not be considered as plasmonic photocatalysis, various reports point this feature, which surely might enhance the overall activity under solar radiation, i.e., at UV-Vis range.

However, the aspect mentioned at (ii) should be only expected if LSPR matches with the slow photons effect, which could be realized by the perfect tuning in the fabrication process. Indeed, even a decrease in the photocatalytic activity of TiO2-coated nanoporous alumina inverse opal (IO) has been observed after deposition of Au NPs or Ag NPs on its surface, where both effects do not match, i.e., LSPR at ca. 400–550 nm and PBG at ca. 800 nm [6]. In contrast, Lu et al. have succeeded the precise tuning in fabrication of Au-NP/TiO2 PC with LSPR overlapping with the blue edge of PBG, resulting in 2.3-fold higher photocatalytic efficiency for photodegradation of 2,4-dichlorophenol in comparison to the reference Au-NP/nanocrystalline TiO2 under visible-light irradiation [7]. Similarly, Zhang et al. [8] have shown the enhanced photoelectrochemical (PEC) water splitting by using the Au-NP-modified TiO2 nanorod array structure (Au/TiO2 NRPCs) by overlapping of LSPR with red edge of PBG effect, utilizing the slow photons (max at ca. 518 nm). Additionally, both studies [7][8] have indicated that red-edge PBG is more effective than blue-edge one. At the red-edge PBG, the light propagate with decrease group velocity, being described as a sinusoidal standing wave that has its highest amplitude in the high refractive index part of the PCs, whereas the standing wave at blue edge is localized in the low-refractive index part. Accordingly, an absorber at high dielectric part has stronger interactions with light at red-edge regions of PBG. Similarly, IO-molybdenum: bismuth vanadium (Mo:BiVO4) photoelectrode with infiltrated Au NPs has shown an increase in PEC water splitting, and the enhancement has been attributed to the amplified LSPR effect when the polystyrene (PS) template of 260-nm particles results in PBG at 513 nm, synergistically matching with the LSPR of Au [9].

An important aspect that should be considered for 3D powdered PC-based plasmonic photocatalysts is the periodical/structural integrity as disordered structure could affect the enhancement of the visible-light harvesting, thus reducing the photocatalytic performance. Indeed, the crushed Au/TiO2 biomorphic (BM)PCs have exhibited lower photodegradation efficiency as compared with uncrushed ones [10]. Similarly, C. Dinh et al. have shown that the crushed Au/TiO2-3D hollow nanospheres (HNSs) show about 4.3-fold lower efficiency of CO2 generation from photodecomposition of isopropanol as compared with an original Au/TiO2-3DHNS, indicating the probability of a decrease in photoabsorption ability by Au, due to the structure disruption [11]. It should be pointed out that although the partial crushing of IO structure results in a decrease in the activity in both studies, those activities have been much higher than that by a reference sample of commercial titania modified with Au NPs (Au/TiO2-P25), highlighting the synergism between the periodic porous structure (although slightly destroyed) and plasmonic effect.

NMNPs are known for their ability to inhibit the recombination of charge carriers, by trapping electrons (as already discussed in Introduction). It should be underlined that this effect could not be described as plasmonic photocatalysis since the semiconductor is excited, but not NM. Accordingly, NMNPs, such as Pt, Au, and Ag have been infiltrated/incorporated on PCs to enhance the photocatalytic activity [12][13]. For example, Huo et al. have shown a facile preparation method of NM-modified PCs by incorporation of Pt NPs and reduced graphene oxide (r-GO) on TiO2 IO macroporous structure, highlighting the enhanced photodegradation of methyl orange [9]. However, it should be pointed out that this study could not be considered as plasmonic photocatalysis as TiO2 instead of NM is excited. In contrast, Temerov et al. have discussed the enhanced mineralization of acetylene to CO2 on TiO2-IO modified with Au NPs and Ag NPs (by 53% and 39%, respectively), owning to the LSPR activation (plasmonic photocatalysis), i.e., electron transfer from NM to TiO2 with simultaneous oxidation of acetylene on the NM surface, but irradiation has been performed with UVA, and thus TiO2 excitation must also be considered [11].

Interestingly, plasmonic photocatalysis using both functions of NMs, i.e., plasmonic excitation and inhibition of charge carriers’ recombination, has been proposed by Rahul et al. for bi-metal-modified TiO2-IO co-doped with N/F [14]. The LSPR excitation of Au results in an electron transfer from Au to CB of TiO2, and then to co-deposited Pt NPs, on which H2 evolution takes place. It should be pointed out that co-catalyst is necessary for efficient H2 evolution on titania, and Pt is probably the most active co-catalyst for this reaction [15][16].

In the case of NM deposition on the PCs, the amount of NM is critical for the enhancement of the photocatalytic activity. For example, 2 wt.% of Pt loading on TiO2-IO PC has been shown as the best, whereas 1.3 wt.% is not able to exhibit any amplification in the dye photodegradation [17]. Similarly, it has been shown that the lowest (2 mM) and the highest (20 mM) amount of deposited Ag (in terms of precursor concentration) on TiO2 PC is not able to amplify the light absorption as the former is inadequate to exhibit LSPR and the latter results in Ag NPs’ aggregation, diminishing the activity [12]. An interesting study has been shown for the correlation between Ag-NP deposition duration (15, 30, 45, and 60 s) by pulse current deposition on TiO2-IO and the photocatalytic activity [18]. Longer deposition duration has resulted in the formation of Ag aggregates, which directly affects the MB photodegradation efficiency, due to the loss of LSPR effect (the aggregation) and blockage of the charge carriers’ migration. Similarly, S. Zhang et al. have shown that the number of deposition cycles of Cu NPs on TiO2 nanotube arrays (TNTs) affects the efficiency of photocatalytic water splitting, and 20 cycles results in 10.7-fold higher evolution of H2 as compared to the reference sample (without Cu), due to the amplified plasmonic excitation [16]. Although further increase in deposition cycles (>20) has reduced the photocatalytic activity (non-clarified reason), the efficiency has been much higher than that by non-modified TNTs.

Plasmonic photocatalysis is probably one of the hottest topics in heterogenous photocatalysis research because of possible applications under broad wavelength ranges (UV/vis/NIR). Although, the research is quite new, there many reports on preparation, characterization, activity and stability enhancement, mechanism clarifications, including various applications, e.g., solar energy conversion, degradation of chemical and microbiological pollutants and CO2 conversion. The critical for the overall activity is low quantum yields of photocatalytic reactions under visible-light irradiation. Accordingly, enhanced light harvesting is highly important for the activity enhancement. PCs seem to be the best materials for efficient light utilization. However, it should be pointed out that PBG and slow photon effects at vis/NIR range of solar radiation should not be able to excite wide-bandgap semiconductors, due to insufficient energy. Although, some reports show photocatalytic activity of bare TiO2 IO structures, those studies have been mainly performed for dyes, resulting in titania sensitization by dyes. However, PCs-based plasmonic photocatalysts due to LSPR absorption have been promising candidates for high photocatalytic performance. Accordingly, such photocatalysts have been synthesized, characterized and tested. However, the preparation of both PCs and PCs-based plasmonic photocatalysts is quite challenging, involving multi-step procedures.

It has been proposed that precise and fine tuning of photoabsorption properties, i.e., PBG matching with LSPR by nanoarchitecture of PCs void diameter and NMNPs size, respectively, is the most important aspect for the PCs-based plasmonic photocatalysts. It should be pointed out that the content of NM and structure configuration might be also a key-factor for photocatalytic activity. For example, too low content of NMs result in low LSPR, whereas too large content might cause NPs aggregation. The deposition of NMs on the surface of IO might also block the light (screening effect). Accordingly, it is proposed that the preparation of PCs with NM deposited in voids would be the most recommended for efficient light harvesting, and thus the overall photocatalytic effect.