Melanogenesis is the biological and biochemical process of melanin and melanosome biosynthesis. Melanin is formed by enzymic reactions of tyrosinase family proteins that convert tyrosine to form brown-black eumelanin and yellow-red pheomelanin within melanosomal compartments in melanocytes, following the cascades of events interacting with a series of autocrine and paracrine signals. Fully melanized melanosomes are delivered to keratinocytes of the skin and hair. In humans, eumelanin and pheomelanin are mixed together regardless of the pigmentary phenotype. The ratio of the two melanin pigments is determined by race and/or specific genetic variations. On the other hand, many mammals have various patterns of hair coat color that can be changed temporally. Wild type mice have agouti pattern hair caused by a mechanism, called pigment-type switching.

Melanin determines colors of our skin, eyes, and hair and protects the skin from sunlight exposure. Melanin is a biopolymer synthesized within pigment cells, melanocytes, and packaged in the specialized lysosome-related organelles called melanosomes. The biological and biochemical pathway of melanin biosynthesis is known as melanogenesis. Melanogenesis is an enzymatic reaction in which melanin-forming tyrosinase family proteins convert an amino acid, tyrosine, to form brown-black eumelanin and yellow-red pheomelanin in melanocytes [1]. Melanogenesis involves a series of paracrine and autocrine signals, beginning with activation of the cyclic adenosine monophosphate (cAMP)/cAMP response element-binding protein (CREB)-signaling pathway in melanocytes, mainly by a G-protein-coupled receptor, melanocortin 1 receptor (MC1R) in response to its ligands, mainly alpha-melanocyte-stimulating hormone (α-MSH). Activated MC1R increases intracellular cAMP, which in turn activates CREB and eventually stimulates transcription of microphthalmia-associated transcription factor (MITF), a master transcription factor of melanocyte development and differentiation. MITF activates expression of key melanin-forming genes including genes for tyrosinase family enzymes and the melanosomal structural matrix protein PMEL. MC1R loss-of-function variants result in fair-colored skin and hair [2].

Neural crest cells are migratory multipotent cells derived from the dorsal neural tube during embryonic development that give rise to neurons, glial cells, bone and cartilage cells, and melanocytes. The “classic” melanocyte precursors, melanoblasts, migrate in the dorsolateral pathway to reach the basal layer of epidermis and hair follicles [3]. Multipotent Schwann cell precursors are also a source of melanocytes. Schwann cell precursors produce the majority of body and extremity melanocytes [4], while both “classic” melanocyte precursors and Schwann cell precursors produce cranial melanocytes [5]. Apart from the skin and hair, melanocytes exist in the eye, inner ear, and internal organs such as lung, heart, and aorta. Coat color mutants in mice and other species (e.g., Kit, Ednrb, and Edn3) led researchers to identify genes involved in melanocyte development [6][7][8]. Melanocyte stem cells localize in the bulge region of hair follicles and produce epidermal and hair follicle melanocytes [9]. Reactive oxygen species induced by genotoxic stresses and pain-induced adrenaline cause hair graying by making melanocyte stem cells differentiate [10][11][12].

Melanosomes have four maturation stages characterized by unique shapes and amounts of melanin pigments. In stage I, the melanosome structure is similar to the vacuolar domain of early/late endosomes, presenting as intralumenal vesicles with the deposition of fibrils composed predominantly of the pigment cell-specific protein PMEL (also known as the silver locus product, PMel17), an integral membrane protein [13][14][15]. In stage II, the ellipsoidal form of melanosomes is morphologically changed due to reorganization of the fibrils after cleavage of PMEL and release of the Mα moiety, which is formed from the Mβ membrane fragment. Stage I and stage II melanosomes are called premelanosomes, which lack deposits of melanin; it is deposited in PMEL fibrils of stage III melanosomes. Fully melanized melanosomes are the characteristic of stage IV. During stages II to IV, melanogenesis proteins including tyrosinase, TYRP1, and TYRP2/DCT are delivered to melanosomes [16][17][18] (Figure 1). 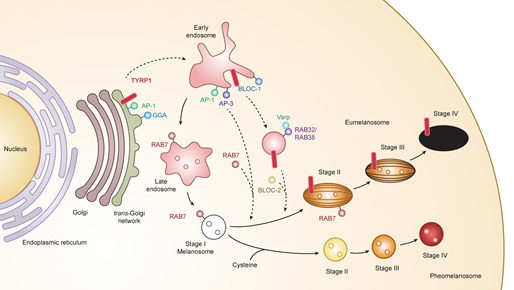 Figure 1. Melanogenesis and intracellular trafficking for melanosome biosynthesis. MITF turns on melanogenesis by activating transcription of pigment genes such as TYR, TYRP1, DCT, and PMEL which are transported from the trans-Golgi network and incorporated into early/late endosomal compartment to form melanosomes. Melanosomes have four maturation stages characterized by unique shapes and amounts of melanin pigments, i.e., eumelanin and pheomelanin. In the case of TYRP1, AP-1 and GGA play key roles in the sorting process of export from trans-Golgi network via early/late endosomes to stage I melanosomes by two other mechanisms: (i) BLOC-1/RAB32/RAB38/Varp/BLOC-2; (ii) AP-1 or AP-3. RAB7 is required for the stage I melanosome formation and the TYRP1 sorting from early/late endosomes to stage I melanosomes. Abbreviations: AP, adaptor protein; BLOC, biogenesis of lysosome-related organelles complex; GGA, Golgi-localized γ-ear-containing ADP-ribosylation factor-binding protein.

The two types of melanin pigment, brown-black eumelanin and yellow-red pheomelanin, are produced exclusively by melanocytes and are mixed together regardless of the pigmentary phenotype in humans [19]. The ratio of the two melanin pigments within the melanosome is determined by race and/or specific genetic variations [20]. Black, brown, light brown, and blond hairs differ only in their eumelanin content, while red hair is exceptional in that it contains pheomelanin fourfold greater than light brown and blond hairs [21]. Variations in pigmentation derive mostly from diﬀerences in the relative amount of total melanin pigment rather than from the relative ratio of eumelanin and pheomelanin. The basal composition of the mixed eu- and pheo-melanin in an individual does not change dramatically, though external stimuli to melanocytes such as UV irradiation can affect the ratio and content of eumelanin and pheomelanin [21].

On the other hand, many mammals have various patterns of hair coat color that can be changed temporally. Expression of the wild type Agouti gene in mice results in hair with a characteristic color pattern: subapical yellow bands in an otherwise black coat [22]. This black-yellow-black pattern results from a rapid change of melanin synthesis in hair bulb melanocytes, called pigment-type switching. In the beginning of the hair cycle (days 0–4), all hair bulb melanocytes synthesize eumelanin. During days 4–6, they produce pheomelanin in response to agouti stimuli from dermal papilla cells, followed by more eumelanin synthesis. Major regulators of pigment-type switching are the MC1R and agouti proteins. Other modulatory factors such as ATRN and MGRN1 are also involved in this process [23][24](Table 1).