A wide range of studies have been performed in the field of the usage of biomass for energy production, in order to contribute to the green transition from fossil fuels to renewable energies. Over the past 20 years (from 2000 to 2019), approximately 10,000 articles have been published in the “Agricultural and Biological Sciences” field on this theme, covering all stages of production—from the harvesting of crops to the particular type of energy produced. Articles were obtained from the SCOPUS database and examined with a text mining tool in order to analyze publication trends over the last two decades. Publications per year in the bioenergy theme have grown from 91 in 2000 to 773 in 2019. In particular the analyses showed how environmental aspects have increased their importance (from 7.3% to 11.8%), along with studies related to crop conditions (from 10.4% to 18.6%). Regarding the use of energy produced, growing trends were recognized for the impact of biofuels (mentions moved from 0.14 times per article in 2000 to 0.38 in 2019) and biogases (from 0.14 to 0.42 mentions).

Bioenergy is renewable energy derived from the treatment of several types of organic sources, which are generically named biomass [1][2]. Biomass is biological material derived, either directly or indirectly, from the transformation of solar energy into chemical energy [3]. It may be constituted of wood, forestry waste, crop residues, manure, urban waste, food industry residues, and the many by-products of agricultural processes [4][5][6][7]. International organizations and national governments are increasingly committed to pursuing environmental sustainability policies, setting even more ambitious targets for reducing pollution and the impact of human activities [8][9].

Due to the vastness and the importance of the topic, the analysis was carried out using a [10]: (i) Inter-disciplinary, studying the topic from a general point of view; (ii) clearly communicating the state-of-the-art and the research gaps; and (iii) supporting the study and work of the researchers and stakeholders. The aim of the present analysis is to provide a comprehensive review of the state-of-the-art of the literature concerning bioenergy in Agriculture and Biological Sciences field. The specific objectives of this work are: (i) Describe the temporal trend of publications over the years; (ii) identify in which field the research has been mainly directed; and (iii) analyze the most important links between topics. A quantitative analysis represents the most effective methodology to perform the above-mentioned objectives.

2.1. Analysis of the Trends

The variations in the number of articles depend both on the increase in the interest of the researchers on the subject and on the overall growth in publications. Interestingly, the Kyoto Protocol entered into force on 16 February 2005, so it is conceivable that it influenced the interests of researchers, encouraging them to find solutions to reduce CO2 emissions, in order to comply with the agreement.

A further incentive may have been given by the 2009 United Nations Climate Change Conference (commonly known as the Copenhagen Summit) for climate change mitigation. Following this pattern, a slowdown starting from 2016 can be noted. The Paris Agreement in 2015 seems not have made a substantial contribution to research in the renewable energy sector. A confirmation of this trend came by comparing the publications with the term Bioenergy with the total publications on SCOPUS in the same period. Figure 1 shows that the total number of publications has a steady but slower growth than publications with the bioenergy theme.

The first 100 terms among the pre-processed ones were grouped into five conceptual clusters. The weight of a cluster was determined by the sum of the weights of the terms that belong to it. This weight was calculated using the ratio between the occurrences of the terms in a given year and the total articles in the Bioenergy topic in the same year.

The broader cluster was that with the theme “Biomass”, which included all words regarding the possible sources of biomass and their characteristics (e.g., “protein”, “nitrogen”, “organic”, “feedstock”, and so on). The most important sources of biomass in the cluster were, in descending order: food (8.2%), fish (7.7%), forest (6.0%), wood (4.6%), animal (3.3%), switchgrass (3.1%), agricultural (3.0%), and miscanthus (2.9%). Other significant clusters were Energy (24.6%) and Process (23%), as shown in Table 1. The cluster “Energy” included the terms and the concepts linked to the step of energy production, while the cluster “Process” considered the phase of treatment of the biomass resources, including the economic and management aspects. Features regarding production and resource conditions were included in the cluster “Field”, while environmental and sustainability concepts were listed in the “Environment” cluster. 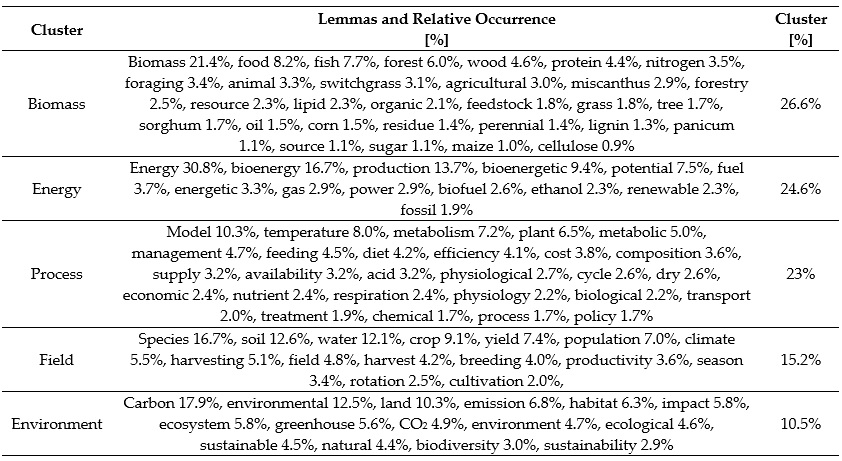 By the results of the analysis, production and treatment were the sectors in which researchers have mainly focused during the last 20 years. Considering the selected words, the sources of biomass (i.e., food, fish, wood, switchgrass, miscanthus, grass, sorghum, oil, corn, residue, panicum and maize) occupied about 37.7% of the occurrences. The terms “emission” and “greenhouse” (mainly related to the greenhouse gases) influenced the cluster for about 12.3%. In the cluster “Energy”, specific terms such as “fuel” and “biofuel” presented an impact of 6.3%; meanwhile, other topics such as “electricity” and “biogas” were not even among the most frequent words.

In the “Process” cluster, an important contribution was given by terms relating to chemical and biological aspects: temperature (8.0%), metabolism (7.2%), metabolic (5.0%), feeding (4.5%), diet (4.2%), composition (3.6%), physiological (2.7%), nutrient (2.4%), respiration (2.4%), physiology (2.2%), biological (2.2%), treatment (1.9%), and chemical (1.7%). It is worth noting that some of these terms are important parameters in the production process of biofuels and biogas: the same process is also deeply influenced by the specific implemented crops, which; however, were included in the generic “biomass” cluster for the diverse meaning and use they might have in research papers. The residual contribution consisted of technical and economic terms. The “Field” cluster was made up of terms with fewer occurrences than the others, but it indicated that there was interest in the biomass production aspects. The environmental issue seems to have had minor importance (10.5% of the total), which is likely to tend to increase in the coming years.

The percentage of occurrences of the clusters per number of articles in the bioenergy field were compared. Observing the trends over the last 20 years (Table 2), it is noteworthy to observe that the percentage weight of the “Process” cluster has steadily decreased, from 26.5% to 21.0%. The “Energy” cluster has suffered a comparable, but less accentuated, reduction—from 25.8% to 21.5%. Both the “Field” and “Environment” clusters have been continuously growing; the cluster “Field” from 10.4% to 18.6% (therefore, an increase of about 79%), and “Environment” from 7.3% (the 2001 value was taken, as that in 2000 seemed to be out of scale) to 11.8% (therefore, increasing by 62.3%). It appears that environmental and sustainability issues have been of increasing interest in research, a consequence of the ecological policies promoted by national governments and international institutions.

Table 2. Percentage of occurrences in the clusters aggregated by groups of five years.

To describe the evolution of research publications in the bioenergy sector, groups of words with very particular bonds were taken. These groups were constituted by terms that expressed alternative solutions in the study and, by analysing the variations with which these solutions are cited in the articles, it is possible to understand in which direction the research was addressed.

The first specific cluster considered was related to “Crops” (Figure 2), which included potential biomass sources from agricultural activities. Considering the trend over the last 20 years, a temporal analysis allowed us to identify if there were crops that have gained interest as sources of biomass for energy purposes and if there were others that, on the contrary, are considered less valid at present than in the past.

Figure 2. Trend chart of related terms in the “Crops” cluster.

The first general consideration was that citations of crops per article in the bioenergy theme have generally grown over the considered period. In other words, a growing attention has been paid to the selection of specific or alternative crops as potential source for bioenergy production. Above all, Miscanthus has showing the largest evolution, moving from 0 to 0.584 occurrences per article (occ/art), which signifies that there were about 0.58 citations of the term per each article considered to fall under the bioenergy theme. One other significant result is the trend exhibited by the term “sugarcane”, the ratio of which increased from 0 to 0.306 occ/art; a result that is particularly important, considering that the production of this product is mainly concentrated in developing countries. The term switchgrass was the most cited for several years (from 0.187 to 0.282 occ/art), although it registered some deep falls. Some types of crops have shown growth over time, albeit with fluctuating trends such as grass (from 0.044 to 0.221 occ/art), corn (from 0.033 to 0.202 occ/art), sorghum (from 0 to 0.195 occ/art), or algae (from 0.099 to 0.256 occ/art); trends and applications of algae were studied by Deviram et al. [11] and by Yang et al. [12], showing growing interest in recent years, particularly in the USA and China. Some other crops have given evidence of an initial interest, but with a loss of relevance in the last years, as in the case of wheat or thale cress (Arabidopsis). Other crops (including Arundo, Beets) have been taken into consideration; however, they still play a weak role in research publications.

The second specific considered cluster was related to “Energy produced” (Figure 3), which included the energy forms that can be obtained using biomass. The relevance of the argument and the benefits and costs associated with each type of utilizations was studied by Guo et al., expecting a growing of the sector in the next future, in particular bioethanol and biogas [13]. This type of analysis makes it possible to understand which kind of produced energy the publications focused on, assessing whether politics or international agreements have had an influence on the research. The occurrences of the terms “heat” and “electricity” were almost constant over the two considered decades. Excluding the first three years, which exhibited an anomalous peak, occurrences of the term “heat” moved from 0.155 to 0.145 occ/art, while the citations of the term “electricity” moved from 0.130 to 0.102 occ/art.

The slow but steady growth of the other terms related to biogases and biofuels is significant. Indeed, in the first case citations increased from 0.143 to 0.414 occ/art (i.e., with an average increase of 9.5% per year), while in the second case the number of occurrences per article moved from 0.143 to 0.378. For biofuels, a more evident growth can be recognized between 2007 and 2011 (+0.404) occ/art: Such increment might be associated to the increasing impact on economy of crude oil prices (which reached a maximum in July 2008), along with international and in particular European strategies for biofuels, published in 2006 [14].

The last twenty years have seen a growing attention on bioresources for energy applications. In particular, renewed interests have been devoted to specific and different topics in the wide research field of bioenergy science. The present research is aimed at characterizing such evolving trends, highlighting most relevant terms or relations in terms of occurrences in scientific papers.

The most important contributions are concentrated in three macro areas: North America, Western Europe, and China, while the developing countries are actually less represented. Such distribution suggests that political decisions and favorable economic conditions deeply influenced the interest in the topic. As for the contributions of the top five countries, the United States is the most significant contributor for every type of biomass, but it is interesting to note that publications are mainly focused on switchgrass. Considering also data related to rice in China, wheat in Canada, and maize in Germany, it seems that the attention of the research is mainly focused on those crops that are particularly common in the country. Articles with UK affiliation are particularly targeted at miscanthus; the interest in this energy crop indicates the objective of seeking solutions not in competition with food production. Additionally, the results of the review suggest that efforts in the future might be focused both on the biomass production phase and in the analysis of the environmental impacts and benefits, which up to now (compared to process, biomass and energy clusters) have exhibited the lowest percentage of occurrences but on the other hand the highest growth rate.