Nanofluids are advanced category of fluids that are formed by dispersing nano scaled particles within non-dissolving conventional fluids. What makes such suspensions favourable to many thermal applications is that the developed thermal property of the fabricated fluid becomes somewhere within the range of that of the added solid particles and that of the conventional basefluid used. Nevertheless, the main challenges that faces the commercialization of such class of fluids are: 1- maintaining the physical stability of the dispersion, which otherwise can leads to a degradation in the effective thermophysical properties with time; and 2- the accompanied increase in effective viscosity of the mixture that generally cause the pressure losses in the system to increase, and hence the pumping power demands rises accordingly.

Depletable sources of fossil fuel such as crude oil, natural gas, and coal supply about 85% of the total global energy demands [1]. This percentage of energy consumption is expected to rise in the upcoming years, where according to the latest statistics on energy production and consumption, the worldwide total energy demand will increase by approximately 20% more by the year 2040 [2]. The majority of this energy is used to supply electricity and/or for the water desalination process. In the worldwide power generation market, gas turbines are becoming the preferred method for fulfilling most countries’ energy needs. This is because the technology itself has become mature enough and reliable for use, requires relatively short installation time, has a high cycle efficiency, relatively low operational and maintenance cost, and produces less CO2 and NOx emissions compared to other power generating systems [3][4]. Furthermore, the advances in Brayton cycle configurations have resulted in the widening of the range of possible applications, so today gas turbines can be seen employed in power plants, aviation, and marine propulsion. Gas turbines operate on the thermodynamic basis of the Brayton cycle, where it can be divided into two main categories, namely the open and the closed cycles. The major difference between the two is that in the open-cycle the working fluid (air) needs to be replaced with each complete cycle, whereas in the closed cycle, the heat transfer fluid (e.g., air or other gaseous fluid) is continuously reused. Thus, the closed cycle is seen as more cost-effective than the open system due to it requiring less fuel consumption while providing higher thermal transport efficiency [3][5]. Nevertheless, for propulsion applications (e.g., aircraft), open-cycle gas turbines are preferable because of their small construction scale, ease of load control, and higher turbine inlet temperature [6][7]. One of the key components that intensively influences the closed-cycle performance is the heat exchanger (HE), as it transports the required heat from a thermal source (e.g., solar, nuclear, or fossil) to the gas turbine cycle. In advanced closed-cycle system, reheaters, recuperators, and intercoolers, which are forms of HEs, are occasionally used to enhance thermal efficiency. Despite the achievements that started in 1935, when the closed-cycle gas turbine was first patented by Keller and Ackeret [5], researchers have come to a point where limited improvement in the cycle performance can be accomplished via modifying the design set-up, using different forms of heat exchanging devices, or adding turbulators to promote heat exchange [8][9]. Hence, they have concluded that to surpass the current limitations, an advanced type or category of heat transfer fluid needs to be employed [10]. This is when nanofluids, which were discovered in 1993 by Masuda et al. [11] and named by Choi and Eastman in 1995 [12], were seen as one of the primary solutions for overcoming the aforementioned cycle improvement limitations. The primary advantage of using nanofluids as working fluids, is that they exhibit significantly enhanced heat transfer characteristics when compared to their conventional counterparts [13][14].

A nanofluid is a suspension fabricated through homogenously dispersing nanoparticles (preferably <100 nm particle size and ≤1 vol. %) in a non-dissolving basefluid [15]. The particles themselves can be of pure metals, metallic oxides, carbides, carbon-based materials, alloys, or elemental compounds, whereas the hosting basefluids are usually made of any non-dissolving liquid such as water, ethanol, ethylene glycol (EG), oil, refrigerants, or a mixture made of two or more fluids [16]. Furthermore, the thermophysical properties (also referred to as the effective parameters) of the colloid greatly depends on the following points:

As such, it is crucial to carefully consider the previously mentioned points for each given heat transfer system to optimize its performance efficiency (i.e., power requirements and thermal transport). One of the common ways of doing this is by numerically analyzing the testing scenarios before actually conducting the experiments [17][18][19][20][21][22][23]. A measure of the relevance of the use of nanofluids as working media in HEs can be obtained from a survey of published works, according to the Elsevier’s abstract and citation database, Scopus, there are 2373 documents in total published between 1996 and 2020 [24]. Of these publications, 94.61% were published between the years 2009 and 2019 as illustrated in Figure 1.

Figure 1. Data obtained from the Scopus database for the words ‘Heat exchanger’ and ‘Nanofluid’ from 2009 to 2019, where (a) shows the number of publications per year, and (b) demonstrates the type and percentage of these publications.

It is important to note that the data from Scopus were obtained by first screening the database for the words ‘Heat exchangers’, then the results were further refined to include the word ‘Nanofluid’ in the title, abstract, and/or keywords. Furthermore, investigating the reduction in the number of publications between the years 2011 to 2013, the authors have found that during the aforementioned period, researchers have focused essentially on improving the HE designs and the use of renewable sources for providing thermal energy to the system (e.g., solar or biomass). Additionally, the employment of nanofluids has extended beyond that of HEs to applications such as air purification systems [25], quenching media [26][27][28], liquid fuels enhancement [29], medical treatment [30], magnetic sealing [31], nano-lubricants [32][33], and many other usages.

2. Application of Nanofluids in Heat Exchangers

The applications and importance of HEs, especially plate and plate-fin HEs, have been presented and discussed in detail. It is known that HEs are used in many different industries for energy conversion, conservation, and saving. Thus, the efficiency of these HEs is of paramount importance. Various techniques have been so far employed by researchers to improve the heat transfer efficiency of HEs. Among these techniques, geometrical modification such as adopting fins to increase the heat transfer area, is one of the most widely used techniques in the literature. However, there are some drawbacks of using fins since they lead to an increase in the size and weight of the HEs [34]. Another method that can be employed to improve the heat transfer efficiency of HEs is to employ a new class of fluids which possess superior thermal properties compared to conventional working fluids. Amongst those new classes of working fluids, nanofluids are regarded as being very promising for the reasons described. Various nanofluids containing oxide, metal oxide, CNT, and a combination of different nanoparticles (hybrid nanofluids) in different working fluids have been studied across the literature.

It is well-known throughout the scientific community that CNT nanoparticles, including SW, DW, and MW, possess higher thermal properties compared to any other nanoparticles of metallic or metal oxide base. Figure 2 illustrates the thermal conductivity of some nanomaterials. As can be seen, CNT nanoparticles possess the highest thermal conductivity, and consequently the higher heat transfer rates. Therefore, many researchers have employed CNT-based nanofluids to augment the heat transfer efficiency of PHEs [35][36]. In the present review, the focus will be on the available literature that employed CNT-based nanofluids (mono and hybrid nanoparticles) to improve the heat transfer efficiency of plate HEs and plate-fin HEs. 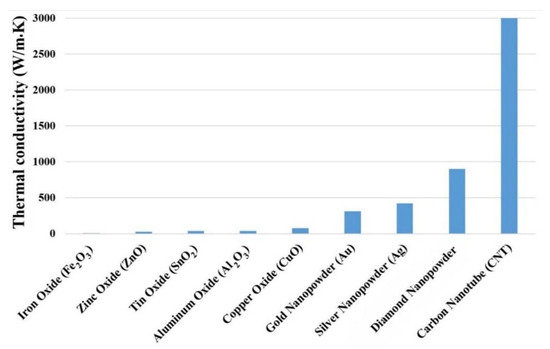 Increasing the solid concentration any further results in a deterioration of the thermal-hydraulic performance. However, more studies need to be conducted on a wide range of nanofluids and for a variety of engineering applications in order to discover the optimum parameter combinations. Furthermore, the effects of the sedimentation of, and corrosion by, nanofluids on the long-term operation of HEs also needs to be explored, as it is part of the feasibility chain for commercializing such types of fluids. Some authors have reported fouling formation due to particle deposition on the surface. Such a thin layer can cause changes to the liquid-surface wettability behavior of the HE, and hence can have a negative influence on the flow dynamics of the suspension. In addition, the relation between the enhancement in heat transfer performance of HEs and their geometric parameters, such as the fin and/or plate thickness, plate pitch, corrugation angle, and corrugation pattern, needs to be investigated given the wide range of available designs and sizes of these devices on the market. The aforementioned points are likely to be the main direction of future research into the applications of using nanofluids, especially CNT-based nanofluids, in HEs.

It presents a review of the available literature on the effects of using nanofluids, especially CNT-based nanofluids, on the thermal-hydraulic performance of two special types of compact HEs; plate and plate-fin HEs. The fundamentals of HEs have been presented and discussed, as have the effects of using different nanofluids as well as other passive techniques to improve the thermal-hydraulic performance of plate and plate-fin HEs. Based on the available literature, employing nanofluids instead of conventional working fluids results in enhancing the heat transfer performance of HEs. However, it also leads to a higher system pressure drop. The survey shows that using CNT-based nanofluids results in a higher heat transfer enhancement together with a smaller increase in the pressure drop in comparison with conventional fluids. Furthermore, combining other passive techniques, such as using vortex-generators, winglets, and perforation, with using nanofluids results in having a better thermal performance of the HE. However, the fitting of these turbulence promoting features leads to higher pressure drops in the system compared to using the nanofluids in isolation. In conclusion and based on the available literature, the usage of CNT-based nanofluids is highly effective in improving the heat transfer performance of HEs, especially plate and plate-fin HEs, since they cause the highest heat transfer enhancement at the lowest pressure drop increase.

Carbon nanotubes Colloid Heat exchangers Suspension
© Text is available under the terms and conditions of the Creative Commons Attribution (CC BY) license (http://creativecommons.org/licenses/by/4.0/)
Table of Contents
Hide
Like (0)
Dislike (0)
Download