Melanin is a widespread natural pigment that is responsible for color in hair, skin, and eyes. It provides protection against the deleterious effects of ultraviolet (UV) irradiation. Melanogenesis is the physiological process of melanin formation in which TYR, a copper-dependent enzyme, initiates the first step. Tyrosinase catalyzes the rate-limiting step where L-tyrosine is converted to L-3,4,-dihydroxyphenylalanine (L-DOPA), leading to the eventual formation of the pigment.

Abnormal TYR activity leads to pigmentary disorders, such as the abnormal accumulation of melanin (hyperpigmentation) that accounts for most dermatology visits [6][7][8]. Skin lighteners can be divided by their mechanisms of action, such as inhibition of tyrosinase transcription, inhibition of melanosome transfer, and accelerated epidermal turnover, with the most common target being tyrosinase (TYR) inhibition [9][10]. By decreasing the activity and/or expression of TYR, melanogenesis can be inhibited, leading to reduced melanin production [11]. 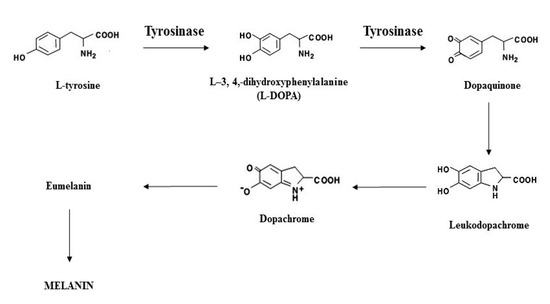 Scheme 1. Illustration of the melanogenesis pathway.

This practice is motivated by a long-standing history of social divisions, including societal pressures and stigmas, leading to the demand for lighter skin tones [17][18]. Creams, lotions, soaps, and injections indicated as a treatment for hyperpigmentation disorders are exceedingly abused as self-medication to achieve a lighter skin complexion [19][20]. In many African countries, a variety of these skin lightening preparations are easily obtained over-the-counter without a medical prescription, despite this being a requirement by law [15][21]. The most frequently used ingredients include steroids, mercury, hydroquinone (HQ) (considered the gold standard), and its derivatives [7]. Health concerns associated with the long-term use of these skin lightener ingredients include exogenous ochronosis and infectious dermatosis [22][23]. Furthermore, heavy metal exposure can lead to damage to the circulatory and urinary systems [24]. Due to their toxicity, these compounds have been prohibited as skin lightening compounds in several African countries, including South Africa, Nigeria, Kenya, and the Ivory Coast [25][26]. Despite this ban, these damaging chemicals are often illegally introduced into cosmetic formulations and, the public continues to gain access via informal channels such as street vendors, markets, and non-pharmaceutical shops [27][28]. In contrast, botanicals and natural ingredients offer safer alternatives as they may not exhibit the same kind of toxicity as synthetic compounds and could exhibit much less harmful side effects [29]. Despite this, consumers are not generally aware that natural products are composed of a variety of chemical compounds that could lead to the development of some adverse reactions. These potential effects could be overcome by researchers chemically characterizing extracts with respect to its composition [30].

Botanicals and natural ingredients provide abundant sources of treatment for various diseases such as cancer, diabetes, and dermatological conditions [31][32]. The use of plants is a common practice in traditional medicines of many cultures using several plant extracts as cosmetics to improve skin health [33][34]. This could be attributed to plant extracts being a rich source of vitamins, antioxidants, oils/essential oils, and other bioactive compounds, which provide the body with nutrients necessary for healthy skin [30]. Plants also constitute a variety of chemical compounds that elicit various pharmacological activities with the possibility that these compounds act synergistically to produce a net pharmacological effect [35]. Examples of such compounds include polyphenols and flavonoids. Polyphenols are widely distributed in plants, and several polyphenol types have been reported as being responsible for melanogenesis inhibition [36][37]. Flavonoids and chalcones are a group of polyphenols with flavonoids being one of the most explored and most numerous groups of polyphenols [38]. Flavonoids are found within the leaves, seeds, bark, and flowers of most plants, and have been studied for its oxidation of L-DOPA and have shown good antityrosinase. Furthermore, chalcones exhibit a wide array of biological activities with a number of chalcones eliciting antityrosinase activity [39][40][41].

African forests are the world’s second-largest tropical reservoir holding very promising plant materials with various biological activities, which has attracted considerable research interest [42]. Up to 90% of Africa’s human population depends directly on traditional medicine. Plants form a central component of the African traditional healthcare system and is probably the oldest of all therapeutic systems [43][44]. The importance of this resource can be illustrated by the comprehensive list of African medicinal plants in which more than 5400 plant taxa and over 16,300 medicinal uses for the plants have been identified. The use of plant extracts as topical treatments has been practiced for many generations with extracts being used for the treatment of various skin ailments, including wounds, skin infections, and inflammation [45][46]. The demand for cosmetic skin-lightening products is growing, with predictions particular to Asia and Africa forecasting the beauty industry to be worth an estimated $US 31.2 billion by 2024 [12][47]. This significant increase can also be accounted for by the pleasant aromatics and the general consensus that plant extracts are safer than synthetic products available. Thus, there is an ever-growing endeavour to explore plant-based melanogenesis inhibitors [48][49].

Various plant extracts and compounds have been investigated for their anti-tyrosinase and antimelanogenic effects [50]. Three methods are extensively used to study tyrosinase activity, which includes 2 radiometric assays (tyrosinase hydroxylase and melanin formation activities) and one spectrophotometric assay (dopa oxidase activity). Tyrosinase hydroxylase assay estimates the tyrosinase hydroxylase activity of tyrosinase by measuring tritiated water released from L-[3,5-3H]-tyrosine. The melanin formation activity assay estimates the radioactive melanin synthesized from L-[U-14C]-tyrosine while the dopa oxidase activity measures the rate of dopachrome formation, of which all three are in vitro assays [51]. These assays also include the use of positive controls whose potencies are well-known, such as kojic acid (KA), to which the substance of interest can be compared [52]. Results obtained from these assays are often presented in IC50 values, which refers to the concentration of plant extract at which half the original TYR activity is inhibited [40].

As shown in the results described in Table 2, plants reported from the Fabaceae family were only tested for their ability as TYR inhibitors, and all proved to be strong inhibitors. Further results obtained by Lall et al. [53], supported the findings for Ormocarpum and Acacia nilotica, which demonstrated the lowest IC50 value of 2.95 μg/mL and showed to have the highest TYR inhibition of 98.3% (IC50 8.61 μg/mL), respectively [36][54]. Cassipourea congoensis demonstrated significant effects of both crude extract and isolated compounds on melanin and TYR activity, respectively [49]. Rorippa nasturtium-aquaticum (Brassiaceae) showed in studies conducted by both Thibane et al. [55][56], that the extract is an effective TYR inhibitor (IC50 values of 22.24 and 1.513 μg/mL respectively) when compared to the kojic acid (KA) control (19.38 and 1.421 μg/mL, respectively). It is also noted that KA is the most prominent (91.7%, 33 articles) positive control used in the studies identified, due to its well-established potency in literature [52]. Arbutin, a HQ derivative, was the second most common (35.3%, 12 articles) used positive control as it is generally used in cosmetics as a hypopigmenting agent [57].

Studies on Thymelaea hirsuta (Thymelaeaceae) reported that this extract inhibited more than 50% of melanin at 1 μg/mL [53]. Furthermore, isolated compounds of this extract indicated that melanin production was reduced by 37% at 0.1 μg/mL, in comparison to its arbutin control, which only inhibited 33% of melanin at a higher concentration—100 μg/mL [54]. These results are further supported by Villareal et al. [55], who concluded that isolated compounds of Thymelaea hirsuta at 0.1 μg/mL (33% reduction of MC) is as effective as arbutin, a common depigmenting agent, at 100 μg/mL. Rhizophoraceae extracts (Cassipourea flanaganii and Cassipourea congoensis) exhibited compelling skin lightening properties with IC50 values obtained from studies conducted on Cassipourea flanaganii, which indicated values (1.425 μg/mL and 22.24 μg/mL, respectively) comparable to their KA controls (1.421 μg/mL and 19.38 μg/mL, respectively) [48][49]. Argania spinosa (Sapotaceae) effectively inhibited melanogenesis at 55% after 72 hours’ exposure [50]. These findings are supported by Villareal et al. [23], showing that there is a greater than 50% reduction in melanin content after 72 hours of exposure. Although significant results were obtained from separate studies, the difference in the result could be attributed to the researchers investigating different parts of the same plant (Table 1) as well as differences in plant preparation and assay protocols.

The plants in this study were distributed among 15 African countries with studies, including data from 9 South African provinces. Twenty plants species were investigated using aerial parts/leaves with these plants being collected in different regions of their respective countries and/or provinces. Thus, in natural ecosystems, factors affecting the plant’s performance include climate, soil, and geographic locations yielding various molecular complexes, thus, emphasizing the environment’s crucial role in the metabolism of plants [58][59].

The results obtained from the TYR and melanin assays of Harpephyllum caffrum showed the bark extract to have the highest inhibitory effect on TYR and melanin production in comparison to the leaf extract of the same species [32]. These results are further corroborated by a review conducted by Lall and Kishore. [60], where it was noted that Harpephyllum caffrum and Greyia flanaganii, among other listed plants, showed promising pharmacological activities, a finding that warrants further scientific investigation. Similar comparisons can be seen with Ceratonia siliqua concerning TYR activity where its isolated compounds (90% inhibition) were shown to be a more potent TYR inhibitor than its crude extract (50% inhibition) at the same concentrations (200 μg/mL).

Further comparisons can also be observed by the contrast in results obtained for TYR assays from the use of substrates L-DOPA and L-tyrosine. Here, several plant extracts have proven to be more effective in targeting the inhibition of the oxidation of either L-DOPA or L-tyrosine. This is illustrated by the TYR assay results obtained for Haloxylon articulatum, Greyia radlkoferi, Pituranthos scoparius, Myrsine africana, Hyaenanche globose, and Cleome Arabica [40][45][57]. Additional studies also included extracts of Dolichopentas longiflora, where preparations exhibited a stimulatory response on melanogenesis, whereas the IC50 value for TYR activity (26 ± μg/mL) showed contrasting results. This included Sesamum angolense of the same study, where pellets of the cells that were treated with the extract indicated no significant inhibition. However, the IC50 value (24 μg/mL) obtained indicated that the plant extract can illicit an inhibitory response [61]. Due to the complexity of pigment production, melanogenesis regulation takes place at different levels and various means of interference are possible—providing a possible explanation for the above-described contrasting results [62][63]. Mechanisms of depigmenting include; (1) tyrosinase inhibition, (2) decrease in DOPA polymerase, (3) induction of anti-inflammatory, and (4) anti-oxidant effects [64].

Extracts from the Lamiaceae family also proved to be effective inhibitors with Plectranthus ecklonii showing an IC50 value of 21.58 μg/mL with more than 70% TYR inhibition and Salvia officinalis decreasing MC to 27% at various concentrations [65][66][67]. In addition, other plant extracts elicited a significant inhibitory response on both melanin and TYR activities. These include Garcinia livingstonei and Garcinia kola (Clustiaceae), Myrsine africana (Myrsinaceae), Protea madiensis, and Serruria furcellata—both from the Proteaceae family and Sideroxylon inerme (Sapotaceae). Species from other families such as Clustiaceae (Garcinia livingstonei and Garcinia kola) exhibited significant activities with G. livingstonei exhibiting a large decrease of melanin concentration at 25 μg/mL and the seeds of G. kola inhibiting 79% of tyrosinase at 500 μg/mL [22][67].