May N. Bin Jumah
Submitted by:

Alzheimer’s disease (AD) is the most common neurodegenerative disease, and globally, over 46 million people are affected by this devastating disease. AD causes irreversible mental and cognitive deficiency including memory loss, personality disorder, and intellectual abnormality in patients older than 65 years. Central sensory systems including the visual system are also affected during the advanced stages of the disease . Collectively, complications of AD diminish the lifespan, hamper the quality of life, and cause physical impairment, which finally appears as a terrible difficulty in normal life activities. To decrease the social and economic costs and the burden of the disease on patients and their families, recently, several attempts have been made to identify disease diagnostic markers. Neuroimaging methods, such as magnetic resonance imaging and positron emission tomography, have been developed enabling researchers to diagnose AD at the early stages of the disease. Moreover, distinct biomarkers, which are essential to figure out the pathological characteristics of AD, have been observed in the cerebrospinal fluid (CSF). The advancement of AD is associated with three cardinal neuropathological features such as extracellular deposition of amyloid-β (Aβ) to produce neuritic plaques, intracellular neurofibrillary tangles (NFTs) and synaptic degeneration. These pathological alterations arise in the neocortex, hippocampus, and other subcortical regions that are crucial for cognitive functions. Aβ has been considered as the foremost risk factor that playing a vital role in the initiation and progression of AD. Aβ is generated into the typical individual, but in some instances, this peptide leads to aggregation, the starting point of disease progression. Many findings elucidate that Aβ oligomers might play a central role in neuronal dysfunction and AD.

The amyloid precursor protein (APP) is a type I transmembrane glycoprotein containing 695–770 amino acids [1]. It is regarded that abnormal proteolytic processing of APP leads to the generation of Aβ [2]. In the non-amyloidogenic pathways, APP is cleaved by α- and γ-secretases. It is known that α-secretase is a metalloprotease (ADAM) which is localized to the Golgi complex and the cell membrane. This α-secretase can cleave APP at residue L688, located in the middle of the Aβ domain [3]. α-secretase causes APP cleavage leading to the formation of soluble APP alpha (sAPPα) and a cell-membrane-bound C-terminal fragment 83 (CTF83). The generated CTF83 is cleaved by γ-secretase to produce AICD and a small p3 fragment.

In the amyloidogenic pathways, APP is cleaved by β- and γ-secretases [1]. β-secretase (BACE1) belongs to the aspartic protease family and is around 500 residues in length containing 2 active sites situated at the lumenal side of the membrane [3]. The β-secretase enzyme possesses high sequence specificity [4][5], a feature that matches with BACE1, which can cleave APP at the N-terminal of the Aβ domain, either at residues Glu682 or Asp672 [3]. BACE1 also causes APP cleavage and generates soluble APP β (sAPPβ) and a cell-membrane-bound C-terminal fragment 99 (CTF99).

On the other hand, γ-secretase is an enzymatic complex of four proteins including presenilin enhancer 2, presenilin (PSEN), anterior pharynx defective 1, and nicastrin. Indeed, each of the subunits is considered as an effective therapeutic for elevating Aβ clearance or controlling Aβ generation. Within the membrane, γ-secretase causes cleavage of βCTF99 that leads to the formation of the APP intracellular domain (AICD) and Aβ peptides. Various isoforms of Aβ isoforms are available that contain a variable length of amino acid residues including Aβ1–40 (i.e., the most abundant) and Aβ1–42 (i.e., the less soluble isoform). Aggregation of Aβ triggers the generation of protofibrils, fibrils, and oligomers, which eventually can lead to the formation of plaques, which are well-known as one of the major hallmarks of AD pathology as shown in Figure 1. 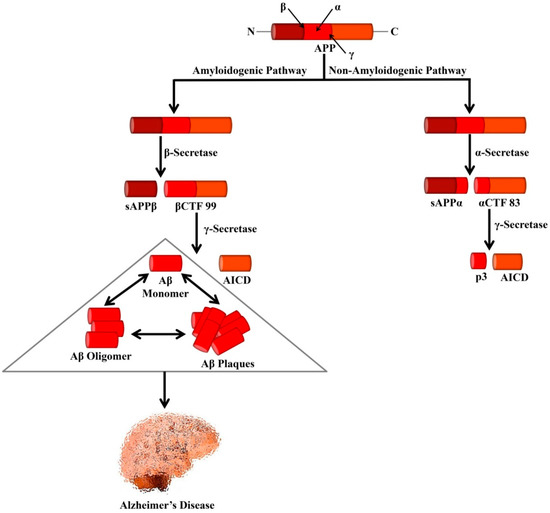 Figure 1. Processing of APP by secretases that leads to the formation of Alzheimer’s-associated Aβ peptides. In the amyloidogenic pathway, APP is cleaved by β- and γ-secretases leading to the formation of Aβ peptides and AICD. Formation of the neurotoxic Aβ is the major cause of AD. In the non-amyloidogenic pathway, APP is cleaved by α- and γ-secretases leading to the genesis of p3 and AICD. APP, Amyloid precursor protein; sAPPα, Soluble APP alpha; sAPPβ, Soluble APP beta; αCTF 83, Alpha C-terminal fragment 83; βCTF 99, Beta C-terminal fragment 99; AICD, APP intracellular domain.

It is believed that in the AD process, Aβ accumulation in the brain is one of the events that take place initially [6]. Accumulation of Aβ also initiates in the entorhinal cortex and hippocampus. Furthermore, in NFTs, intracellular hyperphosphorylated tau deposition can cause disruption in axonal transport and progressive alterations in the cytoskeleton. In 1991, several independent groups initially proposed the theory that Aβ accumulation is the major characteristic of AD pathogenesis [7][8][9]. After one year, Hardy and Higgins [10] formally proposed the ‘amyloid cascade hypothesis’. As per the hypothesis, the deposition of Aβ in the brain can trigger several events including cognitive deficit, neuronal death, synaptic loss, formation of NFTs, and phosphorylation of tau.

The amyloid cascade hypothesis was further strengthened by the fact that AD may take place due to the autosomal dominant mutations in the APP gene and these mutations in PSEN1 and PSEN2 can elevate the Aβ generation and ultimately mediate the generation of Aβ aggregates and deposits [11]. Transgenic mouse models that express forms of PSEN proteins or APP containing mutations linked with human FAD progressively show the development of memory impairments and Aβ plaques in the brain, which further strengthens the hypothesis that buildup of Aβ can trigger AD [12]. Mutations in PSEN seem to be the major cause of FAD with over 150 causative mutations that have been mapped to the genes (PSEN1 and PSEN2) encoding the PSEN proteins [13][14]. Most of these mutations seem to elevate the generation of Aβ1–42 over Aβ1–40 by mediating cleavage at residue 639 of APP over residue 637 [15]. Increased activity of BACE1 [16] and defective clearance [17] are found to contribute to the buildup of Aβ in the brain in late-onset sporadic AD (SAD). The buildup of Aβ is also found to be associated with the apolipoprotein E ε4 (APOE ε4) allele, which is regarded as the strongest genetic risk factor for late-onset SAD.

It has been revealed by post-mortem analyses that healthy elderly individuals can possess extensive amyloid pathology [18]. Moreover, brain imaging analyses showed that Aβ pathology was observed in up to 44% of cognitively healthy older people [19]. As compared to the individuals without amyloid pathology, a faster deficit in brain glucose metabolism, brain volume, and cognitive performance was experienced by individuals with amyloid deposits at baseline [20][21][22][23][24]. By 15–20 years, it has been estimated that the deposition of Aβ will precede the clinical AD symptoms [25].