The scientific community has corroborated the numerous beneficial activities of fucoxanthin, such as its antioxidant, anti-inflammatory, anticancer or neuroprotective effects, among others. These properties have attracted the attention of nutraceutical, cosmetic and pharmacological industries, giving rise to various possible applications. Fucoxanthin may be chemically produced, but the extraction from natural sources is considered more cost-effective, efficient and eco-friendly. Thus, identifying suitable sources of this compound and giving a general overview of efficient extraction, quantification, purification and stabilization studies is of great importance for the future production and commercialization of fucoxanthin.

The entry describes the potential applications of fucoxanthin pigment. Its production must face several challenges since its chemical synthesis represents a complex process which is not efficient and the extraction method from marine organisms has been not standardized. The main characteristic of a profitable product is to be obtained by using simple, fast, and based on low-cost technologies. This work provides an overview of different extraction conditions that may help in the standardization of the process, especially important at an industrial level. Therefore, the main aim of this work has been to underline the best algae species in terms of fucoxanthin production and the most promising extraction and purification methods, while offering a complete panorama of the described bioactivities of fucoxanthin which includes bioavailability, administration via, doses and stability of the molecule under different conditions.

Traditionally, marine resources like micro- and macroalgae have been used as foods and medicines, mainly in oriental countries, such as China, Japan or Indonesia. However, their popularity is growing in western countries. In previous years, numerous studies have reported that these organisms present high nutritional values as foods and could be a possible source of compounds with bioactive potential. Several examples are fatty acids, carotenoids, polysaccharides, phytosterols, and phenolic compounds, which have been demonstrated to exert beneficial health effects, such as anticoagulant, antitumor or antioxidant properties [1]. Thus, the development of new formulations in food, cosmetic and pharmaceutical sectors using an algae compound is gaining relevance. Among macroalgae, brown ones (Class Phaeophyta) have been reported to present a greater amount of bioactive compounds, compared with red (Class Rhodophyta) and green (Class Chlorophyta) macroalgae [2]. Some bioactive compounds of brown macroalgae stand out such as phlorotannins, phylopheophylin and specially fucoxanthin [3]. Fucoxanthin is a secondary metabolite that belongs to the family of carotenoids and is present in the chloroplasts of algae cells. It is considered one of the most abundant and representative pigments of brown algae. This compound has been studied in numerous brown algae, such as in the genera Undaria, Sargassum, Laminaria, Eisenia, Alaria, Cystoseira or Hijikia [4][5], but it has also been found in red, green and unicellular microalgae [6][7][8].

Numerous scientific works have corroborated the beneficial activities of fucoxanthin, including antioxidant, anticancer, antihypertensive, anti-inflammatory, anti-diabetic, anti-obesity, neuroprotective, anti-angiogenic capacities and also photoprotective effects [4][7][9][10][11][12][13][14][15][16]. Considering these properties, the fucoxanthin molecule has a potential application in several industrial sectors such as food, cosmetic and pharmaceutical sectors. In fact, an expansion of the fucoxanthin market that might reach $120 million by 2022 is expected [17]. Nevertheless, the commercialization and production of this compound still have to face certain challenges, since its chemical synthesis is a complex and inefficient process, and the method of extraction from marine organisms has not been yet standardized [18][19]. To achieve the profitably of a product, it should be easily and quickly obtained, using low-cost technologies [20]. Although fucoxanthin and other carotenoids may be artificially synthesized, their extraction from natural sources presents several advantages, such as easy accessibility to the sources and an economic and environmentally friendly production, avoiding the use of dangerous chemical compounds. Consequently, future and innovative studies about extraction methods would be of great interest to favor the commercialization of fucoxanthin.

Several studies have cultivated brown algae to extract fucoxanthin, and many aspects have been demonstrated to influence its content, including environmental factors (water temperature, composition, light, etc.), stage of the life cycle or seasonal variations. Undaria pinnatifida is recognized as a key species to produce fucoxanthin and has been widely cultured in oriental countries (mostly in Japan, Korea and China), but its culture is growing in western ones. This species has been cultivated in deep seawater, due to several advantages, like the abundance of nutrients and low presence of pathogens. In this situation, the fucoxanthin content ranged between 0.32–2.67 mg/g, being lower in the later stages than in the younger stages of the life cycle [21]. In another study, U. pinnatifida was collected from two localizations during the growing season. The variations in the fucoxanthin content between localizations were attributed to environmental factors, such as sunlight, temperature and the amount of nutrients present in the water. In both locations, the content peaked between winter and spring, while the lowest peak was detected in summer. In addition, the blade of the algae (structure used for food applications) showed a higher fucoxanthin content, compared with sporophyll (reproductive structure, not consumed) [22]. Similar spatial and seasonal variations have been observed in other brown algae species such as Sargassum horneri, Cystoseira hakodatensis and Nizamuddinia zanardinii [23][24][25].

Considering all the factors that influence the fucoxanthin content, the obtaining process should be optimized to obtain the highest wield possible. The present study aims to provide a full vision of extraction, quantification, and purification methods that will allow the choice of the optimal protocol for recovering the highest ratio of fucoxanthin depending on the selected species and the laboratory facilities available. Also, three stabilization methods of the molecule will be reviewed, due to the importance of preventing fucoxanthin losses induced by degradation reactions. A general overview is presented in Figure 1. 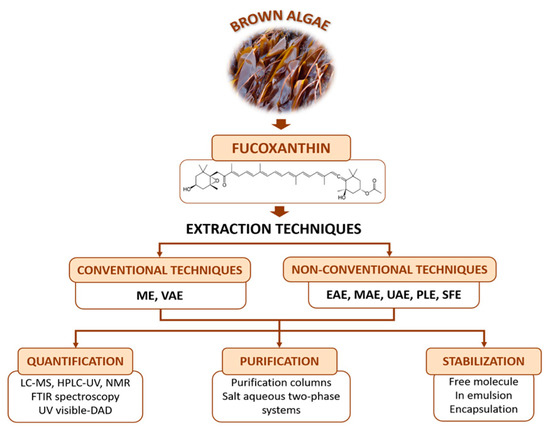 Fucoxanthin is a pigment that offers different alternatives for its quantification since it can be performed through analytical techniques (based on its molecular mass detection), spectrophotometric methods (based on its color feature), or a combination of both systems. The most common instruments utilized for its identification and quantification are: (1) liquid chromatography-mass spectrometry (LC-MS) using mass-to-charge ratio (m/z); (2) high-performance liquid chromatography (HPLC) coupled to ultraviolet (UV) or (photo)diode array detectors (PDA/DAD), which detects maximum absorbance peak at 446 nm; (3) nuclear magnetic resonance (NMR), which determines its structure; or (4) spectrophotometric readers that provide absorbance based data [28]. Most of the protocols developed for the quantification of fucoxanthin using LC, either HPLC or UPLC equipment, usually establish absorbance around 450 nm.

Fucoxanthin-rich extracts may be concentrated and further purified. For the performance of this step, extracts can be loaded onto a silica gel packed into a glass column and with a solvent. The solvent type varies throughout scientific literature; however, n-Hx is frequently used as part of a mixture of solvents, for example, n-Hx:AcO, which has been applied in different proportions such as 6:4 (v:v) and 7:3 (v:v) [26][27]. Another study used a few solvents starting with a mixture of n-Hx:DE that gradually reduced the amount of n-Hx from 80 up to 0, then finished with MeOH. This option showed a co-elution of lipids. Thus, to achieve a higher degree of purity, fractions were dissolved in Ch and applied on preparative thin-layer chromatography plates using a combination of Hx/De/acetic acid (70:30:1, volume-based) and MeOH. To separate neutral lipids, the latter solution may be used, and for the polar ones, Ch/AcO/MeOH/acetic acid/W (50:20:10:10:5, volume-based) [28]. Similarly, another work used Ch/DE/n-Hx/acetic acid (10:3:1:1, volume-based) to obtain a purified extract of fucoxanthin [29]. Another method of purification is based on salt aqueous two-phase systems, but this process needs additional purification steps. An effective alternative is the use of ultra-filtration to process an ethanolic salt aqueous two-phase system which may reduce the unspecific losses of the pigment as well as the amount of protein impurities, allowing an increase in the purity of the permeate up to 63% [30]. After the selected purification step, the orange-red fraction that contains fucoxanthin is collected and can be submitted to further purification stages with a process like prep-HPLC. After its separation, the fraction of interest is further analyzed to identify it.

The optimization of the extractive process, purification and stabilization of this molecule is of great interest to the industry due to the several therapeutic activities described, making it a useful compound to incorporate in nutraceuticals, cosmetics, and even pharmaceutical products. As mentioned before, fucoxanthin has gathered much attention of late due to its strong antioxidant proprieties, anti-cancer, anti-inflammatory activities and anti-obesity effects, among others (Figure 2) [87]. Regarding the last property, fucoxanthin can be added as a food component to accelerate the adaptive thermogenesis [88]. 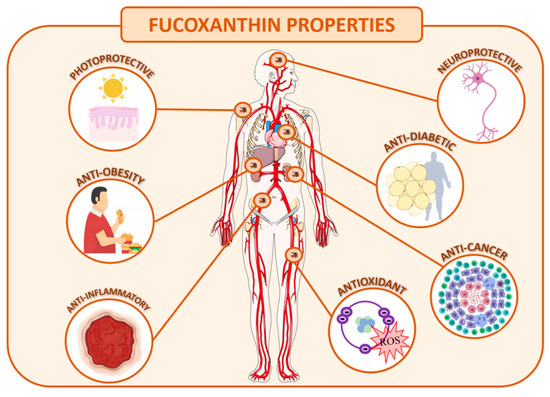 The selection of the extraction and purification methods is a key factor to achieve acceptable yields, prevent pigment degradation and reduce production costs. In addition, the use of environmentally friendly extraction/purification techniques may increase the commercial value of the final product. It is necessary to standardize the experimental conditions, especially when scaling up the process to an industrial level. Regarding the storage alternatives, fucoxanthin encapsulation using natural products is considered as one of the best approaches, followed by its emulsion using natural emulsifiers. Therefore, future and innovative studies regarding efficient, quick, eco-friendly and safe extraction methods can speed up the progress towards its commercialization and incorporation of fucoxanthin in the global market.