Silver nanoparticles (AgNPs) are an attractive alternative to plasmonic gold nanoparticles. The relative cheapness and redox stability determine the growing interest of researchers in obtaining selective plasmonic and electrochemical (bio)sensors based on silver nanoparticles. Cyclophanes are well known for their great receptor properties and are of particular interest in the creation of metal nanoparticles due to a variety of cyclophane 3D structures and unique redox abilities. The chemistry of cyclophanes offers a whole arsenal of approaches: exocyclic ion coordination, association, stabilization of the growth centers of metal nanoparticles, as well as in reduction of silver ions.

These applications require surface modification of AgNPs that would allow to adjust their association with the target substrate or to offer higher selectivity towards association with bacterial cell walls. Depending on the application, AgNPs must be modified with different functionality. For electrochemical sensors and antibacterial nanomaterials, it is necessary to introduce functionality, providing AgNPs with selectivity of association [10]. However, the strategy of creating AgNP-based colorimetric sensors is different [11]. In order to obtain a wavelength shift in the presence of target a substrate, it is necessary to introduce functionalities that would not only bind to the target substrate but also induce aggregation of AgNPs [12].

One of the most promising strategies for creating selective nanoparticles is using supramolecular agents capable of forming host–guest complexes with the target substrate [13]. Cyclophanes are promising macrocyclic 3D host molecules, which are versatile building blocks for self-assembled materials [14][15][16]. Cyclophanes have been reported as selective host molecules for recognition of inorganic ions, and organic molecules and have been shown promising in biopolymer binding [17][18][19][20][21][22]. The vast opportunities for obtaining various functional derivatives and rich spatial geometry of cyclophanes offers the means necessary for achieving this goal [23].

Several classes of cyclophanes were chosen for review: calix[n]arenes, their sulfur bridged analogue thiacalix[4]arenes, resorcin[4]arenes and pillar[n]arenes (Figure 1). Other cyclophanes are out of current review because publications describing their use are scarce and are following along similar lines. We report recent findings in the field of cyclophane-functionalized AgNPs synthesis and application (Figure 2). Using three-dimensional macrocyclic stabilizing agents at the stage of AgNPs synthesis provides unique means to adjust the sizes of nanoparticles at the growth stage, which is promising in the nanomaterial design field. Functionalization of AgNPs with cyclophanes allows achieving high selectivity towards various inorganic, organic and biomacromolecular substrates. It opens wide opportunities in developing novel selective antibacterial agents, surface-enhanced Raman scattering (SERS)-based colorimetric sensors and electrochemical sensors. 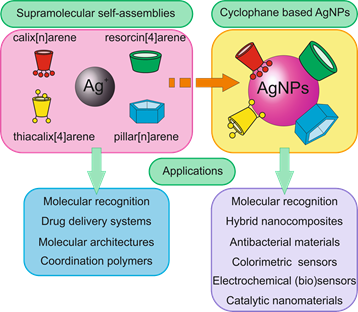 Calix[n]arenes are the most wide-known cyclophane platforms. Most of the synthetic routes, patterns of substrate recognition and supramolecular self-assembly were realized on this platform for the first time and afterwards were successfully adapted to other cyclophanes. Ease of modification of lower and upper rims of calixarenes have made them versatile building blocks for supramolecular materials and surface modifiers for adjusting receptor and self-assembly properties of colloidal materials. Separate modification of upper and lower rims of calixarenes has become one of the common practices to obtain amphiphilic host molecules for Langmuir–Blodgett films and consequently for modification of nanoparticles, allowing to alter their lipophilicity [24].

Among cyclophanes mentioned, thiacalixarenes are characterized by high conformational flexibility and larger sizes of macrocycles compared to calixarenes [25]. The unique feature of thiacalix[4]arenes is the presence of sulfur bridge atoms, which are capable of coordinating with transition metal ions, having high affinity to silver ions. For the most widespread representative of thiacalixarene-based synthetic platforms, p-tert-butylthiacalix[4]arene, three conformations are readily available (cone, partial cone and 1,3-alternate). This opens a unique possibility of distributing substituents on both sides from the macrocyclic rim, which in combination with introducing various substituents allows to reach various substrate selectivities. Even more interesting is the applicability of this feature in various branches of material science and supramolecular chemistry. It allows to achieve unique association patterns, adjust polymer properties and vary aggregation of nanoparticles [26]. Due to the unique geometry of thiacalixarenes, they tend to form nanocage associates [27]. Therefore, in regard to silver ions and nanoparticles, thiacalixarenes are unique, allowing new patterns of self-assembly and nanoparticle functionalization.

2.3. Synthesis and Application of Resorcin[4]arene-Based AgNPs

Resorcinarenes are different from other metacyclophanes because of their possibility of functionalizing bridge fragments (forming "lower rim") by using functional aldehydes at the macrocyclization stage of their synthesis. Presence of eight OH groups forming the upper rim and absence of diverse conformations make their host–guest properties quite specific: they tend to form dimeric capsules enclosing the target substrate due to interactions between eight substituents of each cyclophane molecule [28]. It is especially useful for colloidal plasmonic sensors in which SERS is dependent on nanoparticle aggregation, and in the presence of the target substrate the capsule is formed, which leads to nanoparticle aggregation [29]. (Thia)crown derivatives of resorcinarene are an exception to this rule: such functionalities distort resorcinarene symmetry and present efficient cation binding functional groups. Therefore, such resorcinarene derivatives tend to form crystalline structures, which can differ depending on solvent or thiacrown fragment structure [30].

Pillar[n]arenes are a relatively novel class of para-cyclophanes, which was first described in 2008 [31]. These macrocycles attract special interest of researchers due to possibility of creating unique supramolecular systems based on them [32]. Pillararenes have a number of attractive features, such as synthetic accessibility, planar chirality and a tube-shaped three-dimensional structure, which provides an electron-donor cavity and the possibility of stringing elongated acyclic and planar cyclic guest fragments. Due to these unique properties, developing novel functional organo-inorganic nanomaterials based on pillararenes is especially attractive [33]. The key feature of pillar[5]arenes compared to other cyclophanes is the combination of a wide range of synthetically accessible functional fragments inherent for calixarenes and resorcinarenes with the possibility of forming pseudo-rotaxanes, rotaxanes and poly-pseudo-rotaxanes [34][35]. The presence of metal ions in supramolecular architectures allows to adjust their properties and provides them with unique optical, magnetic and electric properties [36].

Various strategies are used to create silver nanoparticles such as modifying, functionalizing, templating, reducing and stabilizing. As mentioned in the above publications, the choice of functional groups of cyclophanes for modification of AgNPs is quite similar. On the other hand, each class of macrocycles (calix[n]arene, thiacalix[4]arene, resorcin[4]arene, pillar[n]arene) offers unique patterns of interacting with the substrate. For example, significant differences in organic substrates that are recognized by resorcinarene-modified AgNPs and pillararene-modified AgNPs are observed. Thiacalixarenes prove promising for Ag nanocluster stabilization and for creating supramolecular ensembles with silver ions, which encourages their use in supramolecular templating of AgNPs formed by reduction.

The cyclophane functionalized nanoparticles are used for recognition of various biomolecules in aqueous media, namely amino acids, hydroxyl acids, proteins and nucleic acids. Based on cyclophane-capped silver nanoparticles, electrochemical and colorimetric sensors were created for the selective determination of heavy metal cations (Cu2+, Fe3+, Hg2+, Cd2+, Pb2+), anions (H2PO4−, I−), amino acids (histidine, aspartic acid, tryptophan, glutamic acid), polycyclic aromatic hydrocarbons and pesticides. Therefore, we can conclude that over the last years cyclophanes have opened new and interesting opportunities for selective substrate recognition (based on unique patterns of substrate-induced aggregation). Depending on substrate structure, cyclophane type and functionality can be successfully devised. While it was shown that silver nanoparticles can be successfully prepared in the presence of any cyclophane mentioned above, it is still intriguing to study the relation between silver ion aggregation with cyclophane and the sizes of AgNPs formed.

It is certain that cyclophane-based silver nanoparticles will find application in many areas of life. Cyclophane-functionalized AgNPs have proven promising for medicine and diagnostic fields. The tendency of cyclophanes to form supramolecular assemblies with various substrates allows using them in constructing AgNP-based colorimetric sensors due to substrate-induced nanoparticle aggregation. Depending on the macrocyclic platform and functionalization, cyclophanes are selective to a wide range of substrates. This possibility of adjusting association behavior ranges from small inorganic and organic substrates, and allows creating AgNPs with adjustable cytotoxicity towards different bacteria. A different pattern is implemented in electrochemical sensors: differences in affinity towards substrates allow achieving a selective response towards small-sized substrates. The use of cyclophanes for silver nanocluster stabilization is emerging. Also, there are future prospects for use of cyclophane–silver ion assemblies as templates for Ag(0) nanomaterial designs due to manifold morphologies of associates formed with silver ions. It can be concluded that, in the nearest future, cyclophane-modified AgNPs and silver nanomaterials will find applications in nanoelectronics.