Multiple myeloma (MM) is the second most common hematologic malignancy in the world. Even though survival rates have significantly risen over the past years, MM remains incurable, and is also far from reaching the point of being managed as a chronic disease.

Multiple myeloma (MM) is the second most common hematologic malignancy, accounting for 1% of all cancers globally in 2016 . MM mainly occurs in older people, with a median age of 66–70 years at the time of diagnosis [1]. Age demography significantly contributes to MM progression and regimen design [2][3]. Survival rates are higher in younger people, partially due to the feasibility of autologous stem cell transplant (ASCT) and better drug tolerability during adjuvant therapy to ASCT or non-transplant systemic therapy. Nevertheless, overall survival rates have risen significantly over the past decades [4][5], with a five-year survival rate of 53.9% between 2010 and 2016 in the United States (US) [5]. Improved outcomes resulted from a significant increase of the use of novel therapies, including proteasome inhibitors and immunomodulatory drugs (IMiDs), which increased from 8.7% in 2000 to 61.3% in 2014 in US patients [6]. Additionally, the introduction of low-dose continuous therapy and maintenance therapy schemes post-ASCT or high-dose induction therapy also contributed to improved clinical outcomes, mainly through palliating adverse effects to increase drug tolerability, especially in weak elderly patients [7]. Aside from improvements in therapeutic design, novel drugs are designed to target specific molecular mechanisms involved in MM, especially the nuclear factor kappa B (NF-kB) signaling pathway [8][9][10], which is described in the following context.

Myeloma, also known as plasma cell myeloma, is the accumulation of malignant plasma cells in the bone marrow. Initially, in the asymptomatic phase (known as smoldering myeloma), myeloma cells produce abnormally substantial amounts of monoclonal proteins (M-proteins) that are released to the blood stream. As the disease progresses to the symptomatic phase, known as MM, the myeloma cells harness the bone marrow microenvironment to promote growth and invasion. MM progression leads to bone destruction, hypercalcemia and renal insufficiency, and may result in patient lethality.

MM is linked to the frequent onset of hyperploidy, chromosomal aberrations, genetic mutations and epigenetic transformations. Among these anomalies, hyperploidy is most prevalent, contributing to nearly half of all MM cases [11]. In non-hyperploid MM, chromosomal aberrations at the B cell class switching gene locus IGH frequently occur, leading to aberrant production of M-proteins in MM patients [12][13]. Aside from chromosomal changes, genetic mutations common in cancers frequently occur in MM too, e.g., the oncogenic KRAS and NRAS transformations and loss-of-function TP53 mutations [14][15][16]. Some genetic modifications are more MM-specific and contribute to hyperactive NF-kB signaling. These include the amplification or rearrangement of NIK, LTBR, TACI, NFKB1, NFKB2 and CD40 genes, as well as deletion or loss-of-function mutations in genes like CYLD, BIRC2/BIRC3 (cIAP1/cIAP2), TRAF2 and TRAF3 [17]. On the other hand, MM progression displays distinct epigenetic landscape changes. For example, extensive DNA hypomethylation in non-CpG islands occurs during the transition from monoclonal gammopathy of undetermined significance to the myeloma stage [18]. Moreover, hypermethylation of a subset of transcription factors, e.g., FOXD2, GATA4, RUNX2, and cell cycle-related genes, e.g., CDKN2B, potentially remodels cellular processes to promote tumorigenesis [18]. Furthermore, MM development is supported by the promoter methylation of the P53 gene, which is sustained by the NF-kB-regulated cytokine interleukin-6 (IL-6) [19]. Aside from DNA methylation, histone modifications such as acetylation and methylation also significantly alter the epigenetic landscape and drug response of MM [20]. For instance, overexpression of the histone methyltransferase gene EZH2 that frequently occurs in MM may be induced by hyperactive non-canonical NF-kB signaling [21]. Inhibition of EZH2 sensitizes MM to bortezomib treatment in vivo, through cooperative MYC suppression and inhibition of H3K27 trimethylation to regulate genes involved in B cell metabolism and antibody production [22][23]. NF-kB gene mutations are known to be the most prevalent in MM among all human cancers [24][25], and plays a pivotal role in anti-cancer therapy and drug resistance [26][27][28][29].

NF-kB refers to a family of transcription factors that form homo- and hetero-dimers within the family, as well as with other transcription factors [30]. NF-kB signaling is classified into the canonical and non-canonical pathways that are represented by the transcriptional protein complexes of p50/RelA and p52/RelB, respectively [31]. These two pathways are activated by distinct membrane receptors that respond to extracellular ligands like tumor necrosis factor a (TNFa), interleukin-1 (IL-1), receptor activator of NF-kB ligand (RANKL), and so on (Figure 1). In canonical NF-kB signaling, receptor activation leads to formation of the TRAF2-TRAF5-TRAF6 complex, which activates TAK1 kinase to phosphorylate the complex of IKKa, IKKb and NEMO. IKK complex phosphorylation subsequently triggers the degradation of IkB to release the p105 protein for proteasomal processing to the p50 protein. Consequently, the p50/RelA complex translocates to the nucleus and initiates transcription. Non-canonical NF-kB signaling involves the TRAF2-TRAF3-TRAF6 complex, which activates the NIK kinase to phosphorylate the IKKa kinase. Phosphorylated IKKa then triggers proteasomal processing of p100 to p52 for transcriptional activation. Although the canonical and non-canonical pathways have variant triggering signals and downstream targets, both pathways are involved in MM pathogenesis and progression .

NF-kB signaling plays a pivotal role in promoting cancer growth, angiogenesis and tumor-microenvironment crosstalk, which mainly involves the production of pro-inflammatory cytokines, inflammation mediators, cell adhesion molecules, among others, to establish a favorable tumor microenvironment for MM tumorigenesis and disease progression. Non-canonical NF-kB signaling is also a key determinant of other oncogenic drivers, such as telomerase and telomeric proteins, which are commonly deregulated in cancers [32][33][34][35]. NF-kB signaling, in combination with other potent transcription factors such as STAT3, also plays important roles in regulating apoptosis and polarization of immune subtypes, which contribute to a pro-tumoral microenvironment [36][37]. Hence, many first-line anti-MM drugs have an indirect impact on the NF-kB signaling pathway (Figure 1). For instance, bortezomib is a reversible inhibitor of the 26S proteasome [38] and thus prevents the proteasomal cleavage of NF-kB proteins and the IkB protein to inhibit gene transcription activation. The insult of bortezomib on MM cells is further enhanced by the fact that the proteasome is overloaded by excessive M-protein production in myeloma cells. On the other hand, the corticosteroid dexamethasone induces inhibitor of kB (IkB) protein synthesis to inhibit NF-kB signaling [39]. Another first-line therapy drug, the IMiD lenalidomide, diminishes sustained RelA binding to open chromatin by inhibiting the Ikaros proteins Ikzf1 and Ikzf3 [40][41][42]. Co-administration of lenalidomide and dexamethasone suppresses interleukin-2 (IL-2), immunoglobin M (IgM) and immunoglobin G (IgG) production, hence reducing the protein load of MM patients [43]. In recent years, immunotherapy using antibodies and chimeric antigen receptor T (CAR-T) cells against specific NF-kB signaling receptors has gained more attention. For example, antibodies against B cell-activating factor (BAFF) inactivate non-canonical NF-kB signaling in MM cells [44][45]. Clinical trials are ongoing, so it is still too early to conclude whether any of these strategies works. 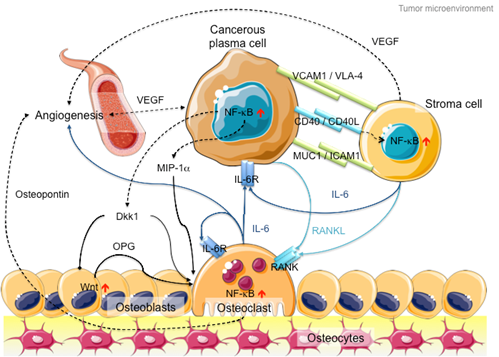 Even though receptor-/ligand-specific antibodies can target NF-kB signaling with high specificity, the diverse NF-kB signals in MM cells and their microenvironment limit the application of these therapies to treat MM effectively in vivo. Tumor evolution also contributes to altering pathways to develop drug resistance. Hence, directly targeting the molecular machinery of NF-kB signaling remains crucial. Until now, no specific NF-kB inhibitor has been approved for treating MM. We will discuss the challenges of developing specific NF-kB inhibitors for MM treatment.

3. NF-kB Signaling: The Rose with Thorns in MM Treatment

Even though NF-kB signaling plays a critical role in MM, specifically targeting this signaling pathway proves to be more difficult than previously thought.

The foremost hurdle is drug safety. NF-kB signaling plays a key role in innate immunity and inflammation. Constitutive inactivation of NF-kB signaling silences the immune system, subsequently rendering patients susceptible to infections. Population-based studies have pointed out that MM patients displayed a seven-fold higher risk of bacterial infection and a 10-fold higher risk of viral infections as compared to randomized control individuals, resulting in a stunning 22% death rate among MM patients at one-year follow-up [54]. It is noteworthy that transplanted patients displayed a broader spectrum of infection [55], where infection rate may be reduced by combined IMiD therapy [56], due to the fact that immunosuppressive drugs are administered to prevent graft-versus-host defense. On the other hand, bortezomib-based therapy is associated with a higher risk of severe infection in various studies [56][57][58], possibly through inhibition of both canonical and non-canonical NF-kB pathways. Hence, it is hypothesized that targeting of one NF-kB pathway may be safer than inactivating both NF-kB signaling pathways. Nevertheless, trials of many IKKb inhibitors showed severe adverse effects [59], even though non-canonical NF-kB signaling is hypothesized to be unaffected. In contrast, the anti-RANK antibody denosumab, which is recommended as adjuvant therapy to MM patients to alleviate hypercalcemia due to hyperactive osteoclasts [60], produces little toxicity but cannot treat MM because of its narrow-spectrum inhibition of RANK-mediated non-canonical NF-kB signaling. Hence, striking the right balance between drug safety and treatment efficiency remains challenging.

Secondly, the context-specific and spatio-temporal regulation of NF-kB signaling complicates therapeutic design. This complexity is further complicated by the interplay between cancer and its immune microenvironment [61][62]. For example, the non-steroidal anti-inflammatory drugs (NSAIDs) (e.g., aspirin, sulindac and tolfenamic acid) that target the COX-1/2 genes may suppress NF-kB signaling during short-term administration but activate NF-kB signaling after prolonged treatment [59].

Thirdly, selectivity remains a critical issue. For instance, several IKKb inhibitors exhibit off-target effects, whereas others display high selectivity toward IKKb and loss of inhibition through IKKa [59]. In this regard, combined treatment may offer hope for highly selective inhibitors, but this also requires more consideration of the treatment burden on patients, especially when many MM patients are old and weak. Nevertheless, high selectivity suffers from poor treatment efficiency. For instance, the anti-BAFF antibody tabalumab, which specifically inhibits non-canonical NF-kB signaling, failed to improve outcomes in MM patients in a phase II trial in which it was combined with bortezomib and dexamethasone [63].

Lastly, the lack of structural information hampers rational drug design, although solving the structure does not guarantee success either. For example, structure of the NF-kB inducing kinase (NIK) has been solved [64], but the NIK inhibitors AM-0216 and AM-0561 failed due to poor pharmacokinetics in vivo, even though they displayed high NIK binding affinity and NIK-dependent cytotoxicity in vitro [65]. On the contrary, a peptide mimetic of the NF-kB essential modulator (NEMO) binding domain that blocks IKK complex formation [66] made its way to clinical trials in dogs for treating diffuse large B cell lymphoma (DLBCL) and soft tissue sarcoma (STS) [67], but no clinical trial has been reported to treat humans. Other molecular targets might lack specific inhibitors after solving the structure [68]. Consequently, no specific NF-kB inhibitor has been successfully developed to treat MM until now.