Chemokines in the cholangiocarcinoma

Cholangiocarcinoma (CCA), a heterogeneous tumor with poor prognosis, can arise at any level in the biliary tree. It may derive from epithelial cells in the biliary tracts and peribiliary glands and possibly from progenitor cells or even hepatocytes. Several risk factors are responsible for CCA onset, however an inflammatory milieu nearby the biliary tree represents the most common condition favoring CCA development. Chemokines play a key role in driving the immunological response upon liver injury and may sustain tumor initiation and development. Chemokine receptor-dependent pathways influence the interplay among various cellular components, resulting in remodeling of the hepatic microenvironment towards a pro-inflammatory, pro-fibrogenic, pro-angiogenic and pre-neoplastic setting. Moreover, once tumor develops, chemokine signaling may influence its progression.

Cholangiocarcinoma (CCA) comprises a heterogeneous group of biliary cancers, which can originate from cholangiocytes located at any portion of biliary tree .[1]. Based on the anatomical position, this tumor can be classified in intrahepatic (iCCA) and extrahepatic (eCCA) CCA, this latter further divided into perihilar (pCCA) and distal CCA (dCCA), depending on the site within the biliary system [2].

CCA represents the second most frequent hepatic malignancy, accounting for 10–20% of all primary liver cancers [2][3] and its incidence is increasing dramatically [3]; accordingly, CCA mortality has increased worldwide in the last decades [4][5][6][7][8].

CCA is commonly asymptomatic at early stages and is often diagnosed when the disease is disseminated [9][10]. This limits the effectiveness of the current therapeutic strategies, which are preferably based on surgical resection, because antitumor drugs have only limited effects, in part owing to the high chemoresistance of this tumor[9][10]. As a result, CCA prognosis is dismal, with a 5-year survival lower than 20% [9][10].

Although the resistance to drugs is an intrinsic feature of malignant cholangiocytes [11], an additional role is played by the extensive desmoplastic microenvironment wherein neoplastic cells are embedded. Recent data support the concept that the desmoplastic stroma, that is a main feature of CCA, contributes to the decreased sensitivity of this tumor to drug-cytotoxicity, hampering responses to chemotherapy and resulting in a poor clinical outcome .

Although most CCAs are diagnosed de novo without an apparent liver disease background, there are well-established risk factors indicating that the appearance of CCA is favored in the context of chronic inflammatory conditions of the biliary tree (such as primary sclerosing cholangitis (PSC)) . In this setting several autocrine, paracrine and endocrine signals concur to modify the environment in which tumors eventually develop: a spectrum of soluble factors (growth factors, cytokines, chemokines and proteases), released in a dysregulated fashion, sustain the inflammatory response and induce the ECM remodeling, promoting CCA initiation and progress[12]. Among these, chemokines are emerging as key factors in the complex network of events involved in development, invasiveness and immune evasion of several malignancies, including CCA.

Among the immune cell types infiltrating the desmoplastic stroma, TAMs play a crucial role in regulating angiogenesis, lymphangiogenesis, tumor proliferation and modulating ECM changes , through the release of inflammatory mediators .

Tumor-infiltrating lymphocytes (TILs) represent a highly heterogeneous populations [9,10] that comprise CD8+ cytotoxic T cells, CD4+ T helper cells, Tregs and B lymphocytes. Whereas high levels of CD4+ and CD8+ within CCA microenvironment have been associated with better prognosis , low numbers of CD8+ TILs are correlated with poor overall survival [13]. Regarding B cells, no data on their pathogenic role of in CCA are available, even if high densities of CD20+ B cells have been observed in low-grade tumors and associated with a favorable overall survival . Little is known regarding the pathogenic role of NK cells in CCA, although, according to recent studies, these cells seem to inhibit CCA growth and reduce tumor chemoresistance .

The role of neutrophils in CCA is still indefinite, even a significant commitment of infiltrated tumor-associated neutrophils (TANs) in CCA tissues has been reported [14].

Tumors employ several mechanisms to establish a functional vascular system comprised of both blood and lymphatic vessels, to sustain cell growth [15][16]. CCA cells promote neo-vascularization by enhanced expression of angiogenic growth factors, whereas endothelial cells can release inflammatory chemokines to attract leukocytes and establish a pro-fibrotic and pro-angiogenic milieu, which in turn support migration, invasion and EMT [17]. The paracrine effects between CCA cells and surrounding stromal cells are summarized in Figure 1. 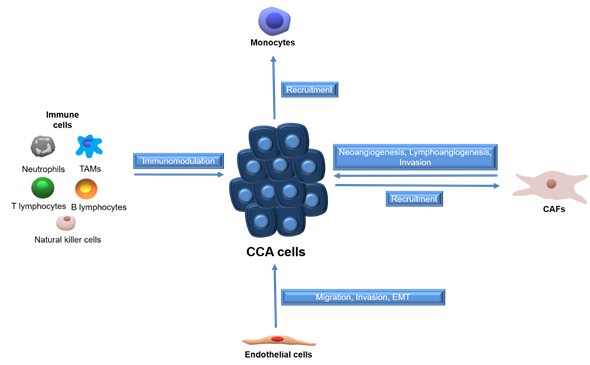 Chemokines are a family of highly conserved small (8–12 kD) proteins, sharing the ability to chemoattract leukocytes. In humans, 48 chemokines have been identified, classified in four groups, according to the position of the first cysteine residues in their N-terminal sequence: XCL, CCL, CXCL and CX3CL, where X represents any other amino acid [18][19]. Chemokine signaling is transduced by G protein-coupled receptors, also divided in four groups (XCR, CCR, CXCR and CX3CR). Among the 19 receptors identified, most can bind to different chemokines, generally belonging to the same subfamily, with variable affinity and different functions [20]. Similarly, some chemokines bind and activate more than one receptor. As an important consequence of this promiscuity, chemokine-receptor interaction and the resulting signaling cascade are finely modulated, in concert with the modifications of the microenvironment.

Chemokines can also bind and activate a different category of receptors, named atypical receptors (ACKR1-6) [21], which show extreme ligand promiscuity.  ACKRs lack a G protein activation motif and ligand-receptor interaction leads to β-arrestin recruitment and subsequent internalization and degradation/recycling of the ligand-receptor complex, thus serving as a chemokine reservoir or scavenger [22][23][24]. Deregulation of ACKR expression has been reported in many tumors and appears to correlate with the metastatic process [25].

Chemokines were firstly reported as key effectors of immune and inflammatory reactions, driving recruitment and homing of leukocytes into infected or injured tissues [26]. Subsequently, an essential role in several pathophysiological processes, including organ development, tissue homeostasis, angiogenesis and cancer has been recognized [27]. According to their biological functions, chemokines can be distinguished in homeostatic, which are constitutively expressed in specific cell types and contribute to immune homeostasis, and inducible, whose expression is related to certain conditions, such as inflammatory responses. Concomitantly, leukocytes express a broad spectrum of receptors, making them susceptible to many chemokine ligands [28]. In particular, CC ligands mainly act on monocytes/macrophages and T cells, while CXCL1–8 primarily exert their chemotactic action on neutrophils and CXCL9-11 on T-cells. Finally, a few chemokines display both homeostatic and pro-inflammatory functions, depending on the localization and the timing of expression [28][29].

4. Regulation of Chemokine Expression and Effects

A variety of mechanisms have developed to control chemokine expression and/or activity, in order to ensure a proper cell trafficking and homing during innate and adaptive immune response. A number of polymorphisms have been identified in genes encoding chemokine and chemokine receptors, resulting in an altered expression/stability or improper ligand-receptor interaction. For instance, nine SNPs have been described in CCR2 gene, associated with various disorders, including cancer . Alternative splicing of precursor mRNAs has been observed for chemokine receptors or their ligands. Splice variants can exhibit different functions and be implicated in pathological conditions, such as cancer. Interaction with glycosaminoglycans (GAGs) is essential to maintain high chemokine levels in the site of release and altered chemokine binding to GAGs can result in impaired leukocytes extravasation [30]. GAG-chemokine interactions also influence the chemokine pattern and, consequently, the leukocyte populations recruited in specific areas. Finally, GAGs promote chemokine oligomerization preserving them by proteolytic cleavage and modulating chemokine-receptor linking [31]. Proteolytic cleavage can occur at either N- or C-terminal region by several proteases [32], including metalloproteases [33], dipeptidyl peptidase 4 (DPP4) [34] or cathepsin B[35]. Cleaved chemokines can display either reduced or increased activity, or different receptor selectivity. Inactivation of chemokines through proteolytic cleavage may be an efficient mechanism adopted by cancer cells to evade immune response [36], as recently demonstrated for CXCL9-11 and CX3CL1 [37]. Other post-translational modifications of chemokines and their receptors include O- and N-glycosylation, citrullination, ubiquitination, sulfation, nitration and nitrosylation . These processes have been shown to affect protein localization, stability and clearance, as well as their chemotactic properties .

Aberrant expression of chemokine ligands and receptors has been observed in several tumors, concurring to altered chemokine functions that contribute to tumorigenesis, sustained by inactivation of tumor suppressor genes, constitutive activation of transcription factors or deregulation of oncogenes regulating chemokines [38]. Indeed, in many tumors a constitutive activation of nuclear factor-κB (NF-κB) is associated with expression of chemokines that promote carcinogenesis [39]. Hypoxic conditions frequently occurring in tumor microenvironment lead to overexpression of chemokine ligands and receptors, both in cancer and stromal cells[40][41]. Cancer metabolism represents an additional element in chemokine regulation. Aerobic glycolysis and lactic acid were reported to induce NF-κB activity, and to increase CXCL8 expression and angiogenesis in breast and colon cancer [42]; ROS release has been associated with overexpression of CXCL14 and enhanced invasion and motility [43].

Alterations in the chemokine system are implicated in many aspects of tumorigenesis, as depicted in Figure 2 and listed below. 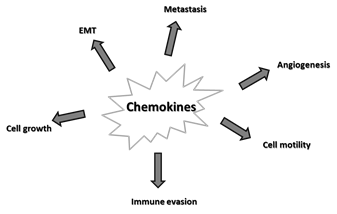 Most chemokine/GPCRs sustain cancer cell survival and proliferation, which are mainly mediated by activation of mitogen-activated protein kinases (MAPKs) [44][45] and PI3K/Akt [46] pathways. In contrast, some chemokine systems can transduce inhibitory signals, e.g., CCR1 [47] or CCR5 [48].

The CXCL8/CXCR1 system has been frequently associated to EMT [49][50][51]. Among atypical receptors, CXCR7 (ACKR3) has been reported to induce EMT and sustain tumor development in bladder cancer [46].

A high variety of chemokines directly or indirectly affect angiogenesis, with positive or negative actions. Angiogenic effects have been reported for CXCL1–3, CXCL5–6, CXCL8, CXCL12, CCL2, CCL11 and CCL16 [52][53]. In general, chemokines displaying the ELR motif, which allows leukocytes to roll on activated endothelium and migrate to the site of injury, are angiogenic [54]. Angiogenesis can be mediated by the expression of pro-angiogenic factors (such as vascular endothelial growth factor (VEGF), platelet derived growth factor (PDGF) and others), or directly promoting endothelial cell recruitment and proliferation. Alternatively, these chemokines can recruit immune cells, as neutrophils, dendritic cells (DCs), myeloid derived suppressor cells (MDSCs) and TAMs [55][56][57] able to secrete angiogenic factors [58][59]. MDSCs and TAMs can even adopt endothelial cell features, contributing to vessel formation [60].

Changes induced by chemokines and their receptors on endothelium are crucial for cancer cell migration, invasion and metastasis. Chemokines released by the tumor microenvironment (TME) increase vessel permeability, promoting intra/extravasation and migration of malignant cells expressing the appropriate receptors and driving them to distant organs [61]. A primary role is played by TAMs, whose recruitment/activation is mainly mediated by CCL2, although other proteins, as CCL3, CCL5, CCL8 [62] or CCL18 can be also effective. Some of these molecules, e.g., CCL3, CCL8, CCL22, further sustain chemokine secretion, thus favoring the accumulation of pro-metastatic immune cells [63].

As mentioned above, many tumors express proteinases able to process and inactivate chemokines, thus impairing leukocyte recruitment and host defense . Cancer cells, as well as the diverse cell types of the surrounding stroma, produce cytokines and chemokines, such as CXCL5 and CXCL8 that induce neutrophil recruitment and phenotypical transition into pro-tumorigenic MDSCs [64][65][66]. In the TME, MDSCs exert pro-cancer actions secreting soluble factors able to suppress TIL trafficking and anti-cancer activity [67][68].

Chemotactic factors released by both tumor and stromal cells contribute to recruitment and activation of TAMs [77]. Soluble mediators also induce the switch toward the M2 macrophage phenotype, although M1 and M2 features can often coexist [78]. Recently, Raggi et al. [19] have shown that CCA stem-like cells (CSC) can be involved in recruitment of circulating monocytes and their differentiation into TAMs. These CSC-associated TAMs co-express M1- (CXCL9 and CXCL10) and M2-related (CCL1chemokines, suggesting that diverse TAM subpopulations can coexist in the TRS, displaying different phenotype and functions.

An in depth analysis of the main chemokine systems involved in biliary malignancies is presented in the  review. They are summarized in Table 1.

Table 1. Major chemokines and their receptors involved in CCA biology.

A deep understanding of chemokine-induced molecular cascades implicated in CCA biology could be helpful to develop novel approaches to complement surgery and chemotherapy. Moreover, by interfering with pro-inflammatory, -angiogenic and -fibrogenic chemokine pathways, chemokine-based treatments might even contribute to reduce the risk to develop CCA in patients with chronic liver diseases. Understanding the roles of CCA chemokine associated molecular mechanisms could be crucial to identify predictive and prognostic biomarkers.