Glycosylation extends the functional diversity of proteins and lipids tremendously. It is one of the most complicated posttranslational modifications, which is added in the endoplasmic reticulum after the folding of glycoproteins or build-up of glycolipids. Thereby, proteins and lipids are elongated by various saccharides leading to high glycan diversity. The added saccharides mainly contribute new functional properties related to complex cell-cell and cell-matrix interactions [1]. Here, sialic acids (Sias) play a unique role. While Sias are displayed on the glycocalyx of few pathogens, such as Campylobacter jejuni and Neisseria spp. [2], they are abundantly present on most extracellular proteins and lipids in mammals. Sias mostly form terminal caps on the glycoconjugates of the mammalian glycocalyx. In addition, mammals have a huge repertoire of immune receptors to recognize Sias in conjunction with the underlying structures. Therefore, Sias have been introduced as essential determinants of self-recognition by the immune system [3]. Particularly, the innate immune system has developed several receptors for recognition of Sias on glycoconjugates as self-patterns. Both complement regulator factor H (CFH) and Sia-binding immunoglobulin-like lectins (SIGLECS) have been recognized as sensors of Sia-containing self-patterns [4][5].

Sias are nine carbon monosaccharides. They form the terminal caps on the glycocalyx of cell surfaces and secreted glycoproteins of vertebrates [6]. There are three main types of Sias in vertebrates, namely N-acetylneuraminic acid (Neu5Ac), N-glycolylneuraminic acid (Neu5Gc), and deaminoneuraminic acid (Kdn). While Neu5Ac is the most abundant Sia in humans, Neu5Gc and Kdn only are detected as trace amounts in human tissue, most likely derived from food sources [7][8][9][10]. The three major Sias are further subject to a number of modifications, such as methylation, sulfation, lactylation, acetylation, and lactonization and form a diverse family consisting of more than 50 members with different structures [11]. Sias are highly abundant on the surface of nervous and immune cells of mammals. For example, Sias have an estimated concentration of more than 100 mM at the surface of a lymphocyte [12].

The biosynthesis of Sia takes place in the cytosol and involves four steps and three enzymes. Among the three enzymes, the bifunctional glucosamine (UDP-N-Acetyl)-2-epimerase/N-acetylmannosamine kinase (GNE) is one rate-limiting enzyme [13]. GNE participates in the initial two steps of Sia biosynthesis. After catalyzing the conversion from uridine diphosphate N-acetylglucosamine to N-acetyl-D-mannosamine (ManNAc), GNE further phosphorylates ManNAc to form N-acetyl-mannosamine 6-phosphate (ManNAc-6-P). ManNAc-6-P is then condensed and dephosphorylated to generate Neu5Ac by N-acetylneuraminic acid synthase and N-acetylneuraminic acid phosphatase [14]. The Neu5Ac is then conjugated with cytidine 5′-monophosphate (CMP) to form active CMP-Neu5Ac by the enzyme cytidine monophosphate N-acetylneuraminic acid synthetase in the nucleus [15]. Subsequently, sialyltransferases transfer Sias to various molecules terminated with a galactose (Gal), an N-acetylgalactosamine (GalNAc), or another Sia residue. This step leads to the biosynthesis of Sia-containing glycoconjugates and oligosaccharides [16]. There are 20 types of sialyltransferases in humans that conjugate the Sia molecule Neu5Ac to the acceptor sugar (Gal, GalNAc, Neu5Ac) using a defined linkage (α2,3-, α2,6-, α2,8-) between the Sia residue and the acceptor sugar. Moreover, Sias can form homopolymers with different degrees of polymerization via intersialyl linkages. For instance, polysialic acid (polySia) is a homopolymer of α2,8-linked Neu5Ac monomers with a degree of polymerization between 10 and around 200 [17]. Thus, a huge number of glycoconjugates can be generated. 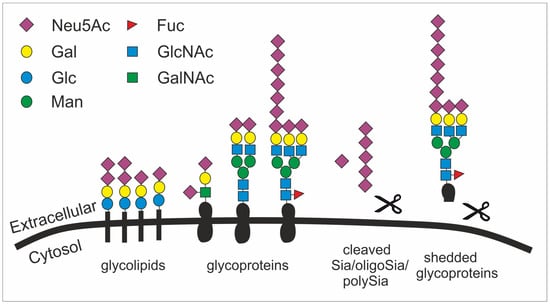 Figure 1. The structural diversity of the glycocalyx is fundament to many cellular processes. Sialic acid is mainly found as terminal saccharide on the glycocalyx that is formed by glycolipids (e.g. gangliosides) as well as sialylated and polysialylated glycoproteins (e.g. polySia-NCAM). Glycoproteins can be shedded (here simplified by showing a scissor) and released as sialylated molecules (e.g., forming the mucus). Sialic acids (Sia), oligosialic acids (oligoSia) and polysialic acids (polySia) can be cleaved by sialidases (scissor) or oxidative processes (scissor) and trapped together with growth factors in the extracellular matrix. Neu5Ac, N-acetylneuraminic acid; Gal, galactose; Glc, glucose; Man, mannose; Fuc, fucose; GlcNAc, N-acetylglucosamine; GalNAc, N-acetylgalactosamine.

Given their abundance and diversity on all vertebrate cell surfaces as the terminal cap, it becomes obvious that Sias fulfill multifarious roles, such as in microdomain formation [18], cell adhesion [19], tissue homeostasis [20], immune cell modulation [21], cell migration [22], chemokine sensing [23], and growth factor retention [24] (figure 1). Particularly, the outermost position of Sias with multiple functional groups allows them to have interactions with other molecules, mainly glycoproteins called lectins. These interactions involve hydrogen bonds, salt bridges, and non-polar interactions. However, the affinity of such interactions between one protein (e.g. a lectin) and the respective glycan is relatively low and often requires multivariant binding between several glycans and protein molecules [25].

Interestingly, some bacteria can use this self-recognition system as camouflage by generating analogues of human sialoglycans. For example, α2.8-linked polySia is used by several bacteria as a neuro-invasive determinant [26][27] and thus could escape host immune attack via inactivating the complement system and silencing innate immune cells via SIGLEC-11. The polySia capsules of Escherichia coli K1 (E. coli K1) specifically restrict alternative complement pathway activation [28], while those of serogroup B Neisseria meningitides help the bacteria to escape elimination by normal human serum [29]. However, the mechanism of how polySia modulates the complement cascade is not fully understood yet. Furthermore, polySia is used by E. coli K1 for immune evasion by a second receptor-mediated mechanism: the human-specific pathogen E. coli K1 uses its polySia capsule as a protective molecular shield to escape immune defense by engaging SIGLEC-11 [30].