Nature has long been the most important source of therapeutics. The use of poultices and mixtures of plant material to treat infections goes back to the early bronze age civilizations[1]. Building on the prior knowledge acquired, early medicine, pharmacology and chemistry started to develop therapeutics by studying nature. For example, extracts of willow bark (genus Salix), containing salicylic acid, which was identified to be the bioactive molecule present in the bark in 1828, were already used by Sumerians and Egyptians to treat inflammation and pain. In 1852 acetylsalicylic acid was first synthesised and in 1899, Bayer patented it as aspirin[2]. Ever since then, many terrestrial organisms and in particular plants have been sought for use as natural products. It was only around the 1970s, that attention was first given to the ocean as a source of useful natural products. As the oceans cover most of the Earth’s surface, they are home to a substantial portion of the world’s biodiversity[3] which lives in distinctive and varied conditions and has evolved through a long period of metabolic adaptations. When exploration of the ocean’s biodiversity and metabolic richness began, it resulted in the discovery of thousands of structurally unique bioactive marine natural products[4].

Initially, the exploitation of marine wildlife for natural bioactive products focused on a small number of organisms which included sponges, molluscs, tunicates and macroalgae[5]. These were shown to produce a very diverse range of unique molecular structures, like halogenated terpenes, polyketides and prostaglandins[6][7][8][9]. This diversity of bioactive structures is considered to be part of the defence, survival and predatorial strategies employed by these organisms, such as, for example, sponges, which are sessile, soft-bodied organisms, lacking morphological defences like biological armature or spines[10]. Thus, these organisms appeared to be a great source for the discovery of novel bioactive molecules. However, the bioactive molecules produced by these organisms can be present in quite small amounts. For example, halichondrin B (1) (Figure 1), a macrolide first isolated from Halichondria okadai that has potent anticancer activity, impeding mitotic division by targeting tubulin[11], is present in concentrations as low as 400 µg per kg wet weight of tissue of Lissodendoryx sp.[12]. Due to their low concentrations of bioactive molecules the use of these organisms poses environmental problems, because high quantities of organisms would be needed to produce enough molecules to even begin preclinical trials[13]. Yet, its structure inspired a synthetic analogue, eribulin mesylate, which is now used in breast cancer and lipocarcinoma treatment[14]. As such, sponges, molluscs, tunicates and macroalgae still remain relevant sources of new marine natural products[15].

Figure 1. Bioactive metabolites isolated from marine organisms. Halichondrin B (1), a macrolide first isolated from H. okadai but also present in other sponges. Bryostatin 1 (2), which belongs to a family of polyketide macrolides first identified in the marine bryozoan B. neritina. Salinosporamide A (3), is a proteasome inhibitor isolated from bacteria from the genus Salinospora and is in phase III clinical trials for the treatment of multiple myeloma.

The exploitation of other sources of bioactive marine organisms, mainly microorganisms, has also led to the discovery of new promising leads. Indeed, some of the molecules associated with macroorganisms such as sponges, may have their origin in associated microorganisms[16]. This may be the case of bryostatins, found in the marine bryozoan Bugula neritina[17]. The bryostatins, exemplified by bryostatin 1 (2) are polyketide macrolactones with neurological and anticancer properties that work by modulating the activity of the protein kinase C family and they were first isolated from this bryozoan in 1982[18]. Yet, these macrolactones appear to be synthesised by a group of PKS genes of bacterial origin, indicating that bryostatins are produced by a bacterium[19] [56].

Marine microorganisms, like members of Actinobacteria, Proteobacteria, Firmicutes, Cyanobacteria, fungi and dinoflagellates, have shown to be great reservoirs of bioactive molecules[15]. Yet, even though initial predictions pointed to an immediate increase in the number of natural products discovered with the shift in focus from macroorganisms to microorganisms, this did not occur[20]. However, advances in the isolation of novel taxa, provided a boost in the discovery of novel bioactive molecules. Analysis of the literature reveals an increase in the number of new molecules discovered in all microorganisms from 2014 to 2018[15], with a special emphasis on fungi and bacteria. Members of the genus Salinospora (Actinobacteria) are examples of bacteria that lead to the discovery of salinosporamide A (3)[21]. This molecule has a potent cytotoxic activity due to a unique functionalisation of the core-fused γ-lactam-β-lactone bicyclic ring, which contributes significantly to its activity[22]. Salinosporamide A is now in phase III clinical trials for the treatment of multiple myeloma under the brand name Marizomib[23].

Although salinosporamide A is the best example of the potential present in bacteria, many novel molecular structures are discovered each year. In fact, in 2016, 179 new natural products of marine bacterial origin were discovered[24], in 2017, the number rose to 242[25] and in 2018 a total of 240 new molecules were reported[15]. The upwards trend seen in the number of discovered molecules and the remarkable chemical diversity displayed, which ranges from peptides, siderophores and polyketides to esters, macrolactones, quinones and terpenes, shows the bacterial potential for the discovery of novel active principles.

Bacteria are promising sources for novel antimicrobial natural product discovery. This is primarily due to two factors. One is their variable and malleable metabolism[26] and the other is their competitive pressure for resources against other microbes. Several recent examples of natural products from marine bacteria are provided below. The novel molecule bacicyclin (4) (Figure 2), which is a cyclic peptide, was isolated from a Bacillus sp. strain BC028 isolated from the common mussel (Mytilus edulis)[27]. It displays antibacterial activity against E. faecalis and S. aureus with minimal inhibitory concentration (MIC) values of 8 and 12 µM, respectively, and can help in the design of analogues with increased antibiotic efficacy[27]. Anthracimycin B (5), a polyketide with powerful anti-Gram-positive bacteria activity that was obtained from a marine-derived Streptomyces cyaneofuscatus M-169, has expanded the knowledge of how the methyl group at C-2 of anthracimycins plays a role in its antibacterial effect[28]. Taromycin B (6), a lipodepsipeptide with potent activity against methicillin-resistant S. aureus and vancomycin-resistant E. faecium which was isolated from the marine actinomycete Saccharomonospora sp. CNQ-490, provides a promising start for the development of novel antibacterial scaffoldings[29]. Janthinopolyenemycin A (7) and B (8) are also polyketides and the first examples of molecules of their structural type. Janthinopolyenemycins were isolated from the proteobacterium Janthinobacterium spp., strains ZZ145 and ZZ148, and have activity against Candida albicans[30]. Streptoseomycin (9), a macrolactone isolated from the actinobacterium Streptomyces seoulensis A01, has specific activity against microaerophilic bacteria, specially the pathogen H. pylori[31]. This restricted activity makes streptoseomycin a good starting point for the discovery of antibiotics for the treatment of H. pylori infections. The polyketides ansalactams B (10), C (11) and D (12) are highly modified ansamycins that show weak and mild anti-methicillin-resistant S. aureus and were identified in cultures of Streptomyces sp. CNH189, isolated from marine sediments. Ansalactams B and D are cyclic polyketides with similarities to ansalactam A. However, ansalactam D shows evidence of an uncommon oxetane ring. Ansalactam C is an open polyketide chain resulting from a Baeyer–Villiger-type oxidation[32]. Micromonohalimanes A (13) and B (14) are rare halimane-type diterpenoids isolated from the actinobacterium Micromonospora sp. WMMC-218. Micromonohalimane A displays a very weak inhibitory effect on methicillin-resistant S. aureus while micromonohalimane B displays moderate bacteriostatic activity against it. Xestostreptin (15) is a modified diketopiperazine isolated from Streptomyces sp. S.4, resulting from the condensation of the aminoacids threonine and alanine[33]. Xestostreptin shows weak activity against the malarial agent P. falciparum. Two macrolides, branimycins B (16) and C (17) were identified from a fermentation of the actinobacterium Pseudonocardia carboxydivorans M-227, isolated from deep sea water[34]. Branimycin B shows moderate antibacterial activity against Gram-positive bacteria, while branimycin C displayed moderate antibacterial activity against Gram-negative bacteria. 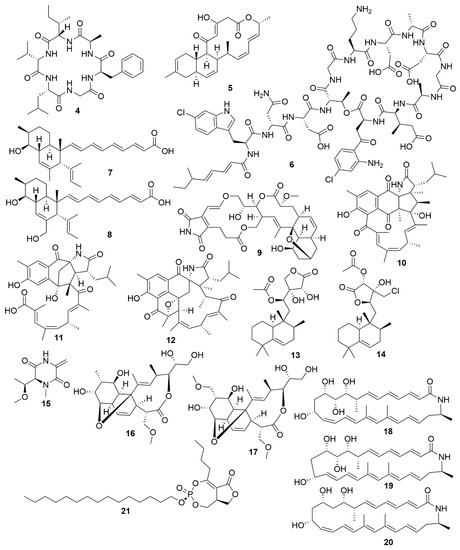 Utilizing a genome-assisted discovery strategy, three macrolactams, lobosamides A (18), B (19) and C (20), were isolated from Micromonospora sp. RL09-050-HVF-A[35]. Lobosamides A and B showed bioactivity against the microbial agent of African trypanosomiasis, Trypanosoma brucei in low concentrations. However, lobosamide C was not bioactive. Schulze and colleagues[36] also identified salinipostins A-K bicyclic phosphotriesters isolated from the actinobacterium Salinispora sp. RLUS08-036-SPS-B with potent and selective activity against P. falciparum. The salinipostin scaffold considerably differs from any of the known antimalarial compounds, representing a novel lead structure in the development of therapeutics for malaria. Experiments with salinipostin A (21), the most bioactive of the 11 salinipostins, indicate that it exhibits growth stage-specific effects and no apparent resistance could be identified in parasite populations. A hybrid peptide-polyketide, mollemycin A (22) (Figure 3) was isolated from the marine bacterium Streptomyces sp. CMB-M0244 and shows potent antimalarial and broad antibacterial activities[37]. Actinosporin A (23) is a glycosilated polyketide which shows antiparasitic activity against T. brucei and was isolated from a marine sponge associated Actinokineospora sp. EG49[38]. Likewise, actinosporin B, was also isolated but showed no bioactivity, suggesting that actinosporin A is acting selectively against the parasite. The linear lipopetides, gageopeptides A-D (24–27), gageotetrins A–C (28–30) and gageostatins A–C (31–33) were isolated from the marine Bacillus subtilis 109GGC020. These lipopetides showed a range of different antimicrobial bioactivities, with gageostatins A, B and C all showing good antimicrobial activity and moderate cytotoxic activity to lung cancer cell line NCI-H23[39]. Gageotetrins A, B and C showed potent antimicrobial bioactivities but not cytotoxic effect on human myeloid leukaemia K-562[40]. Furthermore, gageopeptides A, B, C and D all showed good antifungal and moderate broad antibacterial activity, while not showing cytotoxicity to human myeloid leukaemia K-562 and mouse leukemic macrophage RAW 264.7 cell lines[41]. 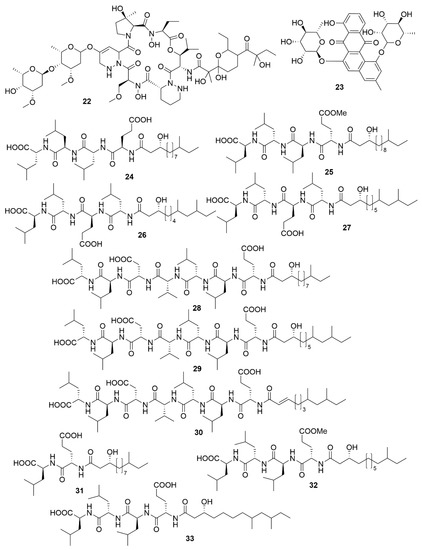 It is estimated that as many as 1031 viruses inhabit the oceans[42], with concentrations ranging from 3 × 106 viruses mL−1 in deep sea waters to 108 viruses mL−1 in coastal waters[43], many of which are bacteriophages. Consequently, marine bacteria are subjected to evolutionary pressure to develop defences against viral attacks. As such, marine bacteria may be great reservoirs of antiviral leads.

A number of examples of marine bacterial natural products with antiviral bioactivities have been recently reported. Three novel abyssomicin monomers, neoabyssomicins D (34) (Figure 4), E and A2 and two dimers—neoabyssomicins F (35) and G (36)—were isolated from the marine Streptomyces koyangensis SCSIO 5802, with neoabyssomicin D showing moderate anti-herpes simplex virus activity, and neoabyssomicins F and G showing low activity against vesicular stomatitis virus[44]. Streptomyces sp. OUCMDZ-3434, isolated from the marine alga Enteromorpha prolifera, was shown to produce five new phenolic polyketides[45]. Of these molecules, wailupemycin J (37) and (R)-wailupemycin K (38) proved to be bioactive against the influenza A virus (H1N1). The indolosesquiterpenoids xiamycins C (39), D (40) and E (41) were isolated from the marine-derived Streptomyces sp. #HK18, and showed strong inhibitory effect against the coronavirus porcine epidemic diarrhoea virus[46]. As such, xiamycins may provide useful leads in the development of antivirals with broader spectrum activity against other coronaviruses. 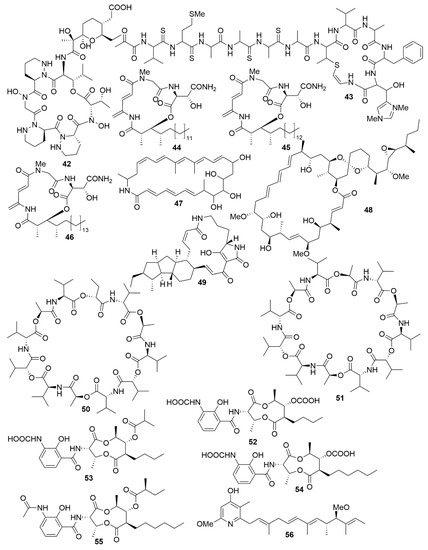 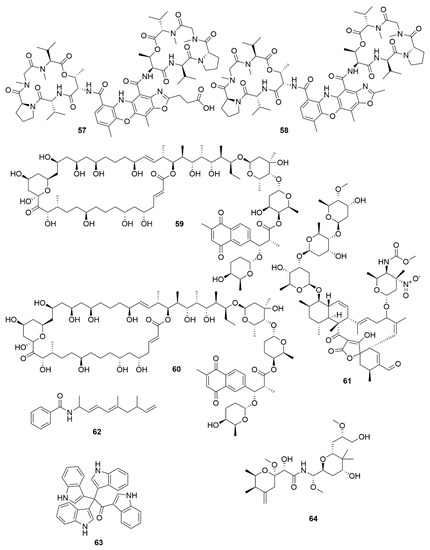 Figure 6. Examples of recently isolated cytotoxic natural products from marine bacteria. Neo-actinomycin A (57) and Neo-actinomycin B (58) are chromopeptides from Streptomyces sp. IMB094. PM100117 (59) and PM100118 (60) are macrolides isolated from S. caniferus GUA-06-05-006A. Lobophorin I (61), a spirotetronate isolated from Streptomyces sp. 1053U.I.1a.3b. Haliamide (62), a hybrid of a polyketide synthase from H. ochraceum SMP-2. Tetra(indol-3-yl)ethenone (63), an indole isolated from P. denitrificans BBCC725. O-Demethylpederin (64), a polyketide with a tetrahydropyran-core from Labrenzia sp. PHM005.

Two new macrolides, PM100117 (59) and PM100118 (60) were isolated from a marine Streptomyces caniferus GUA-06-05-006A[56]. Both PM100117 and PM100118 show potent cytotoxic effect on human breast adenocarcinoma (MDA-MB-231), human lung carcinoma (A549) and human colorectal carcinoma (HT-29) cell lines. The study of a symbiotic Streptomyces sp. (strain 1053U.I.1a.3b) of cone snails lead to the isolation of two lobophorins, H and I[57]. Lobophorins are a large family of spirotetronates with antimicrobial and cytotoxic bioactivities. Of these, lobophorin I (61) showed potent cytotoxic activity against human T-cell leukaemia cell line CEM-TART.

All these examples show the great potential displayed by marine bacteria which reveals the extraordinary chemical diversity of their metabolism. When analysing the bioactive bacteria and their taxonomic groups, Actinobacteria proved to be the most prolific and diverse producers (Tables 1–3). However, ignoring other less studied phyla denies access to valuable chemical diversity, which is essential in the drug discovery process. Moreover, marine bacterial metabolites have shown to have potential as treatment in both human and animal pathologies. Thus, marine bacterial natural products have great significance under the “One Health” framework.