Micro Combined Heat and Power (µCHP) systems in a DG infrastructure can reduce a building’s primary energy consumption, reduce carbon footprint, and enhance resiliency. The simultaneous production of electrical and thermal energy from a single fuel source at a high overall energy efficiency can reduce primary energy consumption while lowering greenhouse gas (GHG) emissions. A comprehensive overview of various modeling approaches adopted by international researchers is presented. The key objective is to present the state-of-the-art models and approaches while identifying opportunities for further refinement to expand the capabilities of such models for versatile applications. 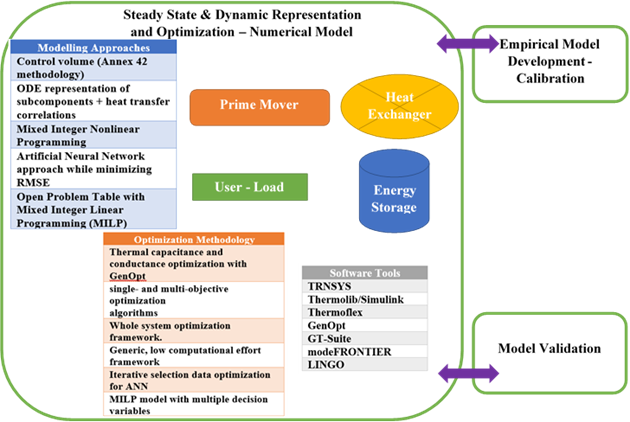 The decentralized aspect of µCHPs can potentially reduce distribution losses while reducing the peak load burden on central power generation plants. Economic and population growth are the primary drivers of rising electricity demand and it is bound to increase further, especially as electric vehicles become commonplace. In fact, CHP technology is gaining ground as an acceptable energy provider at university campuses, industrial facilities, and as backup generation, according to a recent study [1]. The key market drivers contributing towards the growth of CHP technologies include lower operating costs, environmental regulations, resiliency, policy support, reliability, and utility interest. CHP reduces the burden on electric grid as well as the need for new transmission and distribution infrastructure while utilizing domestically available clean energy resources such as biomass and natural gas. Some of the major hurdles for the mass deployment of CHPs include value proposition to the utilities, user awareness, permitting and siting constraints, and general market uncertainties.

Cogeneration technologies including those of industrial and micro scale have been analyzed for their applications in buildings dating back to late 20th century [2]. The authors identified the hurdles for rapid deployment and adoption by utilities, industries, and governmental regulatory bodies. Suggestions were made for accelerating the implementation of these devices with a primary focus on research, fuels, economics, environment, industry-utility interface, and regulation. Some of these focal points are still relevant even though the suggestions were made almost four decades ago!

Given the significant potential of µCHP in buildings, we present in this paper a review of prior work in modeling µCHPs that use internal combustion engine (ICE) as the primary mover. Integration of these µCHP units as primary building energy resources requires good understanding of their performance in meeting the dynamic energy needs (thermal and electric loads) of the building influenced by users, seasons, climate, and the overall interaction with the grid. The key objective is to present the state-of-the-art thermodynamic models and their advantages, while identifying opportunities for further refinement to expand the capabilities of such models for versatile applications and ability to accept different prime power ICE based µCHP products.

Based on the comprehensive review of past two decades of work, it can be concluded that the application of µCHP has been shown to reduce primary energy consumption coupled with environmental benefits associated with lower GHG emissions. However, the true savings were shown to be greatly influenced by the control mode adopted: thermal load following vs. electrical load following. Transient heat and power demand variations influenced the overall effectiveness significantly. Therefore, accurate prediction of µCHP output under steady-state as well as transient operating conditions is critical to developing µCHP control schemes and determining the economic viability of their applications. Several researchers developed and tuned the models and approaches to predict the behavior of specific equipment and their integration into buildings. Due to the complexity of the physical processes that take place to produce power in ICE, first principle modeling of µCHP is impractical to implement for building applications. It would require level of details that are usually not available to users. Therefore, all µCHP energy simulation models fall into either grey-box or black box category. Both categories require the availability of performance data of the µCHP system under investigation for calibrating the parameters of the model. Grey-box models are more versatile. The same set of equations can be directly used for different µCHP systems and can be easily modified to accommodate differences in system topography. Black-box models on the other hand are easier to develop. However, a black-box model architecture that is developed for certain system may not apply to a different system.

A summary of the modeling strategies, optimization approaches, benefits and advantages of different studies discussed in Section 2 is outlined in the table below:

Based on the reviewed work, the authors suggest a closer look in to the following topics to help cement the µCHP as an efficient and resilient energy source to address the growing needs of the population driven by economy and new energy consumers entering the marketplace (e.g., electric vehicles). Thorough consideration of the following aspects in the model is recommended for enhancing the reliability and predictability of a global µCHP model:

The last two decades developing reliable mathematical models of µCHP systems, their application in real world scenarios and understanding the complexities associated with integration into the building environment. Development opportunities surrounding the modeling of prime movers and their integration with energy storage technologies were identified by several researchers. Publically available software platforms have evolved to design, improvise, and develop reliable cogeneration simulation models which will aid in further development of reliable, efficient, and resilient µCCHP products.

Energy utilization in buildings is a challenging subject, influenced by the building’s thermal and electrical demands, and primarily impacted by mismatch between the energy demand and supply. As a result, energy storage must be an integral part of the µCHP system to fully utilize the benefits of distributed generation. A fully integrated optimal µCHP configuration is underexplored as there are numerous possible solutions, which leads to the need to utilize software programs that help design the ideal system.