Consider n data sources with their data represented, respectively, by N1, N2,...,Nn dimensional vectors, such that

, with their respective covariances as

. Furthermore, the estimates are assumed to be correlated with cross-covariance

. The mean estimates and their covariances together with their cross-covariance in

are then transformed to an extended space of

along with the linear constraint between the two estimates:

are constant matrices of compatible dimensions. In the case where

. Figure 1b illustrates schematically the fusion of

in the extended space based on the proposed method. Fusion takes place by finding the point on the constraint manifold that represents the minimum weighted distance from

, where the weight is given by 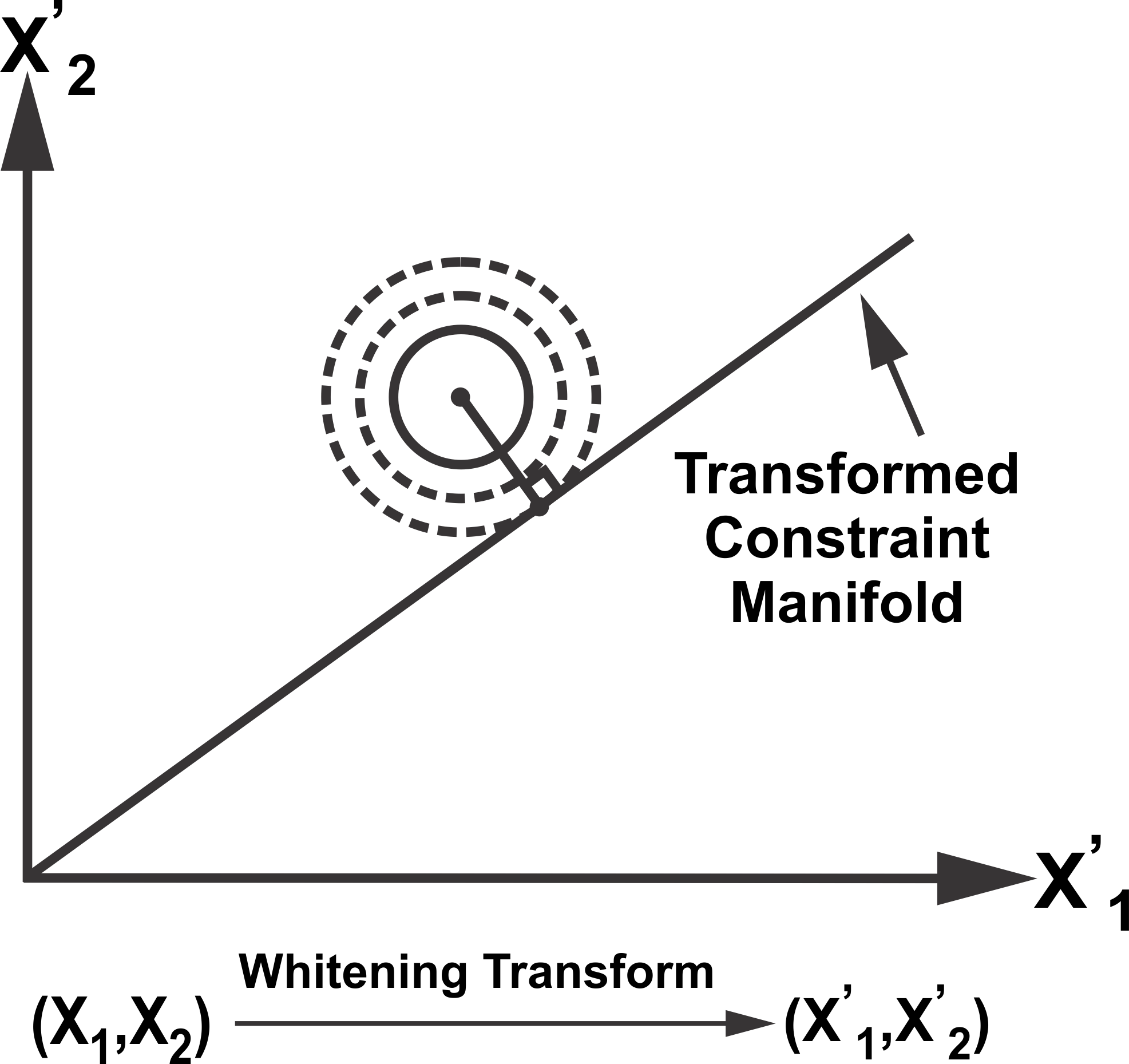 To find a point on the constraint manifold with minimum weighted distance, we apply the whitening transform (WT) defined as,

are the eigenvalue and eigenvector matrices of

to satisfy the constraints between the data sources in the transformed space as illustrated in Figure 2. Inverse WT is applied to obtain the fused mean estimate and covariance in the original space,

is the orthogonal projection matrix. Using the definition of various components in (2) and (3), a close form simplification can be obtained as,

Due to the projection in extended space of

, (4) and (5) provide a fused result with respect to each data source. In the case where

estimate the same entity, that is,

, the fused result will be same for the two data sources. As such, a close form equation for fusing redundant data sources in

with their respective covariances

, (6) and (7) can be used to obtain the optimal fused mean estimate and covariance with

For fusing correlated estimates from

redundant sources, the CPF is equivalent to the weighted fusion algorithms [3][4], which compute the fused mean estimate and covariance as a summation of weighted individual estimates as,

. Equivalently, the CP fused mean and covariance can be written as,

. In the particular case of two data sources, the CP fused solution reduces to the well-known Bar-Shalom Campo formula [5],

Although equivalent to the traditional approaches in fusing redundant data sources, the proposed method offers a generalized framework not only for fusing correlated data sources but also for handling linear constraints and data inconsistency simultaneously within the framework. 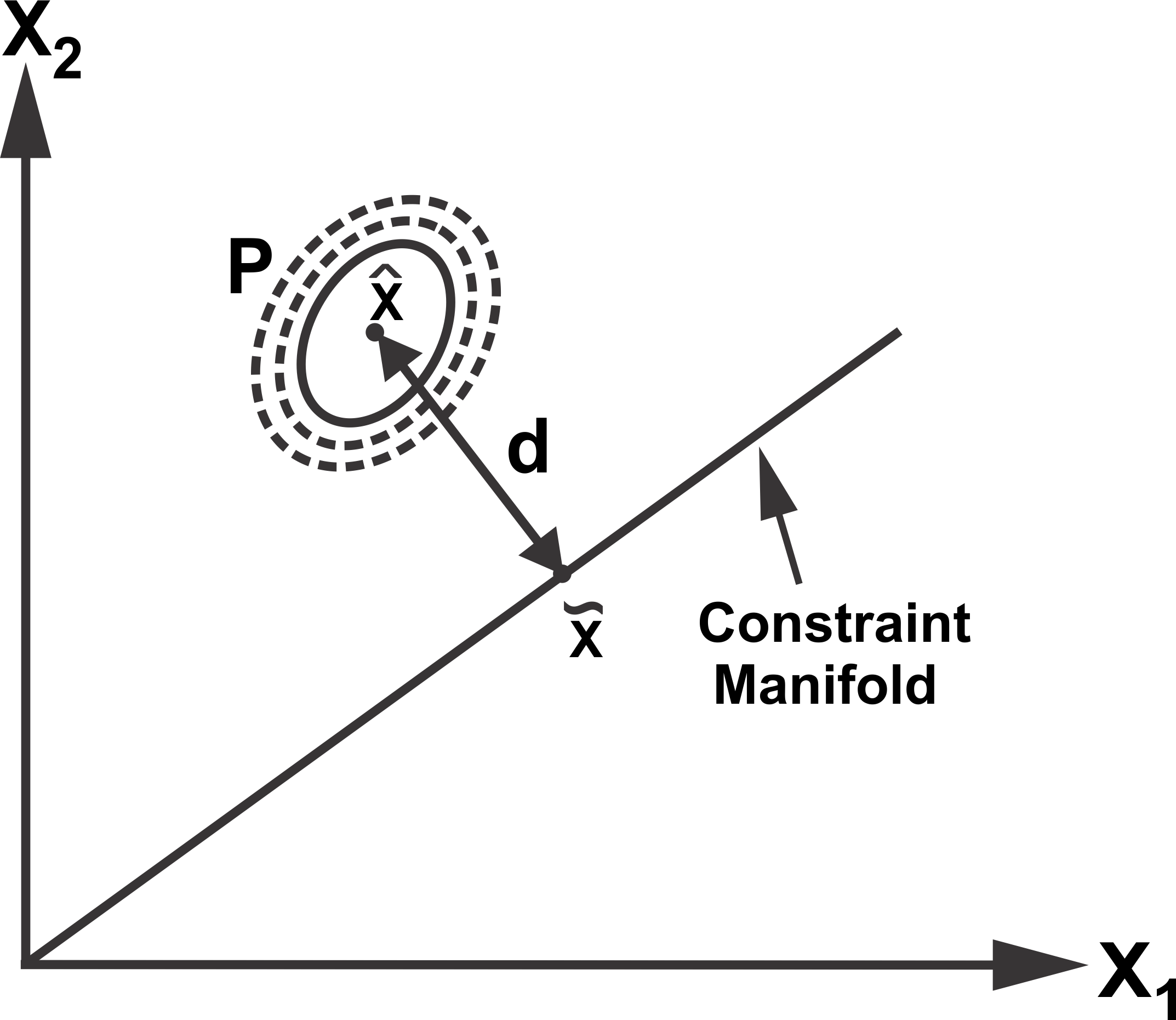 Figure 3. The distance of the multi-variate distribution from the constraint manifold.

Consider the joint space representation of

is the dimension of the state vector. The distance

can be computed as,

is the point on the manifold and can be obtain by using (4). The

distance follows a chi-square distribution with

degrees of freedom (DOF), that is,

∼χ2(N0). A chi-square table is then used to obtain the critical value for a particular significance level and DOF. A computed distance

less than the critical value mean that we are confident about the closeness of sensor estimates and that they can be fused together to provide a better estimate of the underlying states. On the other hand, a distance

greater than or equal to the critical value indicate spuriousness of the sensor estimates.

is the system matrix,

is the input matrix,

is the input vector and

is the state vector. The system process noise

are assumed to be correlated with cross-covariance

is known to be constrained as,

≠ 0, the state space can be translated by a factor

. After constrained state estimation, the state space can be translated back by the factor c to satisfy

. Hence, without loss of generality, the

case is considered for analysis here. The matrix

is assumed to have a full row rank.

The CPF incorporates any linear constraints among states without any additional processing. Let us denote the constrained filtered estimate of the CPF  as

as the predicted state estimate based on the underlying system equation. The extended space representation of the state predictions and measurements of multiple sensors can be written as,

Then the CPF estimate in the presence of linear constraints among states can be obtained using (4) and (5) as,

matrix is the subspace of the constraint among the state prediction

as well as linear constraints

among state variables. The subspace of the linear constraint among state prediction and sensor measurements can be written as,

is a combination of

in the extended space provide the filtered or fused estimate of state prediction and sensor measurements as well as completely satisfying the linear constraints among the states directly in one step.