Flood occurrence is increasing due to escalated urbanization and extreme climate change; hence, various studies on this issue and methods of flood monitoring and mapping are also increasing to reduce the severe impacts of flood disasters. The advancement of current technologies such as light detection and ranging (LiDAR) systems facilitated and improved flood applications. Since the conventional methods cannot produce high-resolution digital elevation model (DEM) data, which results in low accuracy of flood simulation results, LiDAR data are extensively used as an alternative. This review aims to study the potential and the applications relevant to flood studies from a LiDAR-derived DEM perspective. It also provides insight into the operating principles of different LiDAR systems, system components, and advantages and disadvantages of each system. Furthermore, the challenges and future perspectives regarding DEM LiDAR data for flood mapping and assessment are also discussed. This study demonstrates that LiDAR-derived data are useful in flood risk management, especially in the future assessment of flood-related problems.

A digital elevation model (DEM) is a predominant source of elevation data due to its simplicity and easy-to-use data [1][2]. DEM provides gridded elevation data in a raster structure that represents the terrain’s surface. DEMs can be generated from many sources such as ground surveys, digitizing existing hardcopy topographic maps, or remotely sensed technology. With the rapid development of remote sensing technology, DEMs generated from this technology are a preferred choice using photogrammetry and interferometric synthetic aperture radar (IfSAR). Another emerging technology is light detection and ranging (LiDAR). The generation of DEM data using the LiDAR system has several advantages over other sources. Moreover, it has the ability to penetrate the ground surface in vegetated and urban areas more reliably than either photogrammetry or IfSAR. Due to these reasons, it became a recent solution for flood-related problems. The ability of LiDAR systems to provide higher-resolution and centimeter-accuracy outcomes diversified their use in wide-ranging applications of flood studies.

2. Fundamentals and system components of LiDAR

LiDAR is an active remote sensing system, which allows the system to operate during daylight or night time, as well as during cloudy conditions [1][2]. A LiDAR sensor that is mounted on platforms such as aircraft and helicopters is known as airborne LiDAR while, LiDAR systems that collect data from the ground are referred to as ground-based LiDAR that can be categorized into static or mobile laser scanning (Figure 1). The development of laser scanning differs by the position of a sensor, i.e., whether an airborne-based LiDAR system or a ground-based LiDAR system. These two systems vary in terms of data acquisition modes, scanning mechanisms, and product accuracy and resolution, with several similarities.

In summary, there are different ways of achieving data acquisition using LiDAR data, including airborne LiDAR and terrestrial LiDAR. Previous studies demonstrated that terrestrial LiDAR data held an advantage over other DEM sources, including airborne LiDAR, as they responded to small-scale topographic features, which were important factors that influenced the flood prediction results. Airborne LiDAR has difficulty in detecting small-scale features that are often not well represented in DEMs, which is the reason why many researchers opted for terrestrial LiDAR to generate a high-resolution DEM. Nevertheless, both LiDAR sensors proved to be able to maintain high accuracy and produce high-resolution data due to their high scanning rates [4] compared to other DEM sources.

3. The importance of DEM accuracy in flood studies

In studies involving the application of remote sensing in floodplain and flood risk assessment, DEMs are used to visualize the interface of floodwater with the elevation of the ground surface. Moreover, DEM is an important indicator in determining the flood inundation and flood depth [5][6][7]. The accuracy of DEM is critical in hydrological modeling as it can affect the discharge values, water depth, and the extent of flood inundation maps [8][9]. In a flat floodplain, a vertical error of 1 m in the DEM leads to an error of 100 km2 in the estimated flood inundation [7]. Hence, accurate and high-resolution DEM data are needed to produce reliable flood mapping, especially in the context of flood simulation modeling.

In flood inundation modeling, DEM resolution and accuracy play an important role in terms of modeling resolution and accuracy. For instance, a low-resolution DEM allows quick model simulations but it simplifies the topographic information that may affect the flood propagation. High-resolution DEM is needed, especially for urban areas, due to the presence of small features such as road curbs and dykes; thus, it is likely that the accuracy of flood simulations can be affected by the resolution of the DEM. Therefore, many researchers carried out studies to see whether coarser DEM resolution decreases the accuracy of the predicted flood inundation extent.

Casas et al. [10] conducted a study on different topographic data sources and resolution on flood modeling. The differences between each DEM were measured in terms of flood model outputs such as water discharge, water level, and flood inundation. Similarly, Ozdemir et al. [11] investigated the impact of using high-resolution terrestrial LiDAR data on water depth, inundation extent, arrival time, and velocity predicted by the flood simulations. It was found that increasing the terrain resolution significantly affected the flood simulation results. The finding demonstrated that fine-resolution DEM can lead to significant differences in the dynamics of flood inundation. In short, a coarser-resolution DEM results in a larger loss of information, while a high-resolution DEM results in excessive computational time.

In summary, the findings from previous studies confirmed that accurate terrain data had a big impact on flood hazard prediction. Results of flood simulations varied in response to different DEM resolutions, which could be associated with the degree of topography representation. It was found that high-resolution DEM can provide relevant and reliable flood modeling results [12]. In contrast, coarser resolutions deteriorate the performance of flood models [13]. The previous studies confirmed that accurate terrain data have a big impact on flood hazard prediction and that the inundation area evaluation increases with coarser DEMs. Hence, a finer model resolution is necessary if the decision-maker is interested in local-scale inundation predictions [14]. Based on previous studies, the researchers suggested that LiDAR data offer high-quality data as an essential input of flood modeling.

The application of LiDAR in supporting many science research activities such as geologic mapping, landslide hazards, and flood risk management cannot be disputed [15]. The number of publications of peer-reviewed research literature recorded in the Scopus database for the past 10 years, from 2010 to 2019, which discussed LiDAR data in flood studies, was determined. The related papers were searched using the boolean “AND” to combine the words “LiDAR” and “flood”, and we sought these words in the abstract, title, and keywords of the documents. This study decided to focus only on research articles and conference proceedings of the related topic to be counted, as presented in Figure 2. 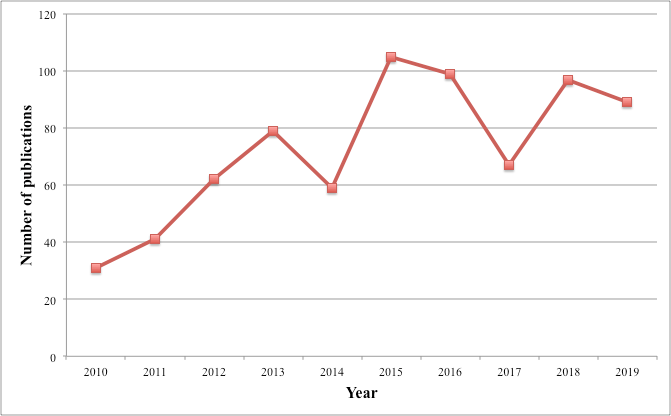 Figure 2. The number of papers that discussed on LiDAR and flood applications by year in the Scopus database.

The graph shows that there was a rapid increase in the rate of publishing papers on LiDAR and flood applications in early 2010, and this increasing trend remained until 2019. There may be various reasons for the increase such as the availability and accessibility of LiDAR technology and the occurrence of flood disasters in the world. Furthermore, the potential of LiDAR technology to provide high-quality data may receive attention from researchers and practitioners, which leads to an increment in LiDAR data applications in multidisciplinary studies, especially in flood applications.

Due to this, LiDAR technology is in demand for creating DEMs for flood-prone areas, especially in urban areas. The application of high-resolution LiDAR data is increasing in developed countries [16]. such as in the United Kingdom, as well as in the United States. Based on the papers that have been reviewed in this study, it is concluded that high-resolution DEMs have a great influence on producing accurate and reliable maps in the field of flood simulations. Using these maps helps in disaster risk reduction and management, especially in identifying specific areas that need to be prioritized for providing appropriate flood risk management measures to be taken to combat flood disaster. Previous studies implied that LiDAR-derived DEMs improve the accuracy of flood parameters; hence, they can help in producing high-quality flood hazard and flood risk mapping.

The frequency of flood disasters all over the world is increasing due to climate change and rapid urbanization. Therefore, studies on flood mapping and monitoring increased with the advancement of current technologies to reduce the impact of flood disasters. LiDAR data acquisitions seem to be a promising approach to solve the problems associated with the inadequate representation of topographic data. Previous studies revealed that LiDAR technology has many advantages, which makes it suitable for flood modeling, particularly in flat areas and complex urban environments. Depending on the spatial scale, LiDAR data offer different advantages for accurate terrain mapping compared to other sources. Moreover, LiDAR could be advantageous to provide information in small-scale flood risk management by having small important topographic features such as dykes, ditches, and levees [17][18][19]. Furthermore, the integration of LiDAR technology with any remotely sensed products may be used to increase the effectiveness of this technology, especially in flood modeling.

However, there are some restrictions in using LiDAR-derived DEM in the context of flood applications. The main drawback of both LiDAR systems is the process of classifying ground from non-ground data for DEM generation, which is needed in simulations of the flood model. Ground surface information is not easily extracted, especially in areas with complex terrain surface and features such as buildings and vegetation [20]. The ground filtering process proves to be a challenging task as it can affect the accuracy of the LiDAR products [21][22]. Filtering problems are expected to be better solved with the evolution of machine learning [20]. In addition, the sensitive response of flood inundation to small changes in topography representation gives rise to several challenges [23]. Collecting small-scale features need a high resolution of DEM data, but the data are rarely available, especially for developing countries. Not all countries can afford to use LiDAR data due to economic constraints. The high cost and the difficulty of processing huge LiDAR datasets could be the main reason why LiDAR data are not used in some developing countries. Even developed countries like the United States and the United Kingdom do not have LiDAR data available for the entire country. Another challenge when using LiDAR data is the need for huge data storage due to the high-point-density data. High-point-density data need a longer computational time to process [24][25]. Nevertheless, the computational time problem may be solved with future advancements in computer technology. Moreover, the LiDAR system cannot penetrate water bodies as its laser beam is absorbed by the water. Therefore, the inaccurate elevation measurement of water-covered areas influences cross-section attributes, leading to inaccuracies in hydrodynamic simulations [26].

Detailed topographic information is a crucial input parameter for flood modeling and monitoring. Flood model simulation results show differences in water depth and inundation when using detailed DEMs, proving that DEM accuracy has a significant impact on flood hazard estimation [23][27]. Therefore, the need for high-resolution DEM explains the interest in exploring new technology to generate detailed elevation data. In this review, the promising applications in numerous flood studies demonstrate that the LiDAR system is capable of offering high-density and high-resolution DEM data to improve the flood model input, thus resulting in a higher accuracy of flood modeling results. However, LiDAR data also face several difficulties that need to be addressed in the future regarding the filtering process for DEM generation and enormous point density data that need huge data storage, resulting in a longer computational time to simulate flood models. Additionally, integration between terrestrial and airborne LiDAR or any remotely sensed products seems to be a promising approach to solve the problems associated with the inadequate representation of topographic data in topographically complex areas [28]; hence, more investigation and research work for the expansion of LiDAR systems can be foreseen in upcoming applications of flood detection and monitoring.