Affect and Personality in Fibromyalgia

Fibromyalgia syndrome (FMS) is a chronic disorder characterized by widespread and persistent musculoskeletal pain, which is usually associated with other symptoms such as fatigue, tiredness, insomnia, stiffness, cognitive deficits, and emotional comorbidities (i.e., depression and anxiety). FMS patients usually display a high rate of psychiatric disorders compared to the general population. FMS has been also associated with higher levels of negative affect and lower levels of positive affect. High levels of stress, pain catastrophizing, and angry rumination have been also reported in FMS patients. Additionally, there are a tendency to internalize and suppress anger in FMS patients. Regarding personality in FMS, some studies have observed some FMS features (e.g., high impulsivity, harm avoidance, self-transcendence and neuroticism, and low conscientiousness, cooperativeness and self-directedness), while other authors had not found any particular personality trait. Some personality disorders (i.e., obsessive-compulsive personality disorder, borderline personality, avoidant personality disorder, and histrionic personality disorder) seem to be more frequent in FMS patients than in general population. Moreover, previous research has reported a greater presence of the type D personality and high levels of alexithymia in a significant proportion of FMS patients. It is necessary to improve the understanding of the role of affect and personality in the clinical practice with chronic pain patients, in order to improve the success of a personalized oriented treatment and increase their health-related quality of life.

Fibromyalgia syndrome (FMS) is a chronic disorder characterized by widespread and insistent musculoskeletal pain.[1] Its prevalence in the general population has been estimated around 2 to 4%.[1] FMS has been traditionally considered more predominant in women than men (between 61 to 90%), although recent studies suggested that this disproportion may result from biases studies.[2][3] With respect to FMS pathophysiology, it remains unknown. One of the most accepted hypothesis is the presence of central sensitization to pain and impairments in endogenous pain inhibitory mechanisms.[4][5]

On the other hand, FMS is related to a high socioeconomic cost for the health system (more medical visits, diagnostic tests, and prescriptions) and the work-related field (less productivity, more sick leaves).[9][33]

In FMS, there is a prevalence not only of clinical but also emotional symptoms. In this sense, pain and emotions are closer in anatomic terms, given that they share some brain circuits [34][35] and have a common neural alarm system.[36][37] Therefore, it is necessary to improve the understanding of the role of emotion and affect in clinical practice, especially in chronic pain patients.

In addition, high levels of stress have been reported in FMS.[44][45][46][47][48][49] Furthermore, different studies have explored the relation between exposure to stressors (especially early stressors during childhood and puberty), alterations in mechanisms of the stress response, and the later development of FMS. These studies found alterations of the hypothalamic-pituitary-adrenal (HPA) axis and the sympathetic nervous system (see Table 2) in FMS and related conditions.[50][51] Furthermore, stress appear to contribute to the onset and worsening of psychiatric and somatic symptoms in FMS patients.[52] In addition, stress might elicit pain in FMS[44][48][53] suggesting the need to train patients in coping stress techniques. 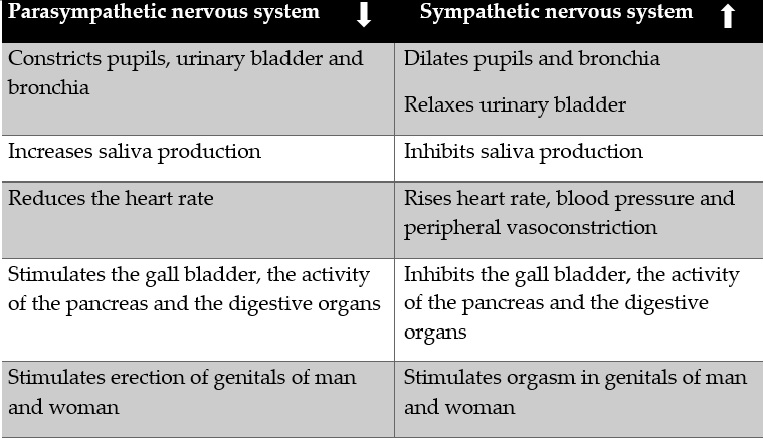 With respect to anger in FMS, studies have found higher levels of anger, especially angry rumination.[54][55][56] Anger rumination can be defined as a particular form of anger expression which implies perseverative thoughts about experiences of anger that emerge during and after the experience of a negative emotion.[57] [58] Anger rumination includes four different cognitive processes: I) anger afterthoughts (thoughts that keep anger and mentally review the anger incident), II) anger memories (provoked by injustices experienced in the past), III) fantastic thoughts about revenge and, IV) trying to understand causes (counterfactual thoughts focus on the causes of the anger-provoking event).[58] Anger ruminations is also associated with lower mental health and health-related quality of life in FMS, compared to healthy individuals.[56] In the same line, it has been suggested that FMS patients might use worry and rumination as dysfunctional coping strategies to deal with their negative emotions.[54]

Anger can be also divided into anger-in or anger suppression, and anger-out or anger expression through verbal or physical means.[59] In this sense, anger toward oneself (anger-in) seems to be greater in FMS than rheumatoid arthritis patients[60][61] and healthy participants.[61] Although chronic pain patients usually experience anger, some studies alert that anger in this population might be underestimated because of patients tend to deny anger in their lives,[62] especially women, due to social rules usually discourage anger expression in them.[63] Additionally, there are a tendency to internalize and suppress anger in FMS patients[55][60][64] which might be worsening their symptoms and health-related quality of life. Anger might also increase pain perception and could provoke pain-relevant physiologic reactivity and muscle tension,[65][66] which confirms the need to identify and treat anger in these patients.

Pain catastrophizing is another important aspect which is generally presented in FMS.[67][68][69][70] Pain catastrophizing can be conceptualized as a negative emotion-focused coping strategy used in the framework of pain, which implies an exaggeratedly negative orientation to pain that causes fear, uneasiness, concerns and despair[71] and might contribute to stablish a vicious circle of increased pain and associated symptoms in FMS. Magnification, helplessness and rumination are the three major dimensions of pain catastrophizing.[71] Previous studies have found that pain catastrophizing in FMS is associated with a decrease in health-related quality of life,[68] illness exacerbation, poor treatment outcomes, loss of functionality and chronicity,[67][69][70][72] and an increase in the use of analgesics and healthcare resources.[67][73]

Regarding personality in FMS, there are not consensus between experts. On the one hand, some studies have found characteristic FMS traits such as negative affect, neuroticism, alexithymia, etc.[40][74][75][76] On the other hand, other authors do not found any particular personality characteristic.[77][78] Personality studies in this field has been predominantly focus on three models: the Big Five Model of Personality, the Cloninger’s Personality Model and the Minnesota Multiphasic Personality Inventory profiles (MMPI).

Following this model, some researchers have found high impulsivity and neuroticism, and low conscientiousness in FMS.[79] Moreover, in some FMS patients the neuroticism might be accompanied by low levels of extraversion.[41][76] At the same time, lower levels of neuroticism have been related to more self-reported pain,[80] greater FMS and symptom severity, anxiety, depression and stress, worse mental component health-related quality of life, and lower self-efficacy and social support.[78] Extraversion in FMS has been previously related to lower pain, anxiety, and depression, and higher mental health-related quality of life.[78][81] Another study found that neuroticism and conscientiousness were significant predictors of pain catastrophizing, whereas neuroticism, openness, and agreeableness were significant predictors of pain anxiety.[82] A recent study has found that FMS patients were more agreeable and conscientious than general population and healthy participants.[83]

Related to the psychobiological Cloninger’s Personality Model (see Figure 1), it is focus on temperament and character.[84] Based on this model, some authors have reported in FMS high levels of harm avoidance and self-transcendence, and lower levels of cooperativeness and self-directedness,[45][85][86][87][88] together with persistence and reward dependence.[74] A decreased in novelty seeking has been also found in FMS patients.[89] Previous studies have shown that high harm avoidance and low self-directedness are personality features in chronic pain patients, for instance, in FMS, migraine, temporomandibular disorders and trigeminal neuropathy.[90][91] Therefore, it would be necessary to assess this personality dimensions in clinical practice to tailor treatments and better understand the disease experience of chronic pain patients. 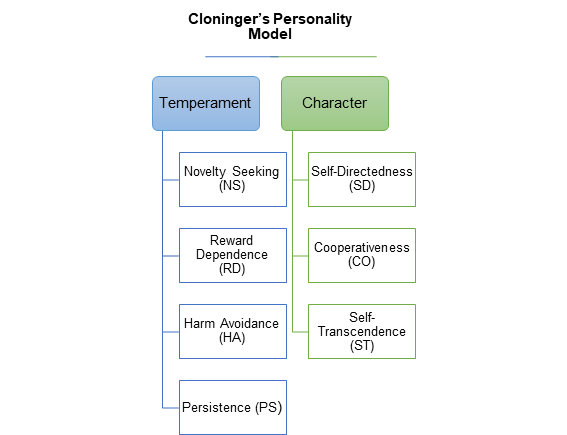 The Minnesota Multiphasic Personality Inventory profiles (MMPI) have been other common questionnaire used in FMS. Based on this instrument, some researchers have found a different and worse personality profile in FMS compared to healthy participants.[75][92][93][94] Some authors have suggested that the FMS profile was characterized by more physical/functional limitations and psychosocial difficulties compared to other pain diseases, such as upper extremity pain, cervical pain, thoracic pain, lumbar pain, lower extremity pain, and headache.[95] A predominance of the psychosomatic profiles was also reported in FMS.[96] It has been also shown high levels of introversion, neuroticism and depression in FMS using this instrument.[96][97]

Type D personality appear to be more frequent in FMS than in general population[103][104][105] and cardiovascular and chronic pain patients.[105] The distressed type, or Type D personality, can be conceptualized as a combination of tendencies to experience negative emotions (negative affectivity) and to inhibit their expression owing to fear of disapproval (social inhibition).[106] Additionally, Type D personality in FMS has been associated with a poorer mental and physical health,[103][105] higher FMS severity, pain severity, fatigue, decrease in functional status and health-related quality of life,[105] and a less adaptive pattern.[74] In other research, Type D personality has also related to social phobia, dysthymia, and compulsive and/or avoidant personality disorders.[104]

Patients with FMS also exhibit high levels of alexithymia.[107][108][109][110][111][112] Alexithymia can be defined as a personality trait associated with difficulties in the cognitive processing of emotions which implies a lack of emotional awareness, troubles in identifying and communicating feelings and an externally oriented thinking pattern.[113] Different researchers have found in FMS associations between alexithymia and increased pain severity and disability and reduced health-related quality of life,[110][111][114] greater levels of depression,[112] and more cognitive deficits.[39] Alexithymia also has a negative influence on physical and mental components of health-related quality of life, through the mediation of depressive symptoms.[115] In addition, alexithymia (specifically difficulty identifying feelings factor) appear to be a significant predict of the affective dimension of pain, and this relation between alexithymia and affective pain seems to be mediated by the effect of anxiety.[109]

The research about personality in FMS need to continue in order to better understand the disease and propose more adjusted treatment. The relevance of personality studies in the context of chronic pain might be explained through the integrative biopsychosocial model, in which psychological aspects (i.e., personality) might act as predisposing factors to FMS.[40][49][116] Moreover, FMS patients who have personality disorders and/or negative personality traits, generally get worse results after pain treatment,[117][118] have a worse psychological health and poor social relationships,[119] and have a greater consumption of medical and socioeconomic resources.[101][119] However, it is necessary to keep in mind that FMS patients are probably a heterogeneous group regarding personality and psychopathology profiles.[97]

To sum up, pain and emotions are closer in anatomic and psychological terms. Therefore, it is necessary to improve the understanding of the role of emotion and affect in clinical practice, especially in chronic pain patients. It is well known that negative emotions could increase nociception,[34][120] hypervigilance, worry about symptoms, misinterpretation of arousal from somatic sources, and inadequate behaviors and coping strategies, for instance, avoidance.[16] It is also important to take the personality of FMS patients into account, because personality appear to facilitate the conversion of daily situations in stressors, which activate physiological responses and exacerbate FMS symptoms.[40] Based on the diathesis-stress model of illness, it is widely accepted that personality and psychopathology traits may become individuals more vulnerable to stressors and make the activation of patients’ vulnerabilities easier, contributing to the onset, development and maintenance of FMS.[121] Therefore, FMS treatments can be more effective if they are adjusted to FMS patients’ characteristics. In fact, the recommendations of the European League Against Rheumatism (EULAR) for FMS insist that treatments should be tailored to the specific needs of each FMS patient and to involve psychological therapies, especially for mood disorders and negative coping strategies.[122]