Fabrication of biomaterial that mimics a suitable biological microenvironment is still a major challenge in the field of periodontitis treatment. Hence, in this report, we presented for the first time the fabrication of a novel biomaterial 3D matrix using collagen combined with sodium alginate and titanium oxide (TiO2) to recreate the in-vivo microenvironment and to act as a platform for the culture of human periodontal ligament fibroblasts (HPLF) towards osteogenic differentiation.

Periodontal disease (periodontitis), usually due to trauma or bacterial infection, is characterized by the destruction of the periodontal tissues including the gingiva, periodontal ligament, cementum, alveolar bone and other supporting periodontal connective tissues [1]. Not only periodontal tissue damage, periodontitis also closely relates to other systemic disorders such as cardiovascular disease, metabolic syndromes and diabetes. It is one of the most prevalent diseases in humans and the main pathogenic cause of adult tooth loss, affecting oral function and quality of life [2]. Therefore, the treatment for periodontal disease is widely concerned both in clinical and basic research. The ultimate goal of periodontal therapy is the regeneration of the original architecture and function of the periodontal complex [3][4].
Tissue engineering and stem cell therapy are the most emerging techniques for the complete regeneration of periodontal tissues [5][6][7]. Tissue regenerative techniques have been employed over a few decades to recover from periodontal tissue infections. For this purpose, various surgical procedures using enamel matrix, guided tissue and grafting materials have been established. In addition, several new strategies such as growth-factor therapies, stem cell therapies and cell-3D matrix-based therapies are recently proposed [8][9][10]. However, the unpredictable and incomplete restorations of actual periodontal tissues are the major limitations in this field [11]. One of the major limitations of periodontal tissue regeneration is the perfect spatiotemporal coordination of biomaterials that interact with multiple hard and soft tissues. Therefore, it is necessary to develop the regenerative biomaterials comparable to the target tissues [12]. 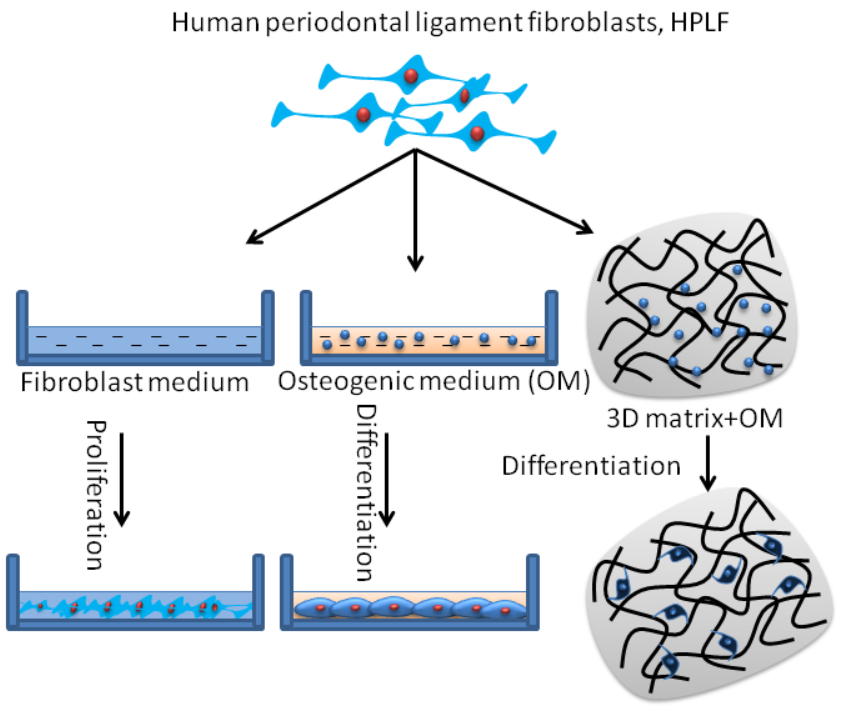 The choice of building biomaterials for 3D matrix fabrication depends on the purpose of application in a biological system. In that sense, biomaterials such as TiO2, collagen, and sodium alginate are the most appropriate biomaterials to fabricate the 3D matrix for periodontal regeneration, due to their promising effects in periodontal repair. Considering the above concept, for the first time, the 3D matrix was fabricated using the mixture of collagen, TiO2 and sodium alginate and investigated their physicochemical, rheological properties and their effect on osteogenic differentiation of human periodontal ligament fibroblast (HPLF) cells for periodontal impairment. We also investigated the morphological changes of HPLF cells before and after osteogenic differentiation using 2D and 3D culture systems. 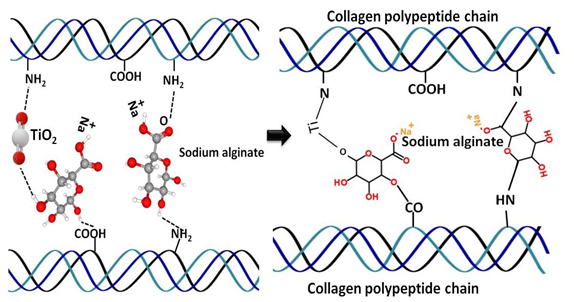 In the present study, collagen was crosslinked with TiO2 and sodium alginate to fabricate the 3D matrix. It was speculated that the functional groups such as amino groups and carboxyl groups of collagen might couple with the hydroxyl group of alginate and oxygen group of TiO2 during the fabrication of the 3D matrix [13][14][15][16][17]. The physicochemical and rheological properties such as stiffness, shrinkage factor, water binding capacity, swelling, porosity and biodegradation of CB3D matrix were comparatively similar to the previous reports [18][19][20][21]. Most specifically, previous studies reported that the collagen 3D matrix combined with alginate and poly(caprolactone) had stiffness of 30 and 4.0 MPa, respectively [22][23][24]. It is recommended that the ultimate 3D matrix should have comparable strength to cortical bone, with stiffness close to 7–30 MPa [25][26][27], which apt to the stiffness of CB3D matrix. In general, 3D matrix requires properties like suitable stiffness, porous, biocompatibility, degradation rate and microstructure to support proper cell growth and metabolic functions [28]. Many studies stated that the most highly porous biomaterials with high mechanical properties favor more bone cell growth with collagen [29][30]. In the present study, the CB3D matrix had good porosity, mechanical stiffness and prolonged degradation, which make them an ideal 3D matrix for tissue engineering application.
In our preliminary studies, we found that the HPLF cells cultured on CB3D matrix without osteogenic inducers could not differentiate into osteoblastogenic cells as confirmed by alkaline phosphatase, alizarin red staining and mRNA expression (Supplementary Figs. 2–3). Since, there were no significant differences between 2D and 3D culture of undifferentiated HPLF cells, the cells grown in the 2D culture plates were considered as a control in this study.
Though there was no significant difference observed in cell proliferation among groups, the alkaline phosphatase and osteocalcin levels were increased in CB3D matrix cultured cells than other groups. Previously, Murakami et al. reported that the alkaline phosphatase positive HPLF cells expressed higher mRNA levels of osteocalcin and bone sialoprotein than that of alkaline phosphatase negative HPLF cells due to higher expression of FGFR and TGF-beta receptor [31].
Interestingly, the control HPLF cells cultured without osteogenic inducer also secreted alkaline phosphatase on day 21, which was comparatively higher than the earlier culture on day 1. These data revealed that the undifferentiated HPLF cells also secrete a certain amount of alkaline phosphatase but not osteocalcin. To support this finding, an earlier study already proved that HPLF cells secrete alkaline phosphatase similar to human alveolar bone cells and the secreted amount was increased by 7.5-fold in presence of 1,25 (OH)2-vitamin D3 [62]. To the best of our knowledge, the undifferentiated HPLF cells could not secrete osteocalcin, however, they do secrete osteocalcin when they become differentiated osteogenic cells (Fig. 8). This hypothesis was also confirmed by alizarin red mineral staining (using histochemistry), gene (using RT-PCR) and protein (using western blot) expressions of this study.
As discussed earlier, the histochemical analysis of alizarin red mineral staining in osteogenic induced groups shown positive deposition, which was mainly due to the presence of calcium, however variation in the pattern of deposition was observed in 2D and 3D cultures. More specifically, 3D matrix cultured cells produced nodules with high-density areas that stained dark red, while 2D cells showed homogeneously spread deposition of mineral in a fiber-like pattern. However, no mineral deposition was observed in undifferentiated HPLF cells. A previous report showed that DPA cells from dental pulp tissue, SHED cells from roots of the deciduous teeth, PDL cells from the middle third of the root surface and SCAP cells from root apical papilla showed positive mineral staining after 21 days of osteogenic induction [32].
At the same time, CB3D matrix accelerated gene and protein expressions of collagen, osteocalcin and Runx2 in differentiated HPLF cells, which reveals that the CB3D matrix-supported osteogenic differentiation of HPLF cells through Runx2 signaling pathway. To support this finding, previous reports claim that the osteogenic differentiation of HPLF cells is regulated by phosphorylation of Runx2 via ERK 1/2 pathway [64], canonical Wnt/β-catenin signaling [33] and Runx2/Cbfa1/Osf2 pathway [34]. Interestingly, a recent study explained that the hydrolysed fish collagen from Tilapia scale treatment without any inducers upregulated osteogenic markers such as alkaline phosphatase, collagen I, Runx2 and osteocalcin, and the osteogenic stimulatory effect of hydrolysed fish collagen was intermediated by ERK signaling pathways [35]. Previous in vitro and in vivo studies have shown that the osteogenic gene and protein (Runx2 and OPN) expressions in HPLF cells were upregulated by bioactive glass-chitosan composite collagen membrane, and also confirmed the bone tissue regenerative capacity of this composite membrane in the furcation defect dogs [36]. In the present study, the osteogenic stimulatory effect was much pronounced in 3D system than 2D, which might be due to the resemblance of the 3D matrix as periodontal tissue that provides an actual microenvironment for the differentiation of HPLF cells.

The present findings demonstrate for the first time, undifferentiated HPLF cells could not secrete osteocalcin. CB3D matrix prepared with sodium alginate and titanium oxide could support the osteogenic stimulation of HPLF cells by accelerating collagen, alkaline phosphatase and osteocalcin through a RUNX2 signaling mechanism. Interestingly, this study revealed that osteogenic differentiation ability of inducers-treated HPLF cells was accelerated by CB3D matrix. Accordingly, the fabricated CB3D matrix with good osteogenic ability serves as a novel biomaterial for the treatment of periodontal impairment.