Subjects: Others
View times: 239
Submitted by:

TiO2 probably plays the most important role in photocatalysis due to its excellent chemical and physical properties. However, the band gap of TiO2 corresponds to the Ultraviolet (UV) region, which is inactive under visible irradiation. At present, TiO2 has become activated in the visible light region by metal and nonmetal doping and the fabrication of composites. Recently, nano-TiO2 has attracted much attention due to its characteristics of larger specific surface area and more exposed surface active sites. nano-TiO2 has been obtained in many morphologies such as ultrathin nanosheets, nanotubes, and hollow nanospheres.

Figure 1 is the crystal structure of three different TiO2 phases, and the differences in crystal structures are quite evident. Rutile TiO2 has a tetragonal structure (Figure 1b), and its {011} and {100} crystal facets have the lowest energy, therefore, its thermodynamically stable morphology is a truncated octahedron. Anatase has a tetragonal structure, and its c-axis is longer than the a-axis (Figure 1a). Anatase TiO2 also has a low energy crystal plane, which is the same as rutile, so it can show as a truncated octahedron. The brookite belongs to an orthorhombic structure, and its structural unit is relatively larger, which is composed of eight TiO2 units (Figure 1c). 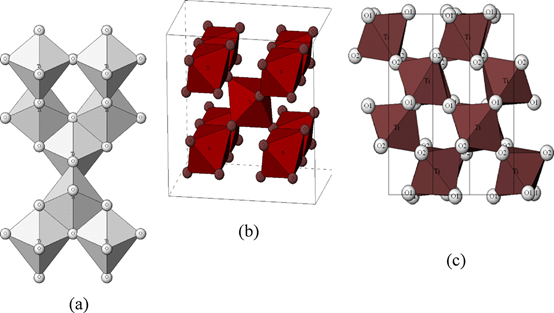 The energy level structure of semiconductor material contains two aspects: energy level position and energy band width. The position of its energy level determines whether the photocatalytic reaction can take place, and the energy band width determines its light absorption range. The position of the titanium dioxide energy level is decisive for the photocatalytic reaction. From a thermodynamic point of view, when the reduction potential of the reactant is lower than the conduction band of the semiconductor material, a reduction reaction can occur; whereas when the oxidation potential is higher than the valence band of the semiconductor material, an oxidation reaction can occur [5]. Taking the photolysis of water as an example, the generation of H2 is the process of reducing H+ by photogenerated electrons, while the generation of O2 molecules is the process of oxidizing O2− by holes. The energy band position of TiO2 is suitable for the photolysis of water, because the valence band of TiO2 (+2.7 V, pH = 7) is lower than the redox potential of O2/H2O (+1.23 V, pH = 7) and the position of its conduction band (−0.5 V, pH = 7) is higher than the position of H2O/H2 redox potential (−0.41 V, pH = 7) [6].

In addition to the position of the energy level, the band width also has a very important effect on photocatalytic performance. For example, the band width (3.2 eV) of TiO2 is wide, so it can only absorb ultraviolet light. It is only possible to use visible light when TiO2 is doped with some metals, non-metallic elements, or combined with other semiconductors with smaller energy band widths. For example, g–C3N4 has a moderate forbidden band width (2.7 eV), and its conduction band position is very high (−1.3 V, pH = 7) [7]. Therefore, the combination of TiO2 and g–C3N4 can improve the utilization of visible light.

A large number of studies have shown that the morphology of nanomaterials has a very important effect on photocatalytic performance, because the morphology usually determines the exposure of the crystal plane and active site, specific surface area, electron, and hole transport rate and other factors.

Zero-dimensional TiO2 nanomaterial has an isotropic structure and can expose all crystal planes (including those with higher energy), which is conducive to photocatalytic reactions. However, due to the quantum confinement effect, it has a larger forbidden band width and more surface defect states, making the photogenerated electrons and holes to have a higher recombination efficiency. If the surface can be properly modified, the recombination efficiency of electron-hole pairs can be greatly reduced, which is conducive to improving the photocatalytic performance of zero-dimensional TiO2 nanomaterials. This improved method has also been applied to many other zero-dimensional semiconductor nanomaterials such as carbon dots [8][9], CdS [10], CdSe [11], and graphene quantum dots [12][13].

The one-dimensional structure of TiO2 such as nanorods, nanowires, and nanotubes possesses a very fast charge transfer rate in a single direction, and the electron-hole pair has a relatively low recombination efficiency, making it an important research object for photocatalytic reactions [14][15].

Macak et al. [20] successfully prepared idealized TiO2 nanotubes by anodizing a Ti substrate with a glycol electrolyte containing NH4F and exploring the oxidation conditions (Figure 2a–c). The presence of hexagonal nanotubes can be clearly seen from the entire layer, arranged in neat rows, with each nanotube remaining hexagonal from top to bottom. The lower wall thickness was about 65 nm and the upper wall thickness was about 12 nm. The diameter of the internal pipe increased gradually from about 50 nm to 110 nm.

The submicron scale hollow sphere of TiO2 not only has a large specific surface, but also has a size near the wavelength of UV–Vis. Therefore, in theory, diffraction and reflection caused by shell structure on the hollow sphere can improve the utilization rate of light [22]. In the presence of cationic polystyrene sphere (PS) templates, Yoshihiko Kondo et al. [23] prepared submicron hollow sphere TiO2 by hydrolyzing isopropyl titanate (Figure 2e). Uniform anatase TiO2 hollow pellets with a diameter of about 490 nm and a shell thickness of about 30 nm were obtained. The resulting surface area measured by Brunauer–Emmett–Teller was 70 m2/g. The photocatalytic properties were tested by the decomposition of isopropanol under ultraviolet light.

Shuai Chen et al. [24] prepared anatase TiO2 nanorods by electrospinning and roasting. As shown in Figure 2f, the nanorods were observed to be 200 nm to 2 μm in length and 60 nm to 150 nm in diameter. The electrical properties of TiO2 nanobelts on curved surfaces with different curvature and their photoelectric properties under different light intensities were studied. The results showed that TiO2 nanobelts have potential applications in flexible photodetectors and solar cells. Due to its physical structure and good optical properties, titanium dioxide is considered to be a promising semiconductor photocatalyst, while nano-TiO2 has the advantages of large specific surface area and more exposed active sites, so it has better performance than TiO2. The important environmental applications of the nano-TiO2 photocatalyst were highlighted in this review such as hydrogen production, dye degradation, CO2 degradation, and nitrogen fixation. As reviewed here, a number of studies focused on making nano-TiO2 active in the visible light region by various methods such as doping of metals or nonmetals, manufacturing defects, and compounding of other semiconductors. So far, the successful application of nano-TiO2 photocatalysts in visible light has only been on a laboratory scale. Future research should focus on the use of novel nano-TiO2 photocatalysts (doped nano-TiO2 or composite nano-TiO2) for large-scale application.