Methotrexate (4-{N-[(2,4-diaminopteridin-6-yl) methyl]-N-methylamino} benzoyl)-L-glutamic acid, MTX) is an antimetabolite drug. It is widely used as a chemotherapeutic agent in rheumatoid arthritis (RA), psoriasis and some sorts of leukemia. MTX is a relatively well-known molecule and is a first-line antirheumatic medication because of its efficacy and safety. It decreases the concentration of tetrahydrofolate (THF) in the cells by the inhibition of dihydrofolate reductase (DHFR) enzyme, therefore it reduces the purine nucleotide and DNA synthesis.

Methotrexate (4-{N-[(2,4-diaminopteridin-6-yl) methyl]-N-methylamino} benzoyl)-L-glutamic acid, MTX, Figure 1.) is an antimetabolite drug. It is widely used as a chemotherapeutic agent in rheumatoid arthritis (RA), psoriasis and some sorts of leukemia. MTX is a relatively well-known molecule and is a first-line antirheumatic medication because of its efficacy and safety[1]. It decreases the concentration of tetrahydrofolate (THF) in the cells by the inhibition of dihydrofolate reductase (DHFR) enzyme, therefore it reduces the purine nucleotide and DNA synthesis[2]. Other mechanisms of action were also mentioned in the literature, including reduction of antigen-dependent T-cell proliferation, promotion of adenosine release and suppression of transmethylation reaction[3][4]. 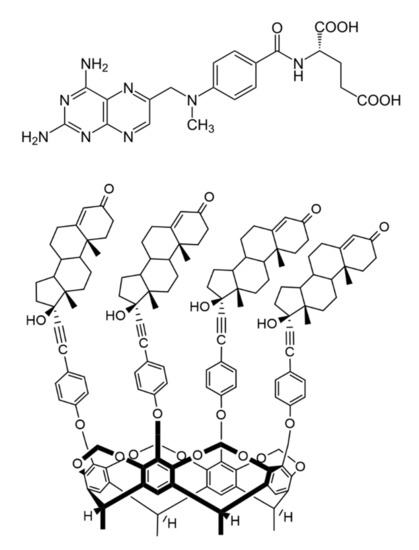 Calixarenes are cyclic oligomers that consist of phenolic units that are condensated in the presence of an aldehyde and linked to each other, typically through a methylene bridge, in an acidic environment[5][6]. They are widely used in supramolecular chemistry, separation science and catalysis. They also have pharmaceutical applications as host molecules[6]. Substituents appended to the phenolic rings (upper or lower rim) can greatly influence the physical and chemical properties of these molecules, but numerous derivatives have been synthesized that have functional groups on the periphery of the molecule, too[7]. Promising results have been described in the literature about calixarenes that have heterocyclic substituents on the periphery, they can be used as selective extractants for amino acids[8], chiral recognition agents[9] or chelators that trap metals[10]. Calix[4] arene-based P-ligands were used in rhodium-catalyzed hydroformylation[11].

Inserting additional methylene bridges between the phenolic oxygen atoms on adjacent aromatic rings, the structure is called a cavitand.

There is a wide range of literature available on the interactions between MTX and some macrocyclic compounds, e.g., cyclodextrins[12][13][14] and cucurbiturils[15], but just a limited number of researches were reported about the calixarene derivatives[16]. Moreover, no publication was found to describe the interaction of MTX with cavitands, despite that calixarenes and cavitands have some advantages compared with other host molecules, because they possess an aromatic cavity, which can embed MTX due to the π–π and CH–π interactions both inside and outside the cavity[16].

2. Spectroscopic Determination of the Association Constants

Absorption spectra of MTX and TAC (Figure 2A) show absorption maximum of MTX at 390 nm, while no considerable emission of TAC can be obtained at this wavelength. Accordingly, applying 390 nm excitation wavelength, emission spectra of MTX were recorded. Fluorescence spectra of MTX show increased emission upon increased concentration of TAC (Figure 3.). The enhancement of the PL signal can be described by two processes: (i) the guest MTX molecules loose the solvation shell reducing the quenching the PL signal induced by the solvent molecules, or, ii) the flexible MTX skeleton stabilized further by the TAC hosts and the reduced movements also support increasing the PL signal. Therefore, the changes induced in the spectra of MTX reflect interaction between the two molecules.

The stability constants of this interaction can be calculated using the Benesi–Hildebrand method. To determine the thermodynamic parameters, the stability constants were calculated at temperatures 293.15 K, 296.48 K, 299.82 K, 303.15 K, 306.48 K, 309.82 K and 313.15 K. Considering that the DMSO solvent shows considerable Raman peaks overlapping the emission of MTX, two methods were applied to confirm the complex stabilities: either the HyperQuad code was applied using 10 selected wavelengths around the emission maxima (470–480 nm, see Figure 2.) or applying the Benesi–Hildebrand method, the right leg of the emission spectra is used, where the Raman scattering is negligible. In this case intensities obtained at 540 nm emission wavelength were applied to evaluate the data. Table 1. summarizes these results. These stability constants were then used to calculate the thermodynamic parameters of the interaction (Table 2.).

Table 2. Thermodynamic parameters of the complex formation between TAC and MTX (ΔH and ΔS are the enthalpy change and entropy change, respectively).

Two different temperature regions can be observed on the van ’t Hoff plot (the logarithms of the stability constants were plotted against the reciprocal temperatures, Figure 4.) of the interaction where the thermodynamic parameters of the complex formation differ significantly. 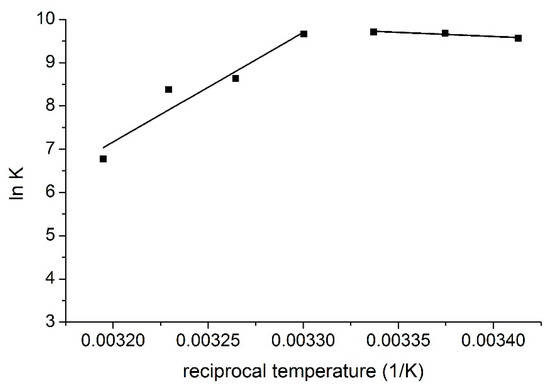 Figure 4. van ’t Hoff plot of the complex formation of MTX and TAC.

These results imply different complex formation mechanisms in the different temperature regions. At lower temperatures, entropy gain is associated with enthalpy gain, but at higher temperatures, entropy loss is associated with enthalpy loss. Based on these observations, it is suggested that in the lower temperature region MTX interacts with the ethisterone moieties of TAC, i.e., with the chiral inlet of the host molecule. In this way, the entropy gain is caused by the removal of solvent molecules, but this process costs energy, this is the reason of the moderated positive enthalpy change. However, in the higher temperature region MTX interacts with the rigid inner cavity of TAC, i.e., with the lower lying aromatic ’basket’, which causes entropy loss associated with the decreased freedom of the cavitand skeleton during complex formation. The negative enthalpy change reflects attractive interactions between the MTX molecules and the ethisterone arms of the cavitand.

The total energies of the species interacted were calculated first at semi-empirical AM1 level using Hyper Chem 8 code. The host cavitand molecule shows two stable conformers according to the orientation of the large ethisterone moieties on the upper rim (see Figure 5.): the opened structure associated with more flexible skeleton compared to the closed structure where the ethisterone moieties possess reduced freedom due to the steric hindering of their motion. The differences between the calculated total Gibbs free energies of the parent ’opened’ or ’closed’ molecules in gas phase (partition of solvent motions is excluded) was found to be 21.7 kJ/mole at 298.16 K, which property support presence of the opened structure exclusively at around room temperature. 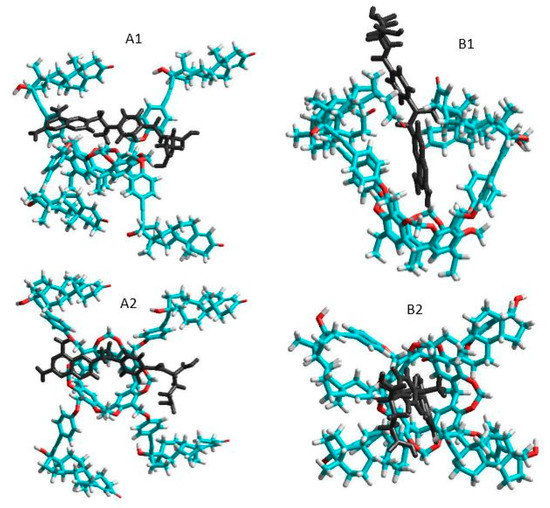 Figure 5. Side and top views of the equilibrium conformations of methotrexate–cavitand complexes associated with the opened (A1 and A2) and closed (B1 and B2) conformations of the cavitand (blue, red, white and black colors mean carbon, oxygen, hydrogen atoms and MTX molecule, respectively).

The thermodynamic parameters associated with the complex formation of the TAC with MTX were then calculated as described in the Materials and methods section. Results show positive enthalpy and entropy change during formation of the closed form complexes, while both the enthalpy and entropy term is negative when the complex show opened structure. Possible reason for these results is that the freedom of the flexible opened cavitand decreased considerably when the closed form complexes are stabilized. In contrast, the entropy gain can be obtained when the flexibility of the cavitand skeleton remains unchanged during formation of the opened complex structure. The good agreement between the experimental results derived in solution phase and that of the theoretical value calculated in gas phase reflects moderated entropy gain associated with the increased freedom of solvent molecules after leaving the solvation shell of the methotrexate guest.

Photoluminescence and molecular modeling studies of inclusion complexes formed by the antimetabolite drug, methotrexate and by the macrocyclic host molecule tetrakis(androst-4-en-3-one-17α-ethinyl)-cavitand highlight two temperature regions where the complexes possess different conformations: opened structure of the host cavitand with free androst-4-en-3-one-17α-ethinyl arms forms enthalpy stabilized structure while the stability of complexes formed by the closed form cavitand is stabilized by the entropy gain. This information can be applicable to design sensitive and selective molecular sensors for methotrexate drug.