Searches for light sterile neutrinos are motivated by the unexpected observation of an electron neutrino appearance in short-baseline experiments, such as the Liquid Scintillator Neutrino Detector (LSND) and the Mini Booster Neutrino Experiment (MiniBooNE). In light of these unexpected results, a campaign using natural and anthropogenic sources to find the light (mass-squared-difference around 1 eV2) sterile neutrinos is underway. Among the natural sources, atmospheric neutrinos provide a unique gateway to search for sterile neutrinos due to the broad range of baseline-to-energy ratios, L/E, and the presence of significant matter effects. Since the atmospheric neutrino flux rapidly falls with energy, studying its highest energy component requires gigaton-scale neutrino detectors. These detectors—often known as neutrino telescopes since they are designed to observe tiny astrophysical neutrino fluxes—have been used to perform searches for light sterile neutrinos, and researchers have found no significant signal to date.

In 1996, the LSND experiment published an intriguing result that suggested the possible existence of an extra, relatively light mass state involved in neutrino oscillations [1][2]. The hint of a still undiscovered fermion singlet beyond the standard model strongly motivated follow-up experiments. In 2013, the MiniBooNE experiment, which operated in both neutrino and anti-neutrino modes, also found a result that was inconsistent with the standard three neutrino picture [3] and compatible with LSND. Both LSND and MiniBooNE observed an excess of events with respect to eam background expectation. At the same time, a new calculation of the reactor neutrino fluxes put an overall tension of the total normalization for the reactor neutrino experiments [4]—the result was also consistent with the measurement from the GALLEX Cr-51 source experiment [5]. These overall missing events, both in reactors and radioactive sources, were also understood as evidence for a sterile neutrino.

From a phenomenological perspective, the main challenge is in accommodating the positive results of the appearance experiments with the constraints from the disappearance experiments. This general statement is unavoidable since the oscillation probability amplitudes in different channels are strongly correlated.

However, constraints from electron- and muon-neutrino disappearances are more susceptible to uncertainties arising from the mismodeling of the neutrino flux. This is not the case of neutrino telescopes, where the sensitivity relies on the fact that the matter potential enhances the disappearance probability at around TeV energies, making these analyses unique. This effect only exists if the observed excess of events is due to oscillation physics and does not apply if, for example, the excess is produced by the decay of a heavy state [14][15][22][24][30][31]. Models proposing this scenario would not be affected by the current IceCube bounds. However, this does not solve all the tension, and today, the global picture is hard to accommodate in a vanilla light sterile neutrino scenario. A more detailed review on the status of light sterile neutrinos can be found in Refs. [32][33][34][35].

2. Searches with Atmospheric Neutrinos below 100 GeV in Neutrino Telescopes

Figure 1. Summary of the constraints on light sterile neutrinos from atmospheric and accelerator neutrino experiments. In this figure, the lines are valid for mass-squared-differences greater than 1 eV2. The orange star corresponds to the best-fit point obtained by the ANTARES collaboration (ANT). Reproduced from [36].

3. Searches with Atmospheric Neutrinos above 100 GeV in Neutrino Telescopes

As previously discussed, at energies above 100 GeV, light sterile neutrinos undergo a resonant conversion due to the presence of matter effects for parameters compatible with the MiniBooNE and LSND observations [37][38][39][40][41][42][43]. Two analyses have been performed by the IceCube collaboration to search for this resonant depletion. The first analysis searching for sterile neutrinos using neutrino telescope data was performed by IceCube and published in 2016 [44]. This analysis used approximately 20,000 muon-neutrino events to search for muon-neutrino disappearance due to a light sterile neutrino. The second such analysis was recently unblinded and used approximately 300,000 muon-neutrino events taken over eight years [45][46].
The main difference between these two analyses is the following. First, the event selection of the new analysis was made more efficient than the previous while maintaining a similar level of purity. Second, the treatment of systematic uncertainties was improved compared to the first analysis; all systematic treatments are discussed in [45]. The most impactful systematic change was an improved treatment of the atmospheric neutrino uncertainties.
Previously, this was incorporated by performing the analysis using different, discreet atmospheric neutrino models. The more recent analysis allows continuous changes in the atmospheric neutrino flux. The uncertainties on the atmospheric neutrino flux have two origins: the hadronic interactions models that dictate the yield of the different mesons in the atmospheric shower and the uncertainty in the primary cosmic-ray spectra. The results of the last analysis are shown in Figure 2. 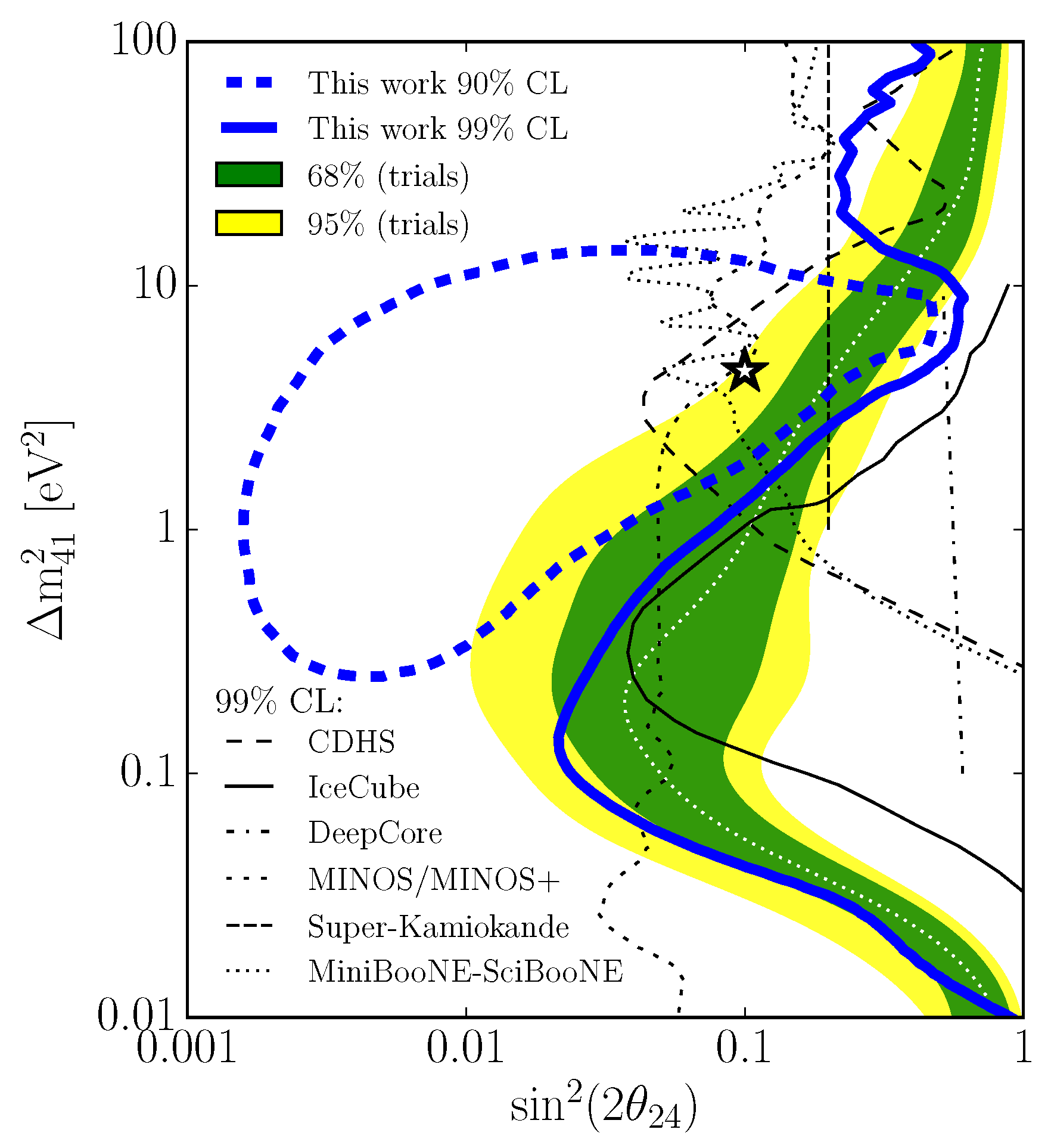 Figure 2. In blue solid (dashed): bound at 99% (90%) C.L. for the IceCube results of the search for sterile neutrinos [46]. To illustrate the results by CDHS [10][47], IceCube [44], DeepCore [48], Minos/Minos+ [49], Super-Kamiokande [7], and MiniBooNE-SciBooNE [3][9][50] are shown. The star marks the analysis best-fit point location. Figure from [46].
Beyond the main result shown in Figure 3, the IceCube collaboration performed an analysis looking for heavy sterile neutrinos motivated by hints seen in the one-year data set [51]. In the case of heavy sterile neutrinos—as discussed in the previous section—the primary observable is a unique shape in the angular distribution of the events. This analysis found no significant distortion due to a light sterile neutrino, and constraints were placed in the muon and tau-neutrino mixings, which were parameterized by a set of rotations, see [34] for the relationship between the angles and the mixing parameters. 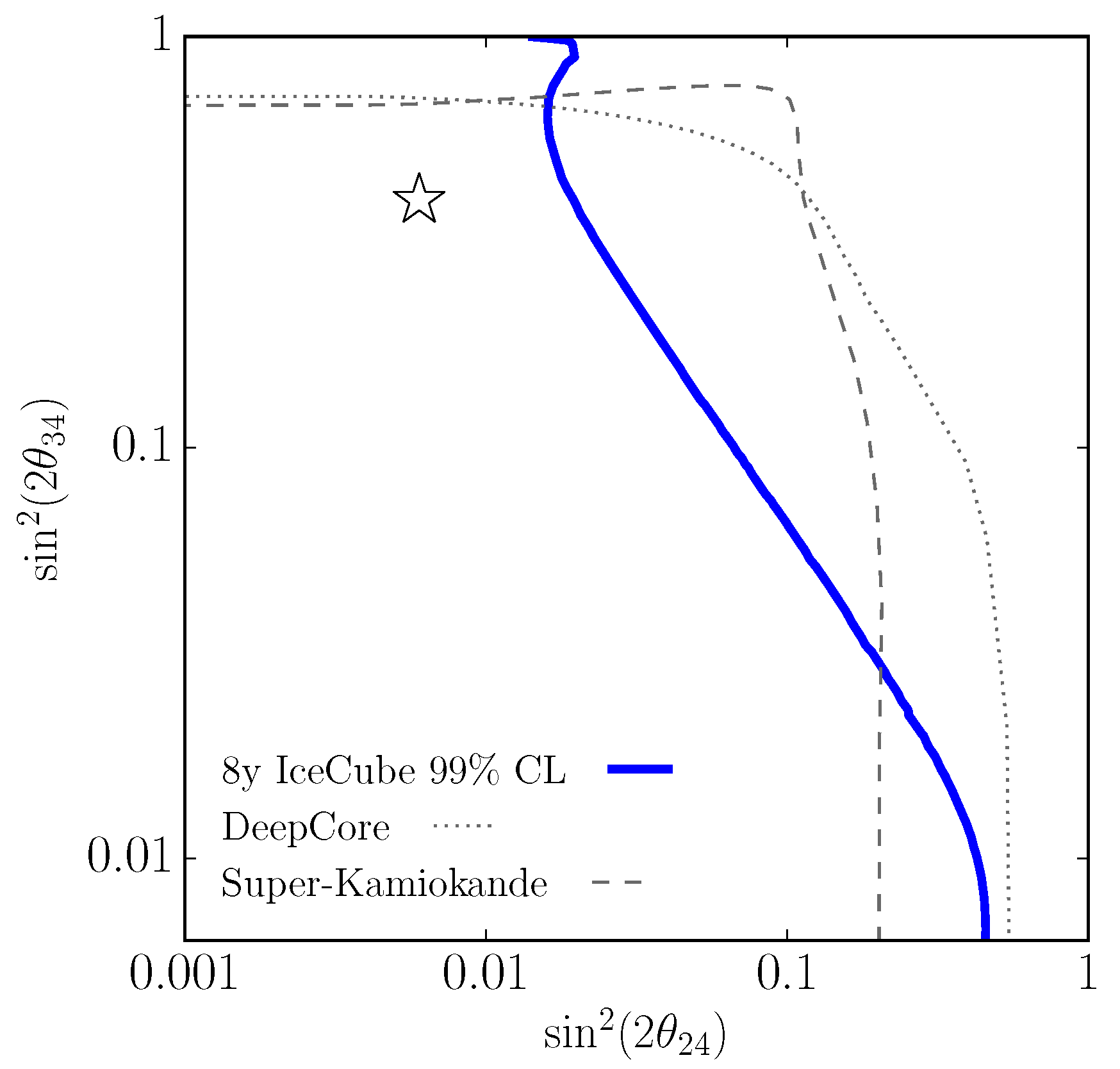 Figure 3. In blue solid: 99% C.L. exclusion in the regime of fast oscillations, i.e., heavy sterile neutrinos. The star shows the best fit, and results from other experiments are also shown [7][48].

Currently, the LSND and later MiniBoNE neutrino anomalies remain an open problem. Resolving this mystery will require experiments from different fronts, as each provides complementary information beyond the experiments discussed here, including ongoing and planned reactor measurements and accelerator-based experiments, such as the Fermilab short-baseline program [52]. In this scenario, neutrino telescopes provide a unique way to study light sterile neutrinos due to their sheer size. These gigaton-scale detectors can make precision measurements of the atmospheric neutrino spectra at the tens of GeV energy range while observing the high-energy part of the spectra.
The latter can access a unique signature in the search for light sterile neutrinos, namely the matter-induced-resonance disappearance, which, if observed, would provide a smoking gun for light sterile neutrinos. Finally, neutrino telescopes provide a new window to study the Universe with high-energy astrophysical neutrinos. The flavor composition of these neutrinos brings information on the neutrino mixing parameters making them sensitive to additional neutrino mass states. Given all of the above and the advent of new observatories, we expect that neutrino telescopes will continue playing a key role in resolving the light sterile neutrino puzzle.