Subjects: Others
View times: 1457
Submitted by:

To understand the impact of marijuana on the cardiovascular system, it is imperative to understand the endocannabinoid system. The endocannabinoid system (ECS) is comprised of the endocannabinoids anandamide and 2-arachidonylglycerol (both of which are endogenous lipid mediators), their metabolic enzymes, and G-protein coupled cannabinoid receptor 1 (CB1R) plus G-protein coupled cannabinoid receptor 2 (CB2R) [24]. CB1R is the primary receptor that mediates the effects of marijuana. CB1R is present in the brain, heart, vascular smooth muscle, and peripheral nervous system [6]. Its extensive presence in the human body makes its activation wide-reaching and impacts multiple systems.

The molecular mechanism of CB1R and CB2R signaling involves signal transduction via the modulation of adenylyl cyclase (AC), mitogen activated protein kinases (MAPK), and nuclear factor kappa light chain enhancer of activated B cells (NF-kb)[1]. CB1R stimulation causes the activation of adenylyl cyclase inhibitor subunit of G-proteins (Gi/o), resulting in reduced cAMP formation[2]. This in turn causes the inhibition of N-type calcium channels and activation of G-protein coupled inwardly rectifying potassium channels (GIRK)[3]. CB1R activation has also been shown to activate MAPK signaling pathways including p38, extracellular signal regulated kinase 1/2 (ERK1/2), and c-Jun N-terminal kinase (JNK), which are involved in cell proliferation, cell cycle control, and cell death. In addition to MAPK signaling, CB1R can activate the phosphatidylinositol-3-kinase (PI3K)/protein kinase B (Akt) pathway, which is responsible for cell growth and survival. CB1R can also signal via G-protein-independent mechanisms by associating with ß-arrestin. ß-arrestin plays a critical role in GPCR desensitization where it binds to the receptor and initiates the internalization process[3]. Interestingly, intracellular CB1R does not translocate but it can increase intracellular calcium through the release of internal lysosomal calcium stores[4]. CB1R located in the mitochondria can decrease mitochondrial respiration and cAMP formation, affecting cellular energy metabolism[5]. The dynamic nature of CB1R signaling results in different outcomes of CB1R activation, leading to either cell death or cell survival depending on the environment. While CB1R signaling is heavily studied, the role of CB2R in the cardiovascular effects of ECS is not well known.

2. Effects of Marijuana on the Autonomic Nervous System

The ECS affects both the sympathetic and parasympathetic nervous systems[6]. Smoking marijuana results in immediate tachycardia and elevated supine blood pressure. In a study done by Beaconsfield et al., an immediate effect of smoking marijuana is a 20–100% increase in heart rate. The effects on heart rate can occur within 10 min of marijuana inhalation and last between 2 and 3 h[7]. The increase in heart rate is mediated mainly by CB1R activation. In a study where a CB1-selective receptor antagonist was used, the mean peak heart rate increase was diminished by 59% in healthy volunteers who smoked marijuana 2 h prior to dosing[8]. Similarly, the use of propranolol before marijuana attenuated the tachycardia, further supporting the idea that cannabis-induced tachycardia is attributable to sympathetic nervous system activation[9]. In addition, marijuana can inhibit cardiac parasympathetic innervation, which is supported by the finding that marijuana reduces vagal slowing during the Valsalva maneuver[10]. Lastly, it has been hypothesized that marijuana-induced vasodilation stimulates reflex tachycardia, which is likely to be an additional mechanism for cannabis-induced tachycardia[11]. On the other hand, in animal studies, the use of a cannabinoid agonist resulted in bradycardia, hypotension, and a reduction in noradrenaline concentrations, indicating parasympathetic stimulation by ECS[12]. The biphasic effect of cannabinoids is likely to be dose-dependent as indicated by some studies, where lower doses caused sympathetic stimulation and norepinephrine release while higher doses resulted in parasympathetic stimulation[13][14]. The main physiological effects of marijuana could be summarized as an increase in heart rate, enhanced sympathetic tone, increased catecholamine levels at lower doses, and bradycardia/hypotension at higher doses[15][4][13]. All of these effects could serve as pathophysiological mechanisms for common cardiovascular events linked to marijuana use (Figure 1).

Postural hypotension and dizziness have been seen with higher doses of marijuana. Healthy volunteers who experience orthostatic hypotension after smoking marijuana have also shown evidence of decreased cerebral blood velocity when assessed by transcranial Doppler. The decrease in cerebral blood velocity can increase the risk of ischemic strokes and increase the likelihood of falls resulting in injuries[16]. An increased risk for falls poses an important concern regarding the effects of marijuana in the elderly, especially with the recently increased use among that population. 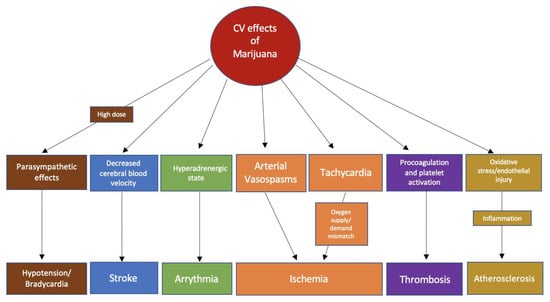 Figure 1. Possible pathophysiological mechanisms of the association of common cardiovascular events with marijuana use.

Marijuana use has been indicated to adversely affect the myocardial oxygen supply and demand. The combination of an increased myocardial oxygen demand as a result of tachycardia and a decreased oxygen supply as a result of high carboxyhemoglobin levels creates a supply and demand mismatch, which can result in transient myocardial ischemia[17]. Smoking marijuana causes an increase in the amount of carboxyhemoglobin due to combustion, which in turn causes a decrease in oxygen supply. Following marijuana use, cardiac output increases by 4% to 9%, with an increase in cardiac work[17][18]. In addition, marijuana use increases the sinus rate, decreases exercise-related cardiac performance, and decreases systemic vascular resistance[17][19][20][21][22]. Cannabis has also been shown to decrease the end diastolic volume, stroke index, ejection fraction, and left ventricular ejection time[11]. All of these effects combined support the notion that the cardiac effects of marijuana are mainly chronotropic. Moreover, in an isolated human atrial myocardial tissue, CB1R activation decreases myocardial contractile performance[23].

4. Effect of Marijuana on Thrombosis

Multiple case reports have linked marijuana to thrombus formation, leading to acute myocardial infarction in young adults[24][25][26][27][28][29]. The pro-coagulant effect of marijuana is attributed to the presence of CB1R and CB2R on human platelets. This effect is also due to an increase in the surface expression of glycoprotein IIb-IIIa and P-selectin after THC exposure[30]. Activated CB1R has been implicated in promoting endothelial dysfunction, an important factor in atherosclerosis development. CB1R stimulation in endothelial cells activates pathways including MAPK. MAPK activation, in turn, triggers the release of mediators that interfere with normal vasodilation and result in the release of reactive oxygen species (ROS). A study showed that CB1R induced a concentration- and time-dependent stimulation of MAPK, which promoted cell death[31]. Combined, these effects lead to endothelial dysfunction and a pro-coagulant state. A CB1R antagonist mitigated and almost reversed these negative effects in some studies[31][32].

5. Effect of Marijuana on the Inflammatory and Atherosclerotic Pathways

Marijuana has opposing effects on different receptors in relation to inflammation. CB1R activation has been implicated in the formation of oxidized low density lipoproteins (LDL) and the induction of an inflammatory response[10]. Studies focused on the effects of marijuana on CB2R have gained more attention in recent years. CB2R is expressed in immune tissue and hematopoietic cells; these receptors are upregulated in response to inflammation and tissue injury, linking them to anti-inflammatory effects[33]. Studies of human coronary artery endothelial cells have shown that CB2R agonists attenuate the pro-inflammatory processes triggered by CB1R activation[6]. The use of a CB2R agonist reduced oxidized LDL accumulation in macrophages along with other inflammatory markers implicated in atherosclerosis, suggesting that the activation of CB2R attenuates atherosclerosis. Thus, there has been significant interest in developing a selective CB2R agonist for the treatment of atherosclerosis[34]. There are multiple conflicting studies regarding atherosclerosis and marijuana use[32][35][36][37][38]. Current studies have, however, failed to demonstrate any direct impact of marijuana use on atherogenesis thus necessitating further investigation in this area.

6. Effect of Marijuana on Vascular Tissue

Cannabis has been shown to cause predominantly vasodilatory responses via the activation of transient receptor potential ankyrin type 1 (TRPA1) ion channels. However, vasoconstriction has been seen in coronary, cerebral, and peripheral arterial systems[39]. The contrasting effects of cannabinoids in different vascular tissues are attributed to the different endothelial vasodilator mechanisms in the tissues of interest. Myocardial blood flow, for example, has been shown to be inversely correlated with plasma levels of endocannabinoids[39]. In a study of an isolated mesenteric resistance vessel, THC was shown to inhibit the endothelium-dependent vasorelaxation. The same study demonstrated that THC produced vasorelaxation in aortic rings via enhanced nitric oxide availability, hydrogen peroxide production, and superoxide dismutase activity. The authors concluded that the effects of THC on endothelium-dependent vasorelaxation are dependent on the predominant endothelium-relaxing factor in a given artery, which subsequently results in a heterogenous effect of THC in different vascular beds[40]. Cannabinoids can also cause CB-receptor-independent vasodilatory effects by inhibiting voltage-gated calcium channels[1].