Hepatocellular carcinoma (HCC) represents a leading cause of cancer-related death, but it remains difficult to treat. Intratumor genetic and phenotypic heterogeneity are inherent properties of breast, skin, lung, prostate, and brain tumors, and intratumor heterogeneity (ITH) helps define prognosis and therapeutic response in these cancers. Several recent studies estimate that ITH is inherent to HCC and attribute the clinical intractability of HCC to this heterogeneity.

Hepatocellular carcinoma (HCC) is a leading cause of cancer-related mortality [1]. Regardless of etiology, HCC has few druggable targets, which makes treatment of advanced HCC challenging. Patients with early-stage HCC benefit from surgical interventions which can be curative, whereas late-stage patients are treated with locoregional treatments like chemoembolization and/or systemic chemotherapeutics. The multikinase inhibitor sorafenib extends survival by 4.3 months (95% CI, 4.0 to 5.6), and the combination of the vascular endothelial growth factor (VEGF) inhibitor bevacizumab and the immune checkpoint inhibitor atezolizumab extends overall survival by 6.8 months (95% CI, 5.7 to 8.3) [2]. Not only do these first-line chemotherapies only modestly improve survival, but molecular testing for guiding HCC treatment is used little, if at all [3], underscoring the need for new drug development strategies in HCC.
Intratumor heterogeneity (ITH) influences tumor progression, aggression, therapeutic resistance, and disease relapse across cancer types [4][5]. Although cancer was considered a clonal disease for several decades, ideas of genomic diversity within single tumors emerged in the 1950s [4]. Subsequently, mouse mammary tumor studies in the 1970s and 1980s documented phenotypic heterogeneity, with cells from different sections of the same tumor varying in growth rate, immunogenicity, ability to metastasize, and response to drugs [6]. The first studies demonstrating clonal interaction and cooperation emerged in the 1980s and 1990s [6]. The widespread use of next-generation sequencing (NGS) and other computational tools on multiregional and liquid biopsies have propelled in-depth investigation into the tumor type-specific and context-driven characteristics of ITH.

3. Clinical Consequences of ITH for HCC

ITH presents several challenges for HCC diagnosis, prognosis, and therapy. As demonstrated by Xue et al. [26], distinct lesions from a single HCC patient can possess different genetic landscapes, implying that molecular analyses of cells derived from single-region biopsies can misrepresent tumor properties, incorrectly biasing clinical decisions. Even in the case of solitary tumor nodules, single-region biopsies may not capture subclonal mutations that might serve as druggable targets or sources of potential therapeutic resistance. ITH is even more important to investigate in the setting of multifocal HCC as each focus can be composed of subclones, harboring potentially clinically relevant aberrations, as highlighted by Xu et al. [27]. Multiregional biopsies can be technically challenging to perform in solid tumors, and there is a relatively high risk of bleeding in HCC patients who usually have chronic liver disease.
Liquid biopsies are recent additions to efforts to measure ITH, leveraging the availability of circulating tumor cells, DNA, and/or T-cell antigen receptors. Since the release of these molecules into the bloodstream by tumors is not fully characterized or uniform, findings from these measurements may need to be interpreted with caution. However, Huang et al. found that more than 80% of mutations in TP53, TERT, and CTNNB1 in circulating tumor DNA were concordant with their status in paired HCC tumor tissue [28]. Future studies will be required to determine if more heterogeneous mutations such as those in PIK3CA are well-represented by liquid biopsy.
Following assessment of ITH, the prediction of how the identified ITH will impact clinical outcomes is not straightforward. Measurement of ITH results in a steep increase in the number of variables that need to be considered when building mathematical models to forecast clinical outcome. Recent efforts begin to address this computational challenge. The DARWIN clinical trial aims to evaluate whether targeting a clonal versus subclonal mutation with the anti-PD-L1 drug atezolizumab alters progression-free survival in patients with non-small-cell lung cancer (NCT02183883). Lin et al. [29] used the MATH algorithm to demonstrate that higher methylation ITH scores may indicate worse survival outcomes for HCC patients. Further studies directly investigating the relationship between ITH and patient outcome in HCC are critical to determine how widely the MATH algorithm can be applied and to developing improved models for predicting clinical outcomes based in ITH.
ITH plays a critical role in therapeutic resistance via various potential mechanisms, so careful consideration of ITH is helpful when formulating clinical strategies [5][30] (Figure 1). Tumor cells can develop drug resistance through genetic amplification of the therapeutic target, point mutations that affect the ability of the therapeutic to inhibit the oncogenic pathway, and/or amplification/inhibition of other genes that compensate for the drug-inhibited oncogene [31]. When devising treatment strategies for heterogeneous HCCs, it is important to consider that each cell within a single tumor could respond differentially to therapeutic stress via one or more of these resistance mechanisms. With treatment, pre-existing, undiagnosed, and untargeted ITH can result in the expansion of smaller subclonal population(s) as a result of positive selection, with the destruction of drug-responsive subclone(s) [5]. Alternatively, therapy can induce a subset of cells within the tumor to undergo resistance-conferring epigenetic changes [5]. Clonal cooperation is also thought to influence drug sensitivity [6]. In HCC, long-term treatment with sorafenib promotes epithelial-to-mesenchymal transition via the PI3 kinase/AKT-snail pathway in vitro [32], and tumors resistant to sorafenib upregulate insulin-like and fibroblast growth factor signaling pathways in vivo in animal models [33]. Further studies in animal models defining the degree of ITH in HCC before and after sorafenib administration will help elucidate which resistance mechanisms are most relevant to HCC and help determine how post-sorafenib ITH affects response to second-line therapies. 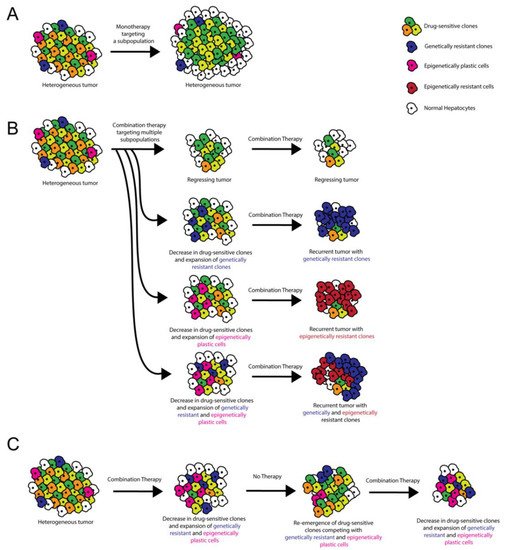 Figure 1. Role of ITH in targeted therapy resistance and treatment stratagem. (A) Monotherapies target a subset of tumor cells, resulting in incomplete tumor attrition. (B) Combination therapies target multiple oncogenic pathways, potentially resulting in tumor regression. However, recurrent tumors can occur when pre-existing ITH or ITH induced by cell–cell/cell–microenvironment interactions results in the emergence of genetically and/or epigenetically resistant clones. (C) Combination therapy administered with alternating periods without treatment allows for the disappearance and re-emergence of drug-sensitive clones. Competition between clones limits the emergence of resistant clones.