Human falls are a global public health issue resulting in over 37.3 million severe injuries and 646,000 deaths yearly. Falls result in direct financial cost to health systems and indirectly to society productivity. Unsurprisingly, human fall detection and prevention is a major focus of health research. In this article, we consider deep learning for fall detection in an IoT and fog computing environment. We propose a Convolutional Neural Network composed of three convolutional layers, two maxpool, and three fully-connected layers as our deep learning model. We evaluate its performance using three open data sets and against extant research. Our approach for resolving dimensionality and modelling simplicity issues is outlined. Accuracy, precision, sensitivity, specificity, and the Matthews Correlation Coefficient are used to evaluate performance. The best results are achieved when using data augmentation during the training process.

This article focuses on the falls detection and addresses calls for more research on the use of deep learning analysis in healthcare. We consider deep learning for fall detection in a IoT and fog computing environment. We propose a Convolutional Neural Network (CNN) model, which we label CNN-3B3Conv, and evaluate its performance (i) against extant research on fall detection using a Long Short-Term Memory (LSTM) approach, and (ii) using three different data sets. Accuracy, precision, sensitivity, specificity, and the Matthews Correlation Coefficient (MCC) are used to evaluate performance in experiments.

Figure 1 illustrates a use case for a IoT-enabled connected healthcare system for detecting human falls using a end device (embedded with an accelerometer sensor), a fog device, and deep learning. A user can have one or more IoT devices, for example a smartphone or smartwatch, that collect accelerometer data. This data is used to feed a trained deep learning model deployed in a local fog device. The IoT devices communicate with the fog devices through wireless technologies, such as IEEE 802.11, Zigbee, and Bluetooth Low Energy. In addition, the accelerometer data must be encoded using IoT communication protocols, such as Message Queue Telemetry Transport (MQTT) and Advanced Message Queuing Protocol.

The focus of this study is a deep learning model deployed at the fog device used to process the accelerometer data generated by the end user. We propose a CNN to extract relevant features from the data and detect if a fall occurred or not. Figure 2 presents the architecture of our CNN model, named CNN-3B3Conv. 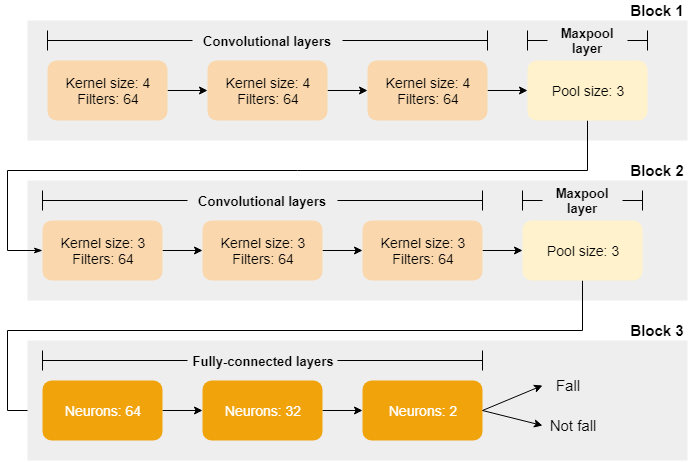 Experimental results suggest that the proposed CNN model, CNN-3B3Conv, using data augmentation presents better results for fall detection compared to LTSM-Acc and LTSM-Acc Rot. Similar to [1], we could demonstrate that apply data augmentation technique improves the deep learning performance, both in terms of accuracy and precision. Dimensionality issues hampered the use of multiple data sets for evaluation, highlighting the need for large standardised data sets for comparative research validation. Notwithstanding this, once the CNN model was modified, performance was improved albeit with a simpler CNN model, the CNN-1Conv.